Blue Air to open base #7 at Constanta; will station one 737-500 and serve eight routes, four of them domestic Seen announcing Blue Air’s new base at Constanta are: Decebal Fagadau, Mayor of Constanta; Gheorghe Racaru, CEO of Blue Air; and Tudor Constantinescu, CCO of Blue Air. Seen celebrating alongside Racaru, Constantinescu and Blue Air crew is Vlad Cristescu, Advertising and Brand Executive, Blue Air. The airline will operate eight routes from its new base and station one 737-500 at the Romanian airport.

The Romanian carrier Blue Air has been operating for almost 12 years and it has grown in that time to now offer 70 direct routes across Belgium, Cyprus, France, Germany, Greece, Ireland, Italy, Portugal, Romania, Sweden, Spain and the UK. The company currently has six operational bases, namely Bucharest, Bacau, Iasi, Larnaca, Turin and Cluj-Napoca, with the latter opening in October. On 5 September, the airline announced the home of its seventh base – Constanta Airport (also known as Mihail Kogalniceanu International Airport).

The carrier will base a single 120-seat 737-500 at the international gateway to the Romanian Riviera from 27 April 2017. Along with this investment, the airline will launch two new international routes to Rome Fiumicino and Paris Beauvais. A third international link to either Brussels or Stuttgart will be added as well, but both are still being reviewed to discover which is the most desirable. The investigation to finalise which is the best option is currently being discussed with various tour operators Blue Air can confirm to anna.aero. As well as linking Constanta to international destinations, Blue Air will further enhance its position within the Romanian domestic market by linking the Black Sea resort to Cluj-Napoca, Timisoara, Iasi and Oradea (new to Blue Air’s network). The rational to open these routes by the airline is due to them showing significant demand, especially in regards to leisure travel, for several years, yet they have not been served. Looking at its domestic presence, the airline already flies from Bucharest to Iasi and Cluj-Napoca, while on 1 October it will introduce a triangular route between Iasi, Cluj-Napoca and Timisoara. As a matter of fact, Blue Air tells anna.aero that it aims to further consolidate its dominant position in the Romanian domestic market.

Blue Air’s new routes from Constanta will face no direct competition. The airline tells anna.aero that it is committed to investing significantly in the Constanta region over the next few years, by stimulating both the market and Romanian tourism. Blue Air already operates to Constanta with a twice-weekly connection to both Milan/Bergamo (launched 2 May 2015) and Athens (4 June 2016) respectively. Looking at the airline’s current online timetable, Athens is not bookable for S17. What should also be noted is the fact that Blue Air will introduce charter flights to Tel Aviv, Bratislava and Beirut from Constanta in June next year. Overall, the airline will operate around 100,000 seats during S17 from its new Constanta base.

When referring to current OAG Schedules for S16, Blue Air is already the largest of the three carriers serving Constanta, with it occupying 39% of weekly seat capacity. Turkish Airlines, which serves the airport from its Istanbul Atatürk hub, has 38% of seats while Wizz Air, which links to London Luton, has 23%. Last year the airport handled just over 63,000 passengers according to the airport, an increase of 66% when compared to 2014. Nonetheless just under 95,000 were handled in 2012, so Constanta is not as busy as it has been in recent years. However, with this decision by Blue Air to open a base at the airport, it will hopefully help Constanta’s traffic grow to the highest it has been in recent history. 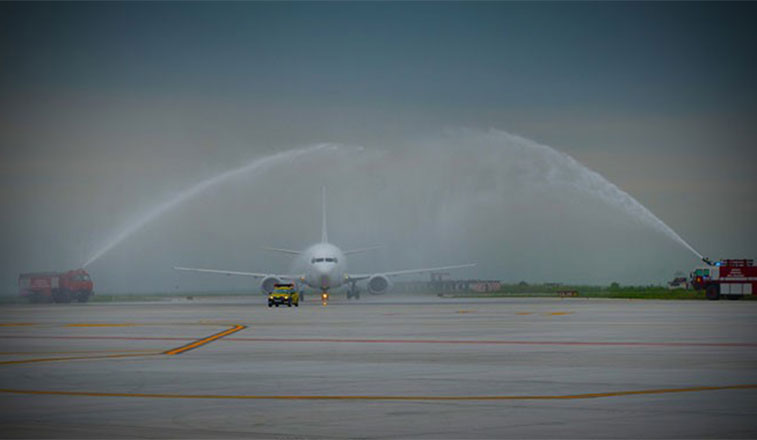 Blue Air first launched flights from Constanta on 2 May 2015 with a route from Milan/Bergamo, with the Romanian airport welcoming the airline’s arrival with this water arch salute. The airport’s firefighters will be practicing even harder to get that arch perfect when they have to perform this aviation art form to welcome the carrier’s first based aircraft at the facility next summer.