Aer Lingus resoundingly reclaims the title of ‘Fastest Airline in the World’ in the Budapest Airport-anna.aero Runway Run. 3 September 2016: 976 runners lined up at the start of this year’s Budapest Airport-anna.aero Runway Run, sponsored by Airbus and Qatar Airways. The air transport industry’s top charity sporting event was won by Aer Lingus in both team and individual categories officially making the Irish carrier ‘The Fastest Airline in the World.’

A determined team of 20 Aer Lingus runners raced down Budapest Airport’s Runway 13R-31L last weekend to resoundingly reclaim the title of ‘The Fastest Airline in the World’ in the air transport industry’s annual 10km charity race, beating a dozen other airline teams and snatching the title back from reigning champions SWISS.

In total 976 runners from airlines, airports and other aviation enterprises– including headline sponsor Airbus – lined up on the start line. As well as winning the most-coveted team prize, Aer Lingus also took the “double” as rapier-like team member Robert Murphy also crossed the line in first place with a 34-second lead, beating all other competitors over the 10km course – four lengths of Runway 13R-31L – to take the prize of ‘Fastest Aviator’ in a blazing time of 34:47 – the second time the 35-old Irishman has taken the title in his running career. The Aer Lingus CEO, Stephen Kavanagh (blue suit), himself a twice-veteran of the Budapest Airport Runway Run, personally stood on the Dublin Airport apron to greet the team’s victorious homecoming: “After the disappointment of losing the world’s fastest airline title last year, it’s even more satisfying to reclaim it in such style in 2016. Congratulations to all involved from across our airline in delivering a great team performance, you’ve done Aer Lingus proud and helped a great charitable cause along the way.”  As well as winning the most-coveted team prize, Aer Lingus also took the “double” as team member Robert Murphy (yellow shirt) crossed the line in first place taking the prize of ‘Fastest Aviator’ in a blazing time of 34:47. 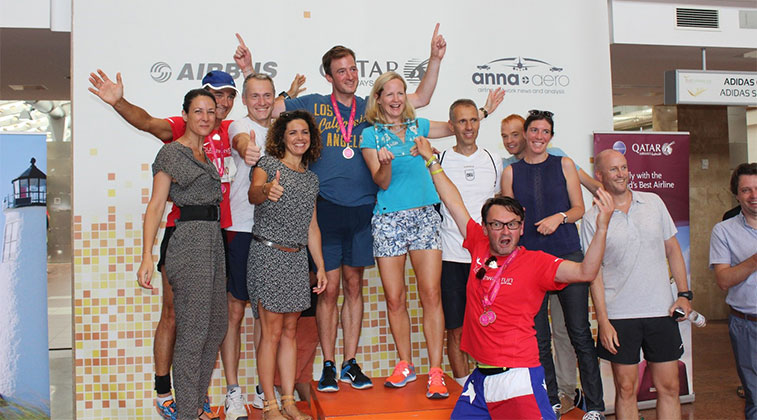 Headline sponsor Team Airbus, captained by Sinead Cormican, HO Contracts Europe, Africa & Pacific (holding trophy), genuinely ran fast enough to secure ‘The Fastest Aviation Enterprises Team.’ “It really wasn’t fixed! We were as surprised as everyone else – but they do have some really skinny people on their team” said anna.aero publisher, Paul Hogan, seen dancing for joy. 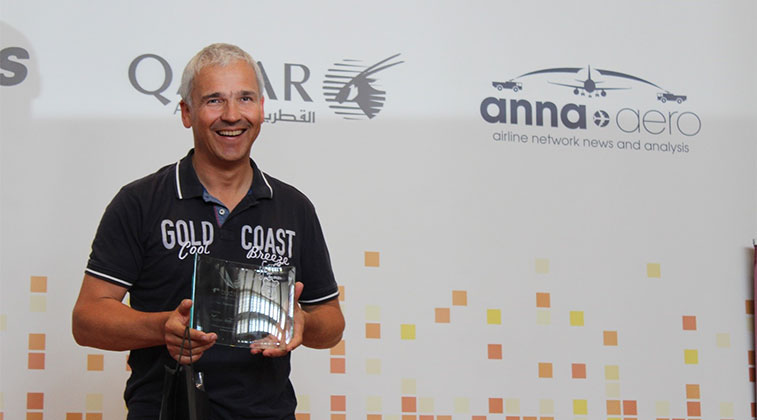 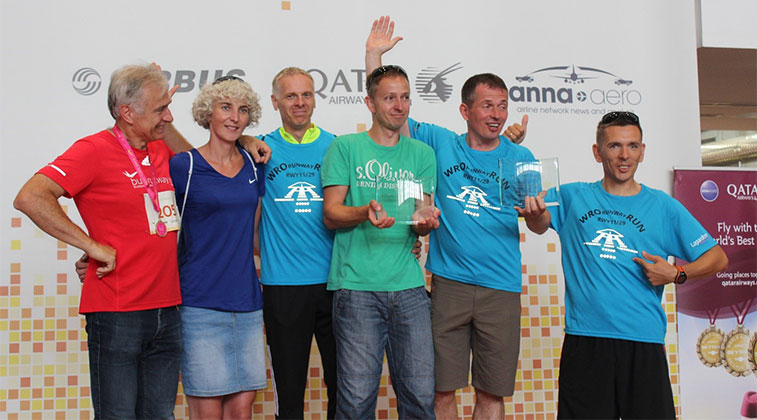 Wroclaw rocks! Holding on to its title of ‘Fastest Airport’ for a second year running, Poland’s Wroclaw Airport once again challenged several energetic airports from across Europe to retain its position at the top. 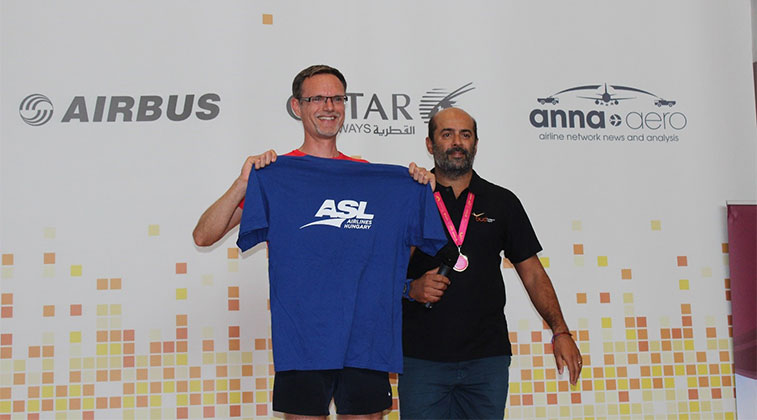 ASL Airlines’ Lászlo Molnár became this year’s ‘Fastest Airline CEO’ finishing in a blistering 46 minutes, receiving the recognition from Budapest Airport CCO, Kam Jandu, himself a 58 minute finisher. A track temperature of 35C transformed the event into a significant athletic challenge, even for multiple-marathon veterans like Jandu (who will run the New York Marathon in November). 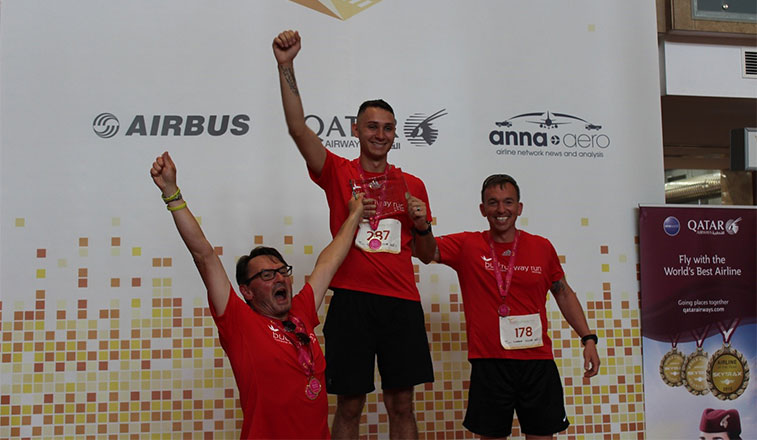 The ‘Fastest Military Aviator Prize’ went to Senior Airman Dustin Dixon, an aircraft loadmaster at USAF Base Ramstein. (anna.aero is very grateful to Lufthansa and Gábor Antal, Country Manager Hungary, for providing flights for the Ramstein runners who serve with the 37th Airlift Squadron within the 86th Airlift Wing. The fourth Budapest Airport Runway Run, co-organised with www.anna.aero, and sponsored by Airbus and Qatar Airways, took place on a normally extremely active runway (the airport has two) and involves closing runway 13R-31L for just a few hours in order to stage the air transport industry’s annual premier charity sporting event, held in aid of the bone marrow transplant charity, Anthony Nolan, and Hungary’s Suhanj! Foundation, a charity which supports the inclusion of disabled people in sport and a number of whom competed this year – all enthusiastically supported by the spirit of the Taiko Hungary drummers. 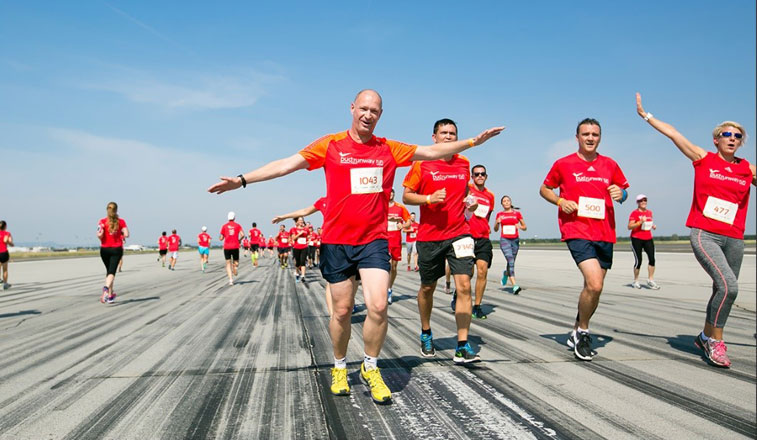 After flying down the runway, Budapest Airport’s CEO Jost Lammers (centre, outstretched wings) later addressed all runners in the prize-giving on the concourse of the airport’s historic Terminal 1: “It was a very hot race today with temperatures close to 35C on the runway – even the most experienced runners admitted that just finishing the race was a real athletic achievement. We are very proud of all our competitors for their part in making this a record-attended runway run – close to 1,000 runners from across the international aviation community took part helping to promote our airport and this fantastic city while allowing us to donate 100% of entrance fees to the benefiting charities. This event is firmly and truly established as a winning formula for all.” 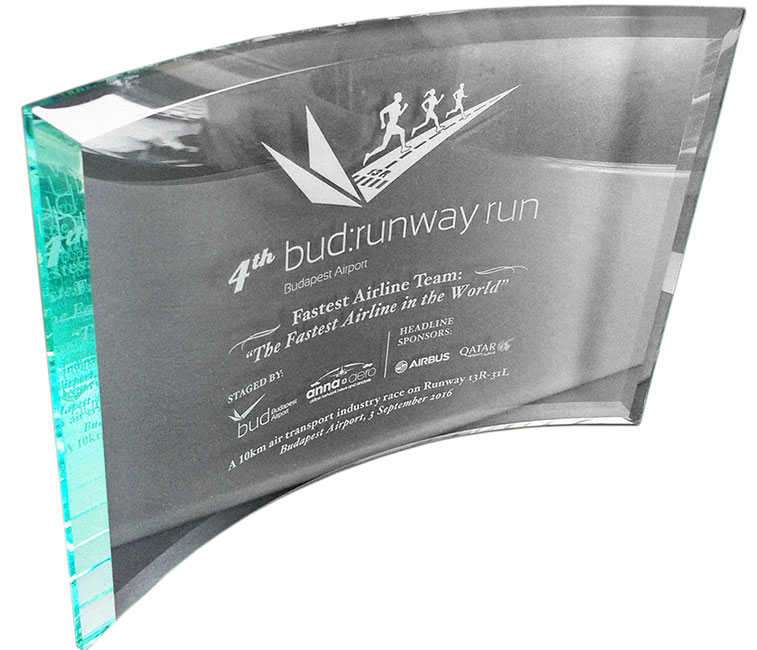 Budapest Airport-anna.aero trophies were awarded to: 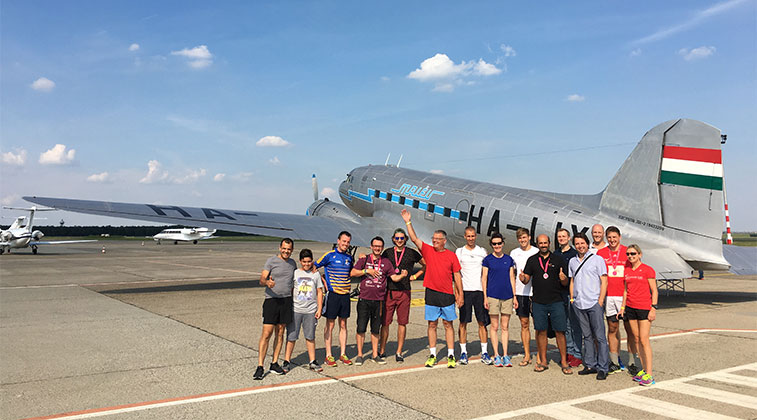 Aerial treat: To cap a spectacular day some lucky runners were invited for a pleasure flight over Budapest in a Li-2 – one of the last remaining Soviet-built versions of the DC-3. HA-LIX was produced in Tashkent for the Hungarian Airforce in 1949, moving to Malév in 1957, before retirement in 1973, only flying again in 2000 after a three-year restoration. While DC-3s are still in service worldwide this is the only Li-2 still in flying outside of North Korea! 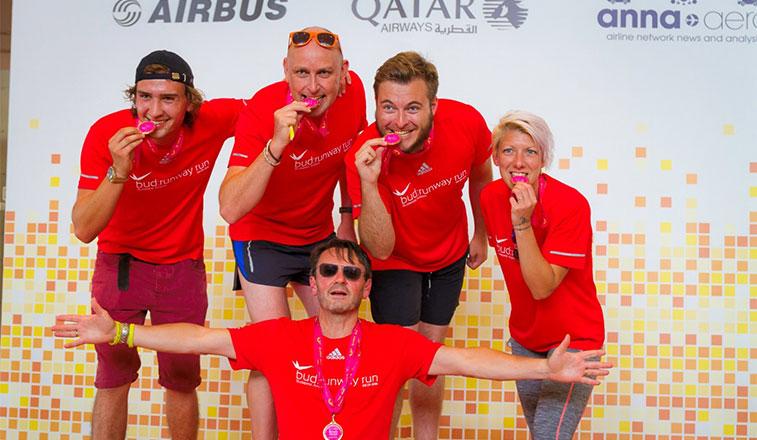 anna.aero’s own team, captained by publisher Paul Hogan, proudly bite their ‘Bron’s Medals’ – named for Brontë “Bron” Hogan, the late-12 year-old daughter of Hogan: “Brontë passed away in 2011 after a brave five-year battle with leukaemia during which she had two bone marrow transplants from a donor in Texas found by Anthony Nolan,” explained Hogan. “I am grateful to Budapest Airport, Airbus, Qatar Airways and all 976 sportsmen and women from the airlines, airports and air transport community who stepped-up to take part on the day – Bron would be honoured and you can wear your medals with considerable pride.”