Newcastle Airport traffic up 2.7% in first half of 2016; Ryanair gears up for rapid expansion; three domestic links no longer served Ryanair will increase its monthly seat capacity from Newcastle this winter by nearly 163%, with the airline adding flights to the UK city from Gdansk, Lanzarote, Tenerife South, Warsaw Modlin and Wroclaw. The airline will further expand from the UK airport next summer with the introduction of flights to Faro, Girona and Palma de Mallorca. Seen announcing some of the carrier’s new services are: John Irving, Business Development Director, Newcastle Airport; Robin Kiely, Head of Communications, Ryanair; and Leon McQuaid, Aviation Development Manager, Newcastle Airport.

Newcastle Airport serves the UK city of the same name, with the facility welcoming just under 4.6 million passengers in 2015, an increase of 1% when compared to 2014. This makes the airport the tenth largest in the UK. Newcastle itself has a population of nearly 290,000 (based on 2014 mid-estimates), with a population including its metro region (Tyneside) totalling 1.65 million. If we take this metro population into account, then for every resident in the city boundary, 2.8 passengers travel from the airport per annum. Newcastle’s economy contributes around £13 billion to the UK GVA per annum.

Between January and June this year, traffic at Newcastle rose by 2.7%. This represents a 55,967 net increase in passengers for the six month period. The average monthly growth in passengers for this year so far is 2.3%. Only one month this year has recorded a drop in traffic, with passengers down 0.8% in January. Since January 2010, 21 months (highlighted in light green) have recorded drops in traffic. 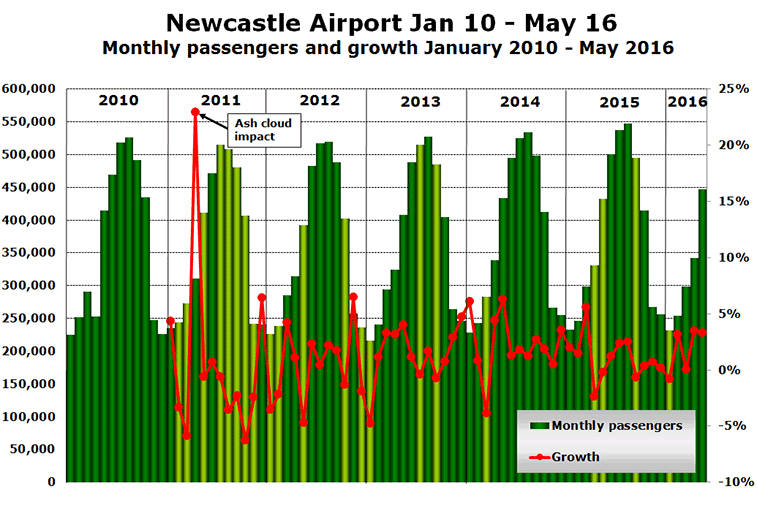 When we exclude the traffic jump witnessed in April 2011, a result of the ash cloud impact of 2010, the average monthly increase in traffic for the decade so far at Newcastle is 1.0%, showcasing that this year is growing at a higher average. The best month for growth during the period analysed was November 2012, with traffic up 6.5% when compared to the same month of 2011. The worst performing month was October 2011, when passenger numbers fell by 6.3% when compared to October 2010.

Putting Newcastle’s passenger statistics for 2015 into anna.aero’s Seasonal Variation in Demand (SVID) calculator, the airport performs not so well, with it garnering a score of 11.13 – a “Poor” rating. When looking at UK airports of a similar size, East Midlands (4.45 million passengers) scored 17.63 (also “Poor”), while Belfast International (4.39 million) scored 4.43 – a “Good” rating.

The connection between Newcastle and London Heathrow, served solely by British Airways, is the airport’s number one route. In 2015 the airport pair welcomed 513,496 passengers according to UK CAA (Civil Aviation Authority) data. For the first half of 2016 traffic on the route dropped by 3.4% when compared to the first half of 2015. During the period between January and June only two months have witnessed growth, with traffic up 4.0% in January and 2.1% in February respectively. 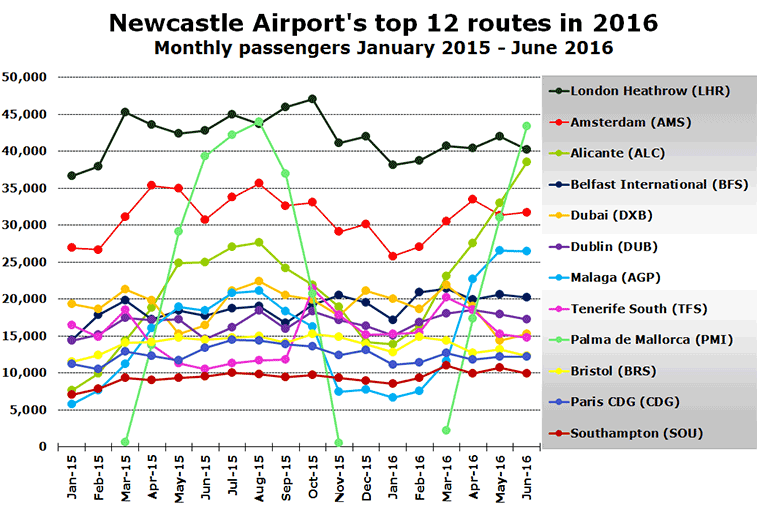 Of Newcastle’s top 12 routes, Alicante is the one which has welcomed the biggest net increase in traffic for the first half of this year, with the airport pair welcoming 51,723 additional passengers during the period between January and June. Each month during that time the route has welcomed double-digit growth, with January being the best performing when passenger numbers increased by 81%. One factor which has helped traffic surge on this particular sector is the arrival of Ryanair, with the Irish ULCC having launched flights between the two airports on 27 October last year. As well as Alicante, Malaga (23,396), Belfast International (14,526), Tenerife South (14,152) and Palma de Mallorca (11,150) have all welcomed a five-digit figure growth in passengers. Palma de Mallorca is the only route in the top 12 that does not operate year-round. From mid-November to March the sector is unserved. Despite it being a seasonal route, the link to the Balearic island was the most popular from Newcastle in June, with it carrying 43,393 passengers. It also achieved the feat of being the most popular route in August 2015 as well.

For the upcoming winter season, four new destinations will grace Newcastle’s departure boards. Berlin Schönefeld (easyJet), Gdansk, Warsaw Modlin and Wroclaw (all Ryanair) will be launched for W16/17. Currently Newcastle only has two year-round destinations in Eastern Europe, Prague and Krakow (both operated by Jet2.com). The former this winter is reporting an 8.5% drop in monthly seat capacity, while the latter is also showcasing a slump of 11% respectively.

Belfast City, Birmingham and London Stansted are three routes which have been dropped from Newcastle during the past year, all of them domestic connections. Flybe ended flights to Belfast City in May, while it ended its London Stansted operations in March. Eastern Airways cancelled Birmingham flights on 22 July.

Looking ahead to W16/17 by referring to OAG schedules, it is evident that the airlines leading expansion from Newcastle are Ryanair and Aer Lingus (highlighted in light green). The former has grown from being the eighth largest carrier at the airport last winter to third this year, while Aer Lingus has risen from 13th to tenth. This winter Ryanair will grow the number of destinations it links to Newcastle from two to eight. The airline last year flew to just Dublin and Alicante, but in S16 the carrier commenced flights to Malaga, while for W16/17 it will launch Gdansk, Lanzarote, Tenerife South, Warsaw Modlin and Wroclaw. The airline will further expand from the UK airport next summer with the introduction of flights to Faro, Girona and Palma de Mallorca.

The airport’s biggest carrier easyJet has had a base at Newcastle since March 2003. It has operated flights to a total of 28 destinations since then of which only 15 are currently being flown. Among the routes no longer served by the LCC are Amsterdam, Budapest, Copenhagen, London Gatwick, London Stansted, Menorca, Paris CDG and Prague. 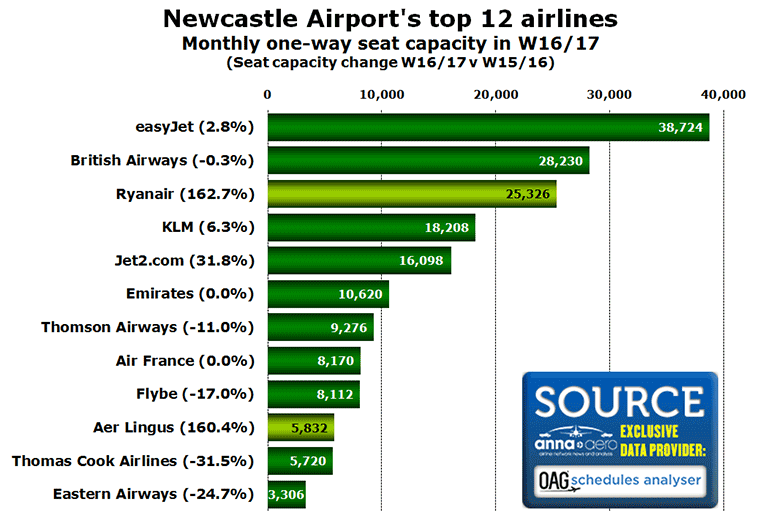 Vueling newest carrier in Newcastle as United Airlines bows out…

During the past 12 months the only new carrier to grace Newcastle is Vueling (16th largest airline). It commenced flights from Barcelona on 19 March. The airline competes directly on this route with easyJet, Newcastle’s largest airline this winter, with it occupying just over 20% of the airport’s monthly seat capacity. When comparing OAG schedules between this upcoming winter and last winter, the airport has lost two airlines from its roll call. Widerøe ended its flights between Newcastle and Stavanger earlier this year, though the city pair has now been taken over by bmi regional (14th largest airline), a carrier which has grown its seat capacity by 57% this winter. The other carrier not serving Newcastle in W16/17 is Germania which flew some operations for Thomson Airways.

Last summer United Airlines launched flights to Newcastle from New York Newark, the Star Alliance member’s seventh destination in the UK. However after two seasons the US carrier has decided to end the route. Nick Jones, Interim Chief Executive of Newcastle Airport said of the news: “We understand that this will be very disappointing news. We, United Airlines and our regional partners really have given the Newark route our best possible shot during its seasonal period of operation. Passenger numbers in 2016 have been higher than in 2015, but with great regret we understand United’s decision.” During its first season (May-September) the route carried 14,845 passengers according to CAA data, representing an average load factor for the first season of just over 56% when cross comparing data with OAG schedules. During May and June this year the route carried 6,172 passengers, while in the same two months of last year it carried 5,350. This represents an increase in traffic for the two months of 15%, confirming Jones’ statement. However, despite United ending services, it should be noted that Jet2.com does offer a seasonal programme of flights between Newcastle and Newark during the winter months. The US is also served directly by Thomson Airways which in the summer links the UK airport to Orlando Sanford. 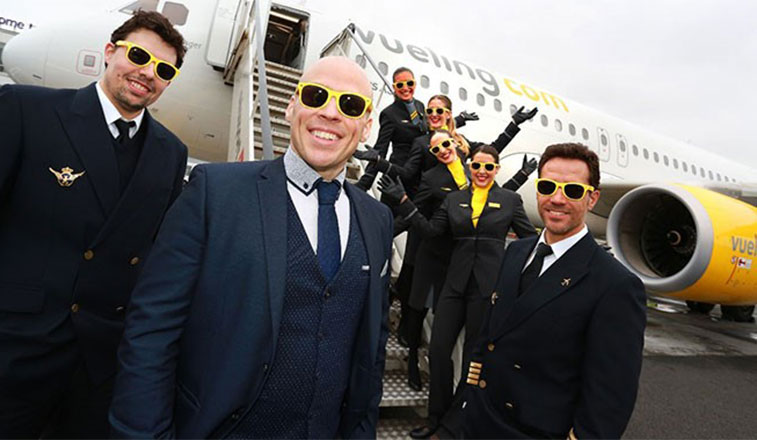 During the past 12 months Vueling is the only airline to have commenced flights to Newcastle, linking the UK city with Barcelona. Despite the arrival of Vueling, the airport has lost Germania, United Airlines and Widerøe from its airline roll call.