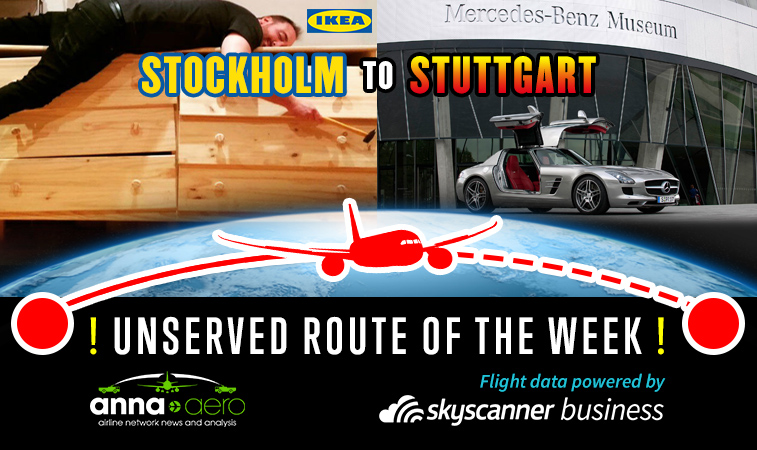 Two great engineering cultures with much to learn from each other ‒ just imagine the benefits of fitting your own gull-wing doors to your new Mercedes! Over 60% of the 110,000 searches made on Skyscanner for unserved Stockholm-Stuttgart services came from would-be travellers in the wealthy German car-making capital desperate to relieve their Stockholm syndrome.

With over 110,000 searches in the last 12 months, a potential new route from Stockholm to Stuttgart has been detected as this week’s “Skyscanner for Business-anna.aero Unserved Route of Week” – a powerful analysis based on aspirational data captured from the Skyscanner.net flight comparison site used by +50 million unique visitors per month. 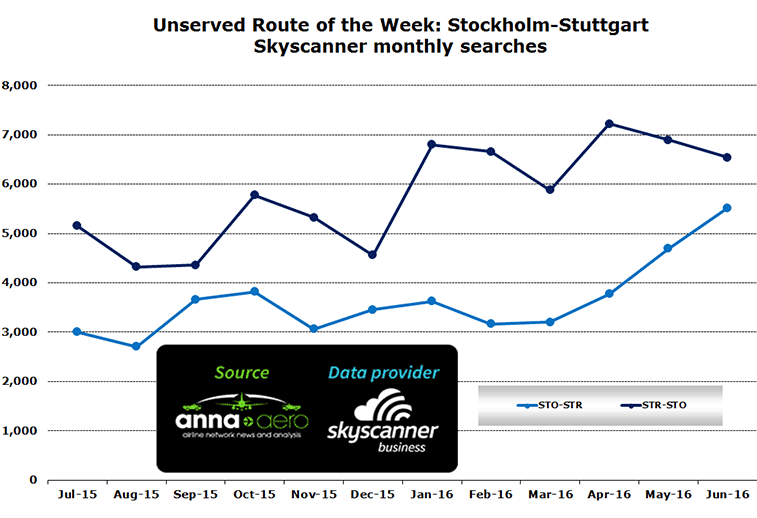 anna.aero recommends the route to germanwings or airberlin

With the traffic on this route indicating a 61/39 split in favour of the German city, the potential carriers at the Stuttgart end of the route were therefore considered first. The Lufthansa subsidiary germanwings is currently the largest carrier at Stuttgart, with a 31% weekly seat share according to OAG schedules data for the week commencing 6 September (Lufthansa itself has a 5.1% share). As Germany’s third largest carrier (in terms of weekly seats), germanwings does fly to Scandinavia from Stuttgart (it’s second biggest hub behind Cologne Bonn) – namely to Copenhagen, 23 times weekly – but it does not operate to any destinations in Sweden, Norway (or Finland) from Stuttgart. However germanwings does fly to the Swedish capital from some of its other German bases. It currently offers 11 weekly frequencies to Stockholm Arlanda from Hamburg, four weekly from Cologne Bonn and weekly from Düsseldorf – so clearly it has experience in this market which could be leveraged to begin a Stockholm to Stuttgart connection. A new business-oriented Scandinavia service to Arlanda next summer would also perfectly complement the carrier’s planned thrice-weekly leisure service from Stuttgart to Pisa, which starts end-March.

Stuttgart’s second largest carrier, airberlin (17% weekly seat share), does not currently operate any Scandinavian routes from Stuttgart. However, a bit like germanwings, it does have experience in the Swedish market from other German airports on its network. It flies four times daily from Berlin Tegel to Arlanda, as well as 26 times weekly to Gothenburg. Additionally it has a 20 times weekly service from Düsseldorf to Sweden’s busiest airport, so it does not require that much of a leap of network development faith for it to consider a link to Stockholm from its sixth largest operational base.

Contemplating the Swedish end of the route, and more specifically Stockholm Arlanda (as opposed to Stockholm’s other airports of Bromma, Skavtsa or Vasteras), SAS, with a 43% weekly seat share, is the unsurprising leading player at the Star Alliance carrier’s third biggest hub after Copenhagen and Oslo Gardermoen. The airline has lots of existing German services from Arlanda – 20 times weekly flights to Frankfurt; 11 times weekly to Hamburg and Düsseldorf; and 10 times weekly to Berlin Tegel. So again, our data elves believe that this should be a no-brainer for SAS, like germanwings or airberlin, given its existing operations in the market.

When looking at the previous year of search data, the busiest month for potential traffic flows (for both directions on the route combined) is June 2016, with over 12,000 searches, over 5,000 higher than the lowest monthly figure, which was recorded in August 2015 (7,000). The seasonality profile of this search data is significantly less extreme than last week’s Unserved Route of the Week (Chengdu to Düsseldorf), with the low-month traffic representing 58% of the highest month. According to OAG Traffic Analyser, because there is no direct service, the top three connecting options chosen by those passengers who did book travel between Stockholm and Stuttgart in the past year indicates that the majority of connecting passengers use Berlin Tegel (28%) Copenhagen (26%), and Frankfurt (19%). Interestingly, the traffic in reverse on the route prefers to use Copenhagen (26%) over Tegel (25%), with Frankfurt still in third (16%).

An O&D that is not served by a non-stop flight will typically display a low purchase rate and low traffic. In this instance Skyscanner’s Travel Insight indicates a monthly average of 5.4% for the Stockholm to Stuttgart route (see graph below). Therefore, if there was a Stockholm to Stuttgart route, and if bookings performed in line with the “Skyscanner market average” for direct services at both airports (5.9%), the airline operating this route could immediately expect an improved purchase rate of 10%, without any increased marketing spend. However, with nearly 110,000 annual searches, the potential city pair should already be very sustainable at around a five times weekly to daily frequency. 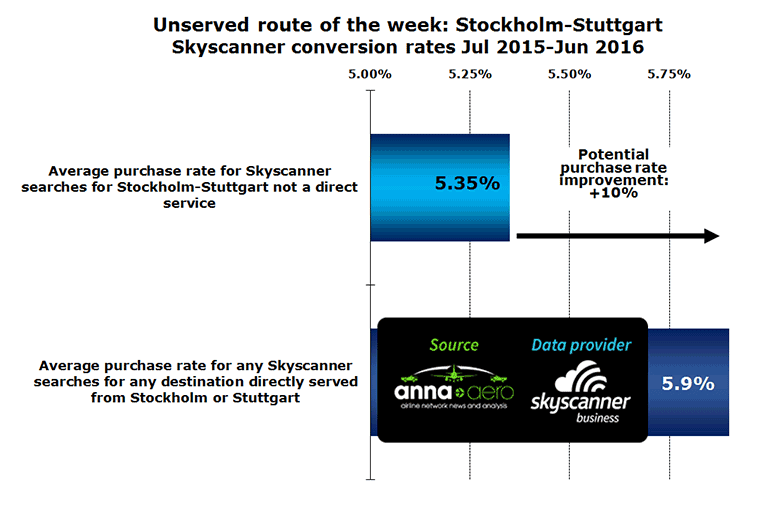