This week Turkish Airlines launched a four times weekly service to Cluj-Napoca in Romania, a service which started despite its well-publicised drastic network cuts for W16/17. Additionally, the Star Alliance carrier is planning for long-haul network growth in Latin America (Havana, Mexico City and Caracas) and Asia (Denpasar). The latter may act as a spring board for one-stop Australian services.

The route network progress of Turkish Airlines is inexorable, relentless, unyielding. It operates the world’s biggest hub when measured by number of destinations and countries served; its home base of Istanbul Atatürk, where it commands 77% of capacity, is the eighth largest in the world in terms of weekly seats and ninth largest in terms of weekly frequencies. So when the airline’s CEO Temel Kotil said in a recent interview that it wants to launch flights to Mexico City, Caracas and Havana (he also said Bogota – which the airline actually started in May!! Bad briefing by his PA on that one) in Latin America and Denpasar in Asia (perhaps to act as a springboard to one-stop services to Australia) you think (well at least we do) – this is going to happen. Our data elves have therefore taken this opportunity to look at the competitive landscape of these four potential routes, from a hub perspective.

Looking first at the prospective route to the Cuban capital, there are 13 hub airlines operating in this market, the only one missing from the top 12 in the graph below is Cubana, which operates a weekly non-stop service to Madrid. Of the three Latin American markets proposed by Kotil, this route is where Turkish Airlines will face the most intense competition in terms of the number of incumbent airlines, as well as five of the top 12 carriers (highlighted in light green) being competing hub airlines – namely Air France (Paris CDG), Air Europa (Madrid), Aeroflot (Moscow Sheremetyevo), Iberia (Madrid) and KLM (Amsterdam). This is a valid point, as Turkish Airlines will be competing with these carriers for global transfer traffic. On this basis, our data elves also cast an eye over the MEB3 airlines – Emirates, Etihad Airways and Qatar Airways – and their respective route networks to these destinations. Interestingly, none of them currently flies to Havana. 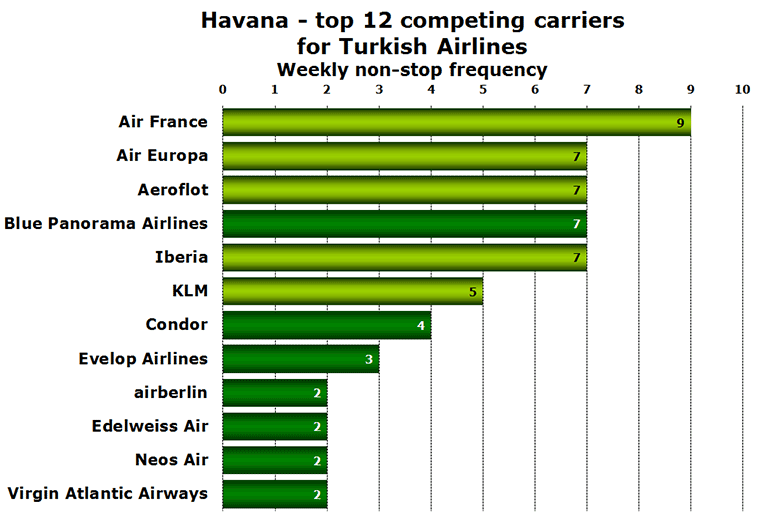 Switching our attention to the capital of Venezuela, the competitive landscape is a little less crowded than the previous market of Havana. Just five airlines are in the mix, including four European hub carriers, but the Middle Eastern trio are conspicuous by their collective absence again. If Turkish Airlines were to offer a daily service to Caracas, it would be the only European/MEB3 hub carrier to do so, giving it a significant USP over the incumbents. 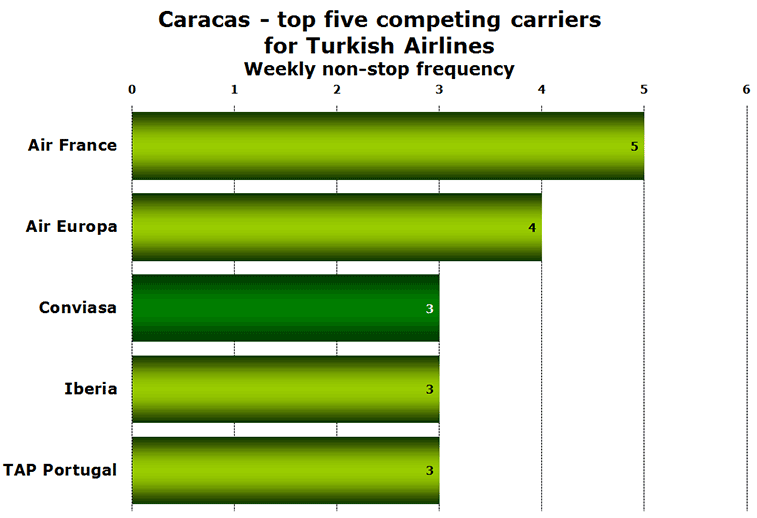 While Havana may have had more airlines vying for Cuban traffic, Mexico City has more weekly frequencies, offering 78 versus 57. Unlike Havana or Caracas, this market is not led by a European or MEB3 hub carrier, but by Mexico’s own Aeromexico. The battle for the global connecting passengers will be a lot more intense for Turkish Airlines if and when its starts flying to Mexico City, as five carriers (Iberia, Lufthansa, KLM, Air France and British Airways) are operating at least a daily service already, more than in both the Havana and Caracas markets. The MEB3 are lacking again in Mexico City market, undoubtedly a key driver for Turkish Airlines to stake its claim in this arena first. 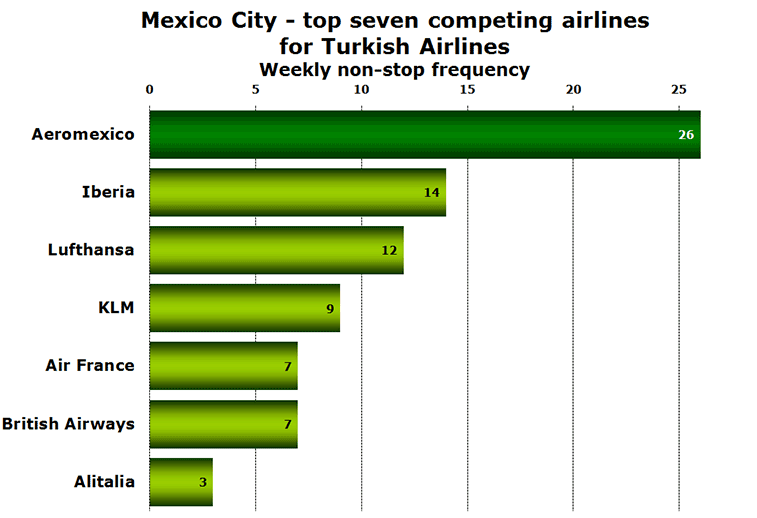 The final possible new long-haul route currently exercising the minds of Kotil’s team of network planners is the Asian offering of Denpasar (or Bali). In terms of European competition it is limited – with KLM offering a one-stop service via Singapore from Amsterdam to the Indonesian island paradise. However, this sector is more likely to be the domain of the MEB3. Indeed both Emirates (daily) and Qatar Airways (double-daily) are likely to provide Turkish Airlines’ Atatürk hub with some stiff competition from their respective Dubai and Doha operations, should the Star Alliance carrier decide to take the plunge. The benefit that Turkish Airlines has over these two carriers is the fact that its non-stop European network boasts 143 destinations, whereas Emirates and Qatar Airways offer just 37 (another 18 if you add flydubai) and 36 respectively. So lots of opportunity to suck-up plenty of Denpasar connecting traffic from its far broader network.

During the interview, Kotil suggested that Denpasar could be used as a staging post for Turkish Airlines’ long-awaited, much talked about, but still not launched Australian services, given that it doesn’t have the aircraft types to fly direct from Atatürk down under. The Kangaroo Route is a key element of all MEB3 carrier’s networks (as shown below), so they are not likely to be happy with the new insurgent muscling in on their territory. It should be noted that only one European flag carrier offers one-stop service to Australia these days, British Airways flies to Sydney via Singapore, with the likes of Air France, Lufthansa, KLM et al electing to use partner carriers to serve these markets.

Turkish Airlines capacity – not so delightful

While the long-term aspirations of Turkish Airlines will succeed unfettered by recent events, including the above new long-haul routes, the short-term is a little more troubling. If you are a network planner with significant capacity in Turkey, particularly to Istanbul, you have probably gained a few grey hairs over the past few weeks. Demand has temporarily fallen off a cliff and the seat culling has begun, especially for the upcoming W16/17 season. Leading the way and undoubtedly feeling the most pain (it recently reported H1 2016 financial results which illustrated a $647 million loss, compared to a $406 million profit for the same period last year) is of course home carrier Turkish Airlines. It has recently made the following network cuts for W16/17:

In review, over 280 weekly frequencies have been removed from 78 different routes on Turkish Airlines’ short-haul/European network, plus 53 weekly frequencies on 18 airport pairs on its intercontinental operations. To put this this into context the airline is operating over 5,000 frequencies this week from the three affected bases – Atatürk, Istanbul Sabiha Gökçen and Ankara, according to OAG schedule data for week commencing 1 September. Therefore these frequency cuts represent 5.6% of its schedule this week – not a small proportion at all.

In addition to the home carrier’s cuts, other airlines are also trimming W16/17 capacity as Turkish demand has dampened. Alitalia has reduced its Rome Fiumicino to Atatürk capacity from double-daily to daily, while KLM has culled one daily frequency of its twice-daily operation and SkyTeam partner Air France has dropped from thrice-daily to double-daily flights. However, as previously stated, the robustness of Turkish Airlines and its global hub is here to stay, despite this temporary blip. Several of anna.aero’s data elves have promised to eat their little felt hats if this prophecy is proven false. 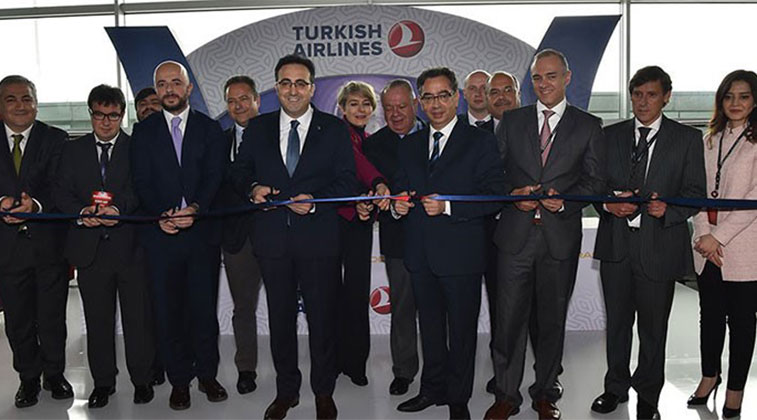 Turkish Airlines launched flights to Bogota (and onwards to Panama City) on 4 May not that the CEO Temel Kotil could remember in a recent interview. But then when you are in charge of the airline flying to the most destinations and countries in the world, you can be forgiven to know what route has launched and what hasn’t.