Milan/Bergamo is Ryanair’s biggest base in mainland Europe and third biggest overall; over 70 destinations served across 25 countries 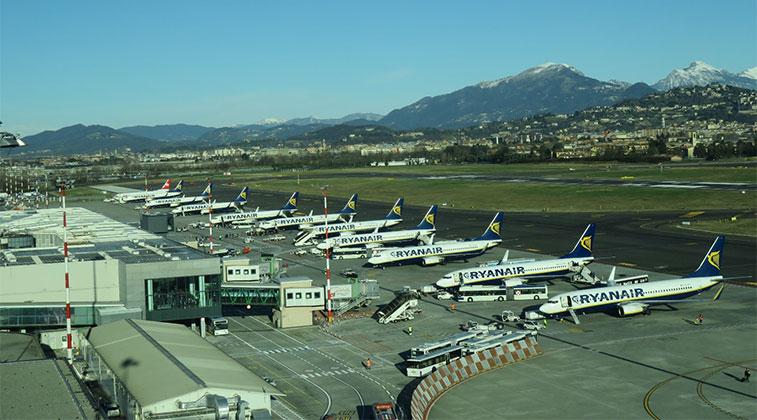 For the last two summers Ryanair has had 16 737-800s based at Milan/Bergamo. The ULCC first started serving the airport in 2002 from Frankfurt Hahn and London Stansted before making it a base in February 2003. In total almost 120 destinations have been offered at one time or another in the last 14 years. The airport is Ryanair’s biggest base in mainland Europe.

Ryanair made Milan/Bergamo a base way back in February 2003, although the Irish ULCC first began serving the northern Italian airport from Frankfurt Hahn in February 2002 and London Stansted in April 2002. The airport now ranks as the carrier’s biggest base in mainland Europe, beaten only by its home base in Dublin and its huge base at Stansted. 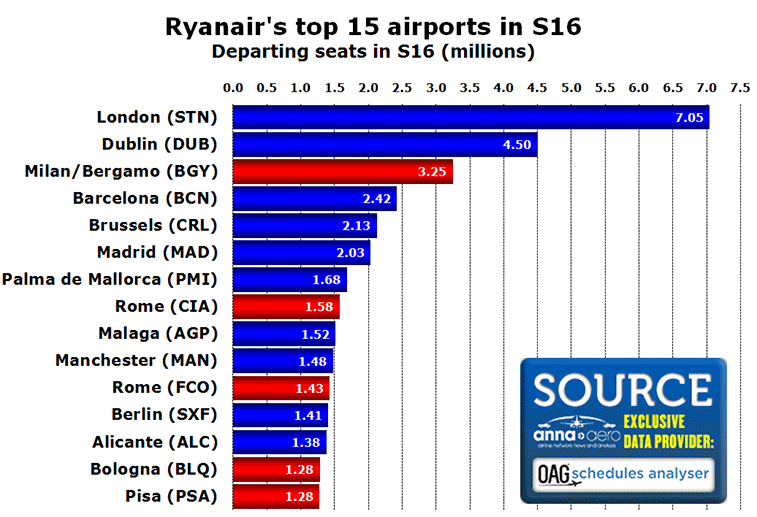 Milan/Bergamo is also twice as big as any other of Ryanair’s bases in Italy. However, the ULCC’s presence in Rome is almost as big, but split almost equally across the city’s two main airports at Fiumicino and Ciampino. According to OAG data for S16, Ryanair accounts for 81% of Milan/Bergamo’s seat capacity (and 79% of flights) with its nearest being rival Wizz Air, which has just 9% of both. No other carrier has more than 2% of seats, with Blue Panorama Airlines being the airport’s third biggest airline.

Busiest summer ever in S16

Tracking the development of Ryanair’s presence at Milan/Bergamo over the last decade reveals that the carrier has offered flights to 118 destinations since it first arrived in 2002. Of those, 67 were served this summer, while a further 10 are set to start this winter or next summer. This summer saw Ryanair offer almost 600 weekly departures from the airport, beating the previous record set in S12 of 532. However, according to OAG Schedules Analyser the most destinations served in any given season was 79, back in S13. This record may be beaten in S17. 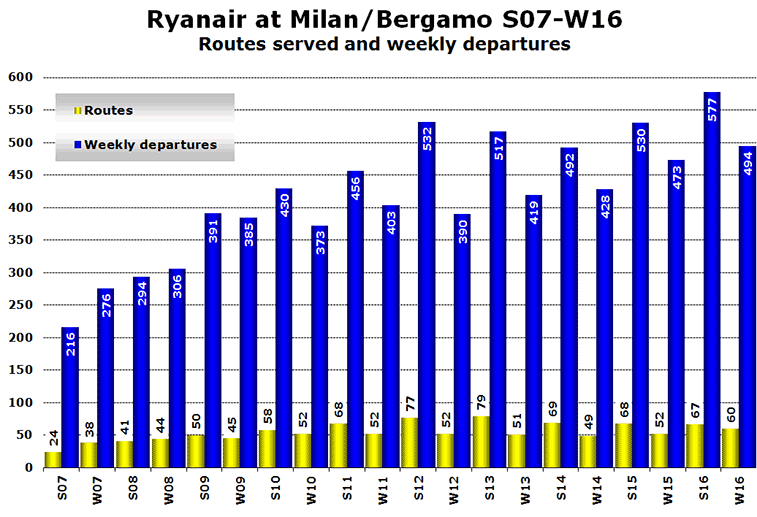 This winter will see Ryanair offer more destinations than ever before during a winter season, with 60 destinations available in February 2017. This easily beats the previous winter record of 52. Destinations served this winter that were not available in February 2016 include Belfast International, Gdansk, Hamburg, Nis, Nuremberg, Ostrava, Prague, and Timisoara. In addition a few routes have converted from summer-only services to year-round services while a couple of destinations have been dropped (Crotone and Oslo Rygge). For next summer, Ryanair will also be launching additional new routes to Edinburgh, Luxembourg and Vigo.

Analysis of Ryanair’s Milan/Bergamo network by country market reveals that its domestic routes are the largest, followed by flights to Spain and the UK. While domestic capacity was virtually unchanged, flights to Spain and the UK were both up around 10%. The fastest-growing country market was Germany with seat capacity more than doubling since last summer. This was primarily driven by the launch of twice-daily flights from Cologne Bonn (from 25 October 2015) and the Berlin Schönefeld route increasing from daily service to double-daily. In addition Ryanair also serves Bremen, Frankfurt Hahn and Weeze. 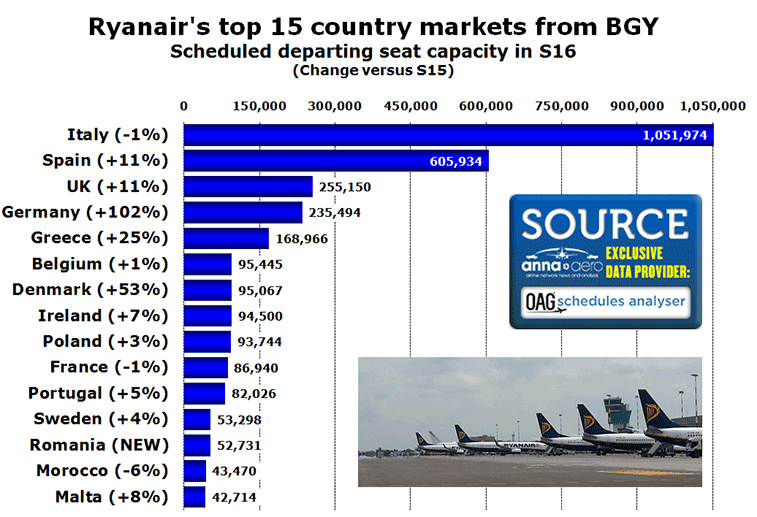 A new entry in the top 15 country markets is Romania. A daily service to Bucharest began in late October 2015 while this winter will see the launch of a second Romanian route to Timisoara. The only one of the top 15 country markets to see a significant cut in capacity this summer was Morocco, where the number of seats on offer was down 6% compared with S15. A total of 22 country markets are served this summer from Milan/Bergamo. This will increase to 25 next summer with the addition of the Czech Republic, Luxembourg and Serbia.

Last December Ryanair opened an additional base at Milan Malpensa with just four routes to Bucharest, Comiso, London Stansted and Seville. That remained unchanged this summer until Porto and Sofia flights were added earlier this month and the start of the winter season will see the launch of a further three destinations; Brussels, Catania and Gran Canaria. However, the launch of this second base in Milan appears not be having a detrimental impact on Ryanair’s network at Milan/Bergamo. 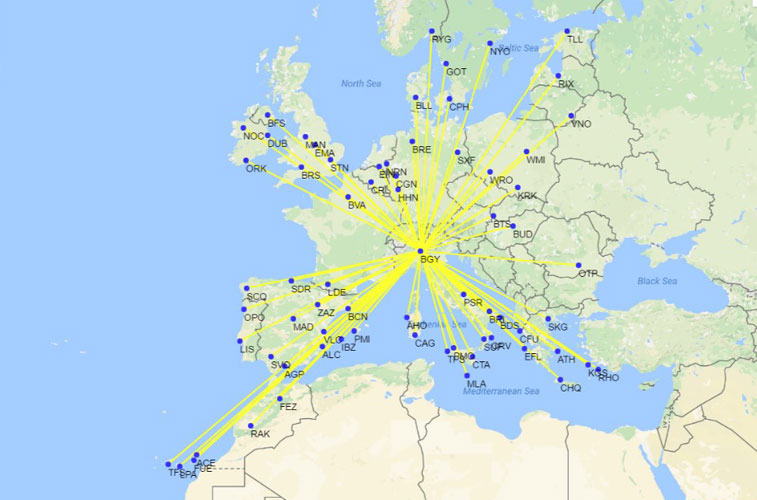 Ryanair’s third biggest base (and largest in mainland Europe) is at Milan/Bergamo. Almost 70 destinations were served non-stop this summer, with the figure likely to be closer to 80 next summer with the addition of new destinations this winter (and next summer) such as Belfast, Edinburgh, Gdansk, Hamburg, Luxembourg, Nis, Nuremberg, Ostrava, Prague, Timisoara and Vigo.