What a coincidence. On 28 June Iberia launched a new thrice-weekly long-haul service from Madrid to Shanghai Pudong. On the same day China Eastern Airlines also began operating the same airport pair, but with four weekly flights.

The airport serving Spain’s capital is the country’s busiest and also ranks sixth in Europe, handling 46.8 million passengers in 2015. It was also the fastest-growing airport among Europe’s ten busiest airports, with demand up 12% compared with 2014, beating even Istanbul Atatürk’s growth last year of 7.7%. However, traffic at Madrid Airport is still some way below the all-time high of 51.8 million achieved in 2007. In the decade before that, passenger numbers had grown an incredible 124%, equivalent to an average annual growth rate of 8.4%.

The global economic crisis of 2008 put a brake on growth. In addition, Spanair ceased operations in early 2012, while easyJet’s decision to close its base there in 2013 took further capacity out of the market. However, the last two years have seen an upturn in the airport’s fortunes thanks to Ryanair’s growth and Iberia’s expansion (especially of its low-cost subsidiary Iberia Express), as well as Norwegian’s decision to make the airport a base. 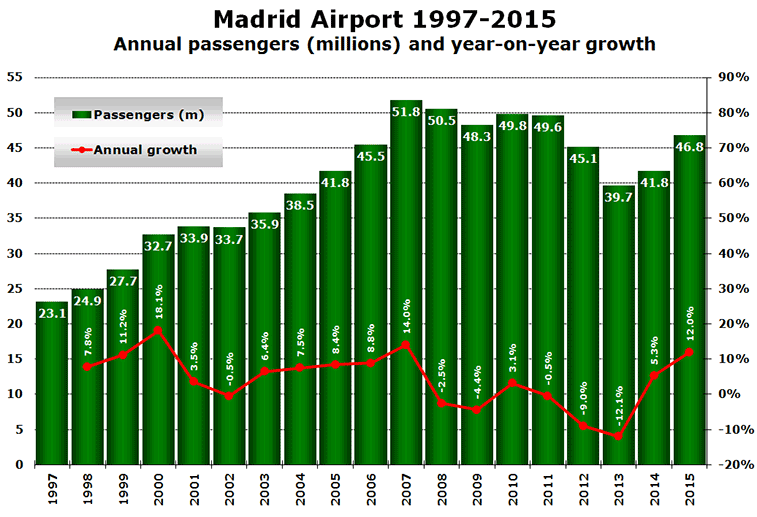 According to data from Aena, Madrid’s traffic is up almost 8% in the first eight months of this year suggesting that the airport may once again exceed 50 million annual passengers. While this growth is impressive, it is in fact the slowest growing airport among the top 10 busiest in Spain, eight of which are reporting double-digit growth so far this year. The airport’s seasonality profile for 2015 scores an “Excellent” 1.87 on anna.aero’s SVID (Seasonal Variation in Demand) calculator. However, this score has been creeping up in recent years from 1.43 in 2013 to 1.69 in 2014 and then to 1.87 last year. 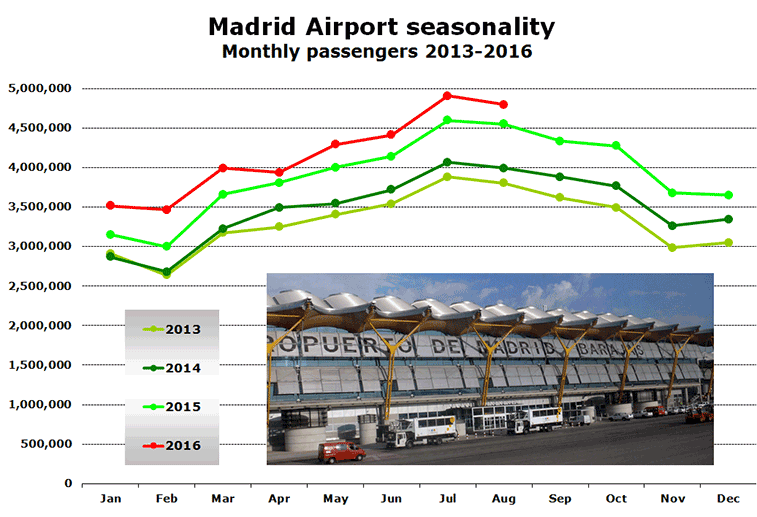 Iberia and Ryanair lead the way

Using Aena data to identify the leading airlines in Madrid reveals that Iberia still leads the way with over 12.5 million passenger in 2015. Adding in the flights of Iberia Express, Air Nostrum and Vueling takes the figure to over 20 million passengers. The two biggest airlines that are not under the influence of Iberia (or its owner IAG) are Europe’s two leading pan-European LCCs, Ryanair and easyJet. While easyJet has been serving Madrid since 1998 (when it began flights from London Luton), Ryanair only started serving the airport in late 2006 when it made the airport its 19th base. It now ranks as Ryanair’s sixth busiest base in terms of weekly seat capacity this summer. Norwegian made Madrid a base in June 2014 though it had been operating flights from Oslo to the airport since March 2006. 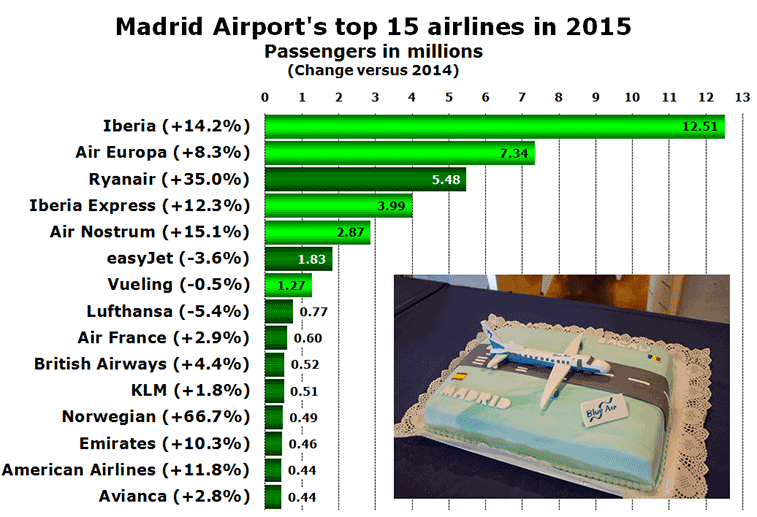 According to OAG data for September 2016 a total of 70 airlines offer scheduled services at the airport, the same number as in the same month in 2015. 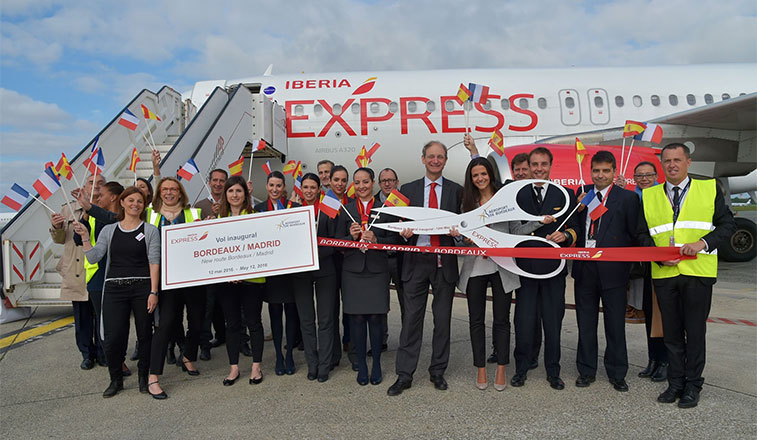 Iberia Express has been busy growing its Madrid network this summer. Bordeaux was added to its network on 12 May. Other new routes this summer for Iberia’s in-house LCC included Birmingham, Bucharest, Cork, Gothenburg, Krakow, Malta, Oslo and Reykjavik.

In 2015 nine routes witnessed over one million passengers, with Barcelona leading the way at 2.25 million. This route used to be much busier, but the development of a high-speed rail link in March 2008, cut air passenger numbers on the route by more than 50%. Back in 2007 the route was the world’s busiest with over 4.8 million annual passengers.

The airport’s top 15 routes all grew last year with seven reporting double-digit growth. However, only the London Gatwick route saw passenger growth of more than 20%. Norwegian started this route in June 2014, so 2015 was the first full year of the airline’s operation on the route, on which it competes with Air Europa, easyJet and Iberia.

Four of the top seven routes are domestic (shown in bright green). The only long-haul destination to make it into the top 15 is Buenos Aires in Argentina, which just scrapes in to 15th position. Combining the figures for Heathrow and Gatwick means that London is a slightly bigger market now than Barcelona, while the two Paris airports between them also saw more than two million passengers travelling between the two cities. 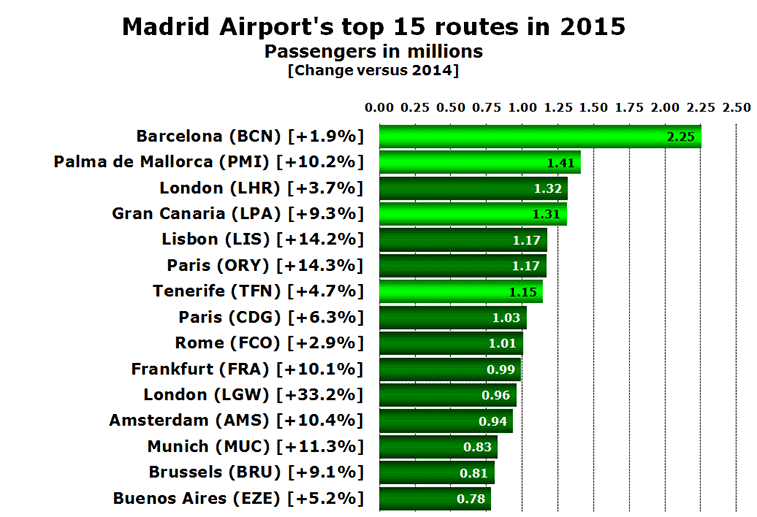 One of the more curious network developments was that in summer 2015 only one airline served Birmingham in the UK, namely Norwegian. However, this summer, not one, not two, but three other airlines also decided to connect the two airports; Iberia Express, Monarch Airlines and Ryanair. It is not yet clear whether all four carriers will be serving the market in 2017. Looking ahead to this winter, Madrid will welcome new services to Brussels (Ryanair), Cordoba (Air Europa), Guayaquil (Air Europa), Reykjavik/Keflavik (Norwegian), Tokyo Narita (Iberia), Toulouse (Ryanair) and Wroclaw (Ryanair).

However, analysis of OAG schedule data reveals that there have also been some significant route droppings in the last 12 months. These include: airberlin to Düsseldorf; Air Europe to Ouarzazate; easyJet to Berlin Schönefeld; germanwings to Düsseldorf and Hamburg; Iberia to Hannover, Istanbul Atatürk and Verona; Norwegian to Hamburg; Ryanair to Alghero, Bremen, Cagliari and Oslo Rygge; Thai Airways to Bangkok; and Vueling to Bucharest and Malta.

Not much separates the top four international country markets

There were almost 13 million passenger last year in Madrid travelling on domestic routes, an increase of almost 7% over 2014. However, since this growth was below that for the airport as a whole it meant that routes to other destinations in Spain represented just under 28% of the total, down from just over 29% in 2014.

Looking at international markets shows that levels of demand to/from Italy, the UK, France and Germany are all surprisingly similar. All four markets increased by at least 12% last year, with the German market showing growth of twice that at 24%. Given all the route droppings to German destinations it’s not surprising that in the first eight months of 2016 passenger numbers to Germany are down 0.6%, while the other leading country markets are all still growing; Italy, Portugal and the UK by 10%, the US by 6% and France by 5%.

Eight of the top 10 international markets are in Europe. Country markets in the Americas are shown in bright green with the US leading the way ahead of Brazil, Mexico and Argentina. Just outside the top 15 markets are the UAE (17th), Cuba (21st), Qatar (24th) and Russia (25th). China, currently just 46th is likely to be considerably higher up the rankings in 2016. 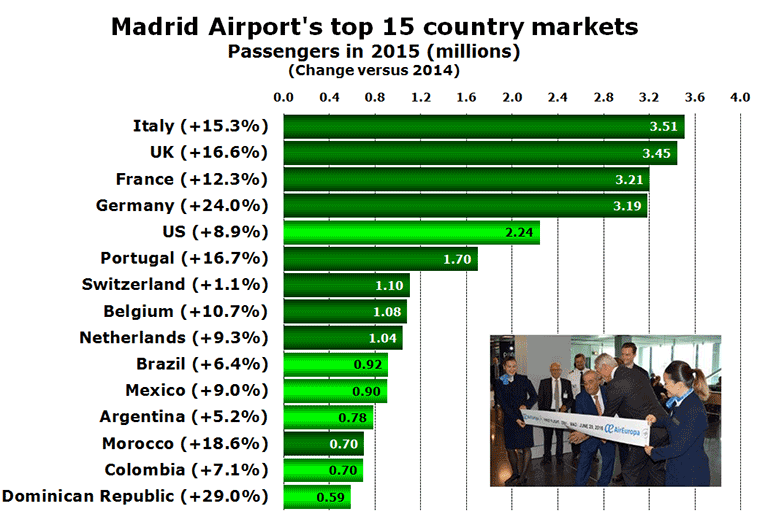 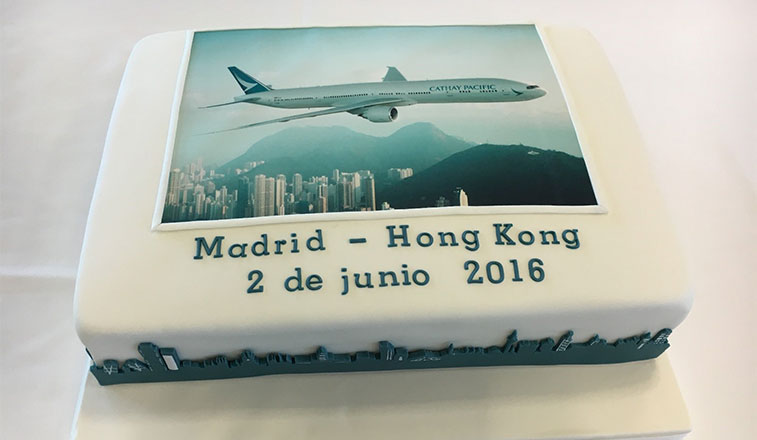 Cathay Pacific launched a new service to Madrid from Hong Kong on 2 June. It became the oneworld carrier’s first route to Spain. Madrid’s biggest airline, Iberia, is also a member of the oneworld alliance.