Eric Schulz, Rolls-Royce President – Civil Aerospace; Fabrice Brégier, Airbus President and CEO; Charamporn Jotikasthira, President, Thai Airways; and Jeff Knittel, President, CIT Transportation & International Finance, were on hand in Toulouse on 30 August to welcome the first A350 into the fleet of Thailand’s flag carrier. Thai Airways becomes the eighth operator of the A350.

Deliveries in August for Airbus and Boeing totalled 120 units, 22 more than the collective figure for both companies in July, and 12 more than the same month of 2015. August was also the first month this year when Airbus distributed more aircraft than Boeing, with the European manufacturer delivering 61 units, while its North American counterpart handed over 59. The result means that Airbus has closed its gap on Boeing, in regards to deliveries for 2016 so far, to 91 units. At this point last year, the delivery void between the two was 102 units, with Boeing once again having the lead. During August, Airbus delivered 17 more units this year when compared to the same month last year, while Boeing distributed five less units than the same 31 days of 2015. In relation to the distribution of narrow-body and wide-body aircraft, 71% of deliveries in August were narrow-body, while 29% were wide-body. 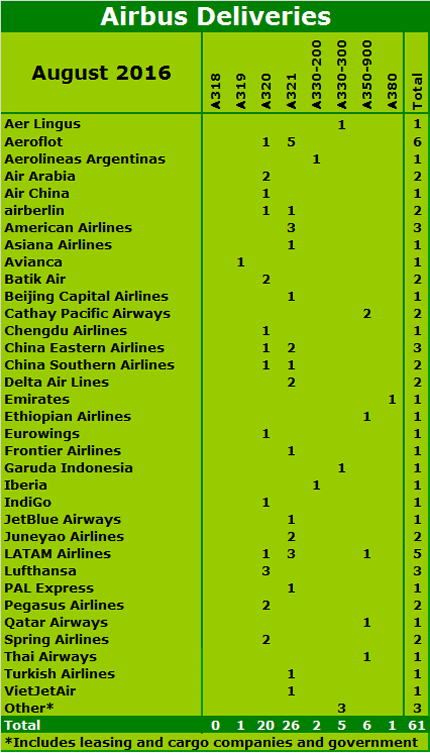 Airbus ended August with a total of 61 unit deliveries, 20 more than it delivered in July, and 17 more than it distributed during the corresponding month of last year.

In July, single-aisle deliveries were led by the A321 (26 units – up seven from July), while the A320, which is usually the stronger performing of the two types when it comes to deliveries, was the second most popular type (20 units – three more than in June). One A319 was also delivered last month. This means that a total of 37 single-aisle units were distributed to clients around the world in August, resulting in Airbus, for a second month in a row, delivering more single-aisle units than Boeing. The North American manufacturer distributed nine less aircraft than Airbus in July. A total of 15 airlines received the A321 in August, the same amount as the month before. Aeroflot was the largest recipient of the type, picking up five. American Airlines and LATAM Airlines both welcomed three A321s each into their retrospective fleets. In relation to A320 deliveries, 14 airlines received the type (one less than July), with Lufthansa being the largest recipient in welcoming three. Air Arabia, Batik Air, Pegasus Airlines and Spring Airlines each collected two. Aeroflot, airberlin, China Eastern Airlines, China Southern Airlines and LATAM Airlines accepted at least one A320 and A321 into their fleets in August.

In relation to the wide-body market, Airbus handed over 14 units in August, nine more than July. After having delivered no A380s in July, the European aircraft maker handed over one last month to Emirates, the world’s largest A380 operator. August was only the second month this year when Airbus has delivered at least one unit of each of its long-haul aircraft, with the other month being June. August was a record-breaking month for the company in regards to A350 deliveries, with it distributing six last month. Cathay Pacific Airways was the largest recipient, with it collecting two. Thai Airways also welcomed its first A350 in August. It now means that eight carriers now operate the A350. 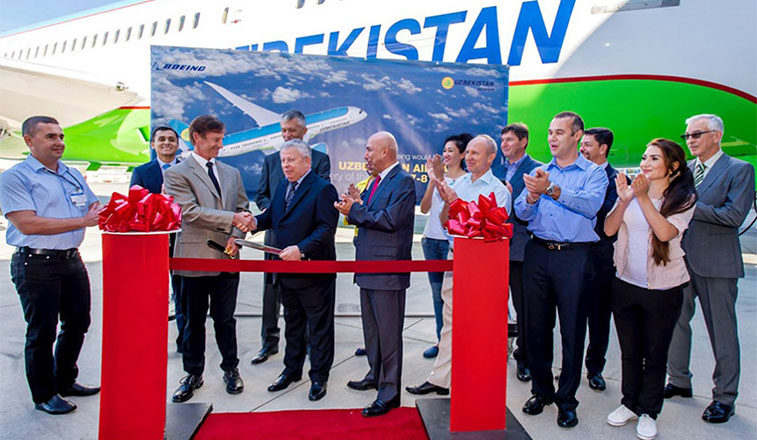 Uzbekistan Airways welcomed its first 787-8 in August with a handover ceremony in Seattle. The carrier, which has an order for two of the type, will initially use the aircraft on its domestic routes when referring to OAG, while Dubai will be the only international destination for Uzbekistan Airways’ latest aircraft. The carrier also operates the 757-200 and 767-300 made by the US manufacturer. 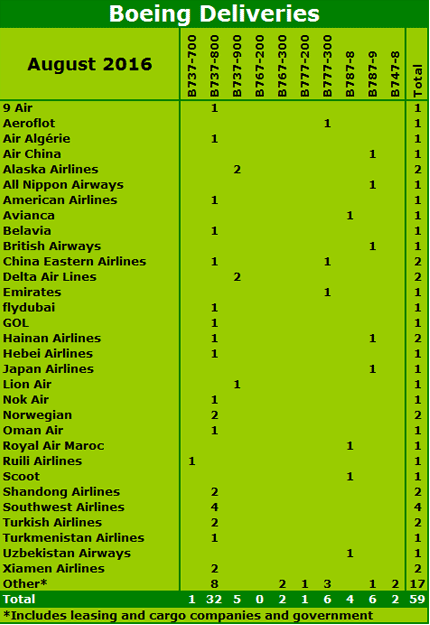 Boeing closed August with a total of 59 unit deliveries, two more than July but five less than the same month of last year. A total of 38 single-aisle units were delivered to airlines in August, two more than the month before. A total of 32 737-800s (one more than July) were delivered, while five 737-900s (one more) were accepted by airlines. One 737-700 was also distributed in August, the same as July. Southwest Airlines was the largest recipient of the -800 variant in August, with the world’s’ largest LCC collecting four. The month before, Southwest collected three -800s. Norwegian, Shandong Airlines and Turkish Airlines each collected two of the type. In relation to the five 737-900 unit deliveries, Alaska Airlines and Delta Air Lines each collected two, while one went to Lion Air.

An analysis of wide-body deliveries reveals that Boeing handed over a total of 21 units, the same amount it delivered in July. Although Airbus delivered more single-aisle units in August, Boeing handed over seven more wide-body aircraft than its European rival. In August Boeing handed over 10 787s, four less than July. Unlike most months, each 787 was distributed to an individual airline, meaning there is no outright leader in regards to unit collection of the type for August. The same also goes for the 777-300 and -200 variants, while the two 747-8s that were delivered in August went to leasing companies. 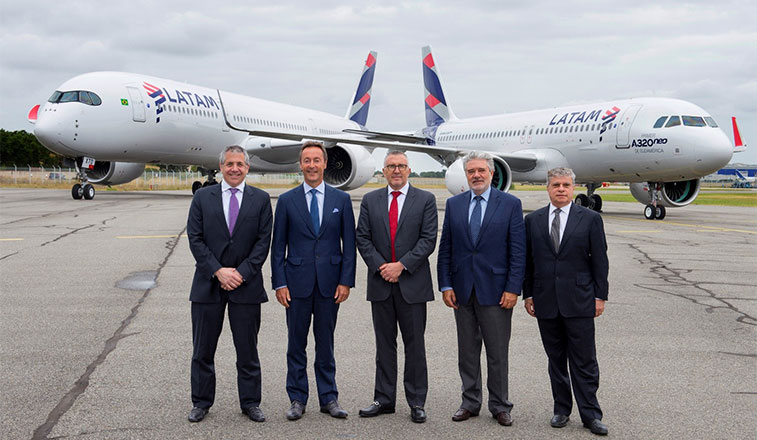