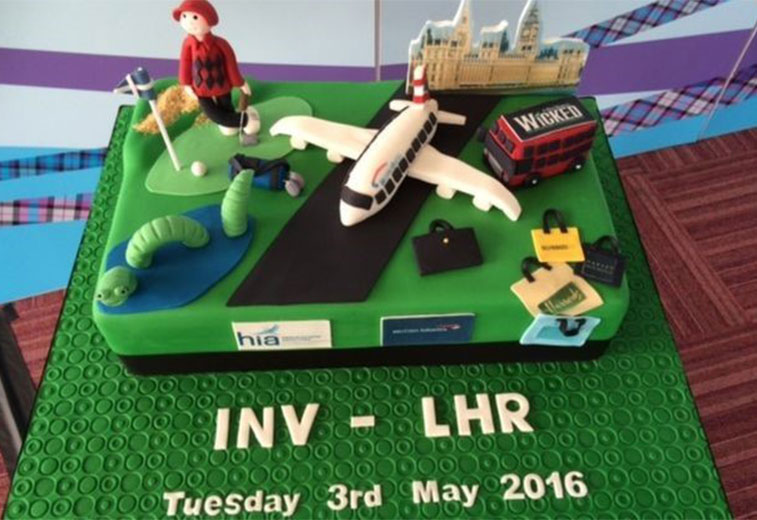 UK domestic air travel grew by 4.6% in 2015 the highest rate of growth for more than a decade. It marked the third year in a row that demand for scheduled air services within the UK had grown after a run of seven straight years of decline from 2005 to 2012. A number of factors have contributed to the decline in domestic air travel during that period including the global recession, a doubling of the UK Air Passenger Duty (APD) in February 2007 (which has to be paid on both legs of a domestic journey) and an improvement in rail services. Despite the recent improvements, total domestic traffic in 2015 was still 16% below the peak achieved a decade earlier in 2005. 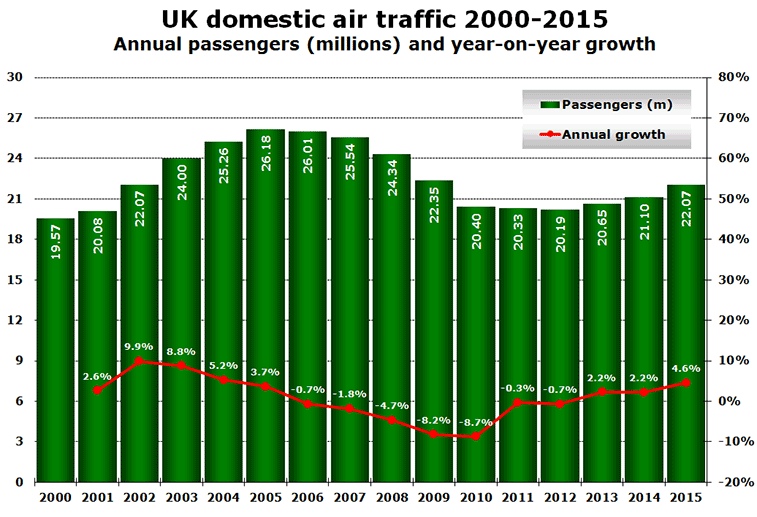 In 2015 there were 62 domestic routes in the UK which generated more than 100,000 passengers, up from 60 in 2014. By far the busiest route was between London Heathrow and Edinburgh which saw almost 1.4 million passengers use the service offered by British Airways and, for some of the year, Virgin Atlantic Airways’ Little Red operation. The top 13 routes all involved a London airport; Heathrow six times, London Gatwick four times, London Stansted twice and London City once. The top-ranked domestic route from London Luton (to Belfast International) ranked 18th. The busiest route not to include a London airport was between Liverpool and Belfast International, a short sector of 260 kilometres, but most of it is over water. Of the top 11 routes eight were between a London airport and a Scottish airport, the exceptions being Heathrow to Manchester, Gatwick to Jersey, and Heathrow to Newcastle. 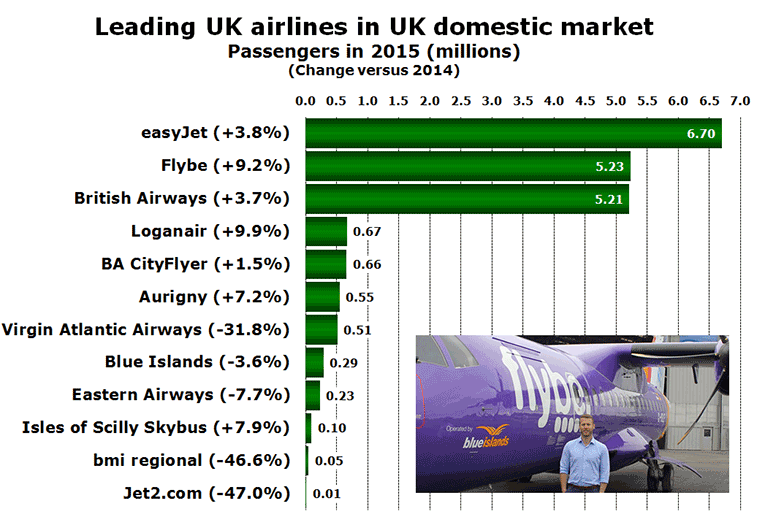 The two routes from London Stansted to Edinburgh and Glasgow showed the biggest gains in passenger numbers in 2015 thanks to Ryanair entering both markets in October 2014 to take on easyJet, which has been operating the routes for many years. The 50% increase on the London City to Edinburgh route is explained by Flybe launching multiple daily flights in October 2014, challenging British Airways’ CityFlyer services which also operates several times per day.

British Airways, easyJet and Flybe all have major presence in UK domestic market

In pure passenger numbers, easyJet was the leading UK domestic carrier in 2015 beating British Airways and Flybe. However, given that most of Loganair’s flights are operated on behalf of Flybe, and that BA CityFlyer is clearly a part of British Airways, the difference between the top three carriers narrows considerably. All of Virgin Atlantic Airways’ Little Red services ended in 2015 and Blue Islands became a Flybe franchise partner earlier this summer. 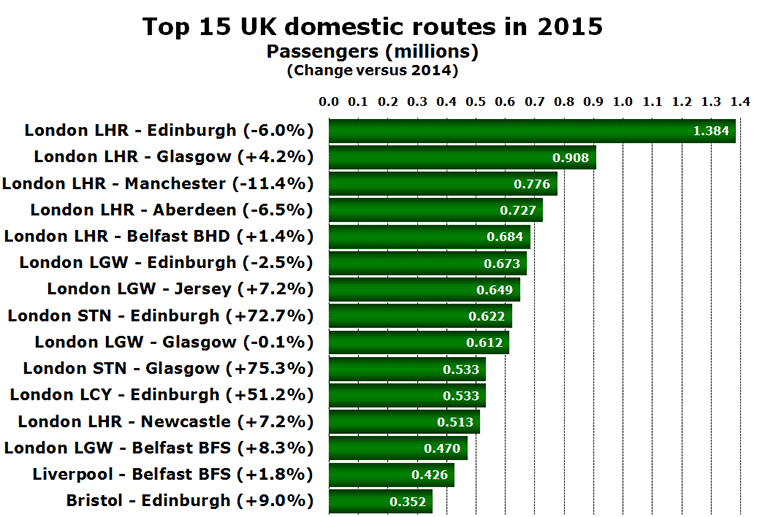 This data only shows UK-registered airlines and so does not include Irish-based carriers Aer Lingus or Ryanair who, according to OAG Schedules Analyser, contributed almost two million seats into the UK domestic market in 2015. anna.aero estimates that Ryanair carried just over one million passengers on UK domestic routes last year, making it the fourth biggest carrier. Aer Lingus operated multiple daily flights from Belfast International to both Heathrow and Gatwick in 2015, though the Gatwick service ended at the start of the S16 season as the airline was forced to give up some Gatwick slots in return for being allowed to be taken over by British Airways’ parent company IAG. 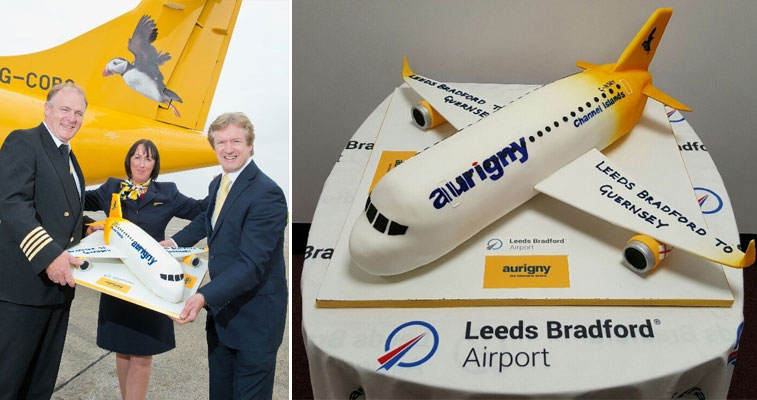 On 27 May, Aurigny began a four times weekly service between Guernsey and Leeds Bradford. The splendid cake suggests the route will be flown by a jet aircraft (Aurigny does operate a single E190) but in fact the service is being operated by one of the airline’s ATR 42s.

During the last 12 months a number of new domestic services have been launched while some have been resumed after a period of suspension. Of the 10 new services listed in the following table Flybe has started five, Aurigny two and British Airways, easyJet and Ryanair one each. Four of the ten routes were previously flown by the same airline.

However, there have also been a number of route droppings during the same period. Apart from the ending of Little Red’s Heathrow to Aberdeen and Manchester services and Aer Lingus being forced to drop London Gatwick to Belfast International, time has also been called on Eastern Airways’ Birmingham to Newcastle service and easyJet’s Liverpool to Newquay service.

Flybe has dropped several domestic routes including three from its closed Bournemouth base (to Glasgow, Jersey and Manchester), two from Newcastle (London Stansted and Belfast City), as well as Southampton to Leeds Bradford and London Stansted to the Isle Of Man. 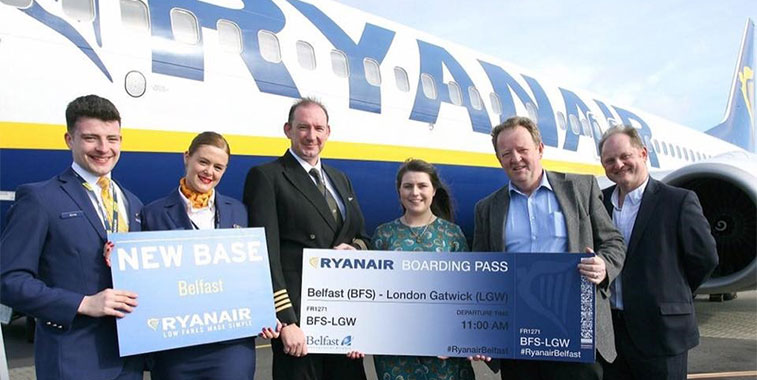 Ryanair is the fourth biggest carrier in the UK domestic market carrying over one million passengers in 2015. Earlier this year it began four times daily flights between London Gatwick and Belfast International having been given the London airport slots by Aer Lingus as part of the deal to allow Aer Lingus to be taken over by British Airways’ parent company IAG. Ryanair now operates six domestic routes in the UK spread across seven airports.