Vienna-SFO is “Skyscanner Unserved Route of the Week” with 120,000 annual searches; Austrian Airlines and United should operate in alliance 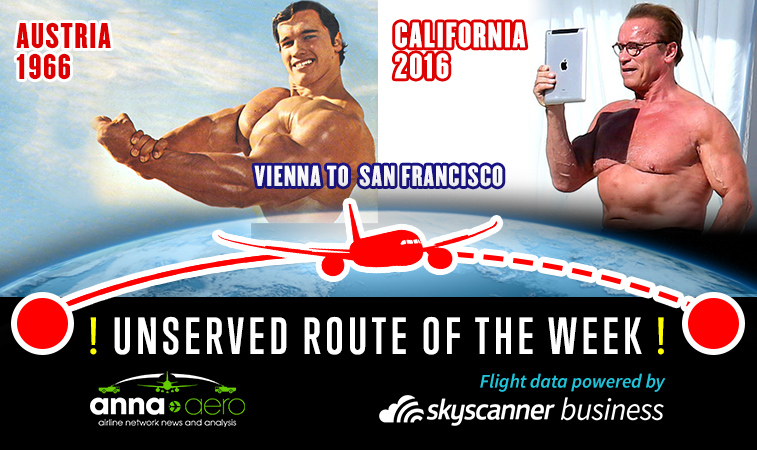 Hasta la vista baby! As we all know Austrians can make it big California. Indeed most of the demand from the 120,000 who searched Skyscanner for a Vienna-San Francisco direct route in the last year came from the Austrian end of the route where there are powerful strategic reasons for a cooperation between Austrian Airlines and United Airlines. Both Star Alliance airlines could build this 120,000 aspirational market into so much more!

With over 120,000 searches in the last 12 months, a potential new route from Vienna to San Francisco (SFO) has been selected as the “Skyscanner for Business-anna.aero “Unserved Route of Week” – a powerful new kind of analysis based on aspirational data captured from the Skyscanner.net flight comparison site used by +50 million unique visitors per month. 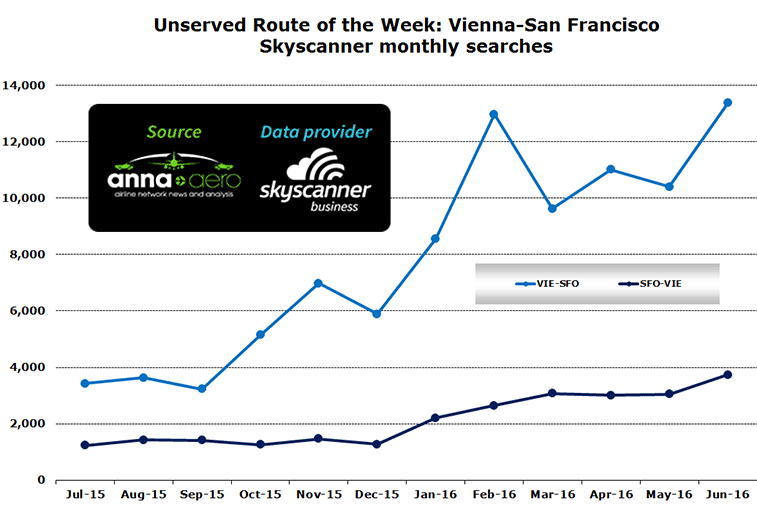 anna.aero says Austrian or United should (co)operate this route!

With the traffic on this route indicating a 79/21 split in favour of the Austrian end, the potential carriers at Vienna were therefore contemplated first. Unsurprisingly, the flag carrier, Austrian Airlines, is currently the largest carrier (46% share) at the Austrian airport in terms of weekly seat capacity, according to OAG schedules data for the week commencing 12 September. While the country’s largest carrier (in terms of weekly seats) does fly five US points from its biggest hub (Chicago O’Hare, New York JFK and Newark, Washington Dulles all daily, and Miami five times weekly) – it does not currently operate to any city further west than Chicago or to any west coast US destinations whatsoever.

But as it was less than 12 months ago (16 October 2015) that the Star Alliance carrier began its Miami operations, clearly expansion into the US is something high on its route development agenda, so perhaps a further push west might be its next option? Demand for travel to San Francisco is clearly booming, with SFO announcing a $5.7bn expansion plan just this week to deal with traffic that has nearly doubled in nine years.

We then took a look at NIKI, Vienna’s second largest carrier based on weekly seats (with a 11% share). NIKI does not operate any US routes – and there is good reason for this – its fleet comprises only Airbus narrow body equipment (five A319s, 13 A320s and two A321s according to fleet information from ch-aviation) so it is very unlikely that it will be starting flights to San Francisco any time soon. The #3 airline at Vienna (5% seat share) is airberlin and it does indeed have transatlantic-capable equipment (14 A330-200s). But there are none based at Vienna at this time, with all of its existing Vienna services being flown on its A319s, A320s, A321s, ATR 72s and Q400s into five points into Germany.

Contemplating the SFO end of the route, United Airlines (43% seat share) is presently the leading player at the airport, making it the Star Alliance carrier’s fifth biggest hub after Chicago O’Hare, Houston Intercontinental, New York Newark and Denver. The airline also has existing European services from SFO – double-daily flights to Frankfurt and London Heathrow, and daily to Paris CDG. So serving Vienna from SFO would give United a golden opportunity to feed into another Star Alliance base in Europe (especially to Austrian Airlines’ specialist Russian and former Soviet markets) from a new untapped market. What other strategic reasons do two Star Alliance carriers need to start this new route?

When looking at the previous year of search data, the busiest month for potential traffic flows (for both directions on the route combined) is June 2016, with over 17,000, nearly 11,000 higher than the lowest monthly figure, which was recorded in September 2015 (4,600). The seasonality profile of this search data is significantly more extreme than last week’s Unserved Route of the Week (Stockholm to Stuttgart), with the low-month traffic representing 30% of the highest month. According to OAG Traffic Analyser, because there is no direct service, the top three connecting options chosen by those passengers who did book travel between Vienna and San Francisco in the past year indicates that the majority of connecting passengers use Frankfurt (21%) London Heathrow (16%) and Washington Dulles (11%). Interestingly, there were 35 different hub airports used by passengers looking to get indirect flights between the two cities over the past 12 months.

An O&D that is not served by a non-stop flight will typically display a low purchase rate and low traffic. In this instance Skyscanner’s Travel Insight indicates a monthly average of 4.7% for the Vienna and San Francisco route (see graph below). Therefore, if there was a Vienna and San Francisco route, and if bookings performed in line with the “Skyscanner market average” for direct services at both airports (5.4%), the airline operating this route could immediately expect an improved purchase rate of 14%, without any increased marketing spend. However, with nearly 120,000 annual searches, the potential city pair should already be very sustainable at around a five times weekly to daily frequency. 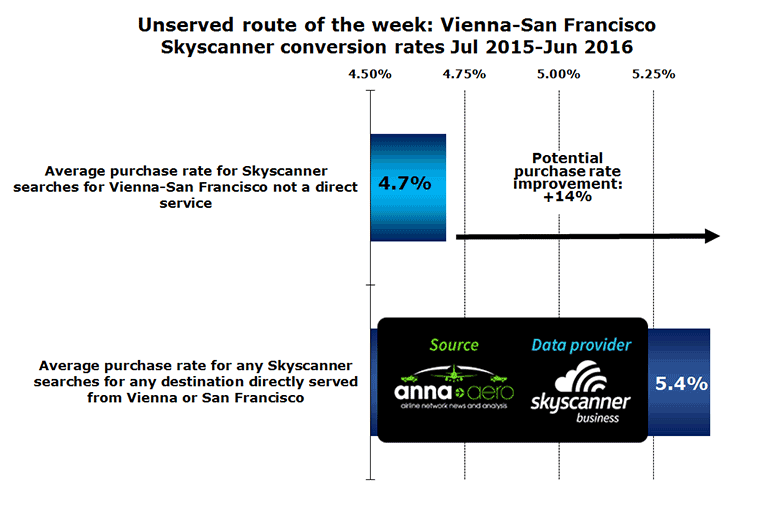