Lufthansa’s Munich hub serves over 140 destinations this year; German routes have most seats, Italy very popular, US routes #1 for ASKs 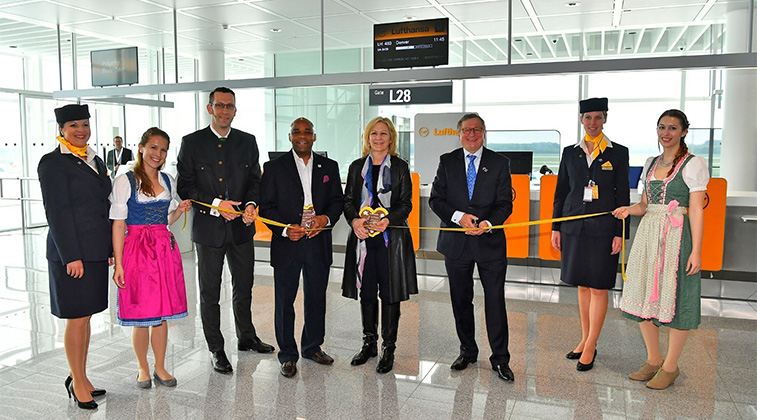 On 11 May 2016 Lufthansa resumed service to Denver in Colorado, a route it had previously served between March 2007 and October 2008. It became the Star Alliance carrier’s ninth US route from the Bavarian airport. Cutting the ribbon to mark the first flight were: Stefan Landes, Director Commercial Management, Lufthansa; Michael Hancock, Mayor of the City of Denver; Kim Day, CEO, Denver International Airport; and Dr Michael Kerkloh, CEO, Munich Airport.

Lufthansa has been operating a dual-hub strategy for many years with its biggest base of operations at Frankfurt in central Germany and a second hub in southern Germany at Munich. While its Frankfurt hub offers over half a million weekly departing seats in summer, the figure for Munich is just under 300,000. The airline’s next biggest airports are Hamburg and Berlin Tegel with fewer than 30,000 weekly departing seats. This is only Lufthansa’s own-branded operations as its Eurowings/germanwings flights operate under different codes (EW/4U). In our analysis of Lufthansa’s Munich hub, we are including flights operated by Air Dolomiti (“Partner of Lufthansa”) which connects seven destinations in Italy to Munich using its own code (EN), as well as operating other Italian routes on behalf of Lufthansa. 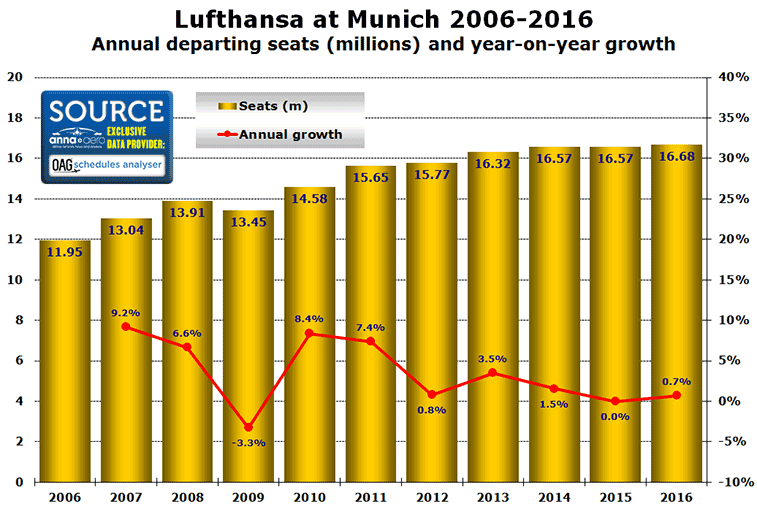 Based on schedule data for the first week in August, Lufthansa accounts for around 56% of flights at the airport and 54% of seat capacity. Its closest rivals are airberlin with 7% of flights and 8% of seats, and Transavia with between 2% and 3% of both flights and seats. Over 70 airlines offer scheduled services in Munich.

Domestic routes dominate for seats, US #1 for ASKs

A closer look at Lufthansa’s capacity for all of 2016 at Munich reveals the dominance of domestic routes, with the carrier offering almost five million departing seats to other destinations in Germany. A total of 15 domestic routes have operated in 2016, with the busiest being to Frankfurt, Berlin Tegel, Hamburg and Düsseldorf.

Italy, thanks to Air Dolomiti, ranks a clear second for seat capacity, twice as big as the third country market, France. Some 20 destinations in Italy are served during the course of the year, though several are only connected during the summer season. However, in terms of ASKs (Available Seat Kilometres) which takes into account sector length, the US is the leading country market, followed by Germany, China, Canada, Spain, Italy, India and Japan. 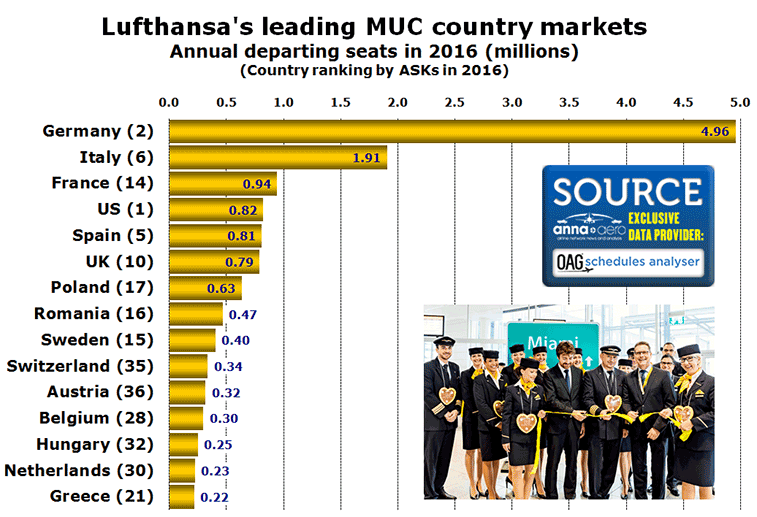 Seven US routes in top 15 by ASK

Using OAG data to analyse the airline’s biggest routes by ASKs (which is a better indicator for which routes generate the most revenue) reveals that the two Californian destinations of Los Angeles and San Francisco come top. They are joined in the top 15 by five other US destinations. All of the top 15 destinations are long-haul and none are served on average more than daily during the course of a year. 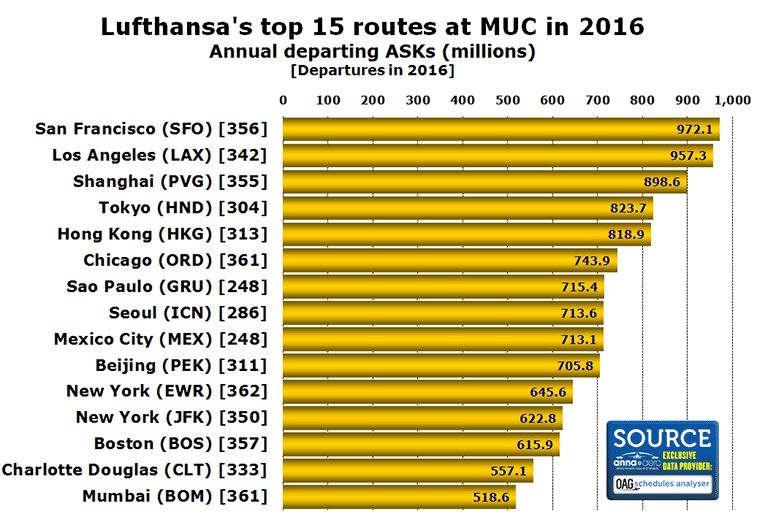 The leading short-haul destinations by ASKs are Hamburg (18th), London Heathrow (19th), Berlin Tegel (23rd), Stockholm Arlanda (24th) and Barcelona (26th). In total, across all of 2016, Lufthansa serves over 140 destinations from its Munich hub.

New routes launched this summer include Corfu, Debrecen, Denver, Porto, Rzeszow and Tehran. Denver was previously operated between March 2007 and October 2008. The launch of flights to Porto appears to be a direct response to Transavia launching that route when it opened its base in Munich earlier in the year. For this winter Lufthansa’s only new route appears to be a twice-weekly service to Marrakech in Morocco.

A look at the airline’s schedule for Monday 1 August reveals that the Star Alliance carrier operates five distinct waves of flights at the airport, to allow for connections. The airline’s busiest hour for movements is between 14:00 and 14:59 when there are 45 arrivals and 17 departures, making a total of 62 flights. The early arrivals before 06:00 are all long-haul flights from Delhi, Hong Kong, Mexico City, Mumbai, Riyadh and Shanghai, while the sole arrival after 23:00 is from London Heathrow. Between 07:00 and 22:00 there are always at least 20 movements per hour, except for between 12:00 and 12:59 when there are just 16. In total Lufthansa operates around 300 arrivals and departures on weekdays. 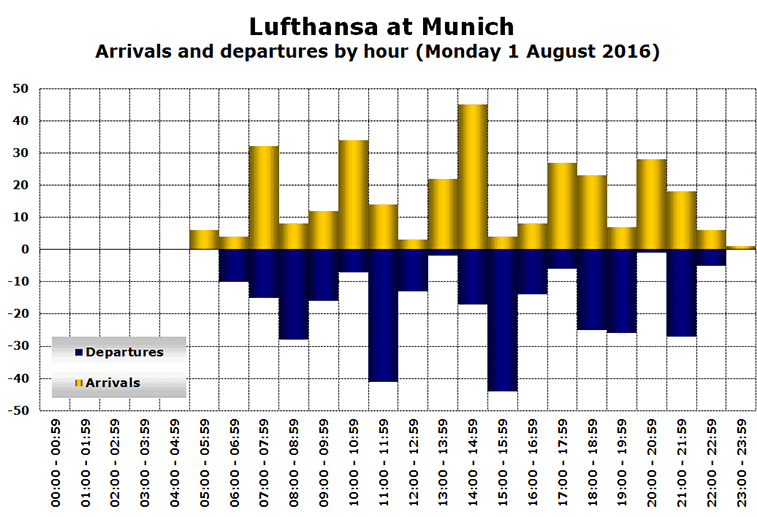 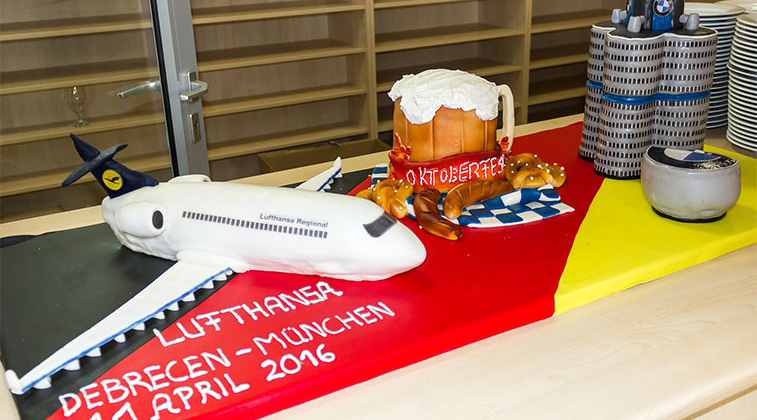 What says Munich/Bavaria better than beer and BMW (which stands for Bayerische Motoren Werke)? Proving that Lufthansa’s Munich hub isn’t all about glamorous long-haul routes, a link to Debrecen in Hungary was launched back in April using the airline’s CRJ 900s.