Canada calling. The last 12 months has seen Beijing being linked non-stop to two additional destinations in Canada. On 29 September 2015 Air China began direct flights to Montreal, while on 30 June this year Hainan Airlines started a non-stop service to Calgary. This doubled the number of Canadian destinations served non-stop from the Chinese capital as Toronto Pearson and Vancouver were already served.

Beijing Capital International Airport is the world’s second busiest after Hartsfield-Jackson Atlanta International Airport. The Chinese facility handled almost 90 million passengers in 2015 which represented growth of 4.4% compared with the previous year. Having seen passenger numbers more than double in just six years between 2004 and 2010 (when double-digit growth was achieved in five of the six years), the airport’s growth has slowed in recent years because of capacity constraints. This has led to the planning of a second major airport for the Chinese capital which is due to open in the first quarter of 2019. As a result the airport may struggle to reach the 100 million passenger milestone. Indications are that Air China (a Star Alliance member) will stay at the current airport while China Eastern Airlines and China Southern Airlines (both members of SkyTeam) will move to the new airport, which will be capable of handling 45 million passengers by 2020. 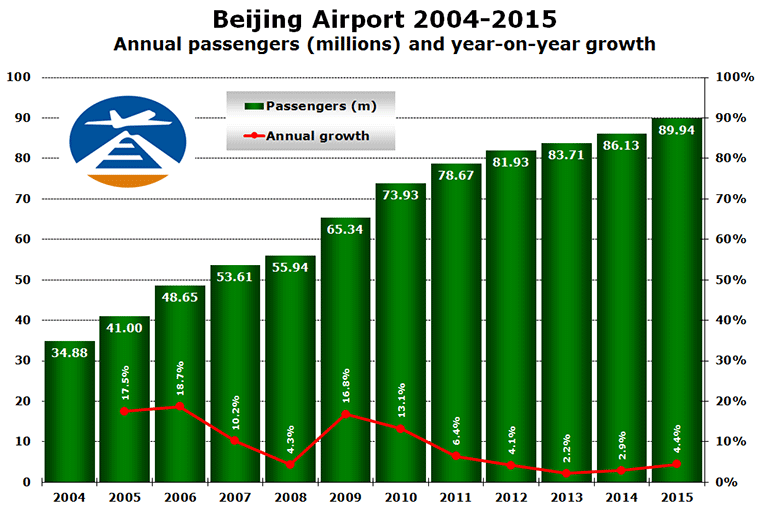 According to the airport’s press release, passenger numbers at the airport in the first half of 2016 are up 3.5% to 45.6 million. According to OAG schedule data, domestic routes have consistently accounted for between 75% and 80% of annual seat capacity at the airport, although this has fallen slightly to an estimated 73% in 2016.

Air China has almost 40% of capacity at Beijing

Analysis of OAG schedule data for Beijing indicates that Air China is the dominant carrier at the airport with around 38% of seat capacity during the current summer season. This is well ahead of China Southern Airlines (14%) and China Eastern Airlines (12%). The only other carrier with more than 3% of the market is Hainan Airlines with almost 10%. The leading foreign carriers (shown in bright green) are Dragonair, Korean Air and United Airlines. Over 80 airlines have operated scheduled services at the airport this summer. 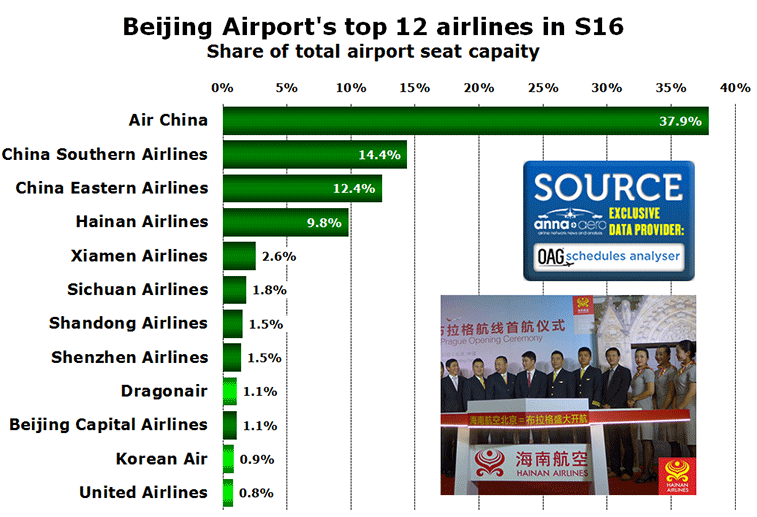 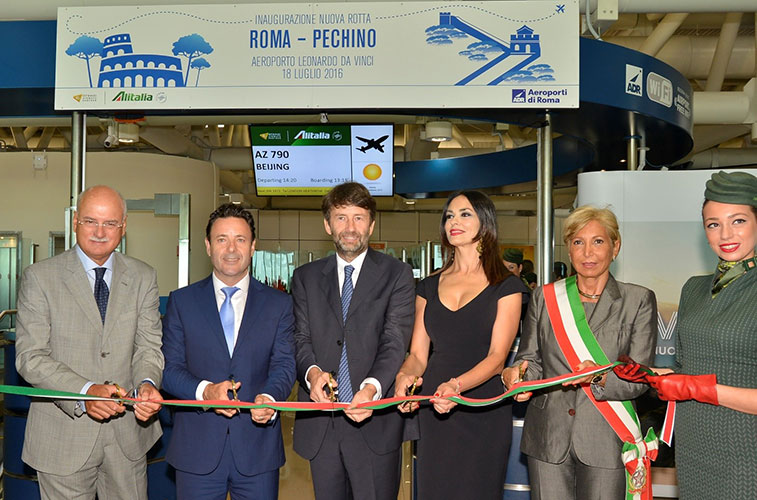 In July Alitalia resumed service between Rome and Beijing after a three year hiatus. The four times weekly flight is being flown by the airline’s A330-200s.

Analysis of the airport’s route network by country reveals that the US remains Beijing’s biggest international country market with over 1.2 million departing seats during the current summer season. Hong Kong and South Korea are also both served by over one million seats this summer. Among the top 12 international country markets, the fastest-growing this summer have been Malaysia (+46%), Canada (+32%), Thailand (+22%) and the UK (+20%). Malaysia’s growth is down to Air China starting a four times weekly A330 service to Kuala Lumpur last October, as well as AirAsia X increasing frequency on the route, which is also served by Malaysia Airlines.

Canada’s growth is thanks to new services to Calgary (by Hainan Airlines) and Montreal (by Air China). Thailand’s growth has been generated by increased capacity on existing routes to Bangkok and Phuket, while UK growth was driven by Hainan Airlines’ new non-stop service to Manchester which launched in early June. 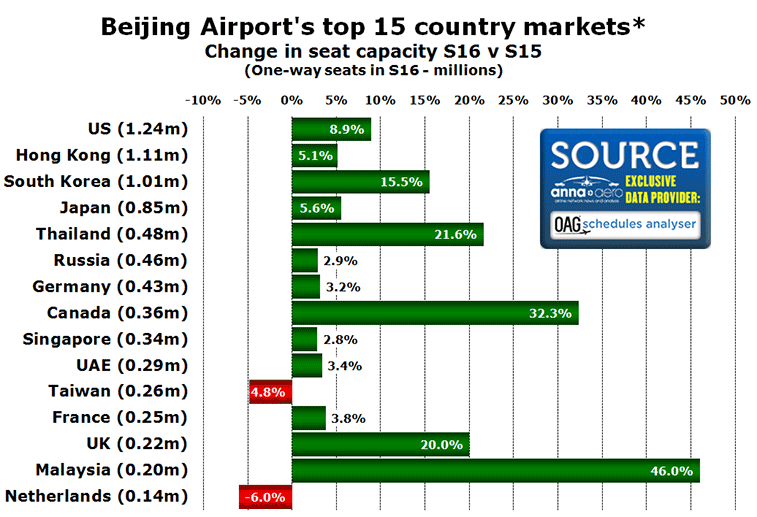 Source: OAG Schedules Analyser for S15 and S16. *Not including China.

Just over 60 countries were served with non-stop flights this summer. New country markets added during the last 12 months include New Zealand, the Seychelles and South Africa. Air China began flights to Johannesburg last October and Auckland last December, while Air Seychelles began a weekly service in February of this year.

New Zealand became a new country market for Beijing Airport during the last 12 months with the launch last December of non-stop flights to Auckland with Air China. The service is operated in conjunction with Star Alliance partner Air New Zealand, which had previously flown the route between July 2008 and June 2012.

As the airport serving the country’s capital, Beijing Airport has an extensive domestic network. This summer it offers flights to over 120 destinations in the rest of China, a figure which has grown during the last 12 months with the addition of eight new destinations, not previously served. These are summarised in the following table.

New international routes already planned to start between now and the end of the year include Air China heading for Warsaw (starting this week), Hainan Airlines venturing into Las Vegas in December, and Delta Air Lines offering non-stop service from Los Angeles. Manchester became the second UK airport to be served non-stop from Beijing with the introduction on 10 June 2016 of Hainan Airlines’ new four times weekly A330-300 service. London Heathrow is already served by Air China (double-daily) and British Airways (daily).