Arkia Israeli Airlines, UT air and Motor Sich Airlines have all commenced flights to Minsk, the capital of Belarus, during the past year, with the first two airlines being greeted with a water arch salute on their arrival. From the looks of the Motor Sich Airlines aircraft, it may have been too cold to have performed the world renowned baptism of service on the day of its inauguration. These three new carriers have helped capacity to Belarus grow by 32% during the past year.

Belarus, a landlocked country in Eastern Europe, is known for its Stalinist architecture, grand fortifications and primeval forests. 2016 estimates suggest that the nation’s population is currently around 9.5 million, while its GDP is about $45.9 billion (US). Around two million people – a little over 20% of the population of Belarus – live in the country’s capital, Minsk, which according to OAG schedules is home to the only commercial airport in Belarus. Although OAG schedules indicate that Minsk is the sole airport of Belarus, it should be noted that Gomel, Hrodna and Brest airports in the country also offer seasonal flights throughout the year, with a majority of them being charters. Another factor to consider is that Minsk was also served by another airport – Minsk-1 – until it closed on 23 December last year. There are also multiple military airports in the nation.

With OAG schedules showing Minsk as the only airport in Belarus with scheduled flights, anna.aero’s data elves have just looked at the capital airport’s traffic total to get a general idea of the country’s traffic development.

During the past decade traffic to Belarus’ capital has grown 396% from 0.56 million in 2005 to 2.78 million last year. As a result Minsk Airport has managed to achieve an average year-on-year increase in traffic of 20%. Last year was the first time in which Minsk has not registered a double-digit increase in growth since 2009. What should also be noted is that 2013 was the year in which the airport’s annual passenger total surpassed the city’s population size. 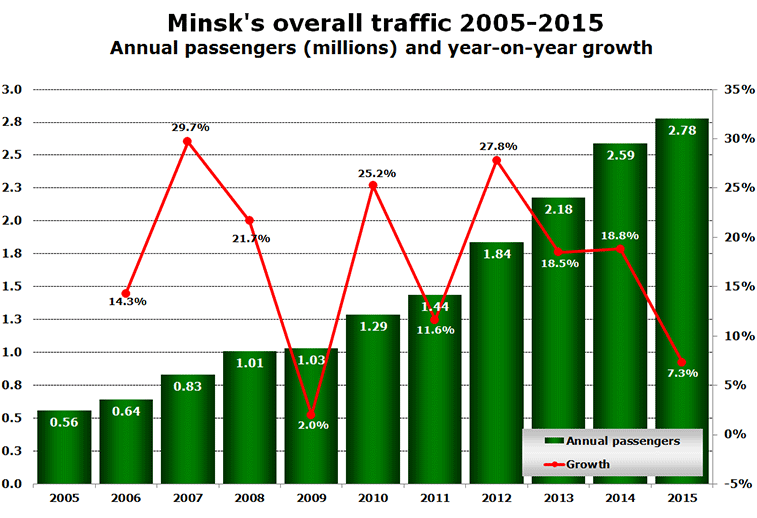 Belarus does have a national airline – Belavia. The flag carrier this October commands 64% of seat capacity from its home nation, with its operations being 580% larger than the second largest airline – Aeroflot. One of Belavia’s recent new routes from Minsk was to Moscow Zhukovsky, the Russian capital’s latest commercial airport. Belavia is the first carrier to operate a regular scheduled service into Zhukovsky. This latest launch is one of the factors helping the flag carrier report a near 28% increase in seats when compared to last year from its home market.

Three new carriers during the past 12 months

During the past year Belarus has welcomed the arrival of three new airlines, namely Arkia Israeli Airlines, UT air and Motor Sich Airlines. Although Turkmenistan Airlines is new for October 2016, it did operate to Minsk last year with a weekly Saturday service. However it took a break on the route from Ashgabat between 29 August and 5 December when referring to OAG schedules. As well as Turkmenistan Airlines, UT air and Motor Sich Airlines have made it into Belarus’ top 12 airlines (highlighted in light green). 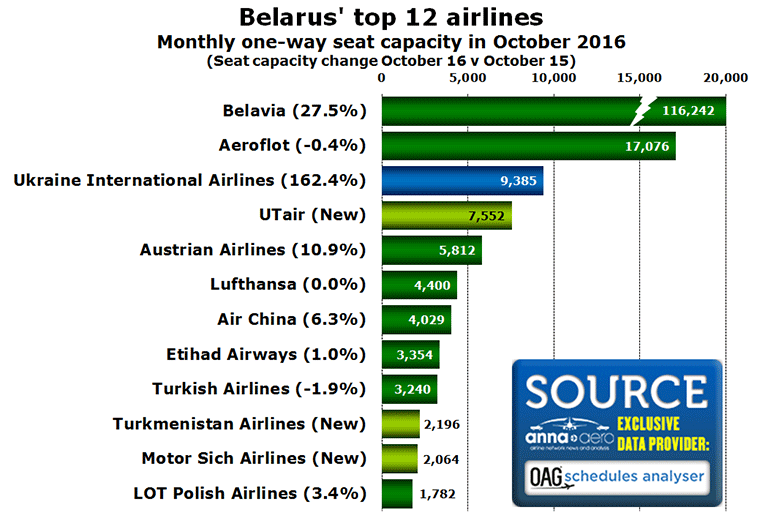 Since October 2015 the fastest growing airline from Belarus is Ukraine International Airlines (highlighted in blue), with the carrier having grown its capacity to the nation by just over 162%. The result of this increase is due to the airline growing the frequency on its link between Minsk and Kiev Boryspil from eight times weekly to thrice-daily.

Outside of the top 12 a further four airlines serve Belarus, with one of them being new carrier Arkia Israeli Airlines. The remaining three carriers are: Azerbaijan Airlines (13th largest carrier; 20% growth in seat capacity); Uzbekistan Airways (14th; -16%); and airBaltic (15th; 17%).

During the past year it appears that two country markets are no longer served directly from Belarus. Belavia ended flights between Minsk and Yerevan on 7 February this year, while last year Bulgaria Air linked the Belarusian capital with Bourgas. As a result of these route losses it means Armenia and Bulgaria are no longer non-stop markets from Belarus. 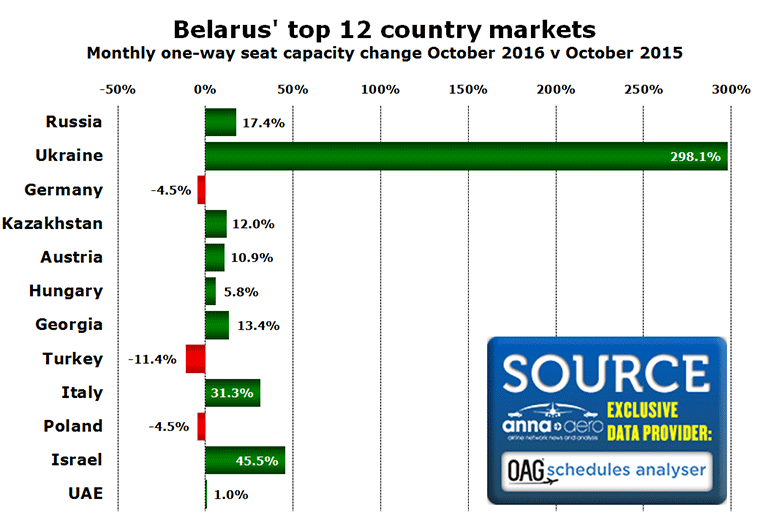 The best performing market for growth during the past year is Turkmenistan (13th largest market), with capacity between it and Belarus up 402%. The reason for this vast growth is due to Turkmenistan Airlines operating its thrice-weekly service throughout October this year, accompanying Belavia’s weekly (Tuesday) flight on the Minsk – Ashgabat sector. The only other market to register a triple-digit growth in seats is Ukraine – Belarus’ second largest market – with capacity up by nearly 300%. 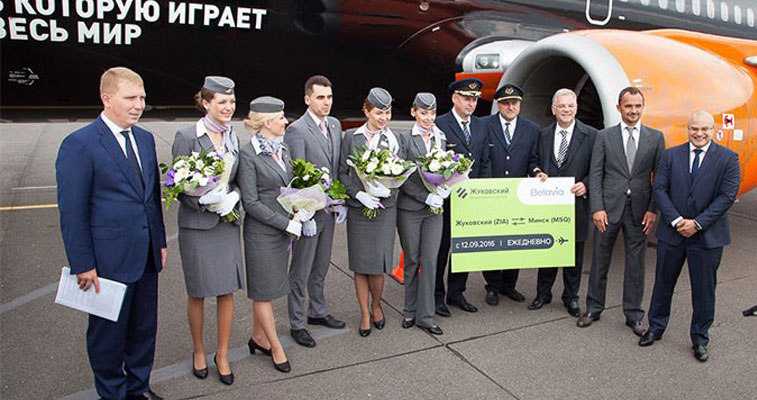 The latest launch by flag carrier Belavia from the Belarusian capital was a 676-kilometre sector to Moscow Zhukovsky, the Russian airport’s first scheduled service. As a result of the airline’s pioneering service, the airport pair won the coveted anna.aero Route of the Week award.