Impact of Norwegian air passenger tax not yet discernible in airport passenger statistics; Oslo Gardermoen traffic up 4% in 2016 Norwegian has revealed that Roald Dahl will become the first person from the UK to be honoured with a tailfin design. The announcement was made last week on the 100th anniversary of the author’s birth. Born in Cardiff of Norwegian descent, Dahl is one of the UK’s most popular authors.

At the beginning of June, the Norwegian government introduced a new air passenger tax for all flights from Norwegian airports. With data now available for June, July and August, the impact of the tax, which amounts to NOK 80 ($10) for flights to destinations outside Norway and NOK 88 ($11) for flights within Norway, is not yet clear to see from traffic data across Norway’s top 10 airports. 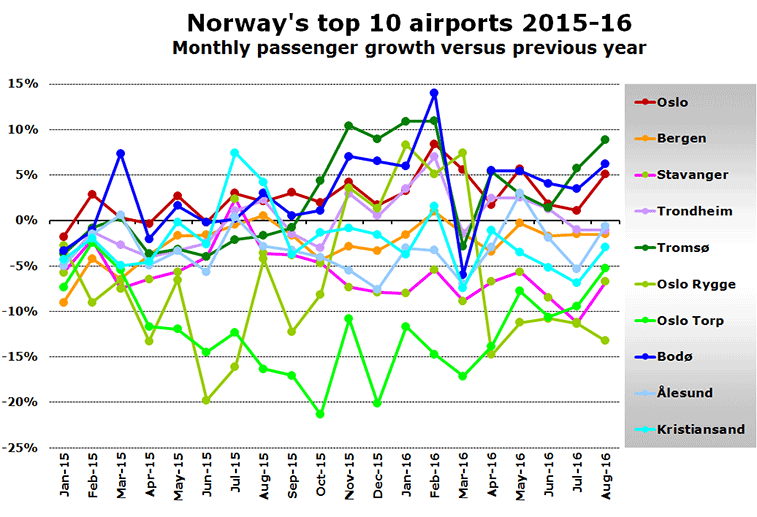 Norway’s biggest airport at Oslo Gardermoen has continued to report traffic growth every month this year. However, the two nearby airports served primarily by LCCs at Torp and Rygge have seen passenger numbers down between 5% and 15% during the summer months. The introduction of the tax has resulted in Ryanair deciding to close its Rygge base this winter which may result in the closure of the airport itself. Some flights will transfer to Torp, while London Stansted and Vilnius flights will transfer to Oslo Gardermoen, Ryanair’s first ever routes from that airport.

Apart from Oslo Gardermoen, the other airports that have performed consistently well in 2016 are Bodø and Tromsø. These two airports have reported growth every month this year so far, except for March. Year to date figures show that Oslo Gardermoen traffic is up 3.9%, while Bodø is up 4.3% and Tromsø is up 5.5%.

SAS and Norwegian both growing summer capacity by 5-6%

Analysis of OAG Schedules Analyser data for S16 and S15 shows that among the top 12 airlines serving the Norwegian market the country’s two biggest airlines, SAS and Norwegian, have both increased their seat capacity this summer by between 5% and 6%. Despite the fact that six of the top 12 airlines have cut capacity, overall capacity among these airlines is up 3.3%. Ryanair and Lufthansa have both cut capacity by more than 10% this summer. The German carrier has increased flights and seats this summer on its Oslo routes to Frankfurt and Munich, but dropped its thrice-daily service between Stavanger and Frankfurt at the end of S15. 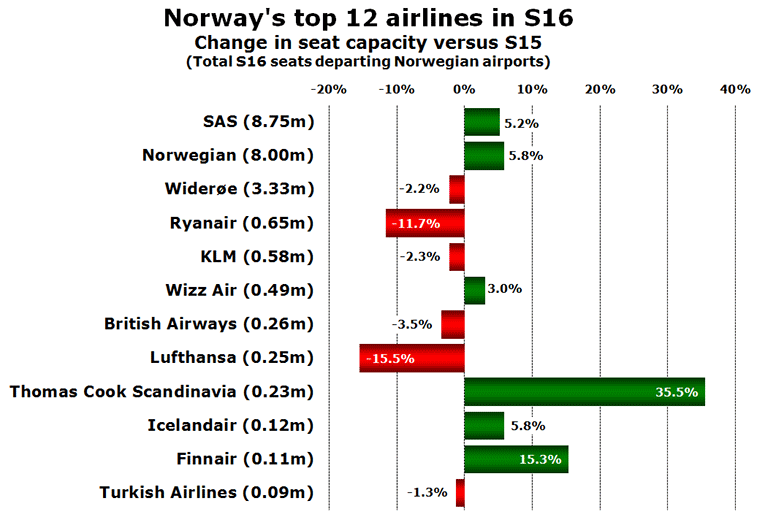 Capacity to Belarus grows 32% in 12 months

New routes that have already been announced as starting from Norwegian airports in the coming months include: 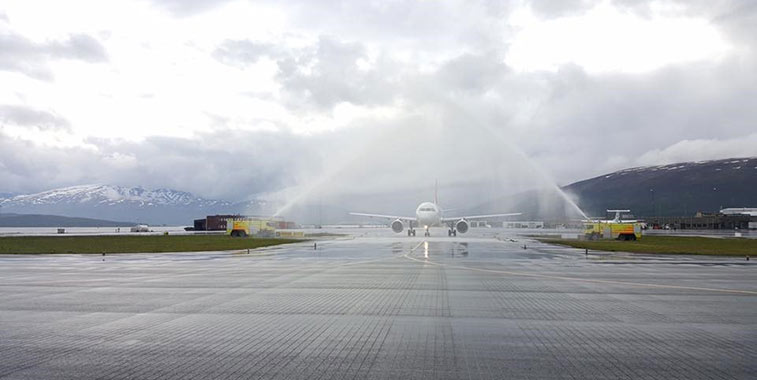 Tromsø celebrated the arrival of a new service from Zurich operated by Helvetic Airways on 24 June with this water arch salute. The weekly seasonal service was operated by an A319. Tromsø is the fastest-growing major airport in Norway this year with passenger numbers up 5.5% from January to August.