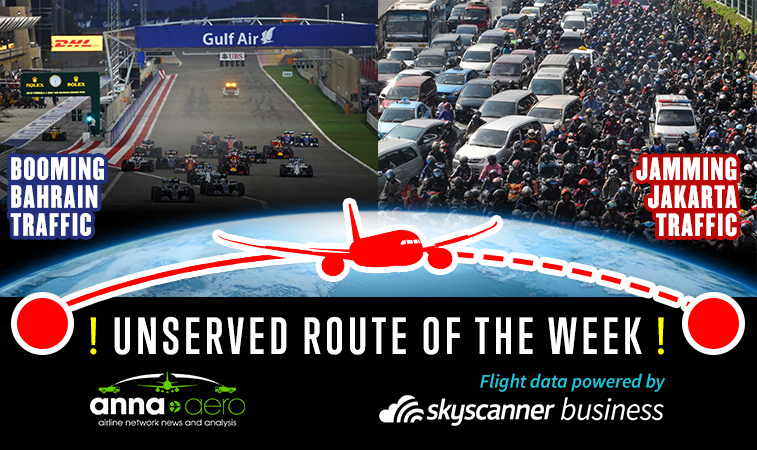 Vroooom! There were 90,000 searches on Skyscanner last year for the Bahrain-Jakarta service. Add that to searches made directly with the airlines and other sites and you’ll get an even bigger number! anna.aero puts Gulf Air and Garuda Indonesia on the front row of the grid as favourites to serve this route, followed by Indonesia AirAsia X (just some of the potential airlines Bahrain Airport is talking to about this route).

With over 90,000 searches in the last year, a potential new route from Bahrain to Jakarta has been identified as this week’s “Skyscanner for Business-anna.aero Unserved Route of Week” – a powerful new kind of analysis based on aspirational data captured from the Skyscanner.net flight comparison site used by +50 million unique visitors per month. “Jakarta is one the largest potential destinations which is currently not served by any carrier from Bahrain, so we’re definitely looking for potential airlines to operate the route,” confirms Nawal AlMajed, Head ‒ Route Development at Bahrain Airport. “In the last five years traffic to Jakarta from Bahrain grew by 84% to 25,000 passengers in 2015, up from 13,000 passengers in 2011.”

This week’s route analysis comes after Austrian Airlines announced it will start flights from Vienna to Los Angeles from next April just days after last week’s “Unserved Route of Week” was promoting another Vienna to California link – namely to San Francisco. So anna.aero’s and Skyscanner’s data elves hereby take partial credit for reinforcing the Austrian flag carrier’s decision to start the route. Hopefully the same can happen this week for Bahrain. 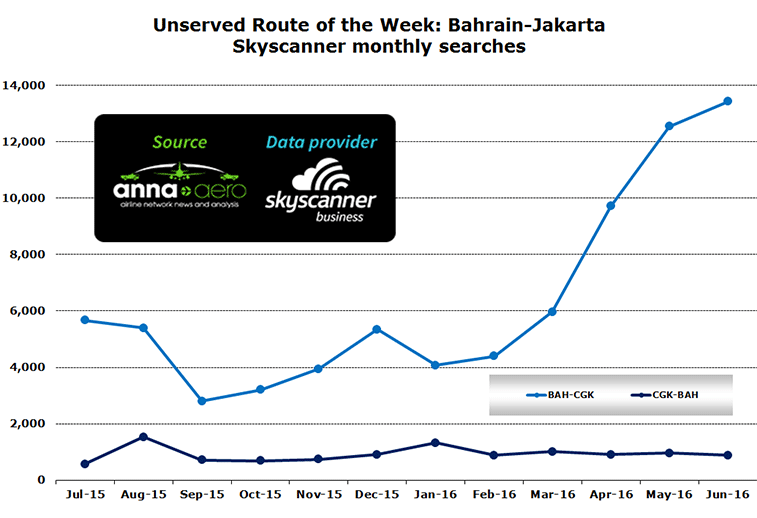 With the traffic on this route indicating an 87/13 split in favour of Bahrain, the potential carriers at the Middle East end of the route were therefore considered first. Unsurprisingly, the national carrier Gulf Air is currently the largest airline with a 56% share of weekly seats at Bahrain, according to OAG schedules data for the week commencing 19 September. While Gulf Air does operate to two destinations in the Southeast Asia region (Bangkok Suvarnabhumi and Manila, both daily) – it does not currently operate to any city in Indonesia. Indeed, most of Gulf Air’s recent network expansion has been in South Asia, with flights opened up to Multan and Faisalabad in Pakistan (December 2015) and Dhaka in Bangladesh (May 2016), so a new service to Jakarta will require a change in the airline’s recent network strategy mentality.

Taking a look at Bahrain’s second and third largest airlines based on weekly seats, both are MEB3 carriers. Emirates is the #2 carrier at the airport (7.4% share), while Qatar Airways is number #3 (6.4% share). Both carriers are flying multiple daily sectors to their own respective hubs and are more likely to filter traffic to Jakarta through these points instead (see transfer traffic below) were they to get traffic rights.

Contemplating the Indonesia end of the route, Garuda Indonesia has a 30% weekly share at Jakarta. The SkyTeam airline also has existing services to the Middle East although these are limited to twice-weekly flights to Jeddah, although this is still market experience which could help it expand its reach in the region. The #2 airline at Jakarta, Lion Air, also has wide-body equipment, but all three of its A330-300s and two 747-400s are currently flown on behalf of Saudi Arabian low cost carrier flynas. Looking further down the list of largest carriers at Jakarta, the next three have exclusively narrow-body kit – Batik Air, Sriwijaya Air and Citilink ‒ so the next potential airline is Indonesia AirAsia, or more precisely its long-haul sister Indonesia AirAsia X, which flies A330s. Significantly AlMajed confirms “Garuda Indonesia and Indonesia AirAsia X are two of the potential airlines we are looking at for this route.”

When looking at the previous year of search data, the busiest month for potential traffic flows (for both directions on the route combined) is June 2016, with over 14,000, nearly 11,000 higher than the lowest monthly figure, which was recorded in September 2015 (3,500). The seasonality profile of this search data is even more extreme than last week’s Unserved Route of the Week (Vienna to San Francisco), with the low-month traffic representing just 25% of the highest month. According to OAG Traffic Analyser, because there is no direct service, the top three connecting options chosen by those passengers who did book travel between Bahrain and Jakarta in the past year indicates that the majority of connecting passengers use Doha (33%) Dubai (20%) and Abu Dhabi (17%). Interestingly, looking at traffic flows in the opposite direction, while the top three remain unchanged, both Doha (37%) and Dubai (27%), have seemingly increased their share, at least partially, at the expense of Abu Dhabi, which has fallen (14%).

An O&D that is not served by a non-stop flight will typically display a low purchase rate and low traffic. In this instance Skyscanner’s Travel Insight indicates a monthly average of 4.5% for the Bahrain and Jakarta route (see graph below). Therefore, if there was a Bahrain and Jakarta route, and if bookings performed in line with the “Skyscanner market average” for direct services at both airports (6.7%), the airline operating this route could immediately expect an improved purchase rate of 48%, without any increased marketing spend. However, with nearly 90,000 annual searches, the potential city pair should already be very sustainable at around a three to four times weekly frequency. 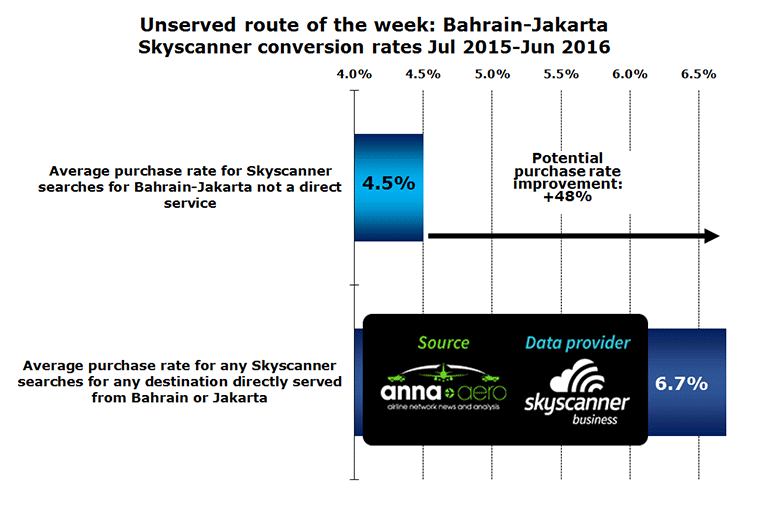