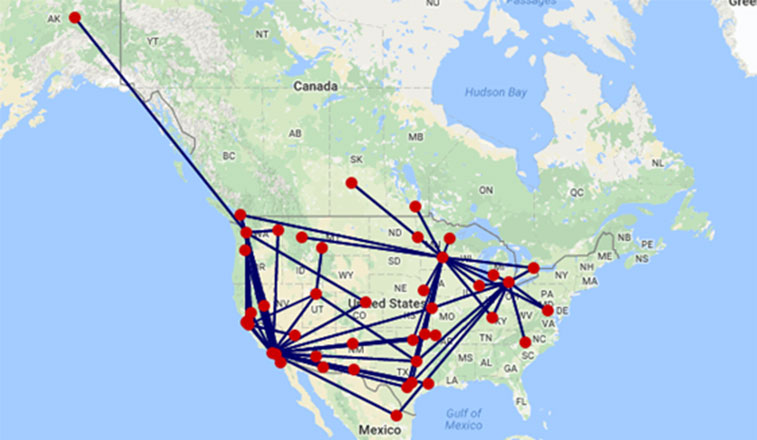 Compass Airlines operates a total of 66 routes across 44 airports with 62 aircraft in its fleet. During the past year a total of 10 airports have been dropped and gained from the carrier’s personal route map. Its main bases are Los Angeles (American Eagle), Minneapolis-St. Paul and Seattle-Tacoma (both Delta Connection). Although it is the airline’s 12th largest airport, the carrier operates 10 routes from Detroit.

Compass Airlines launched its inaugural operation with one CRJ 200 under the Northwest Airlink brand (now Delta Connection) on 3 May 2007, with a link between Minneapolis-St. Paul and Washington Dulles based on OAG schedules. By the end of 2007 the airline was operating to 17 destinations from its Minneapolis-St. Paul base. Today Compass Airlines has six E170s and 56 E175s in its fleet (as of September 2016) with an average age of 2.7 years. Of those, 20 E175s are operated for American Eagle out of Los Angeles, while the remaining 36 E175s and six E170s are flown for Delta Connection from Minneapolis-St. Paul, where the airline’s headquarters are also located, and Seattle-Tacoma.

Compass Airlines only started operating for American Eagle in Q1 of 2015 after gaining a contract to operate 20 E175s for the airline. Before then it just operated for Delta, and before that for Northwest Airlines, before the latter’s operations were merged with the former carrier. The three airports mentioned are the carrier’s only operating bases according to its website. Its website also states that the carrier flies around four million passengers annually on an average of over 180 daily departures.

In October 2014 Compass Airlines had just over 440,000 monthly departing seats. This October, the carrier is operating a little over 670,000, meaning that the American Eagle operating contract has helped Compass Airlines grow its seat capacity by 52% during the past two-year period. Taking away the airline’s first year of operations, where its growth was exceptional due to it only being its first year, the average year-on-year increase in capacity for the carrier is 9.7%. 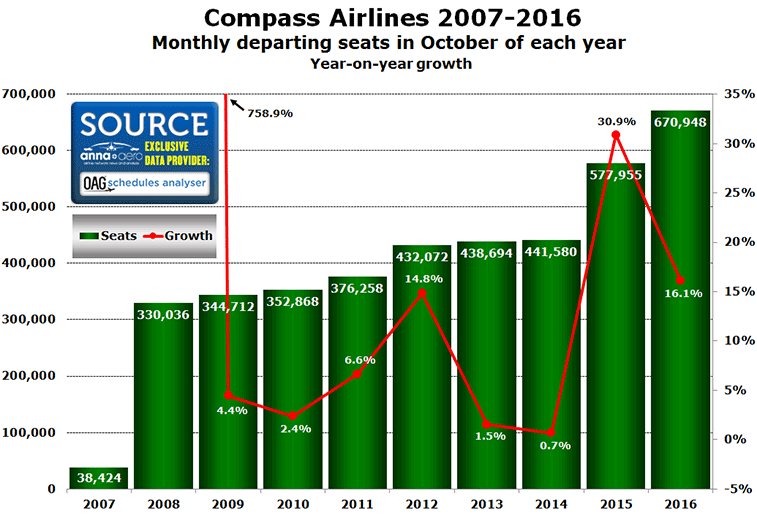 With Los Angeles, Seattle-Tacoma and Minneapolis-St. Paul being Compass Airlines’ three operational bases, it comes as no surprise to see that they are the largest airports for the airline this October. Los Angeles, the largest of the three, occupies a little under 32% of Compass Airlines’ monthly seat capacity in October, up from the 29% majority it had in the same month last year. Before it operated for American Eagle, Los Angeles was Compass Airlines’ second largest airport. Minneapolis-St. Paul’s capacity share remains unchanged during the past 12 months, with it holding a firm second place with 8.3%. Seattle-Tacoma has seen its capacity share grow from 7.6% to 8.0% during the same period, allowing it to remain in third spot. Two airports in the top 12 (highlighted in light green) have seen a triple-digit growth in capacity by the carrier. Outside of the top 12 a further four airports have welcomed triple-digit growth, namely: Kansas City (141%; 15th largest airport); Phoenix (222%; 22nd); Oakland (6700%; 25th); and Washington Dulles (636%; 31st). 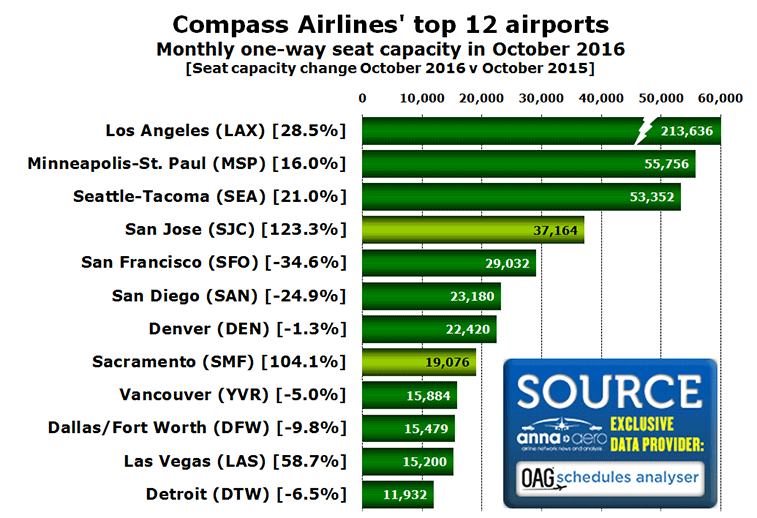 During the past year 10 airports have been dropped from Compass Airlines’ schedule, with 10 others being gained. With Compass Airlines being an operator for Delta and American, it does not necessarily mean that the airport has been dropped by one of the airlines altogether, but moved to another venture or its own mainline aircraft. When referring to OAG schedules, the following airports are no longer served by Compass Airlines; New York Newark, Fresno, Kalispell, Raleigh-Durham, Wichita, Columbus, Minot, Boise, Green Bay, and Philadelphia. Airports that have been picked up by the airline during the past 12 months include; Santa Ana (17th largest airport operation for the airline in October 2016, Albuquerque (24th), Winnipeg (29th), El Paso (34th), Toronto Pearson (35th), Tulsa (36th), Fargo (40th), Charlotte Douglas (CLT), Bozeman (42nd) and Duluth (44th).

Compass Airlines’ largest sector is between Los Angeles and San Francisco, with the route occupying 7.6% of the airline’s overall capacity this October. This route is also operated by mainline American and Delta, with Compass Airlines’ overall capacity share on the route between the three carriers making up just under 33%. American occupies 35% and Delta 32% respectively. As well as Los Angeles to San Francisco, a further six of its top 12 routes (all highlighted in light green) also see either American or Delta mainline operating the same sector. 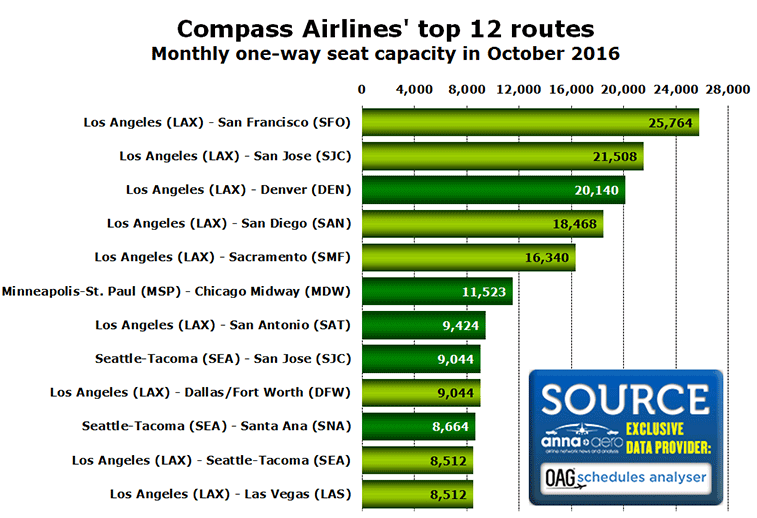 In total Compass Airlines operates 66 routes for American and Delta. Of those routes, 25 originate from Los Angeles, 18 from Minneapolis-St. Paul and nine from Seattle-Tacoma when analysing OAG schedules. 10 of the remaining 14 which do not link to an operating base are flown from Detroit, suggesting that this is also a station for the carrier despite it only being the 12th largest airport operation for the airline. The Michigan airport occupies just 1.8% of Compass Airlines’ monthly seats in October. The four remaining routes which do not go through either Detroit, or the airline’s three operational bases, are: Las Vegas-San Jose (16th largest route); Salt Lake City-Dallas/Fort Worth (51st); Salt Lake City-Bozeman (59th); and Salt Lake City-San Jose (63rd).

Looking ahead to W16/17 it would appear that Compass Airlines has just one new route planned, with that being an offering from Delta Connection. The airline is currently scheduled to inaugurate flights between Seattle-Tacoma and Sun Valley in Idaho from mid-December. Looking one step further into S17, there does appear to be another route planned by Delta Connection from its Seattle base, with that being a link to Eugene in Oregon which is currently pencilled in to start on 1 April. 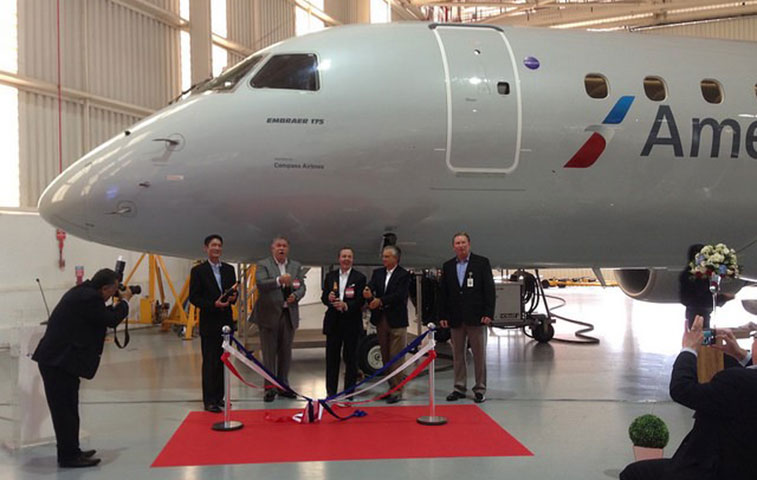