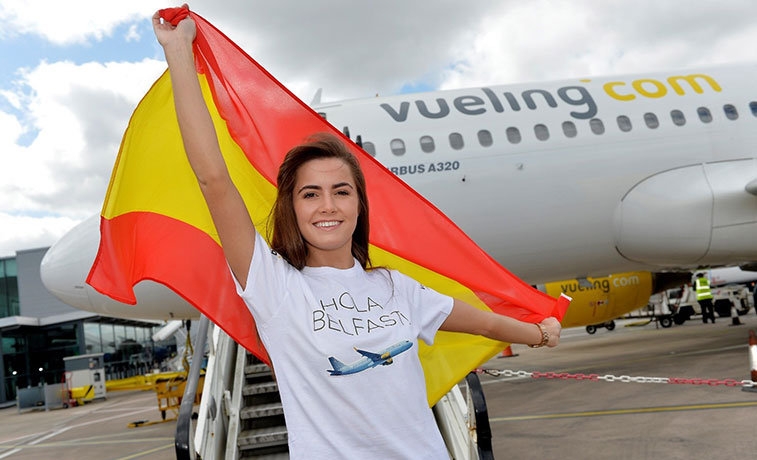 Belfast City Airport welcomed Vueling’s inaugural service from Barcelona on 7 May 2015. Weekly frequency was between two and three during the summer period. According to UK CAA data a total of 10,456 passengers flew the route last summer. Using OAG data to determine seat capacity, this suggests the route operated at a load factor of 46% across the season. The route is one of 39 that Vueling chose not to operate this summer after operating in S15.

Barcelona-based Vueling has grown amazingly quickly in the last six years. In the summer of 2010, after completing its merger with local rival clickair in 2009, Vueling was operating just under 100 routes during the peak summer period of early August. Six years later that number had risen to just under 400. Analysis of OAG Schedules Analyser data for the period August 2010 to August 2016 reveals that Vueling has operated 602 routes during that period. This includes 16 routes that apparently operated just once and a further 13 that operated just twice.

Clearly Vueling, like all carriers, regularly reviews its network and identifies routes that are failing to meet their financial targets. Between S15 and S16 the airline’s network has increased by 28 from 363 routes to 391. However, this rather disguises the fact that 67 routes were added but, more significantly, that 39 were dropped. 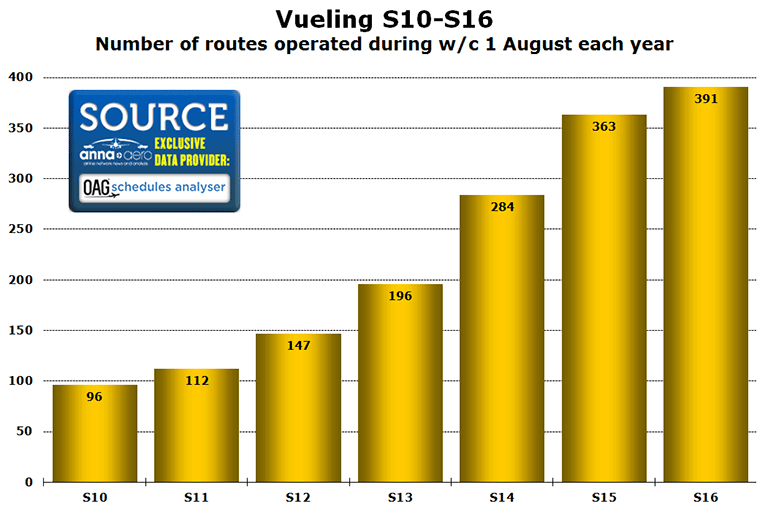 Source: OAG Schedules Analyser for w/c 1 August of each year. 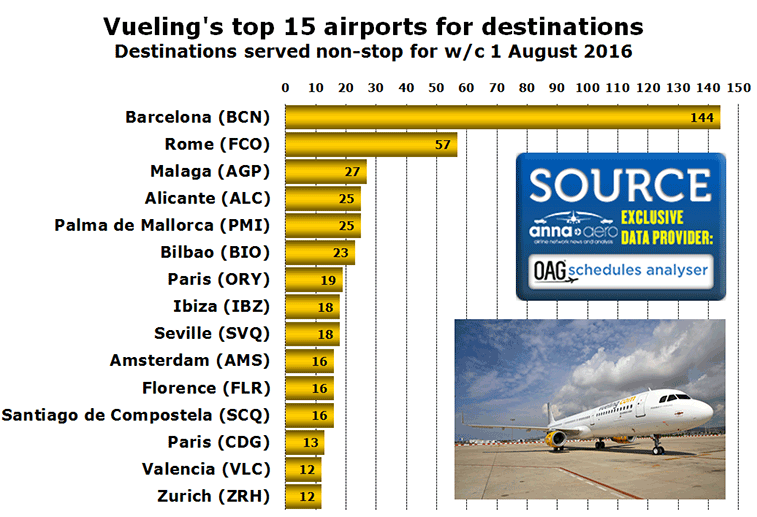 Rome Fiumicino is Vueling’s second biggest base with almost 60 destinations served. Six of the seven next best-connected airports are in Spain, with Paris Orly the exception. Vueling serves 19 destinations this summer from Paris’ second busiest airport while also serving 13 destinations from Paris CDG.

Using OAG Schedules Analyser data, anna.aero has identified 39 routes that operated last summer (w/c 3 August 2015) but were not operating this summer (w/c 1 August 2016). These are summarised in the following table, grouped by country-pairs.

All of these dropped routes (with one exception) involve airports in either Italy or Spain. A total of 42 airports have seen at least one Vueling route suspended this summer. Of those, 27 have lost just a single route while seven airports have lost two routes. Rome Fiumicino has seen nine Vueling routes dropped, Barcelona six, Paris Orly five, Genoa and Turin four each, with Bilbao, Santiago de Compostela and Tenerife North each losing three Vueling services.

Some of the dropped routes are already very well served. For example, on the Madrid to Bucharest route this summer, Vueling would have been competing against two flag-carriers (Iberia and TAROM) and three other LCCs (Blue Air, Ryanair and Wizz Air). On the Rome to Brussels route Vueling would have faced competition from Alitalia, Brussels Airlines and Ryanair this summer, while the Rome to Budapest market is already served by Alitalia, Ryanair and Wizz Air.

In addition anna.aero has identified a number of routes that started this summer but which were all suspended in the middle of July according to OAG data. These include: Barcelona to Constantine (in Algeria), Barcelona to Vilnius, Paris CDG to Bari and Amsterdam to Catania. 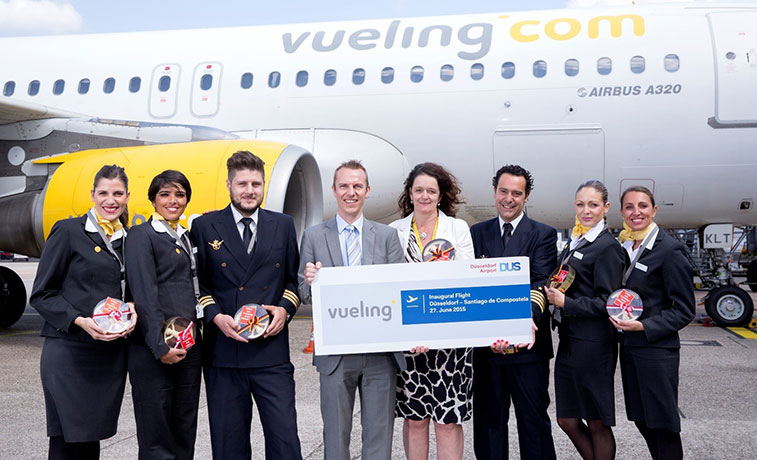