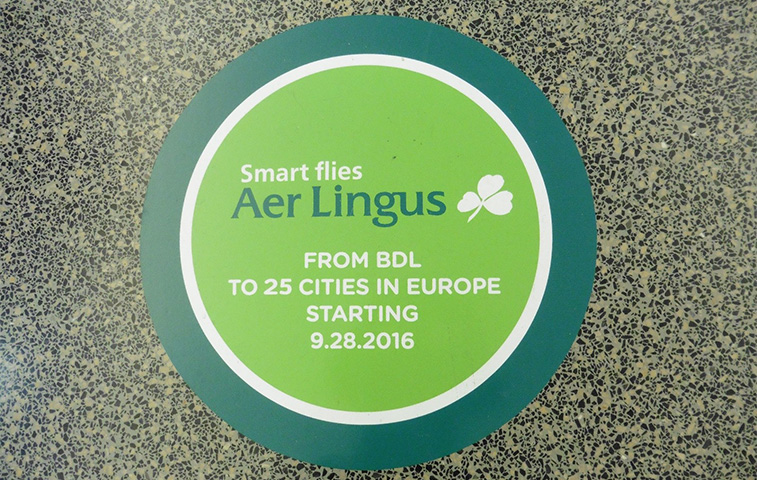 The wait is over. On 28 September Hartford Airport (known locally as Bradley International Airport) was once again connected to Europe with a non-stop service. The last carrier to operate such a service was Northwest Airlines which flew to Amsterdam from 1 July 2007 until 30 September 2008 using a 757.

After an eight year wait, Bradley International Airport serving Hartford in Connecticut, welcomed back transatlantic services on Wednesday 28 September when an Aer Lingus 757 (operated by ASL Airlines Ireland) arrived at the airport from Dublin. On board was anna.aero’s very own Chief Analyst, Ralph Anker, fresh from his return from World Routes in Chengdu the previous day. The new service will operate daily during the remainder of the summer season, reducing to four flights per week during the winter season. Ralph would like to thank Declan Kearney (Director of Communications) and Paula Donaghy (Consumer PR Specialist) from Aer Lingus for making this trip possible. The inaugural flight to Hartford (EI131) departed Dublin at 14:40. Having arrived on the morning flight from Birmingham, Anker was able to go through US Customs Preclearance in Dublin. However, this took a bit longer than expected and meant he was one of the last to board the flight. Despite that brief hold-up, there was still time for a quick selfie of the 757-200, operated by ASL Airlines Ireland, that would operate the service. The flight to Hartford was scheduled for around six hours and 45 minutes. The routing was to the south of both Iceland and Greenland, with Labrador in Canada the next land mass to be crossed after leaving Ireland. Despite cloud for much of the flight the Goose Bay Airfield in Labrador was observed from Anker’s seat of 22F. Oooh, yummy! Early in the flight a late lunch was served (“beef or chicken?”), while an hour before landing there was a chicken sandwich. At least Anker could spread the Irish butter on his slice of bread this time. On the previous day’s British Airways flight from Chengdu to London a combination of a soft and flaky roll and frozen butter had resulted in a rather frustrating experience. Nearly there. Downtown Hartford could be seen in the distance as the flight prepared to land on an overcast Wednesday afternoon. A Southwest Airlines pilot got a surprise as he had to wait for the first ever Aer Lingus service to land before being cleared for take-off. You know what’s coming …! Passengers were informed about the traditional water arch salute for a new service which was duly delivered by two of Bradley International Airport’s finest. See how Hartford Airport’s FTWA compares to others from around the world. 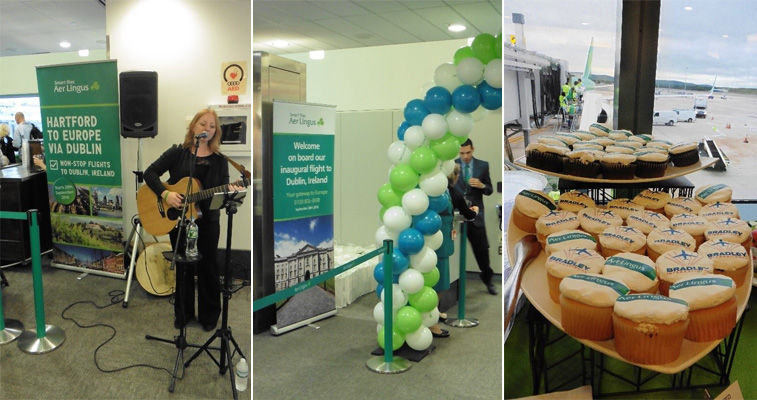 On arrival at the gate, passengers were waiting for the first outbound flight from Hartford. There was music (Irish, of course), balloons and cupcakes. The cabin crew from the inaugural flight from Dublin were greeted enthusiastically when they emerged from the airbridge. 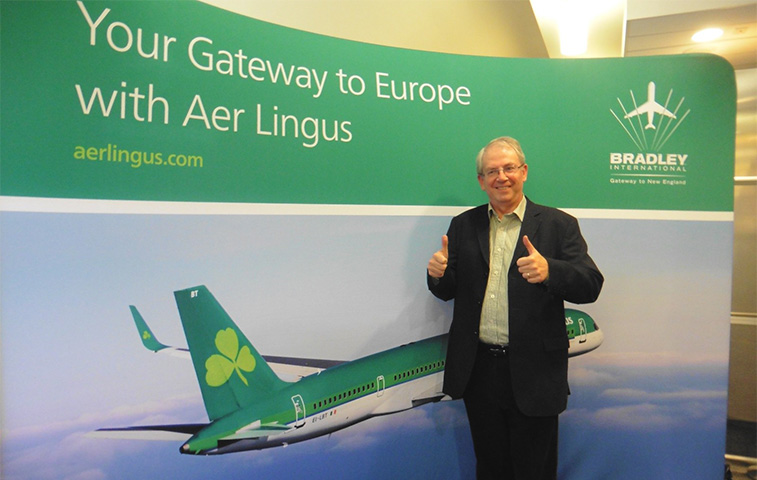 Yes, he actually was there. Getting from Chengdu to Connecticut in 40 hours meant that our Chief Analyst was probably a bit confused as to what time it was. While preparing for this picture the local CBS TV network came up for a quick chat. Whether Anker’s rambling comments made it on air in the end is unknown. On the way to collect his luggage, Anker came across the official launch ceremony for the first Dublin-bound flight. Unfortunately he only caught the end of it and couldn’t really hear what was being said. However, there was a helpful map and more cupcakes. 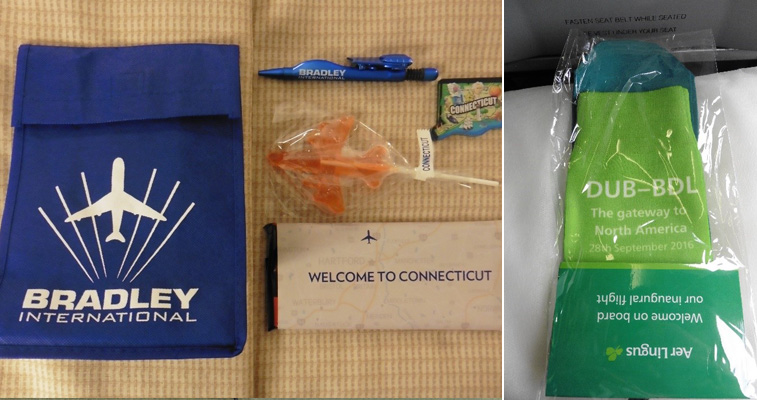 Free stuff! Passengers on the inaugural flight were given souvenir socks by Aer Lingus, while in the baggage reclaim area at Bradley, staff handed out goody bags comprising: chocolate (Hersheys); a lolly (in the shape of a plane); a novelty pen; and a Connecticut fridge magnet. Perfect!