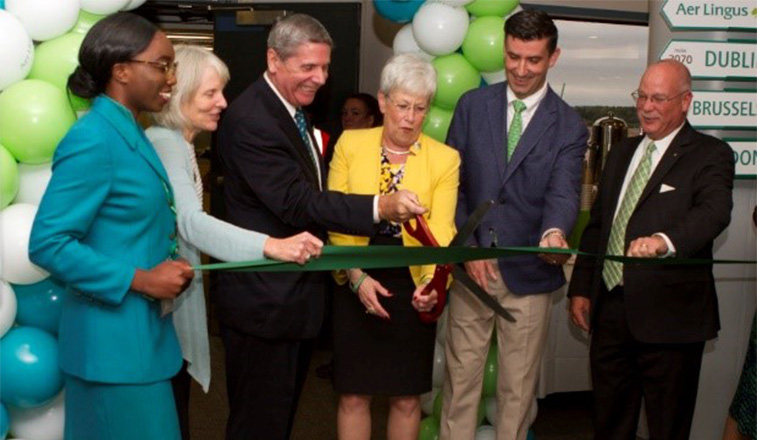 There was a ribbon-cutting ceremony to celebrate the return of transatlantic services to Bradley International Airport on 29 September. Involved in the event were: Catherine Smith, Commissioner of the Connecticut Department of Economic and Community Development; Jack Foley, VP North America, Aer Lingus; Lt. Governor Nancy Wyman; Charles Gray, Connecticut Airport Authority Board Chair; and Kevin Dillon, Executive Director and CEO of Connecticut Airport Authority. The airport’s last non-stop service to Europe was operated by Northwest Airlines to Amsterdam in the summer of 2008.

Located 20 kilometres north of Hartford, the state capital of Connecticut, Bradley International Airport is the busiest in the state. The airport lies almost exactly between Boston (150 kilometres to the east) and New York LaGuardia (165 kilometres to the south-west). Last week saw the airport regain transatlantic services for the first time in eight years, with Aer Lingus launching a four times weekly service from Dublin using 757s. This marks a significant moment in the history of the airport which is named after a US airman who died in a training accident in 1940. In recent years passenger numbers have hovered around the six million mark, though back in 2005 the airport handled 7.5 million annual passengers. 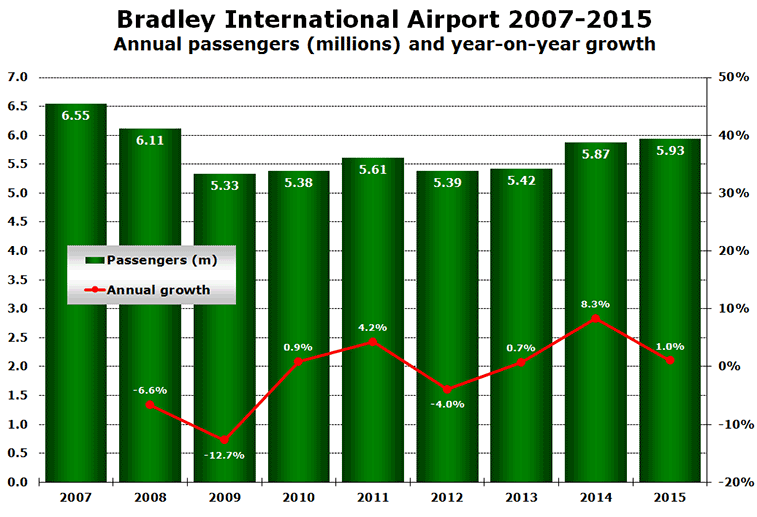 Hartford passengers up less than 1% so far in 2016

Figures for the first seven months of this year show that passenger numbers are up less than 1%. The arrival of the Aer Lingus service is unlikely to have a major impact on the passenger figures for the rest of the year. The airport scores an “Excellent” 0.91 on anna.aero’s Seasonal Variation In Demand (SVID) calculator, reflecting consistent demand across the year. In 2013 and 2015, May was the airport’s busiest month, but in 2014 July saw the highest number of passengers passing through the airport. 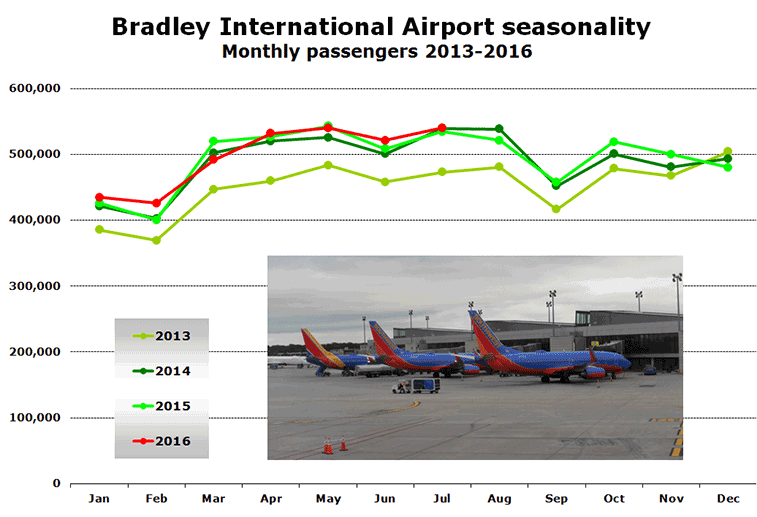 BDL served by the big four US airlines, JetBlue and Air Canada

Based on figures published by the airport, the busiest airlines at the facility are Southwest Airlines, American Airlines and Delta Air Lines. Coincidentally, all three of these carriers currently operate non-stop service to seven destinations this summer. There is direct competition on several routes, notably Denver, Fort Lauderdale, Orlando, Tampa and Washington Reagan, while there is indirect competition to Chicago, with Southwest serving Midway and American and United Airlines both operating to their major hubs at O’Hare.

Apart from the new Aer Lingus service, Air Canada operates flights to both Montreal and Toronto Pearson but using Beech 1900 (operated by Air Georgian) and Bombardier Dash 8-100 aircraft (operated by Jazz Aviation). In recent years Hartford has also been served by Continental Airlines, Northwest Airlines and US Airways (all now merged into other carriers), as well as Frontier Airlines and Midwest Airlines.

Atlanta is still #1 route from Hartford

According to US DOT figures, Atlanta remains the airport’s single busiest route, served up to seven times daily by Delta. However, passenger numbers on the route have fallen in recent times after Southwest Airlines pulled off the route in April 2015, a service it inherited from its merger with AirTran Airways. 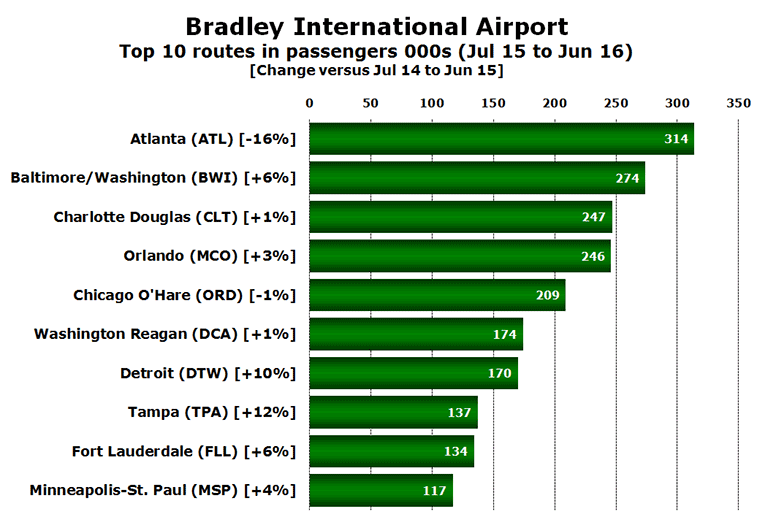 Route developments during the last 18 months have seen American drop its Pittsburgh route, but this was quickly taken up by OneJet, which began operating the route with a twice-daily (Mondays to Fridays) service on 13 June. Also in June, American began non-stop service to Los Angeles, which at 4,054 kilometres was the airport’s longest non-stop service until the launch of Dublin flights last week. The Irish route clocks in at 4,937 kilometres. Back in April United began a daily service to Denver, taking on Southwest which had previously had the route to itself.

Fare data from the US DOT for 2015 shows that Hartford’s average air fares have been slightly above the national average, despite the fact that low-fare pioneer Southwest is the leading airline, with fare premiums of +1% in Q1, +6% in Q2, +7% in Q3 and +7% in Q4. American Airlines is the second biggest carrier at Bradley International Airport after Southwest Airlines. On 2 June 2016 the oneworld carrier began a daily service from Hartford to Los Angeles. The 4,054-kilometre sector beat the previous longest route at the airport which was Southwest Airlines’ 3,685-kilometre route to Las Vegas.