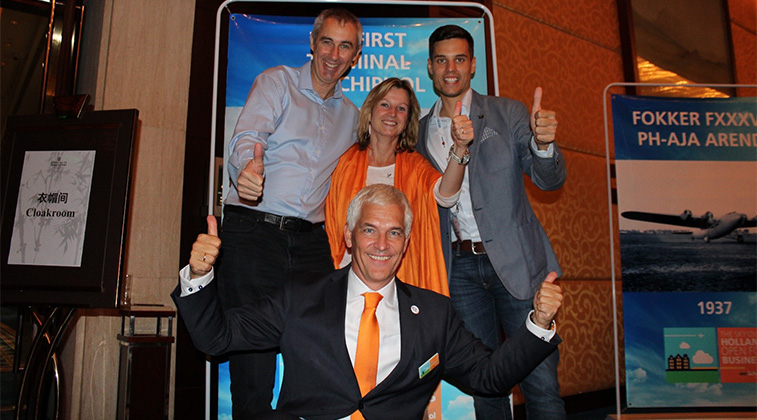 Last week at World Routes in Chengdu, Amsterdam Airport Schiphol celebrated its 100-year anniversary by hosting the Saturday evening reception at the Shangri-La Hotel. Amongst the attendees to the evening’s celebration were part of the team from Budapest Airport, which recently welcomed the news that easyJet will connect the Hungarian capital to Amsterdam. So of course it was a celebration for Budapest, and a double celebration for the host. Seen giving their thumbs-up approval to the carrier’s new service are (from right): Máté Ritter, Airline Development Manager, Budapest Airport; Lotte Harbers, Aviation Marketing Director – Southern Europe, Africa, UK and Ireland; Sándor Saly, Airline Development Manager, Budapest Airport; and (front row) Wilco Sweijen, Director Aviation Marketing – Asia, Middle East and Latin America. easyJet will connect the two cities from 6 February 2017 with a thrice-weekly service. 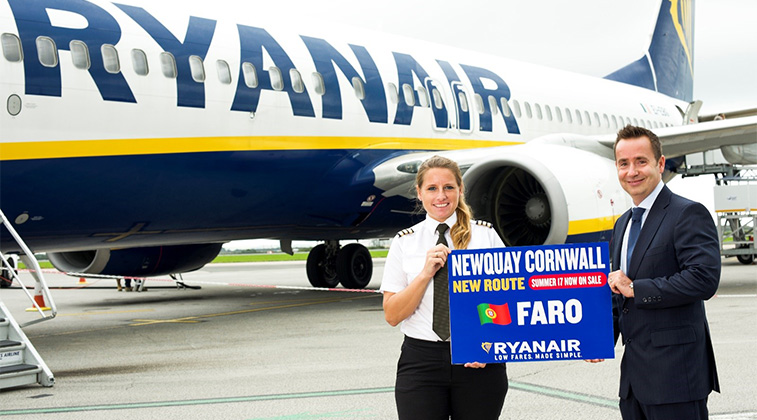 On 21 September Ryanair announced its third route from Newquay, a connection to Faro. Seen welcoming the announcement are Ryanair’s First Officer, Carine Bekenkamp, along with Newquay Airport’s MD, Al Titterington. As well as this new route, launching on 28 March, the airline has confirmed that flights to Alicante and Frankfurt Hahn will also continue in S17. Titterington said of the news: “We’re delighted that Ryanair is growing its operation from Cornwall with the introduction of a third route to Faro in 2017, illustrating the strong demand for sun destinations from Cornwall and the South West. Our positive relationship with Ryanair is blossoming and its commitment to grow services from the region after only one year of operation is particularly pleasing. This new connection direct to the Algarve should prove very popular with families, golfers and surfers and offers a great new option for those wishing to start their holiday from their local airport.” 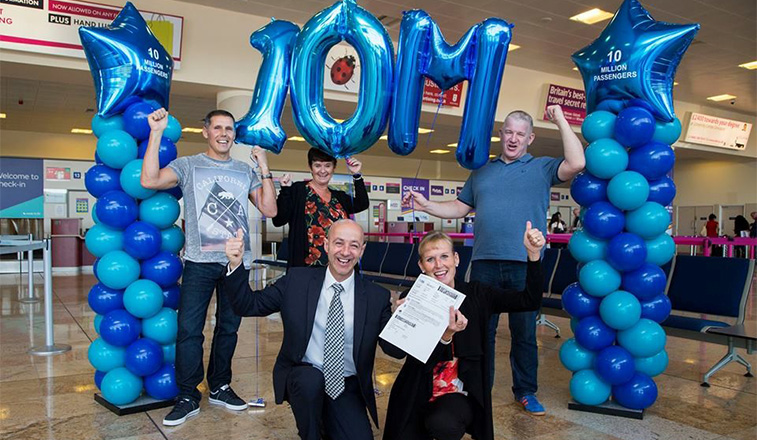 On 3 October Doncaster Sheffield Airport celebrated passing the 10 million passenger milestone since its opening. Sue Ellis, from Rawmarsh in Rotherham was announced officially as the 10 millionth passenger to travel from Doncaster Sheffield Airport. Ellis, along with her husband Neil Ellis and friends Jill Small and Andrew Thomson, were heading out to Malaga with Flybe, an airline which opened a two aircraft base at the Yorkshire airport in March this year. Steve Gill, MD of Doncaster Sheffield Airport, who greeted Ellis and her friends at check-in, said of the occasion: “We are really delighted to welcome Sue, Neil and their friends to the airport today as we reach this major milestone. We’re so proud that 10 million passengers have chosen to fly from here, supporting their local airport and we are looking forward to welcoming even more now that the link road from the motorway has opened up our catchment area. For example, it has made the journey from Sheffield to the airport just 30 minutes.” 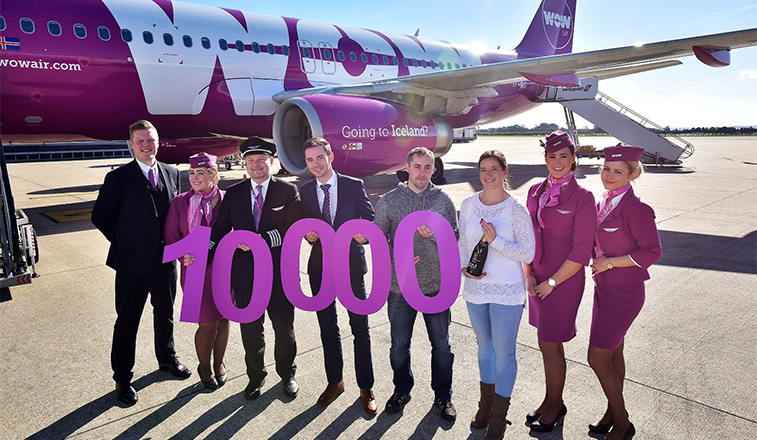 On 3 October WOW air, along with Bristol Airport, celebrated the milestone of carrying 10,000 passengers on its route to the UK city since it launched in May. Peter Downes, Head of Aviation, Bristol Airport commented on the news by saying: “This is an exciting day for Bristol Airport, celebrating 10,000 passengers departing from the region to Iceland with onward connections to North America. After a very successful first summer, WOW air continue to go from strength to strength at Bristol.” Svana Friðriksdóttir, Head of Communications at WOW air, also commented: “Though we’ve only been operating from Bristol since May, we’ve been thrilled to fly so many passengers to our home in Iceland and, for many, on to our destinations in the US and Canada. The lucky 10,000th passenger was Nicola Saunders from Taunton. In celebration, she and her husband Les were surprised with a bottle of champagne from Downes which they could enjoy on arrival at their destination and also given a free trip away for two with WOW air to any of the airline’s North American destinations via its Icelandic hub. 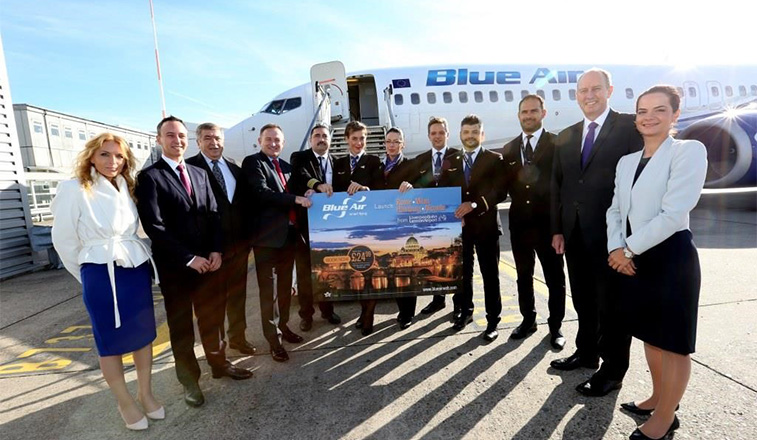 On 2 October Blue Air announced its eighth and first UK base, Liverpool. The Romanian LCC will station one 737-800 at the airport and open new routes to Alicante, Hamburg, Milan/Bergamo and Rome Fiumicino. The airline already serves Liverpool from Bacău, Bucharest and Cluj-Napoca. Announcing the airline’s latest development at Liverpool, Blue Air’s CEO, Gheorghe Racaru commented, “Today is a historic moment for both Blue Air and the Liverpool City Region as we announce our eighth base at the airport, adding four routes. In fact, we are going to put three brand new destinations on Liverpool’s route map, by flying directly to the currently unserved cities of Rome, Milan and Hamburg, which are likely to be popular with customers travelling for both business and leisure. Additionally, we will offer the region’s passengers an increased choice with our Alicante service. The UK is a strategic market for Blue Air and we strongly believe that basing a 737-800 at Liverpool will allow us to strengthen our position as one of Europe’s fastest growing airlines.” 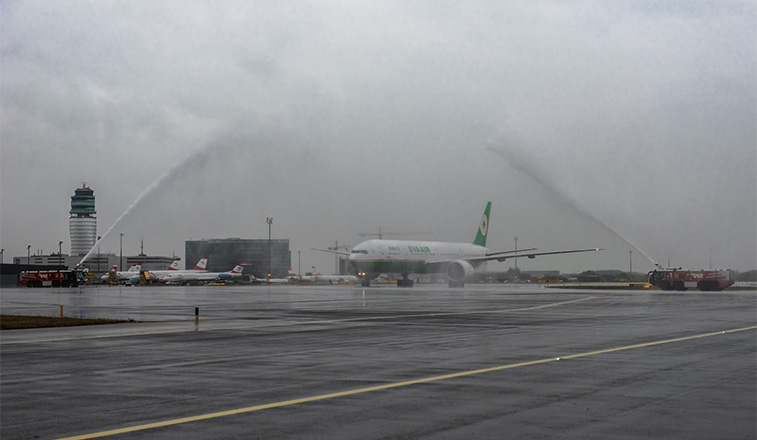 On 4 October EVA Air upgraded its flights to Vienna Airport from an A330-200 to a 777-300. The airline currently links the Austrian capital to Taipei Taoyuan via Bangkok Suvarnabhumi. Vienna welcomed the upgrade in capacity by greeting the first 777-300 arrival with a water arch salute. 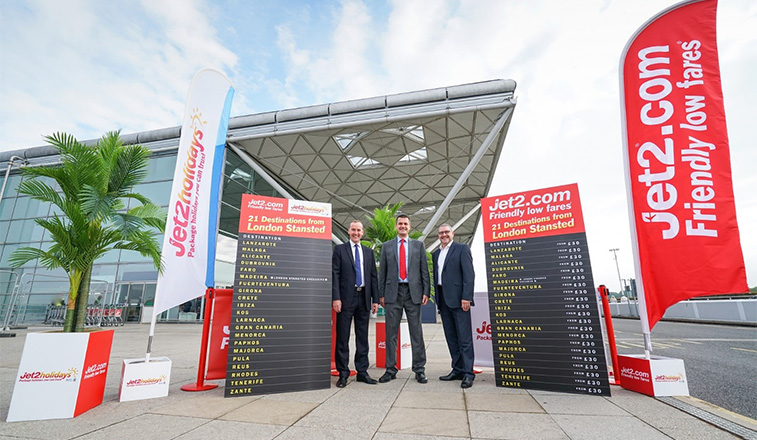 On 21 September Jet2.com announced that it will base six 737-800s at London Stansted from March next year, as well as opening up 21 new routes, namely: Alicante, Dubrovnik, Faro, Fuerteventura, Funchal, Girona, Gran Canaria, Heraklion, Ibiza, Kos, Lanzarote, Larnaca, Malaga, Menorca, Paphos, Palma de Mallorca, Pula, Reus, Rhodes, Tenerife South and Zakinthos. Seen announcing the details of Jet2.com’s ninth base at Stansted are: Andrew Cowan, CEO, London Stansted Airport; Steve Heapy, CEO of Jet2.com and Jet2holidays; and Alan Cross, Head of Trade at Jet2holidays. This will be one of two new bases for the airline next year. Along with Stansted, the airline will base four 737-800s at Birmingham and serve 15 destinations. On 16 September Vueling commenced flights between Naples and Paris CDG, with the former airport celebrating the new service with a Parisian-styled tea party festivity at the inaugural departure which included a macaron launch cake. The 1,287-kilometre sector will be flown by the LCC four times weekly on its A320s. Direct competition on the airport pair comes from Air France (twice-daily) and easyJet (daily).