Cork-Rome is “Skyscanner Unserved Route of the Week” with 75,000+ searches; Ryanair or Aer Lingus’ next Roman holiday? 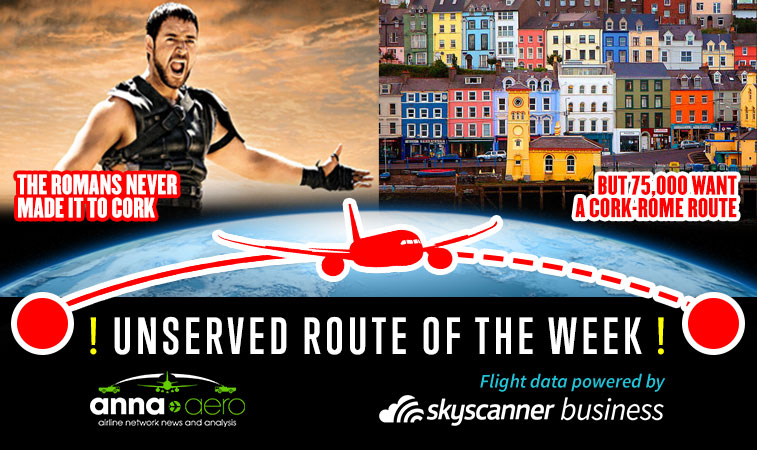 In the last 12 months 75,000 frustrated travellers searched Skyscanner for a Cork-Rome service. Skyscanner data shows most ended up flying via Heathrow or Amsterdam. Aer Lingus, an anna.aero candidate for the service, did operate the route from 2005 to 2012, generating an annual 48,000 passengers, so the route is clearly already warmed-up for a re-start or adoption by Ryanair, Vueling or Wizz Air.

With 75,000 searches in the last year, a potential new route from Cork to Rome has been identified as this week’s “Skyscanner for Business-anna.aero Unserved Route of Week” – a powerful new kind of analysis based on aspirational data captured from the Skyscanner.net flight comparison site used by +50 million unique visitors per month. “The number of Irish visiting Italy is significantly growing, people from Cork love the Eternal City,” says Mathias Richter, Aviation Marketing Specialist, Cork Airport. “The number of Italians visiting Ireland is also growing – Cork is the gateway to the South of Ireland.” 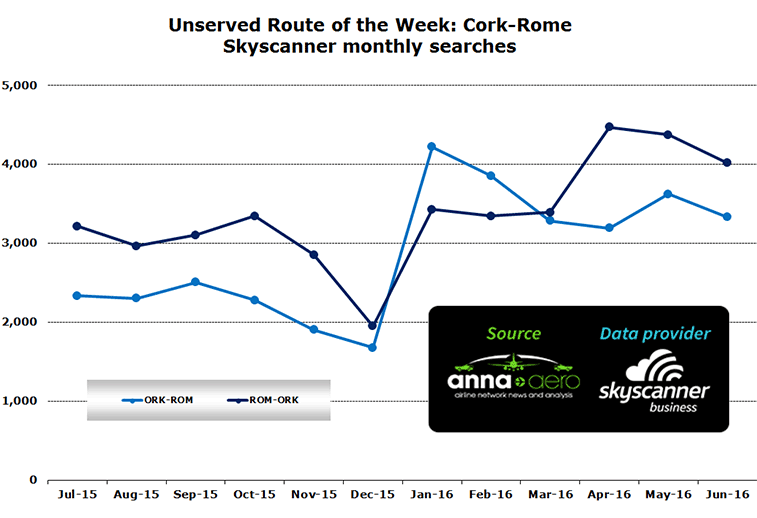 With the traffic on this route indicating a 54/46 split in favour of Rome, the potential carriers at the Italian end of the route were therefore considered first, starting with those operating at the city’s main airport of Fiumicino. As expected, the national carrier, Alitalia is currently the largest airline (39% share) in terms of weekly capacity, according to OAG schedules data for the week commencing 4 October. However, Alitalia does not currently operate to any destinations in Ireland, so it would seem unlikely that the SkyTeam carrier would consider a service to Cork before flying to Dublin, unless it was trying to avoid head-to-head competition with the incumbent carriers operating between the two capital cities. The last time that Alitalia operated from Fiumicino to Dublin was a twice-weekly service during S06, according to OAG schedules. In the same year, it also flew a daily service from Milan Malpensa.

Taking a look at Fiumicino’s second and third largest airlines based on weekly seats, both are LCCs. Ryanair is the #2 carrier at the airport (8.0% share), while Vueling is a close number #3 (7.5% share). Neither carrier serves the Irish market from Fiumicino, although Ryanair does offer a double-daily operation from Rome Ciampino to Dublin, where it is the biggest (90% share) of the two carrier’s using the airport. So perhaps the Irish ULCC may consider a Cork connection from either of the Rome airports to complement its existing Irish capacity. Ryanair is also the second largest carrier operating from Cork (35% share), which is another reason why it should be giving some serious consideration to the potential sector.

Just to conclude the Italian end of the proposed route, while Vueling does not offer any Irish flights from Fiumicino, which is its second largest base (behind Barcelona), it does however have some experience in the Irish market, with a five times weekly service between Barcelona and Dublin. But while the Spanish LCC could be considered as a potential operator between Rome and Cork, there may be other carriers with route development strategies better aligned to serving this market at the moment: Wizz Air (#2 carrier – 10% share) has a network of 10 destinations from Ciampino (Bucharest, Cluj-Napoca, Prague, Sofia, Timisoara, Craiova, Iasi, Katowice, Chisinau and Targu Mures). These routes, predominantly inbound markets from Eastern Europe, are operated with no aircraft based at Rome. So, like Vueling, a Cork service would require a change in the ULCC’s Rome strategy before a Cork sector could be considered, particularly as it currently operates no city pairs into Ireland.

Contemplating the Irish end of the route, Aer Lingus (64% share) is presently the leading player at Cork which is also the carrier’s third biggest operation (behind Dublin and London Heathrow). The airline also has existing services to Rome, albeit limited, from its Dublin base – 11 times weekly flights to Fiumicino ‒ so it has route knowledge which may help in its decision to expand its reach in Italy. Critically, Aer Lingus also operated the route for several years: “The route was served by Aer Lingus between 2005 and 2012, with up to 48,000 passengers per year,” confirms Richter. Perhaps with the benefit of this Skyscanner data, confirming there is still robust demand for the route, a return to this sector beckons for the Irish flag carrier.

When looking at the previous year of search data, the busiest month for potential traffic flows (for both directions on the route combined) is May 2016, with 8,000, over 4,000 higher than the lowest monthly figure, which was recorded in December 2015 (3,600). The seasonality profile of this search data is less extreme than the last Unserved Route of the Week (Bahrain to Jakarta), with the low-month traffic representing 45% of the highest month. According to OAG Traffic Analyser, because there is no direct service, the top three connecting options chosen by those passengers who did book travel between Cork and Rome in the past year indicates that the majority of connecting passengers use Heathrow (48%) Amsterdam (25%) and Wroclaw (13%). The most interesting of those connecting options is the last one, as Ryanair passengers have presumably been flying from Cork via Wroclaw to Ciampino as a means of getting between the two cities – who says you can’t connect with ULCCs!

An O&D that is not served by a non-stop flight will typically display a low purchase rate and low traffic. In this instance Skyscanner’s Travel Insight indicates a monthly average of 1.7% for the Cork to Rome route (see graph below). Therefore, if there was a Cork to Rome route, and if bookings performed in line with the “Skyscanner market average” for direct services at both airports (5.7%), the airline operating this route could immediately expect an improved purchase rate of a massive 236%, without any increased marketing spend. However, with nearly 75,000 annual searches, the potential city pair should already be very sustainable at around a twice- or thrice-weekly frequency. 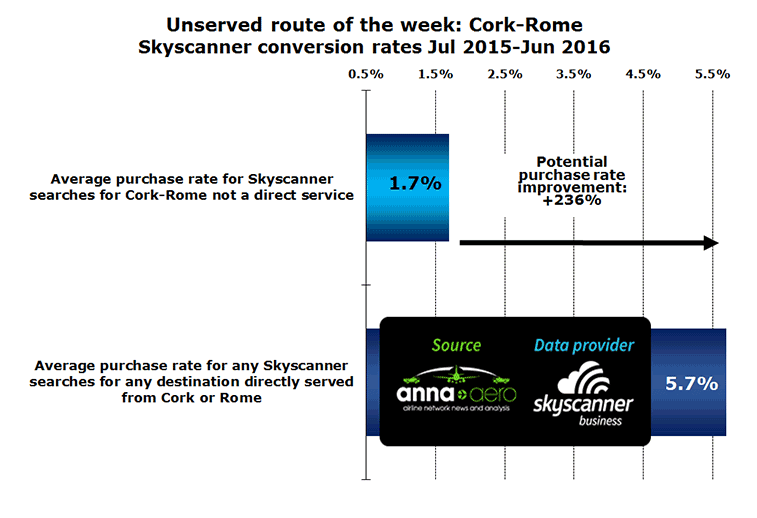