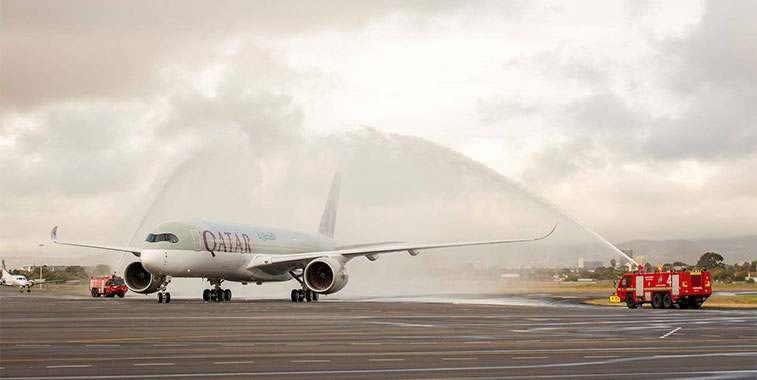 Qatar Airways started its fourth Australian route on 2 May – a daily service to Adelaide with its A350-900s. With the help of its second MEB3 airline and its first Chinese carrier later in the year, the Australian airport, the country’s fifth busiest, is on course to get close to eight million passengers in 2016.

Adelaide Airport is the fifth busiest in Australia, a position it has held since 1993, following a year in fourth spot during 1992 (it was also #4 in 1988, as well as 1985 and 1986). The airport serves the state capital of South Australia and offers a network of 28 non-stop destinations (up from 25 last year – having added Doha in Qatar, and Sunshine Coast and Melbourne Avalon in Australia) across eight countries, which are operated by 13 serving airlines (up from 11 a year ago), according to OAG schedules data for the week commencing 6 October. The two new tail fins added to Adelaide’s roll call of airlines over the last year are Alliance Airlines, which operates 15 times weekly to Olympic Dam in South Australia, and perhaps more significantly, the arrival of the airport’s second MEB3 carrier in May, Qatar Airways, which flies daily from its Doha hub. 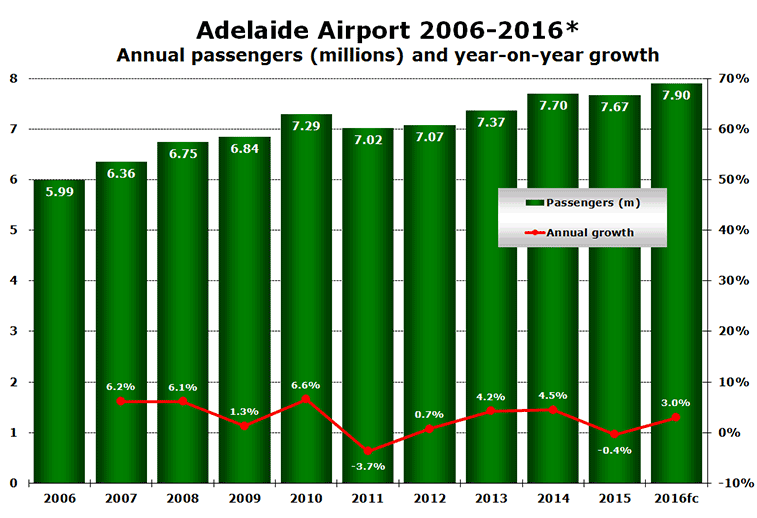 While you would not say that Adelaide’s passenger traffic performance has been stellar since 2006, it has plotted a path of solid throughput increases over the last 10 years, averaging 2.9% growth per annum, with just two years of declines, in 2011 and 2015. Traffic figures for 2016 also reveal this remarkable consistency, as January to July monthly statistics are indicating an average of 3% growth year-on-year. As a result, the airport should get close to eight million passengers by year-end, with anna.aero’s data elves forecasting an annual figure of around 7.9 million.

Entering Adelaide’s monthly passenger data for 2015 into anna.aero’s Seasonal Variation in Demand (SVID) calculator, the airport performs very well, generating a score of 0.39 ‒ an ‘Excellent’ rating ‒ making it the #1 airport of close to 50 reviewed so far during 2016. While the Australian airport has posted a better result than the #1 in 2014, Burbank in California, which scored 0.40, it is slightly behind last year’s top ranked airport Singapore (0.33), and well below the performance of Muscat in 2013, which produced a staggering SVID result of 0.09 – still the lowest ever recorded by anna.aero’s data elves.

When comparing it to its Australian peers, Adelaide has clear lead ‒ Melbourne (0.43), Sydney (0.44) and Brisbane (0.48) Perth (0.52) and Gold Coast (1.26) ‒ in terms of its SVID result. However, looking at the airport’s SVID result for 2014, Adelaide’s performance has weakened in the last 12 months, with its score increasing from the less peaky traffic profile of 0.36 attained in the previous year.

Unsurprisingly, Adelaide’s weekly one-way seat capacity is dominated by the big four Australian carriers – namely Qantas (36% share), Virgin Australia Airlines (24%), Jetstar Airways (18%) and Tigerair Australia (7%). All four have grown their respective capacity at the South Australian capital city airport in the last 12 months, with the smallest – Tigerair Australia – increasing its weekly seats the most (by 18%), followed by Jetstar (7%). When looking at the combined number of seats, the four airlines have added 4.2% more capacity at Adelaide this October when compared to the same week in 2015. However, despite this increase, their share of total capacity has dropped slightly from 87% to 85%. 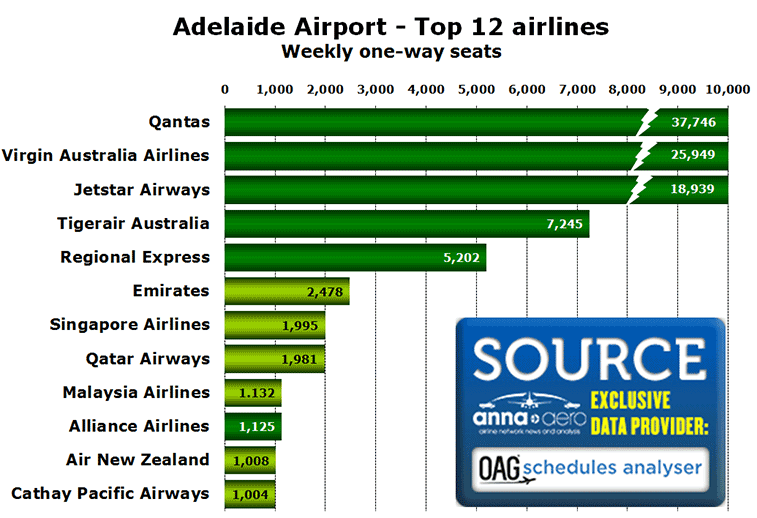 The total weekly capacity offered by the airport’s 13 serving carriers has risen by 6.7% since last October. The only other airline serving Adelaide at this time, which is not on the above graph, is Australian regional carrier Sharp Airlines, which flies to Port Augusta in South Australia. Five of Adelaide’s existing carriers, all international (which are highlighted in light green), have been static in terms of their capacity year-on-year ‒ Emirates, Singapore Airlines, Malaysia Airlines, Air New Zealand and Cathay Pacific Airways have all maintained the status quo.

In the last 12 months, Qatar has been added as a new country market at Adelaide, as Qatar Airways began daily A350-900 flights from Doha on 2 May, increasing the airport’s portfolio to eight nations, including the dominant home market (highlighted in light green), which has 89% of all weekly seats (down from 90% in October 2015). In fact the domestic market has been the star performer over the previous year, growing by 5.2%. Indonesia is the only other country market which has grown over the same period, posting a 3.1% increase. All other destinations have remained flat since last October. 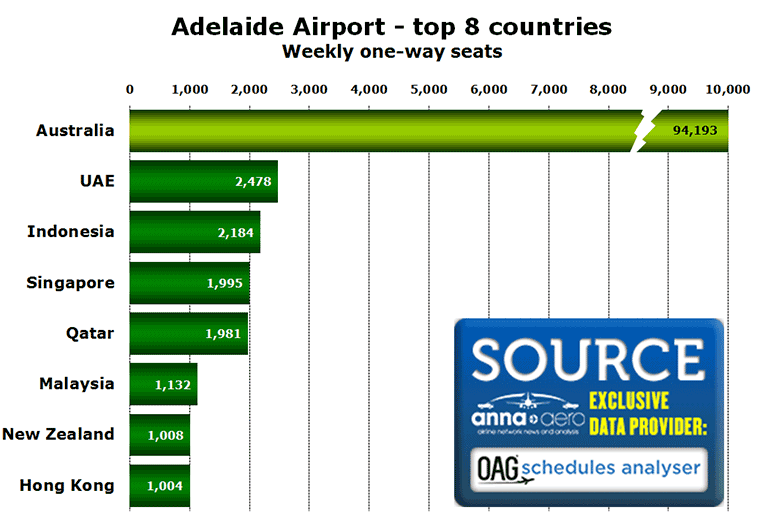 Next up – China connection

The number of country markets will rise to nine on 12 December, as China Southern Airlines is planning to commence a thrice-weekly operation from its Guangzhou hub, becoming Adelaide’s only Chinese connection. The 7,005-kilometre sector will be flown by the SkyTeam carrier’s 216-seat A330-200s. According to anna.aero’s New Route Database, there are currently no further new routes planned into Adelaide for W16/17 or S17. 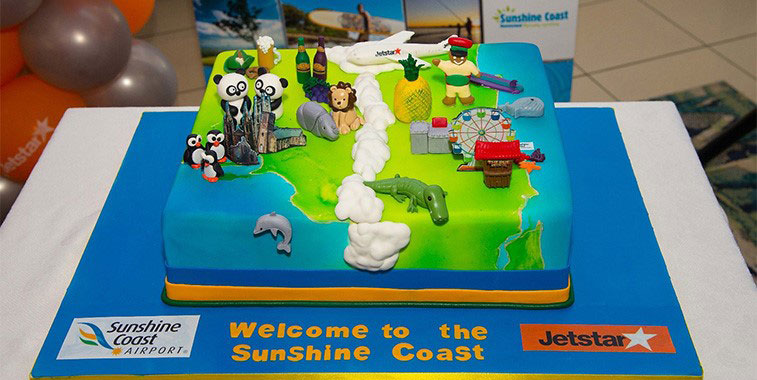 Jetstar Airways commenced a new route between Adelaide and Sunshine Coast on 30 September. The 1,667-kilometre sector is the LCC’s 10th route from the South Australia airport. The airline is the third largest at Adelaide, growing its capacity 7% year-on-year.