American Airlines has carried 122 million passengers from Miami since 2005; 2016 Q1 traffic up 5.8%; Cuba services come at a price 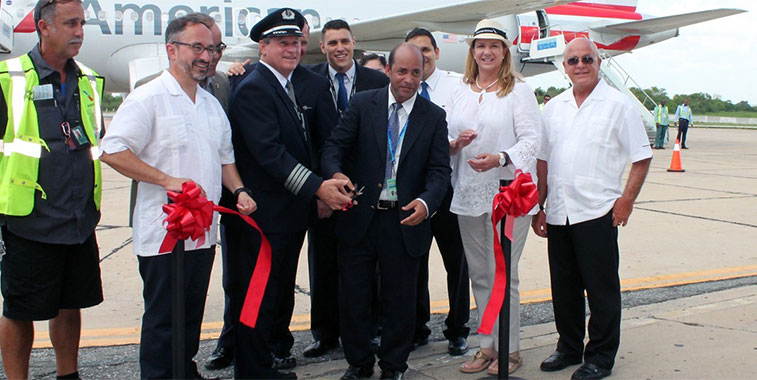 American Airlines commenced flights to Cienfuegos on 7 September, one of five new routes for the oneworld member from Miami to Cuba. A sixth to Havana is scheduled to launch in November. Despite welcoming all of these new international services, traffic in the market for Q1 2016 dropped by -4.0%.

American Airlines is the largest carrier at Miami, with it occupying 68% of departing seats this October. The second largest airline at the Floridian airport is Delta Air Lines, with it having a 5.6% share. In relation to American, Miami is the airline’s fourth largest operation, with it commanding 6.5% of the carrier’s 20.6 million monthly departing seats. Ahead of Miami is Dallas/Fort Worth (13% of monthly departing seats), Charlotte Douglas (9.8%) and Chicago O’Hare (6.9%). The oneworld member’s fourth largest airport sits ahead of Philadelphia (5.3%) and Phoenix (4.7%).

122 million passengers between January 05 and December 15

From January 2005 to December last year, American carried just over 122 million passengers from Miami. Of those passengers, just under 56% flew on domestic services, with the remaining 44% on international flights. During that time, domestic traffic has averaged a month-on-month increase of 3.5%, while international passengers grew by an average of 3.6%. 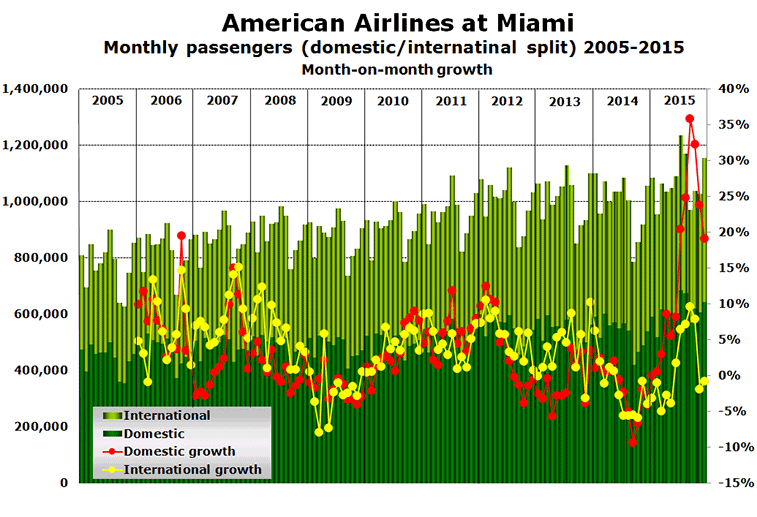 Below is a breakdown of how domestic and international traffic from Miami has grown during the past 10 years.

For the first quarter of 2016, traffic from Miami for American has grown by 5.8%, with the oneworld member carrying 3.3 million passengers between January and March. In that time the airline’s domestic traffic has grown by 13.6%, however international traffic is down -4.0%.

It comes of no surprise to see that the number one route for American from Miami is to its number one hub, Dallas/Fort Worth. The route itself occupies 4.8% of the airline’s departing seats from the Floridian airport, so it is not a dominating route, with second placed New York LaGuardia occupying 4.0% of departing seats. Of the airline’s top 12 routes from Miami, four of them (highlighted in light green) are reporting drops in capacity when compared to the same month in 2015. In total American serves 123 destinations from Miami this October, a net gain of one when compared to October 2015 (explained in more detail below). 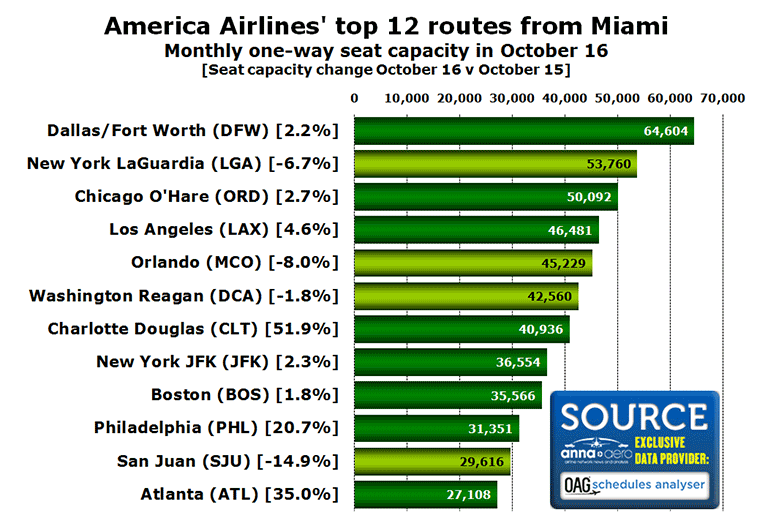 Cuba routes come at a price…

One of the major changes to American’s Miami route map during the past year is the introduction of scheduled flights to Cuba. American has so far commenced five routes to Cuba from Miami, namely Holguin (42nd largest route for American from Miami), Santa Clara (49th), Varadero (54th), Camaguey (89th) and Cienfuegos (92nd). However the introduction of Cuba into American’s route network from Miami has also resulted in a fair share of route casualties. Routes to Curitiba, Sao Paulo Viracopos and Recife have been cut when referring to OAG schedules, while Pointe-a-Pitre has seen its season of operation reduced. On top of these cuts, the average change in capacity across American’s 118 existing routes which operated in October last year is -3.9%. In total, of the 118 existing routes, 62 have seen capacity cuts, with 40 of those seeing a capacity cull greater than 10%.

As already stated one of the key route launches coming up from Miami is the launch of flights to Havana, pencilled in for a launch date of 30 November. Along with Havana, other routes scheduled to commence from Miami before the end of 2016 include San Salvador in the Bahamas (8 October), Merida (4 November) and Westchester County (15 December). 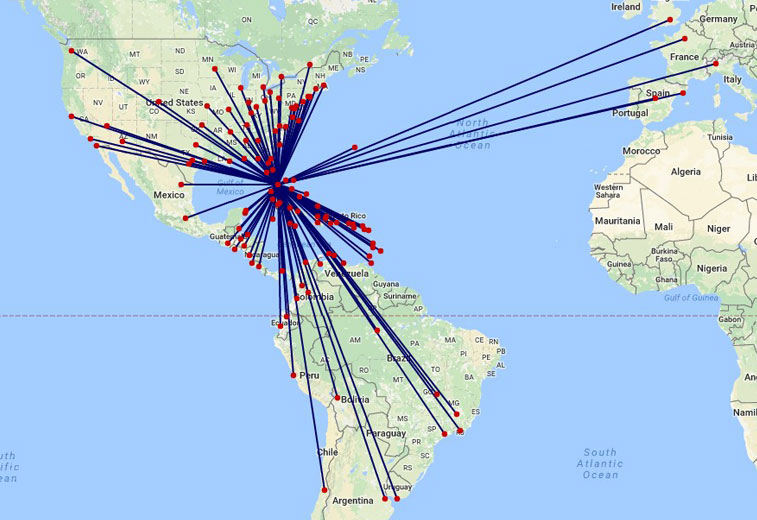 American Airlines currently operates 123 routes from Miami in October, a net gain of one when compared to the same month last year. During that time routes to Holguin, Santa Clara, Varadero, Camaguey and Cienfuegos (all in Cuba) have been gained, while routes to Curitiba, Sao Paulo Viracopos, Recife and Pointe-a-Pitre have been dropped.