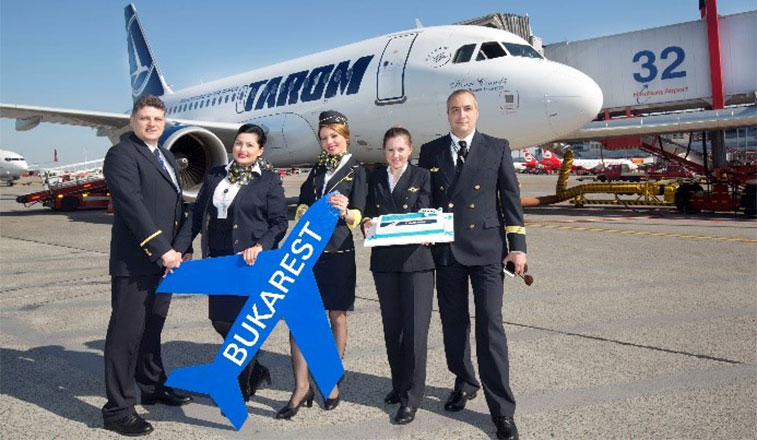 In S16 Germany is TAROM’s biggest country market accounting for almost 14% of international seat capacity at the airline. On 9 May 2016 Hamburg was added to TAROM’s network when the SkyTeam carrier began four times weekly flights from Bucharest.

The national flag carrier of Romania, TAROM, recently celebrated 62 years of flying. The airline, which became a member of the SkyTeam alliance in June 2010, has a modest fleet of 23 aircraft, comprising two classic A310s (one of which is in storage), eight 737s (a mix of four -300s and four -700s), four A318s, two ATR 72s and seven ATR 42s. The average age of the fleet is estimated to be around 16 years old. Since the beginning of the decade, the airline has transported between 2.1 and 2.4 million passengers each year. Average annual load factors for the last decade have been between 60% and 70% apart from in 2009, when they fell to just 56%. Last year saw load factors reach a record high of 70%. 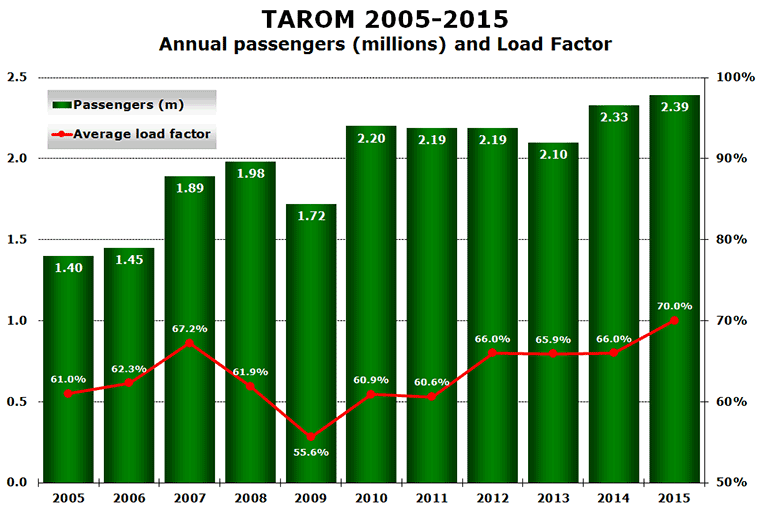 Based on analysis of OAG Schedules Analyser, the airline’s seasonality is relatively modest with capacity in August 2016 only 21% higher than in January. Scheduled capacity in the first 10 months of this year is only 0.2% up on the same period in 2015. This is despite the fact that demand for air travel in Romania is currently growing by more than 10% per annum.

TAROM’s lack of growth is in stark contrast to the growth in capacity offered by Wizz Air and Blue Air, and more recently, Ryanair. While TAROM’s share of seat capacity from all Romanian airports was stable at between 27% and 29% for the period 2009 to 2014, the last two years have seen a dramatic reduction, so that the flag carrier’s share of capacity in 2016 has fallen to just below 20%. 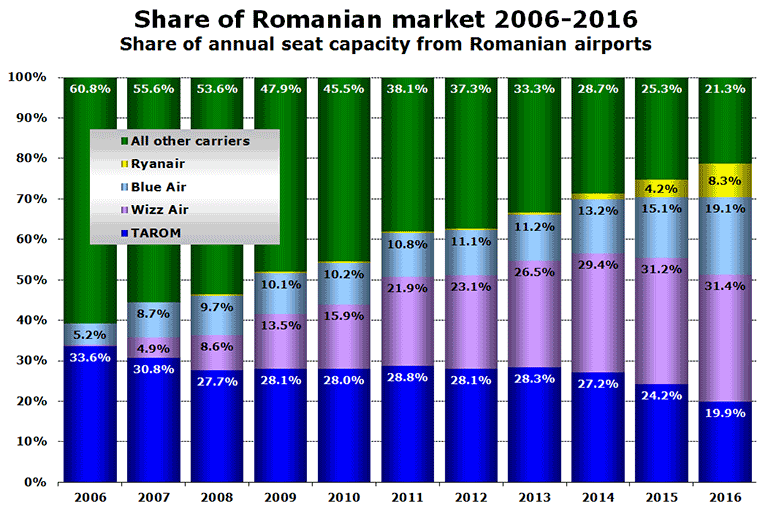 Wizz Air overtook TAROM to be the biggest airline in Romania in 2014, but locally-based LCC Blue Air now looks set to also overtake TAROM in 2017. The last two years has seen Ryanair also ramp up its presence in Romania from less than 1% of seat capacity in 2013 to over 8% in 2016. None of this is good news for the state-owned national airline. In 2016, of the 21.3% of capacity not accounted for by these four leading airlines, the next biggest carrier is Lufthansa (with 6.1%) followed by Austrian Airlines (2.7%) and Turkish Airlines (2.5%).

Germany and Spain battle to be #1 country market this summer

TAROM currently operates seven domestic routes from Bucharest; to Cluj-Napoca, Iasi, Oradea, Sibiu, Suceava, Satu Mare and Timisoara. Analysis of OAG schedule data for 2016 suggests that TAROM is still the dominant carrier on the domestic market with around 82% of flights and 64% of seats. However, the corresponding figures in 2014 were 97% and 95%, so even here TAROM is coming under pressure.

A total of 22 countries are served by TAROM from Romania, with the longest sector being a weekly service to Dubai. The leading country markets are Germany and Spain, which are both served with five routes. Munich is the only destination served by TAROM from three airports; Bucharest, Iasi and Sibiu. 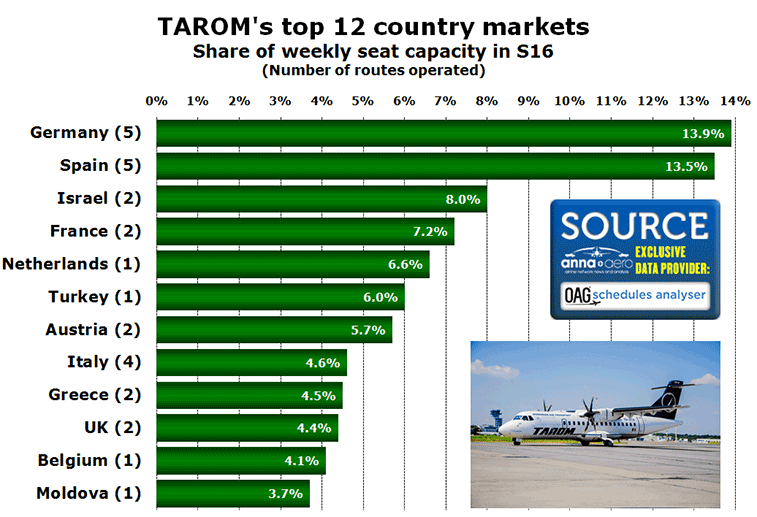 During the last 12 months, TAROM has launched a number of new routes. From Iasi it has added Madrid and Munich flights, bringing its network to a total of eight routes. At the airline’s main base at Bucharest Otopeni it now serves 36 destinations. New this summer are international routes to Alicante and Hamburg, as well as domestic links to Oradea and Suceava. It also started service from Iasi to Istanbul Atatürk on 9 December 2015, but this route was suspended in May 2016. Iasi is TAROM’s second biggest airport and the airline now serves eight routes from the airport including Munich, which was launched last October. Munich is the only foreign airport served by TAROM from three separate Romanian airports; Bucharest, Iasi and Sibiu.