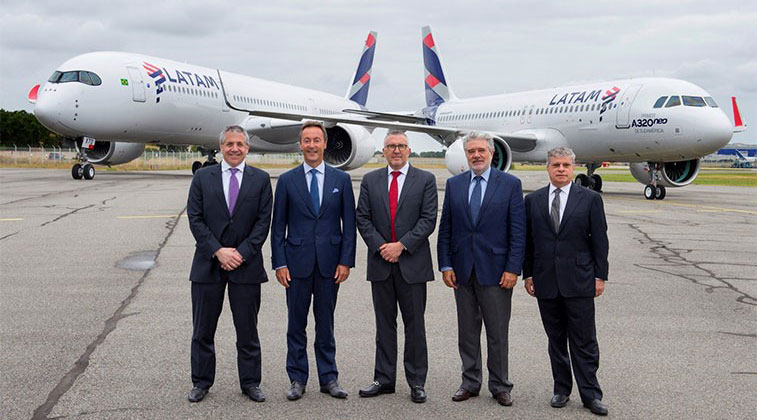 Since the formation of the LATAM Group, it has not been plain sailing. The company has racked up repeated revenue decreases year-on-year since its formation in 2012. In 2013 its operating profit was $13.3 million (US), an increase of 0.3% on 2012’s total. However in 2014 it dropped 6% to $12.5 million and by year-end 2015 it was down by nearly 19% to $10.1 million. It’s not just profits that have been falling at the carrier since the coming together of LAN Airlines and TAM Airlines, but also traffic carried.

Taking a look at Q1 and Q2 traffic data for 2016, the total number of passengers carried by the LATAM Group has fallen by 1.1%, with the two airlines within the group carrying 32.6 million passengers between January and June this year. Taking the quarterly decreases in traffic from the data that anna.aero has been able to find from the group’s website, it has seen its traffic decrease at a quarter-on-quarter rate of 0.7%, with the period from April 2014 to June 2016 seeing an average decrease of 3.3%. The worst time for the LATAM Group during its recent history was between July and September 2015, when traffic dropped by just over 10% when compared to the same three-month period of 2014. 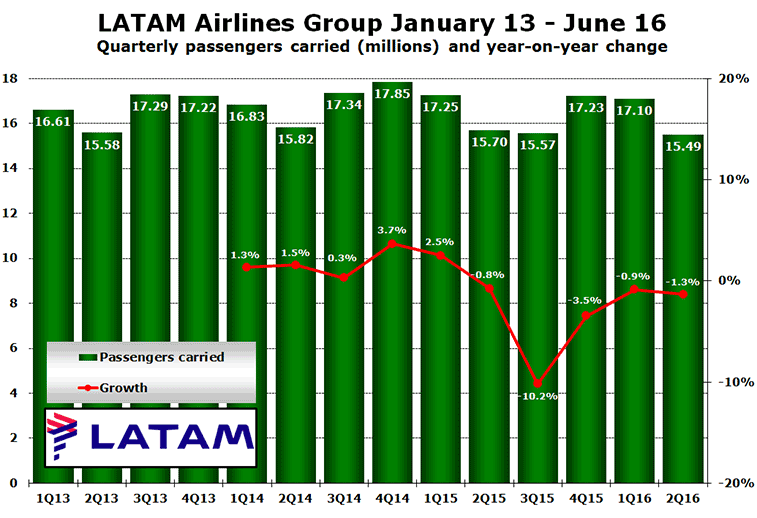 What can be seen from the group’s quarterly figures is the seasonality of its traffic flow, with its peak months being from the beginning of Q4 (October) to the end of Q1 the following year (March). This is of course in relation to this period being the summer months in the southern hemisphere.

Capacity cuts across both carriers

LATAM Airlines and LATAM Airlines Brasil have both seen seat capacity cuts during the past 12 months, with the former seeing a shrinkage of 0.5% and the latter 9.5%. In total, taking both airlines combined capacity together, LATAM Group’s overall capacity is down by 5.5%. 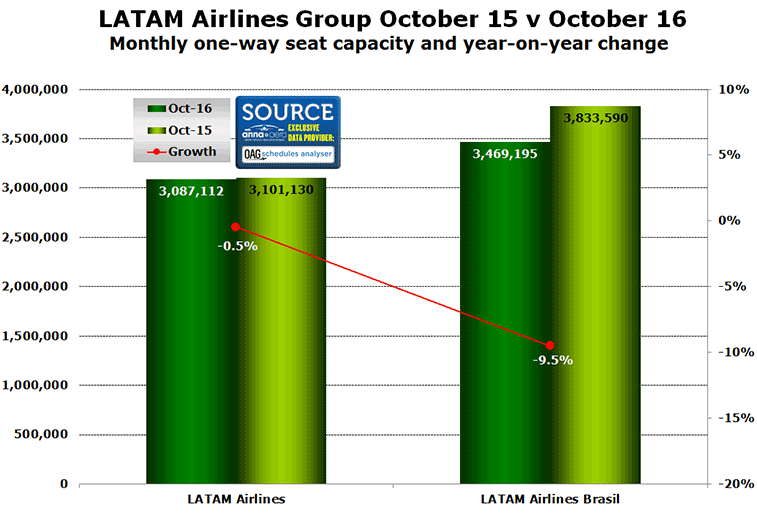 In relation to the capacity cut in Brazil, the main market for LATAM Airlines Brasil, the group stated that it had made this business decision due to the nation’s weak economy. It cut capacity in Brazil’s domestic market by 2.5% last year and expects to reduce it by another 8% to 10% this year according to Enrique Cueto, LATAM Airlines Group CEO. Brazil’s economy is forecast to shrink by 3.9% this year, after contracting by 3.8% in 2015, and the Brazilian Real lost about 30% of its value against the US Dollar last year. That combination hit demand for travel and pushed up local currency costs explained Cueto. The reason for the capacity decrease from LATAM Airlines is partially due to the carrier currently going through a fleet renewal, along with its Brazilian counterpart, with fleet reductions and welcoming newer aircraft having a knock-on effect on its capacity. 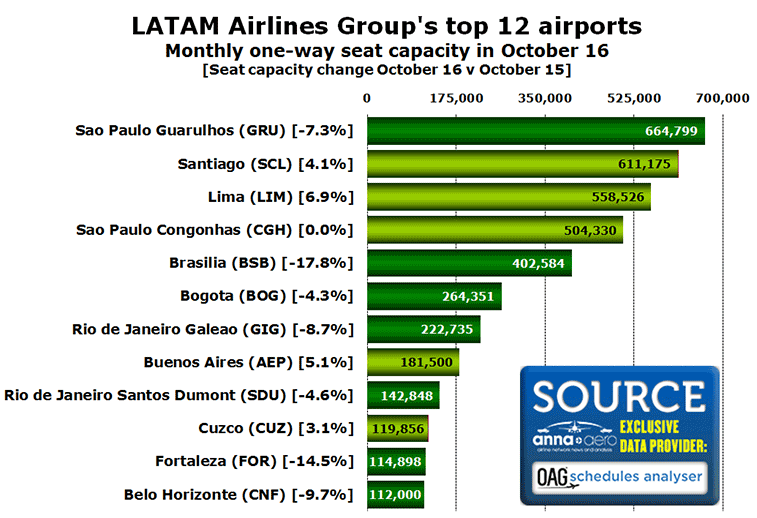 Highlighted in light green above are airports within the LATAM Group’s top 12 that have not seen cuts during the past year. What is evident from those that have seen cuts (dark green) is that all airports bar one, Bogota in Colombia, are in Brazil.

Of the 134 airports which are served by the LATAM Group, 68 have seen cuts in capacity, with a further 12 having not seen any change over the past year. According to OAG schedules, three airports have been added to the joint LATAM Airlines and LATAM Airlines Brasil route map during the past year. They are Jaen, Washington Dulles and Johannesburg – the group’s only destination in Africa. Along with these gains, the following airports have been dropped by the oneworld carriers; Mendoza (temporarily due to the airport being shut for runway works until December), Juazeiro do Norte, Toronto Pearson, Sao Jose Dos Campos, Ciudad del Este, Caracas, Villavicencio, Neiva, Rosario and Ibague. 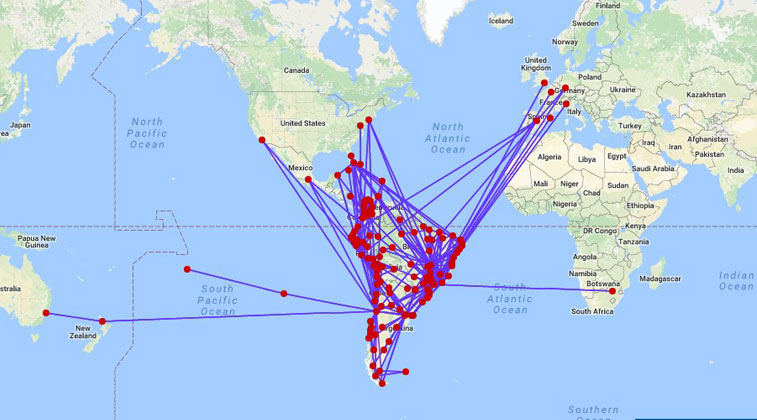 LATAM Airlines Group covers 134 airports across five continents, with the latest addition being Africa when LATAM Airlines Brasil commenced flights between Sao Paulo Guarulhos and Johannesburg. According to OAG schedules, the LATAM Group has seen a net loss of seven airports from its network during the past 12 months.