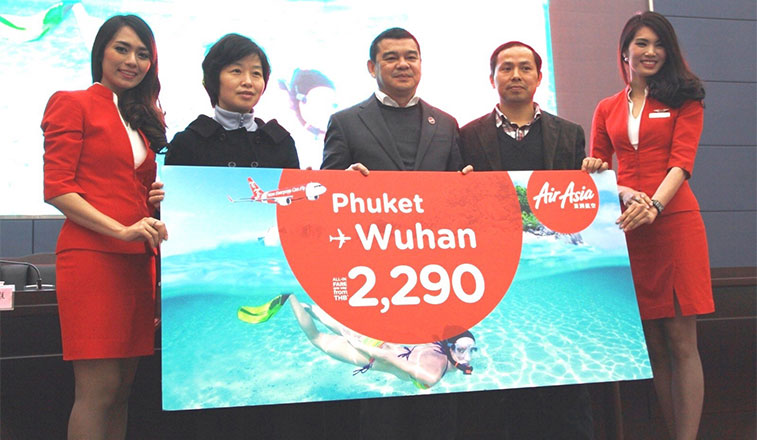 On 1 February Thai AirAsia began service between Phuket and Wuhan. The Thai LCC is now the biggest carrier in the total Thai market and has also moved from third to first in the Thailand-China market during the last 12 months. China is also by far the biggest international market from Thailand and also the fastest-growing among the top 15 country markets.

Thailand has a total of 38 airports but five of the top six airports (and six in total) are operated by Airports of Thailand (AOT). According to AOT their airports handle 86% of all passenger movements at Thai airports and 81% of all aircraft movements. These six airports handled almost 107 million passengers in the Financial Year 2015 (October 2014 to September 2015), more than twice as many as in the Financial Year 2009. The global recession in 2009 had a significant impact on airport traffic in Thailand, but since then air travel demand has grown rapidly. With data available only up to August for the current financial year, AOT’s six airports have already handled over 110 million passengers, suggesting that the final figure for the full financial year will be around 120 million. 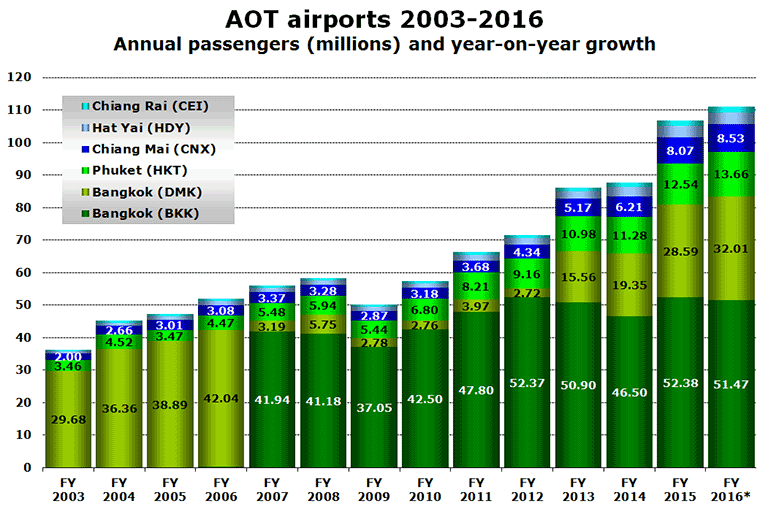 The busiest non-AOT airport is Krabi, which in 2015 handled 3.69 million passengers according to government statistics. Other non-AOT airports with more than two million passengers are Udon Thani (2.21 million in 2015) and Koh Samui (2.05 million in 2015). Koh Samui is one of three airports operated by Bangkok Airways, the others being Trat and Sukhothai.

An analysis of OAG schedules for S16 reveals that Thai AirAsia now offers more seat capacity from Thai airports than any other carrier. The LCC has increased its share of the Thai market from 17.6% in S15 to 18.8% in S16. It has grown its seat capacity by almost 18%, compared with the overall market growth of just under 11%. However, if the market shares of Thai Airways and its regional, lower-cost subsidiary THAI Smile are combined, then the national carrier’s share of the market is around 21.7%, still bigger than Thai AirAsia. The top six carriers are all locally based. 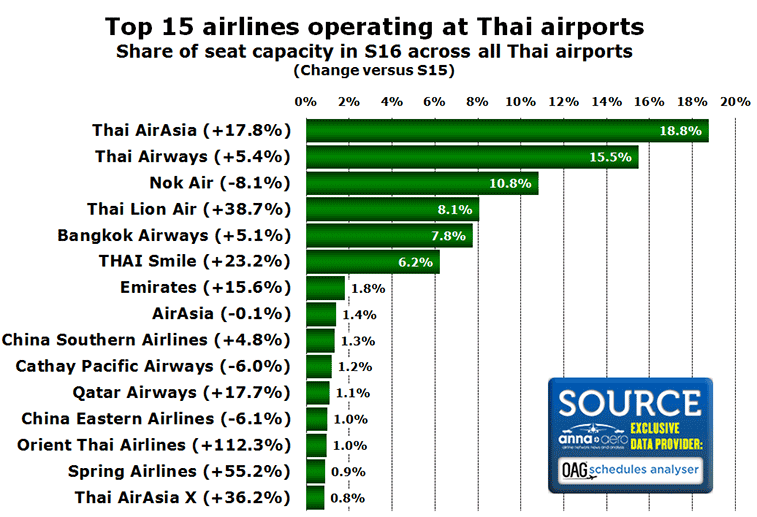 The biggest foreign carrier serving Thailand is Emirates. The Dubai carrier operates six daily flights to Bangkok and also serves Hong Kong and Sydney with daily flights. In addition Emirates operates 12 flights per week to Phuket, a market it has been serving since December 2012. Three Chinese carriers make the top 15 with LCC Spring Airlines having grown its presence in the Thai market by 50% in the last 12 months. 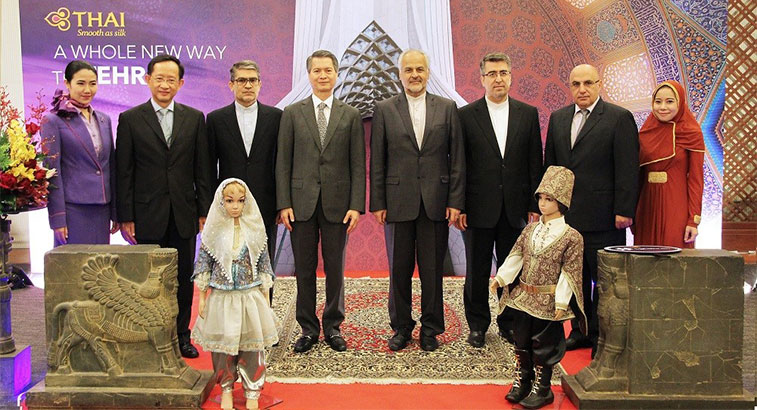 Thai Airways launched its first new route from Bangkok for almost four years when it began four times weekly flights to Tehran on 1 October. The Star Alliance carrier ranks second overall in the Thai market behind Thai AirAsia. However, if capacity from its regional, lower-cost subsidiary Thai Smile is included then the national carrier can still be considered the country’s leading airline.

A look at the leading international country markets reveals the dominance of the Chinese market. Services to and from China now account for 22.9% of seat capacity on international routes, up from 19.7% in S15. Capacity has grown by 33% between S15 and S16, more than twice the overall rate of growth across all international markets of just under 15%. The leading airline serving the Chinese market in S16 was Thai AirAsia. In S15 it ranked third but it has now overtaken both Thai Airways and China Southern Airlines thanks to a capacity growth of 35% in the last year. Other airlines adding significant capacity into the Thailand-China market are Spring Airlines, Orient Thai Airlines and NokScoot. The joint venture between Thailand’s Nok Air and Singapore’s Scoot, only began operations in May 2015 but has since launched services from Bangkok Don Mueang to Nanjing (June 2015), Qingdao (November 2015), Tianjin (January 2016), Shenyang (April 2016) and Chongqing (June 2016). 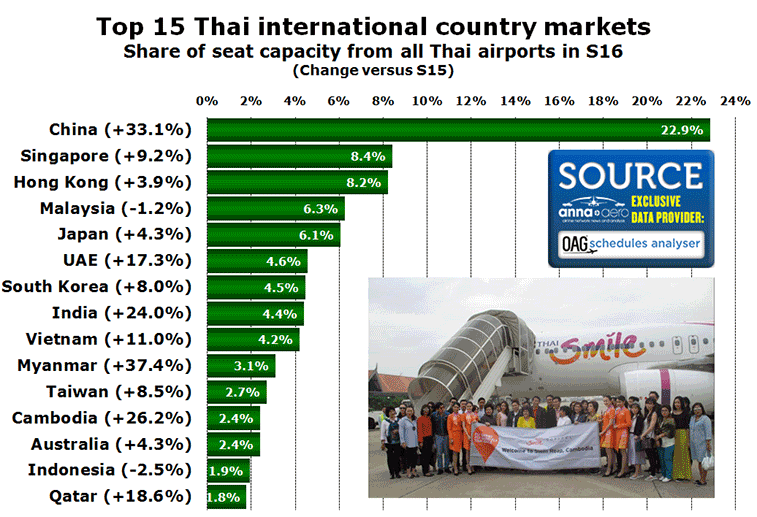 Other country markets growing by more than 20% this summer include Myanmar (+37%), Cambodia (+26%) and India (+24%). Conversely, Malaysia (-1.2%) and Indonesia (-2.5%) have seen small reductions in scheduled seat capacity compared with S15 according to OAG data. The biggest European markets from Thailand are Germany and the UK which rank 18th and 19th respectively.

There are currently no scheduled services to anywhere in the US. It is worth noting that the great circle distance from Bangkok to Seattle-Tacoma is 11,964 kilometres, to San Francisco is 12,729 kilometres and to Los Angeles is 13,272 kilometres. However, the recent launch of United Airlines service between San Francisco and Singapore (at 13,571 kilometres) indicates that US services from Bangkok are indeed feasible. 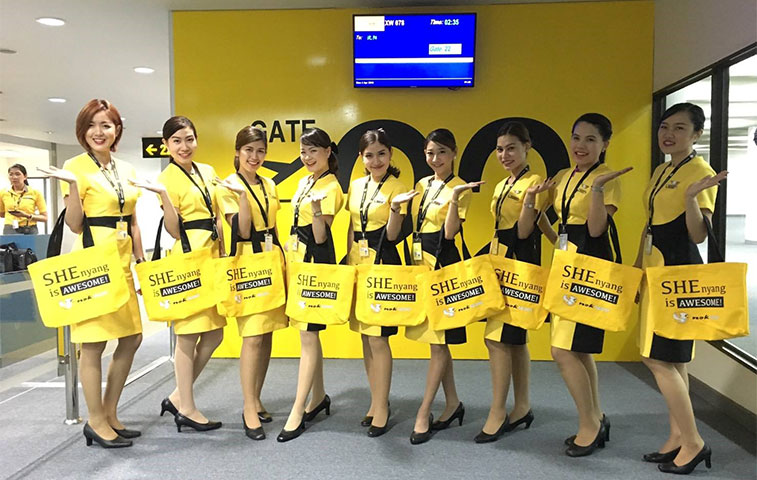 A significant new player in the booming Thailand-China market is NokScoot. The joint venture between Thailand’s Nok Air and Singapore’s Scoot, only began operations in May 2015 but has since launched service from Bangkok Don Mueang to Nanjing (June 2015), Qingdao (November 2015), Tianjin (January 2016), Shenyang (April 2016) and Chongqing (June 2016).