Jet2.com looks to London Stansted; 21 routes in S17 but will face competition on 20 of them; Ryanair likely to compete aggressively 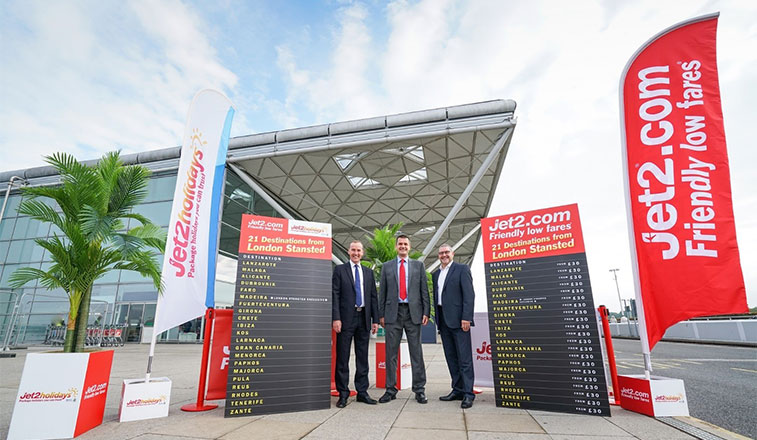 Jet2.com will launch flights from London Stansted to 21 destinations next summer using six based aircraft. Only one of the destinations (Funchal/Madeira) is not already served from Stansted and 15 were served by Ryanair this summer. Curiously the list of destinations on the giant promotional boards are in IATA 3-letter code order rather than alphabetical order.

Jet2.com is returning to the London market next summer with plans to base six aircraft at London Stansted and offer direct flights to 21 destinations during the peak summer period. Back in 2005, the LCC operated domestic routes from Manchester to London Gatwick, as well as serving Gatwick from Newcastle for the S07 and W07/08 seasons, but this is the carrier’s first attempt to operate internationally from London. Along with another new base at Birmingham, also launching next summer, Jet2.com will then have nine bases across the UK and will be operating over 250 routes. The addition of over 50 new routes next summer will be the carrier’s biggest ever growth in routes since the airline launched back in February 2003. Given the uncertainty around the UK economy post-Brexit and the current trend in the exchange rate with the Euro, it remains to be seen how this pans out for the airline, which is currently taking delivery of almost 30 new 737-800s over the next two years. 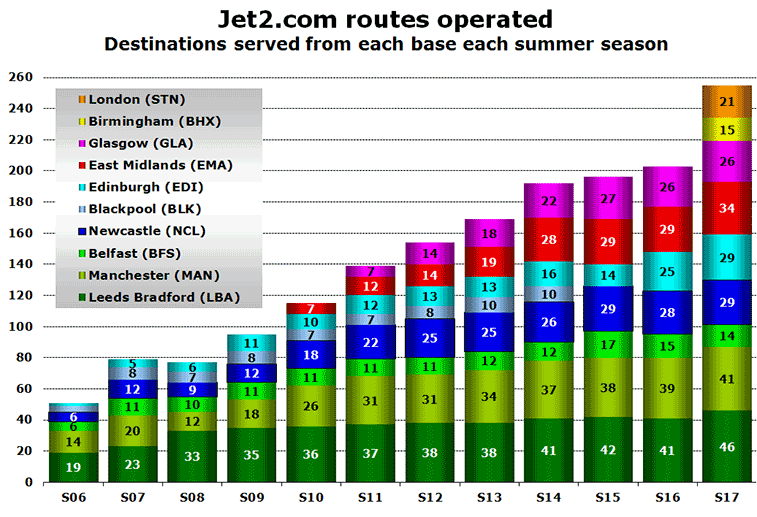 Ryanair and easyJet dominate at Stansted

London Stansted has long been synonymous with Ryanair. It is the Irish ULCC’s biggest base, offering non-stop flights this summer to almost 130 destinations. It is also an easyJet base, one that the airline inherited when it acquired Go in 2001/2002. During the last decade, Ryanair’s share of capacity at the airport has risen from just under 65% in 2006 and 2007 to over 80% in 2015 and 2016. Meanwhile easyJet’s share has fallen rapidly in recent years from 22% in 2011 to just 11% in 2015 and 2016. This summer it served just 20 destinations from Stansted, down from 28 in S10. 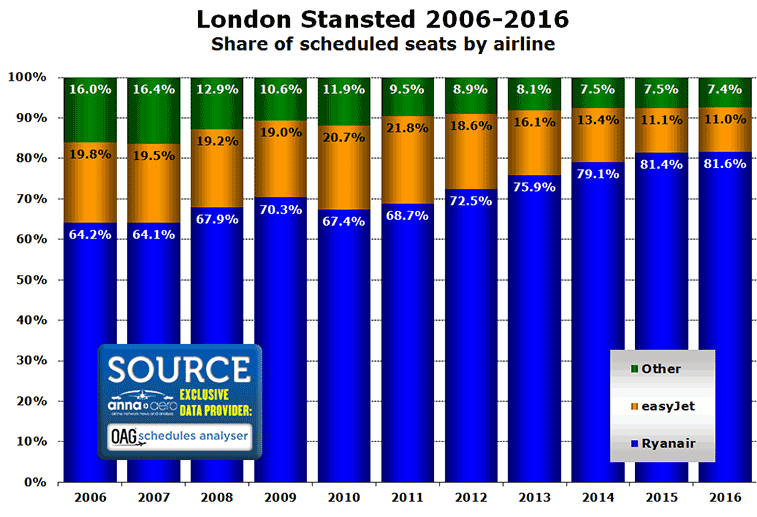 The market share of all other carriers combined has gradually fallen from 16% in 2006 to less than 8% in the last three years, a situation that the airport would presumably like to change. Thomas Cook Airlines and Thomson Airways operate mostly seasonal services at the airport. Norwegian does not serve the airport having established a major base at London Gatwick instead. Wizz Air has a major presence at London Luton, while Vueling serves Heathrow, Gatwick and Luton, but none in a big way. Lufthansa’s in-house LCC, Eurowings/Germanwings does serve Stansted, as does Turkey’s Pegasus Airlines.

Making the morning peak at Stansted even busier

Analysis of flight data for Monday 1 August 2016 gives a good indication of the pattern of movements at Stansted across the day. There were just a few flights before 06:00. The busiest hour for total movements was between 08:00 and 08:59 with 44 scheduled movements, 27 departures and 17 arrivals. The next busiest hours were from 07:00 to 07:59 and from 19:00 to 19:59 with both having a total of 37 movements on the airport’s single runway. 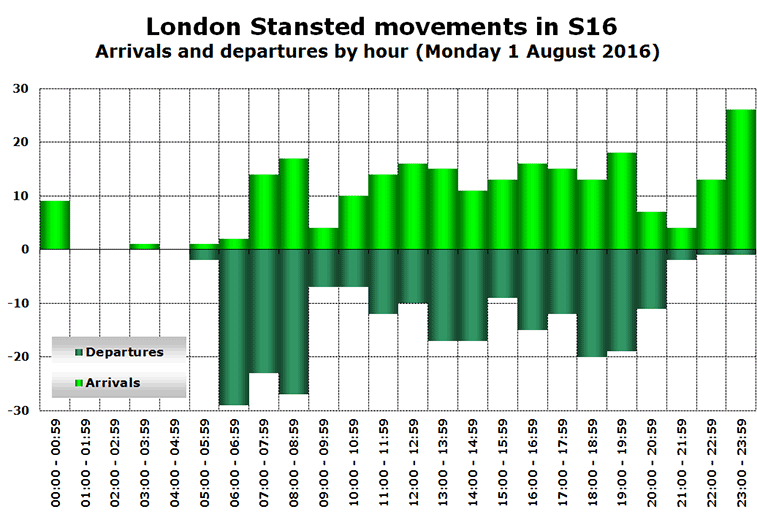 The addition of a further four movements in the airport’s busiest hour between 08:00 and 08:59 would take the number of movements to 48 if all of this year’s flights operate at the same time next summer. For comparison, according to OAG schedule data for London Gatwick, that airport scheduled more than 50 movements per hour in 10 separate hours on 1 August 2016, with the 11:00 to 11:59 hour having a total of 58 scheduled movements.

Ryanair competes with Jet2.com on 15 of 21 routes

Jet2.com is launching 21 routes spread across five different countries with a total of 83 weekly departures. Of these 54 (65%) are to destinations in Spain, 10 are in Greece, nine in Portugal and five each in Croatia and Cyprus. All but one of the 21 was already served from Stansted in S16, while Ibiza and Palma de Mallorca were served by as many as five carriers. Ryanair alone competes on 15 of Jet2.com’s 21 planned new routes.

Post-Brexit the UK Pound has seen its value fall across international money markets. A look at exchange rates for the Pound since 2012 against the Euro, the US Dollar and the Canadian Dollar shows the volatility of the currency markets. While the Pound has indeed fallen against the Euro it is only around 10% lower than it was for most of 2012, 2013 and the first half of 2014. Against the Canadian Dollar, the current exchange rate is comparable to that found in 2012 and the first half of 2013. The biggest depreciation has been against the US Dollar, suggesting that UK holidaymakers may be even more tempted to at least stay in Europe next summer rather than venture further afield. 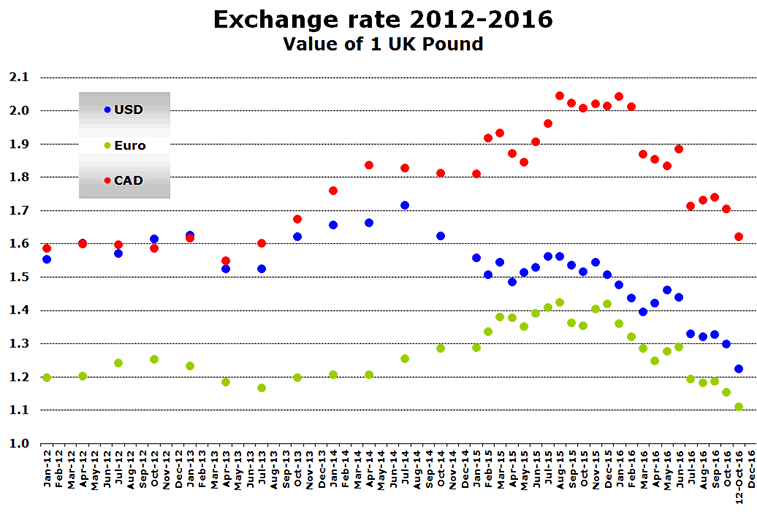