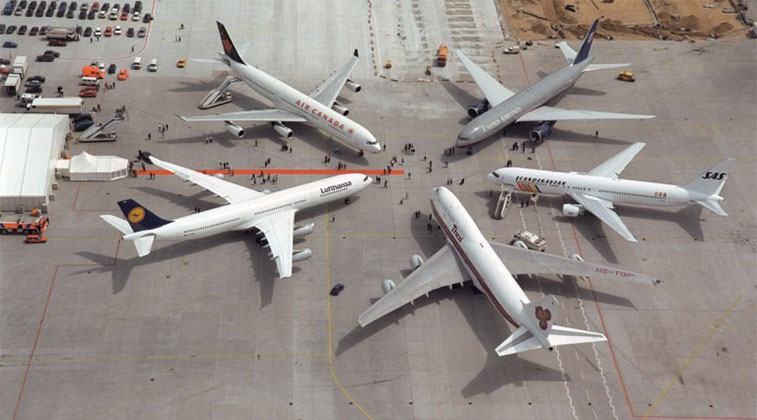 A blast from the past! Back in 1997, four of the five originating Star Alliance members had different liveries to what their aircraft don today, with Lufthansa staying true to its origins. The same cannot be said for its various subsidiaries. Today the alliance has 27 members with a 28th, in the form of Juneyao Airlines, planning to join the alliance in 2017.

The Star Alliance was founded on 14 May 1997. The first members of the alliance were Air Canada, Lufthansa, SAS, Thai Airways and United Airlines. An interesting fact for those of you interested is that these airlines shared the Star logo from the beginning, with the logo’s five points – making a star shape – representing the founding carriers. Last year, according to its website, the alliance welcomed 641 million passengers on a collective fleet of 4,657 aircraft across 27 member airlines. According to OAG data for October 2016 the alliance operates almost 4,300 routes from 1,058 airports in 190 countries. Around 3.5 billion passengers flew around the world last year according to IATA, meaning that approximately 18% to 19% of passengers would have flown on a service operated by a Star carrier.

United Airlines is the largest member of Star, with the US carrier occupying a little under 19% of the alliance’s monthly seat capacity, a majority which has remained consistent over the past 12 months. It should be noted that United’s rise to the top of the Star membership list is due to its merger with Continental Airlines (which was also a member) in 2010. Before then it was Lufthansa which was number one. 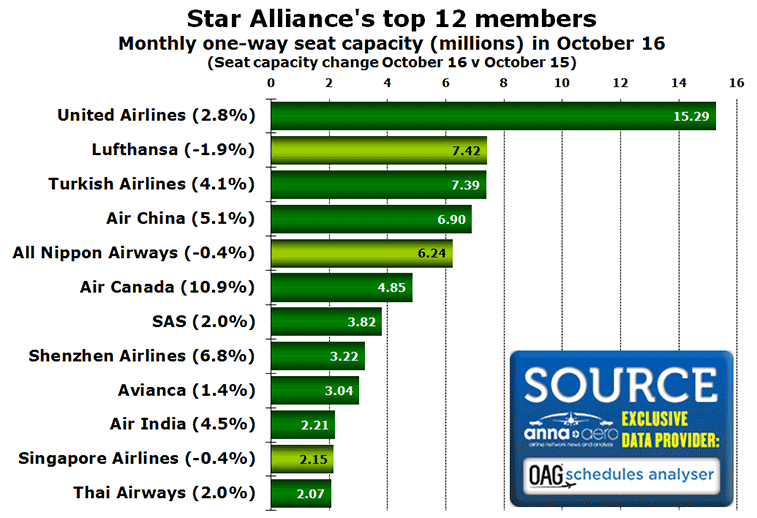 Along with the three airlines in the Star top 12 (highlighted in light green) that are showing slumps in capacity when compared to October 2015, the following members are also showcasing capacity declines: Asiana Airlines (14th; 0.7%); Aegean Airlines (23rd; 9.2%); and EGYPTAIR (24th; 8.1%). The remaining four members of the alliance that have not already been mentioned have all recorded respectable growth within the past year, with Air New Zealand (15th) capacity up 5.3%, TAP Portugal (17th) 4.8%, plus Copa Airlines (18th) and South African Airways (21st) which are both reporting capacity growth of 0.2%.

After reporting a rise in capacity of 0.7% during the past 12 months, Frankfurt – the HQ for Star – is the number one hub for the alliance. However, what should be noted is the growth of second place airport Istanbul Atatürk, which reported a growth in Star capacity of 3.0% during the past 12 months. Nonetheless external factors in Turkey are currently affecting its economy, meaning Atatürk may struggle to overtake Frankfurt, despite the latter only having a 21,000 net seat advantage over its Turkish competitor. It should be noted that Turkish Airlines is planning to reduce its capacity growth over the coming months. Frankfurt currently has a net advantage in monthly seats over Beijing – third largest Star airport – of 550,000. But if the rates of growth for both airports are maintained over the coming years, with Beijing seeing the advantage of having Juneyao Airlines joining Star next year (in more detail below), than the Chinese capital will overtake Frankfurt to be the alliance’s number one hub by 2018. Juneyao Airlines currently links the Beijing to Shanghai Hongqiao with just under 10,000 monthly seats. 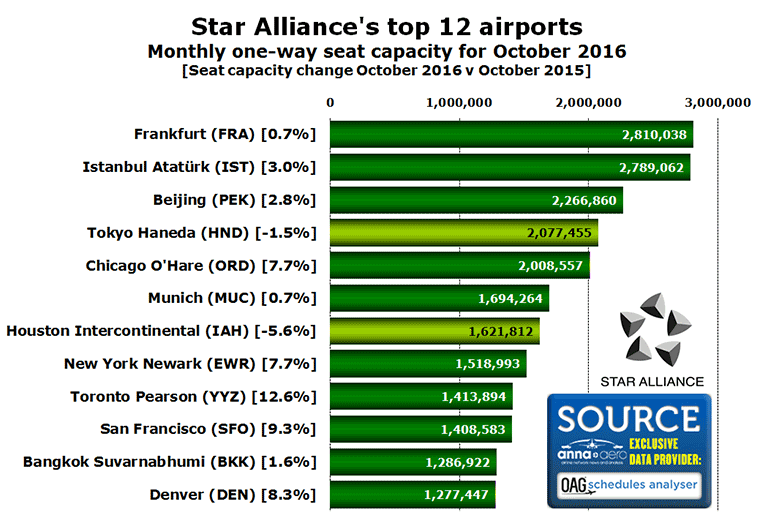 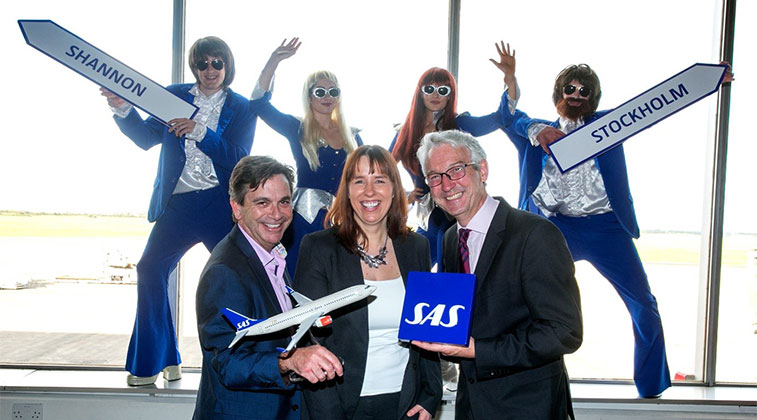 One airport which will be seeing an increase in Star capacity next summer by welcoming its second carrier from the alliance is Shannon. On 11 October SAS, the seventh largest airline in Star, announced that it will commence a twice-weekly service from Stockholm Arlanda in S17. Seen celebrating the announcement, along with an ABBA tribute act, are: Declan Power, Head of Aviation Development, Shannon Airport; Isabel Harrison, B2B Manager, Shannon Airport; and Alan Sparling, MD of GSA for SAS, Ireland. Currently Arlanda is the 23rd largest Star airport, with it welcoming a 4.7% rise in capacity from alliance members during the past year. Shannon’s Star capacity has remained consistent at just over 5,200 monthly seats with United.

With over 470 million one-way ASKs in October, Star’s number one route is the city pairing between Singapore and London Heathrow. The only Star member that operates this airport link is Singapore Airlines. The only other carrier on the link is oneworld member British Airways which offers around 20,000 fewer seats per month than its Star rival. The airline has grown ASKs on Star’s number one route by 0.2% during the past 12 months. 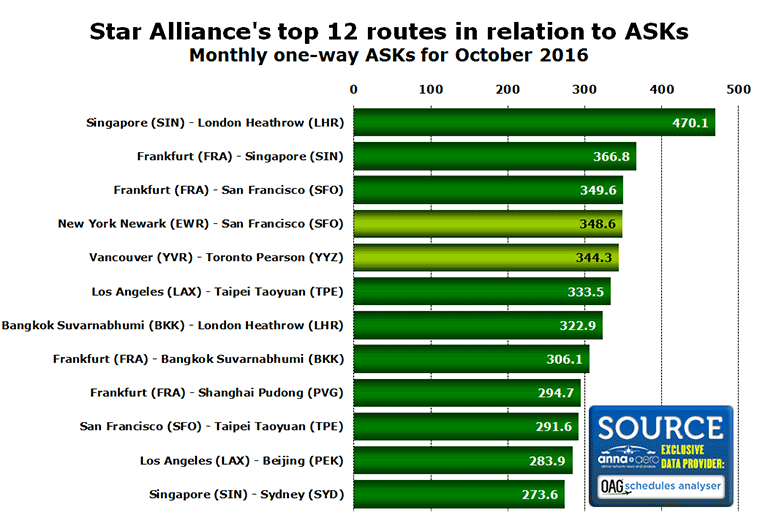 Of Star’s top 12 ASK routes, only two (highlighted in light green) are domestic connections, with those being United’s route from New York Newark to San Francisco, and Air Canada’s link between Toronto Pearson and Vancouver. It will come as no surprise to note that a vast majority of Star’s top routes in relation to ASKs are long-haul sectors. Looking at the top 25 routes in relation to ASKs, only 20% of them are routes that are within a defined global region, with four of those being US domestic services.

Looking at Star’s top routes in relation to seat capacity, one which stands out is the domestic connection between Istanbul Atatürk and Ankara (11th largest), an airport pair which is 100% Star territory. anna.aero’s recent analysis of the new U-FLY Alliance showed that it was achieving around 20% market share on its top routes. However Star has managed to gain a minimum of at least 31% of seat capacity on its top 12 sectors. What should also be noted is that although United is the number one carrier within the alliance, it does not operate on any of Star’s top 12 routes in relation to seats, with a majority of the sectors being in Asia. Another interesting factoid is that the airport pairing of Toronto Pearson and Vancouver is the only one to appear in the top 12 routes for ASKs and seat capacity. 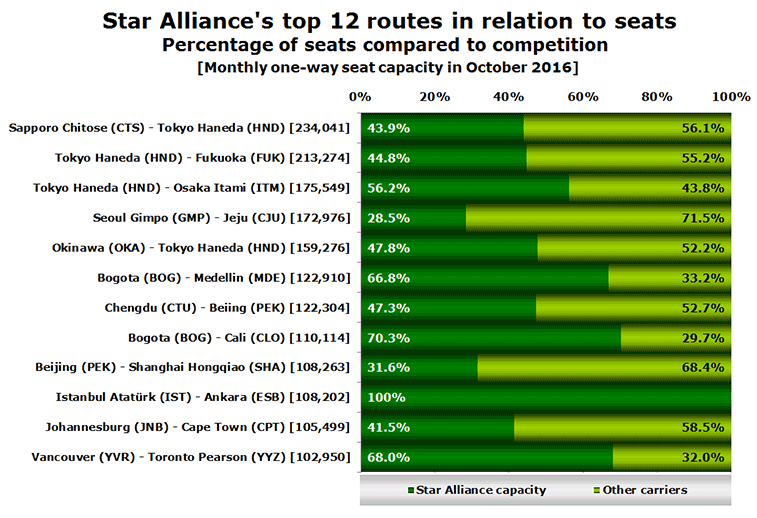 On 10 October Juneyao Airlines announced that it will join Star. It has stated that it will join the alliance as a “connecting partner” rather than as a full member, linking it up with airlines including Singapore Airlines, Lufthansa and Air China from Shanghai Pudong, the carrier said at the announcement. “Putting our networks together allows us to cover the whole globe,” Juneyao Airlines VP of Marketing, Yu Chengji, said at the announcement. The airline, one of China’s largest private carriers, said it aimed to open new routes to North America, Europe and Australia by 2020, and that joining the alliance would help add at least 700 new routes to its network. The carrier’s agreement with Star will come into effect in Q2 of 2017. Currently Juneyao Airlines (as of October 2016) offers just under 1.3 million monthly seats, which would help grow Star’s seat capacity by around 16% based on its’s currently monthly offering. But this of course will only be the case if the Chinese airline becomes a full member. With the current connecting partner agreement, the carrier will only offer Star connectivity from Shanghai Pudong. Juneyao Airlines currently provides around 280,000 monthly seats from Pudong, meaning it will only increase Star’s seat capacity by around 3.5% next year. 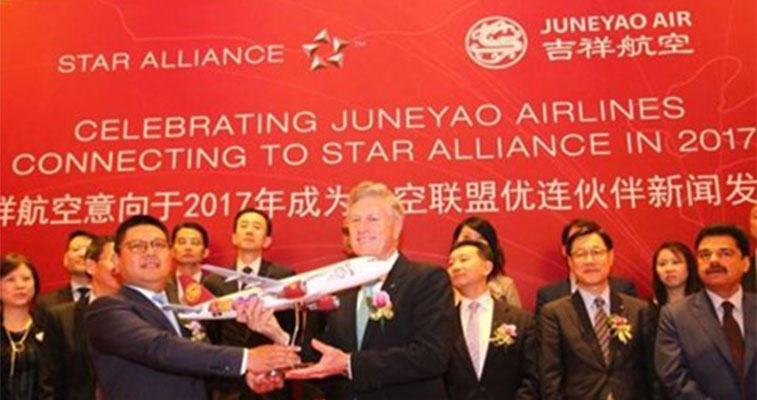 Juneyao Airlines on 10 October confirmed that from 2017 it will become a connecting partner of Star Alliance at a ceremony in Shanghai. Based on current statistics, the airline will increase the alliance’s seat capacity by around 16%.