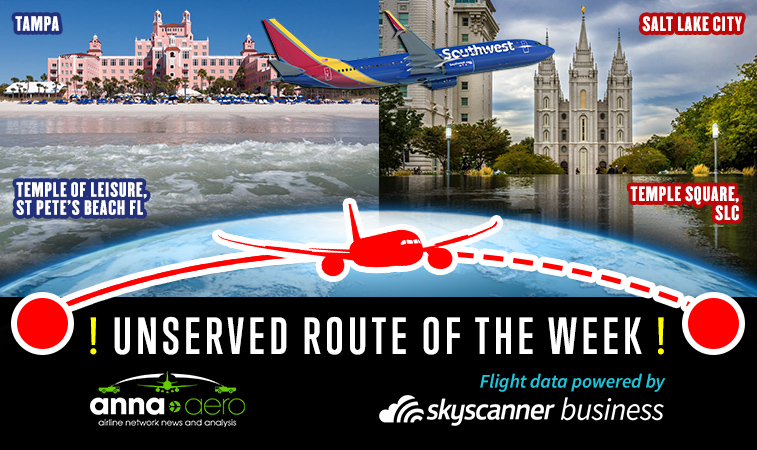 Southwest Airlines is the leading player at Tampa where it already has 32 destinations. In the last year 25,000 frustrated travellers searched Skyscanner for a Tampa-Salt Lake City flight – add that total to all those who go on Southwest’s own website, only to find out that it doesn’t serve the route, and you probably get a very big number indeed!

With 25,000 searches in the last 12 months, a potential new route from Tampa to Salt Lake City has been identified as this week’s “Skyscanner for Business-anna.aero Unserved Route of Week” – a powerful  analysis based on aspirational data captured from the Skyscanner.net flight comparison site used by +50 million unique visitors per month. “A Salt Lake-Tampa route offers a substantial fare premium over similar service to Orlando,” says Kenneth Strickland, Director of Air Service Development, Tampa Airport. The robustness of the potential service is backed-up at the other end of the domestic city pair too: “Tampa is the second biggest underserved market from Salt Lake,” confirms Nancy Volmer, Director of PR and Marketing at the Utah airport. 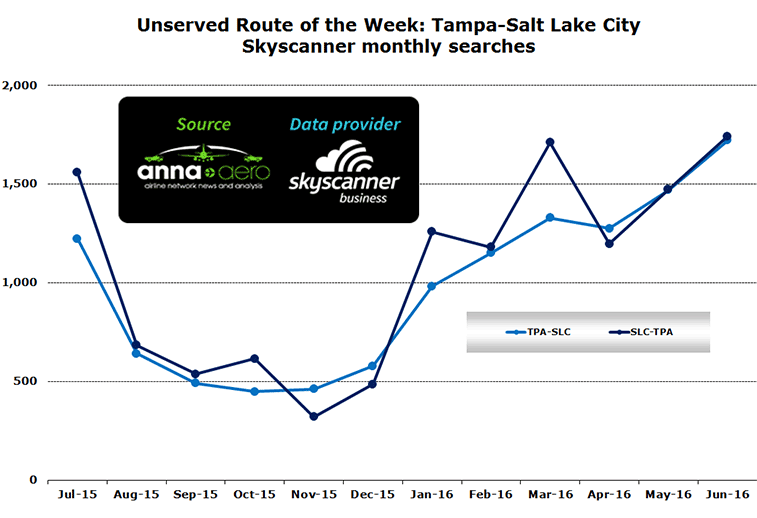 anna.aero advocates Delta or Southwest onto this sector

With the traffic on this route indicating a near-even 52/48 split marginally in favour of Salt Lake, the potential carriers at the Utah end of the route were therefore considered first. As expected, the airport’s based hub carrier, Delta Air Lines, is currently the largest airline (70% share) in terms of weekly capacity, according to OAG schedules data for the week commencing 11 October. Delta, which is the country’s second largest carrier (in terms of weekly seats), behind American Airlines, currently operates to 87 destinations from Salt Lake, but only one in Florida – Orlando. So further expansion in the Sunshine State would seem possible for the SkyTeam carrier, especially as it already flies to 16 Florida destinations from its Atlanta hub, including Tampa (presumably it is currently happy to filter SLC-Tampa traffic via Atlanta – perhaps when Delta sees this Skyscanner data, it will change its mind!!!) “Investigating the Salt Lake route is a particularly timely opportunity given Delta CEO Ed Bastian’s recent comments indicating a desire for additional build-out of the carrier’s hub network from there,” suggests Strickland.

Salt Lake’s second largest carrier based on weekly seats, Southwest Airlines, currently has an 11% share of capacity at the airport. However, SLC is more of a Southwest spoke than a hub, serving eight airports on the LCC’s network – Chicago Midway, Phoenix, Denver, Baltimore/Washington, Las Vegas, Oakland, Los Angeles and Dallas Love Field. “Our PDEWs on the route for the year-ending Q1 2016 indicate a figure of over 90,” adds Strickland.

Contemplating the Florida end of the route, Southwest (34% share) is presently the leading player at Tampa, also the carrier’s 18th biggest base operation in terms of weekly seats. The airline also has existing services to 32 destinations across the US from Tampa, but with none in Utah. So given the LCC’s strong market presence at both ends of the route, this would appear to be a gilt-edged opportunity for Southwest. Checking the airline’s website, it presently encourages passengers to transfer in places like Denver, Chicago Midway and Las Vegas to get between the two cities. “Tampa, as well as Florida’s Gulf Coast, is a good tourism market for Salt Lake,” comments Volmer. “Additionally, there are a lot of ski clubs in Florida who could access Utah’s resorts more conveniently if a non-stop flight from Tampa to Salt Lake was available.”

When looking at the previous year of search data, the busiest month for potential traffic flows (for both directions on the route combined) is June 2016, with over 3,400, over 2,500 higher than the lowest monthly figure, which was recorded in November 2015 (800). The seasonality profile of this search data is more extreme than the last Unserved Route of the Week (Cork to Rome), with the low-month traffic representing 23% of the highest month. According to OAG Traffic Analyser, because there is no direct service, the top three connecting options chosen by those passengers who did book travel between Tampa and Salt Lake in the past year indicates that the majority of connecting passengers use Atlanta (20%), Denver (19%), and Houston Intercontinental (11%). Interestingly, 30 different airports have been used by potential passengers as transfer points to get between the two cities.

An O&D that is not served by a non-stop flight will typically display a low purchase rate and low traffic. In this instance Skyscanner’s Travel Insight indicates a monthly average of 2.8% for the Tampa to Salt Lake route (see graph below). Therefore, if there was a Tampa to Salt Lake route, and if bookings performed in line with the “Skyscanner market average” for direct services at both airports (4.4%), the airline operating this route could immediately expect an improved purchase rate of 55%, without any increased marketing spend. However, with nearly 25,000 annual searches, the potential city pair should already be very sustainable. 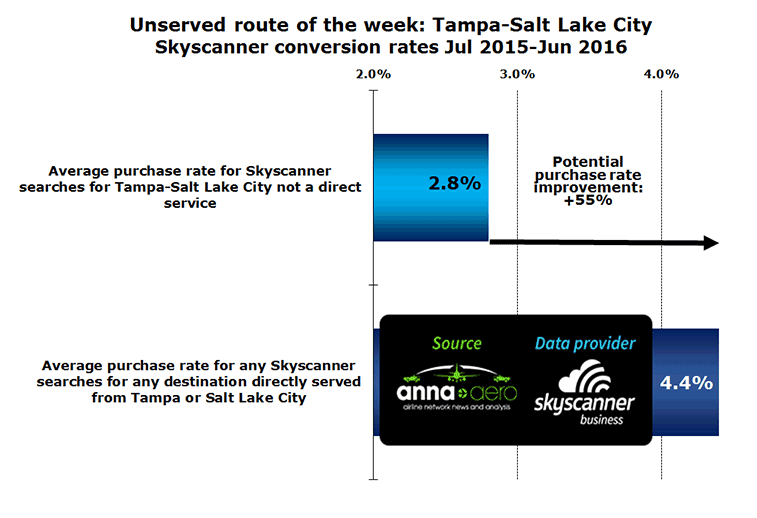