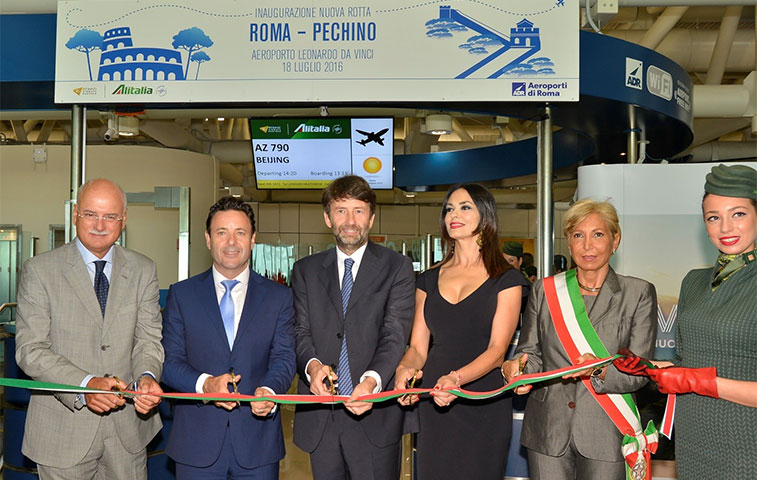 Back to Beijing. Alitalia resumed service from Rome Fiumicino to Beijing on 18 July 2016. It had previously served the Chinese capital from June 2011 to March 2013. Despite being the dominant carrier at both Rome Fiumicino and Milan Linate, the Italian flag-carrier does not offer quite as many seats from Italian airports as Europe’s biggest (U)LCC, Ryanair.

Italy is Europe’s sixth biggest aviation market as measured by passengers passing through the country’s airports. In 2015, Italy’s airports handled almost 160 million passengers, beaten only by the UK, Germany, Spain, Turkey and France. However, Italy has more airports handling more than one million passengers (23) than any other country in Europe. For many years the country’s national airline, Alitalia, has been in apparent crisis, but things seem to have settled down since Etihad Airways rescued the airline in late 2014. In the eight year period between 1999 and 2007, Italy’s airports saw total passenger traffic grow by 66% from 81.4 million to 134.8 million. However, in the subsequent eight year period to 2015, total growth was a more modest 16%. While total traffic between 1999 and 2015 grew by 71%, domestic traffic increased by just 30%, while international traffic more than doubled. 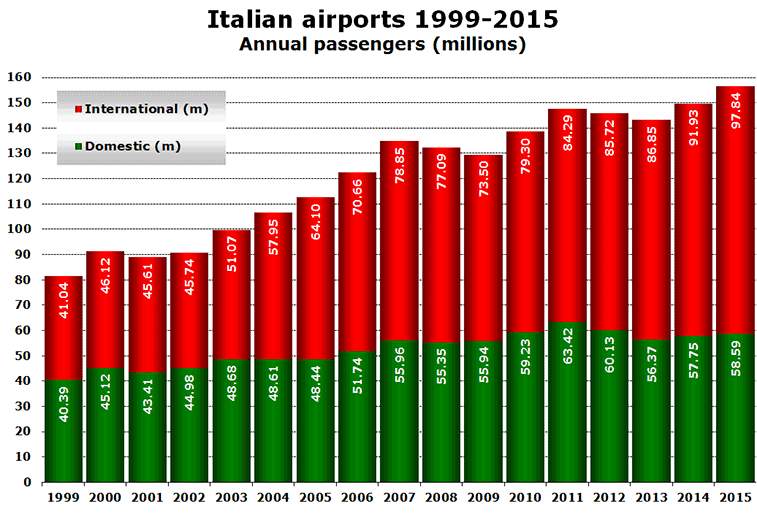 In the first eight months of 2016 passenger numbers across Italy’s almost 40 commercial airports is up 4.4%, with international traffic (+5.5%) growing faster than domestic demand (+2.6%). Of the top 20 airports, three are reporting double-digit growth; Olbia (+13.1%), Bologna (+12.6%) and Palermo (+10.5%), though Venice Marco Polo comes close with a 9.9% increase in passenger numbers. Only two have seen a reduction in traffic compared with the same period in 2015; Cagliari (-0.8%) and Rome Ciampino (-6.0%). The latter’s traffic will suffer more this year, as the airport is closing from 14 to 29 October to undertake essential runway works. 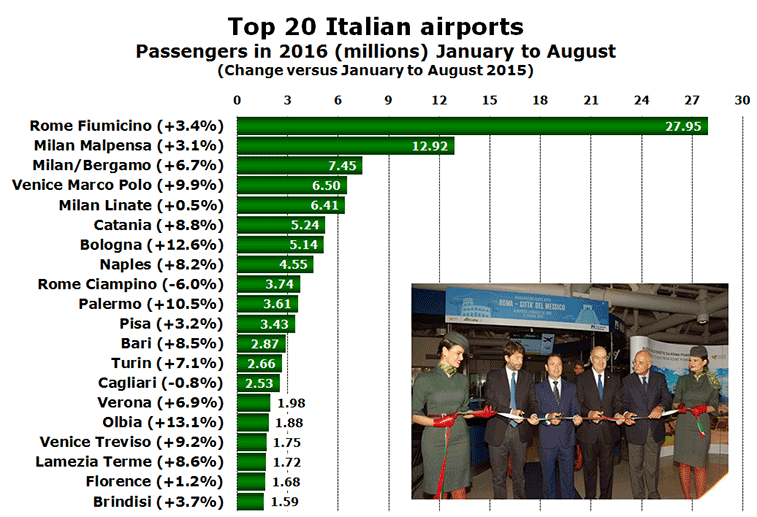 Looking at the leading airlines operating from Italian airports, Ryanair is now marginally bigger than Alitalia in terms of seat capacity this summer. It has also increased its seat capacity slightly more than the Italian flag-carrier compared with last summer. Among the top 10 airlines, Volotea is the fastest-growing. The LCC, which only launched in 2012, has increased its presence in the Italian market by over 30% compared with last summer. Another (U)LCC in the top 10, Wizz Air, has also grown its seat capacity in Italy by more than 10% this summer. Among the slightly smaller players in the Italian market, Blue Air has more than doubled its capacity in Italy, partly thanks to significant expansion at its base in Turin. 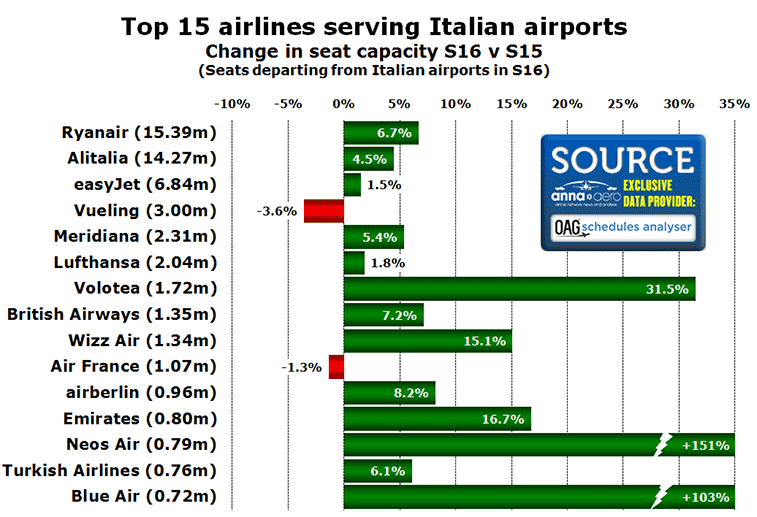 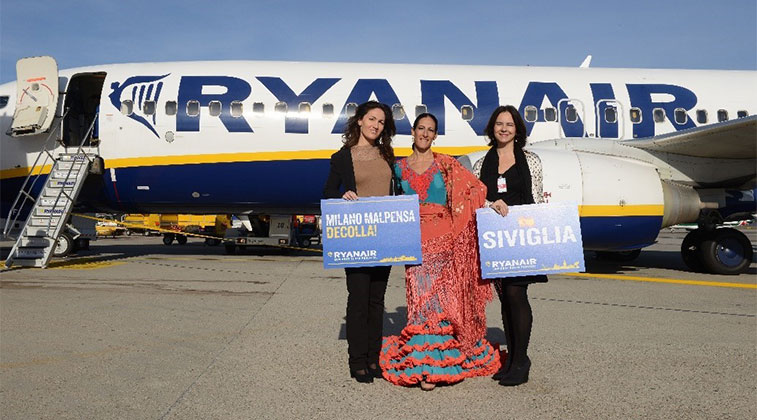 Ryanair’s decision to make Milan Malpensa its 73rd base at the end of December 2015 included launching a thrice-weekly service to Seville.

Alitalia’s biggest presence is, not surprisingly, at Rome Fiumicino and Milan Linate where it is the busiest carrier. easyJet is the biggest carrier at Milan Malpensa and Venice Marco Polo. Outside of the four busiest airports, Ryanair is often the biggest carrier, though it is notably absent from Naples and Olbia. Meridiana, in which Qatar Airways recently took a stake, is biggest in Olbia, while Volotea is tops in Verona. 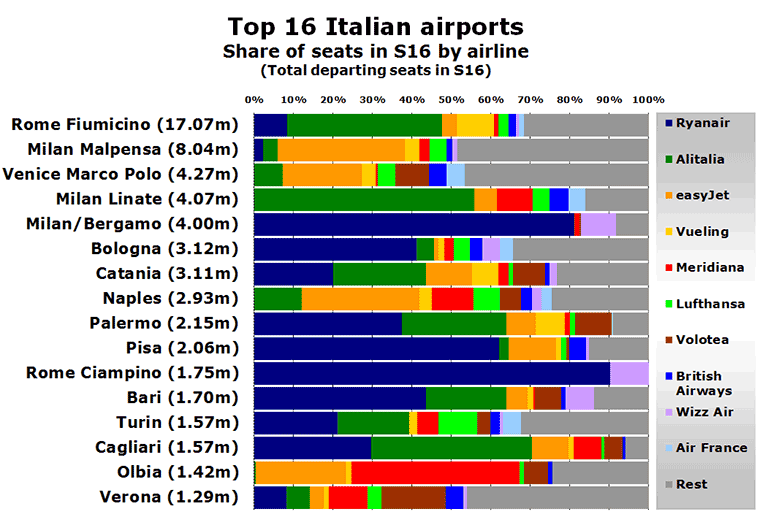 Analysis of annual seat capacity by carrier reveals how LCCs have been taking an ever greater share of the total market with Ryanair leading the way. In 2015, the top six LCCs in Italy had around 43% of total seat capacity, but this has remained virtually unchanged in 2016 despite Blue Air’s growth. Both easyJet and Vueling have seen their share of the total market decrease slightly. easyJet closed its Rome Fiumcino base this summer (though continued to serve the airport from a number of its other bases), while Vueling chose not to expand its Rome and Florence operations and made severe cutbacks to its Turin network. 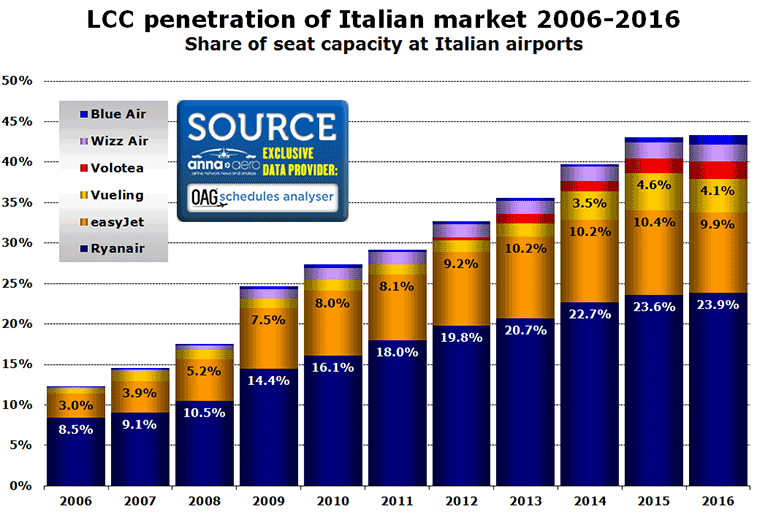 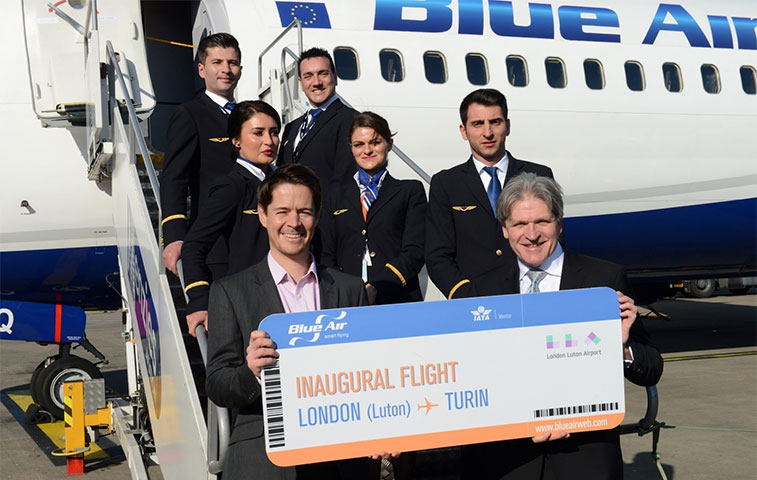 Blue Air’s expansion in Turin included launching a four times weekly service to London Luton at the start of the S16 season.

Looking at the leading country markets served from Italy, Germany has maintained its lead this summer over the UK, Spain and France, although the UK has narrowed the gap thanks to capacity growth of almost 17% compared with just over 12% for Germany. EU markets lead the way, with the leading non-EU country (shown in light green) being the US ahead of Switzerland, Turkey, the UAE and Russia. According to OAG data, Italy was connected to 86 country markets this summer, with Chile the biggest new market thanks to Alitalia launching a five times weekly non-stop service to Santiago on 1 May. 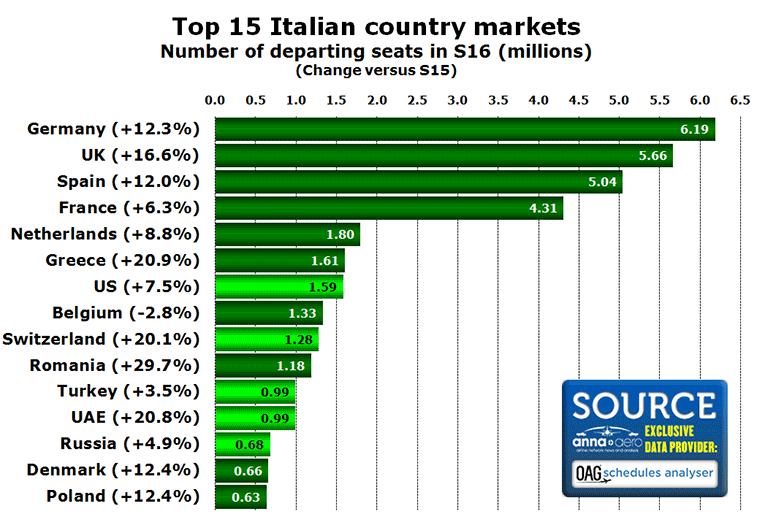 Alitalia off to Cuba, Ryanair growing in Milan, Etihad coming to Venice

Looking ahead, Alitalia is planning to start flights from Rome Fiumicino to Tenerife South at the end of October, and to Cuba at the end of November. The end of October will also see Air China begin serving Rome from Chengdu via Urumqi, while Ryanair will add new routes from Rome Ciampino to Nuremberg, Prague and Sofia. Next May, American Airlines will start serving the Italian capital from Dallas/Fort Worth. This winter will also see Ryanair expand its network from both Milan/Bergamo and Milan Malpensa, while Etihad Airways will begin serving Venice Marco Polo from its Abu Dhabi base.