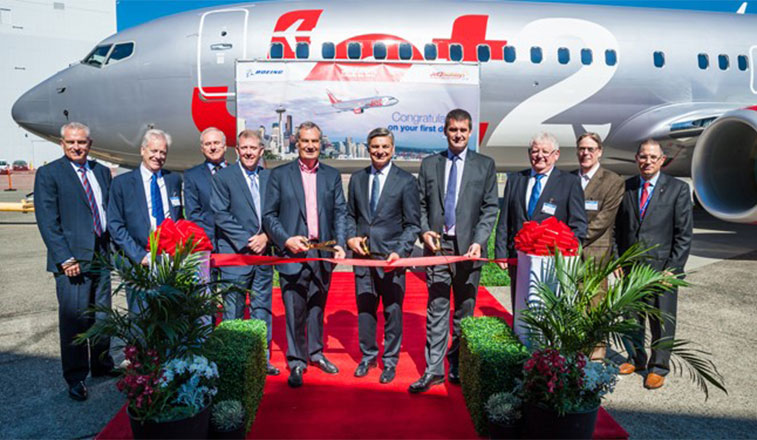 On 14 September Jet2.com welcomed the first of 30 brand-new 737-800s to be delivered to it over the next two years with the milestone achievement being celebrated with a ribbon cutting ceremony at the US manufacturer’s Seattle facility. Six of the carrier’s new aircraft will be stationed at its new London Stansted base from next summer, while another four are destined for the carrier’s other new UK base for S17, Birmingham.

Deliveries in September for Airbus and Boeing totalled 134 units, taking the collective total for both manufacturers past 1,000 for 2016, with both having distributed a total of 1,025 units up until 30 September. The total for September also means that it was the second most productive month, in relation to deliveries, for both companies this year after June (138 unit deliveries). The total of 134 aircraft deliveries was 14 more than were distributed in August, and eight more than in September 2015. August was the first month of 2016 where Airbus had handed over more units than Boeing. However the US-based manufacturer clinched back its leading stance over its European counterpart by delivering 10 more aircraft than Airbus in September. Boeing delivered 72 units, while Airbus managed 62. Overall for 2016, Boeing has opened the gap it has over Airbus in relation to deliveries to 101 units. For the same nine-month period last year the US producer had a 130 unit advantage over its European rival. However, in September Airbus delivered 13 more aircraft than it did in the same month last year, while Boeing handed over five fewer. In relation to the distribution of narrow-body and wide-body aircraft, 74% of deliveries last month were narrow-body, with the remaining 26% being wide-body. 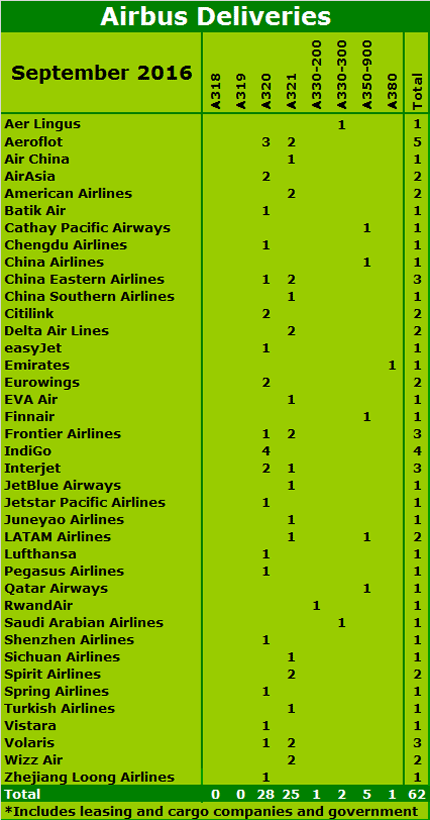 Airbus ended September with a total of 62 unit deliveries, one more than it delivered in August, and 13 more than it distributed during the corresponding month of last year. In September, single-aisle deliveries were led by the A320 (28 units – eight more than August), while the A321 was the second most popular type (25 units – one less than August). This means that a total of 53 single-aisle units were distributed to clients around the world in September, resulting in Airbus, for a third month in a row, delivering more single-aisle units than Boeing. The North American manufacturer distributed seven fewer narrow-body aircraft than Airbus last month. A total of 18 airlines received the A320 in September, four more airlines than the month before. IndiGo was the largest recipient of the type, picking up four. Aeroflot was the second largest customer, collecting three while AirAsia, Citilink, Eurowings and Interjet each picked up two. In relation to A321 deliveries, 17 airlines received the type (one fewer than in August). Aeroflot, American Airlines, China Eastern Airlines, Delta Air Lines, Frontier Airlines, Spirit Airlines, Volaris and Wizz Air each welcomed two of the type into their respective fleets last month. It should be noted that Aeroflot, China Eastern Airlines, Frontier Airlines and Interjet each collected one A320 and A321 each in September. For Interjet, this was the first A321 that it has welcomed into its fleet, with the carrier having an order for three of the type. “This A321, the first in our fleet, will be used by Interjet in high-density domestic and international flight operations from Mexico City, raising our efficiency from this airport,” said Jose Luis Garza, CEO of Interjet.

In relation to the wide-body market, Airbus handed over nine units in September, five fewer than in August. After handing over one A380 in August to Emirates, Airbus repeated the same transaction by doing the same in September, cementing Emirates’ status as being the world’s largest A380 operator. Five A350s were handed over in September, narrowly beating the record-breaking six unit deliveries of the type the month before. The most significant of these five deliveries was to China Airlines – the first A350 for the carrier. This now means that nine airlines operate the A350. Another milestone for Airbus in September was the manufacturer handing over the first A330-200 to RwandAir. On 30 September China Airlines became the ninth carrier to welcome the A350. Seen welcoming the aircraft into the Asian airline’s fleet in Toulouse are: Phil Harris, SVP Sales-Civil Aerospace, Rolls-Royce; Nuan-Hsuan Ho, Chairman of China Airlines; Didier Evrard, Airbus Executive VP – Head of Programmes; and Ming-Zong Zhang, Representative of Taiwan in France. After an initial period flying on regional services between Taipei Taoyuan and Hong Kong, the aircraft will be deployed on long-haul flights, starting with Amsterdam, followed by Vienna and Rome Fiumicino. China Airlines has a total of 14 orders for the aircraft type. 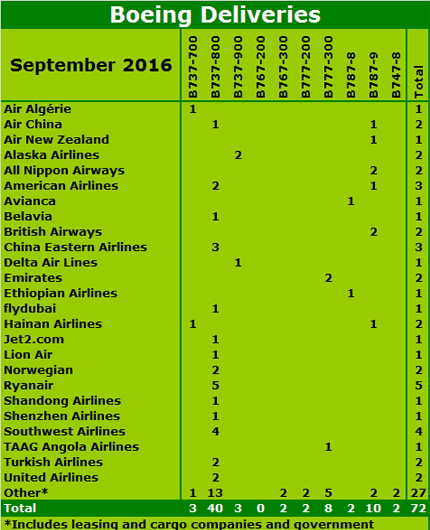 Boeing closed September with a total of 72 unit deliveries, 13 more than August, but five fewer than in the same month last year. A total of 46 narrow-body aircraft were handed over by the US manufacturer in September, eight more than the month before. A total of 40 737-800s (eight more than August) were delivered, while three 737-700s (two more than August) and three -900s (two fewer than August) were also handed over. Ryanair was the largest recipient of the -800 series, taking five units from Boeing. This takes to 37 the number of -800s that Ryanair has received from Boeing this year so far, with the other 32 having been delivered between January and April. Southwest Airlines was the second largest customer of the type in September, taking four, while China Eastern Airlines collected three, and American Airlines, Norwegian, Turkish Airlines and United Airlines each welcomed two respectively. One of the -800s was the first brand-new aircraft for UK leisure airline Jet2.com. Steve Heapy, CEO of Jet2.com & Jet2holidays said of the aircraft’s arrival: “The arrival of these new aircraft to our successful fleet is a huge milestone in the history of Jet2.com & Jet2holidays and demonstrates how committed we are to investing in growing our business and providing more choice, comfort and quality than ever before to our passengers. As we continue to flourish and fly millions of holidaymakers to more destinations than ever before, these new aircraft will help us to increase our capacity and fulfil our growth ambitions.” Air Algérie, Hainan Airlines and one leasing company each welcomed one -700 each, while Alaska Airlines was the largest recipient of the -900 by welcoming two.

An analysis of wide-body deliveries reveals that Boeing handed over a total of 26 units to airlines in September, five more than it delivered in August. Although Airbus delivered more single-aisle units in September and August, Boeing handed over more wide-body aircraft than its European rival in both months. Last month Boeing delivered 12 787s: two 787-8s and 10 787-9s. All Nippon Airways and British Airways were the largest recipients of the -9, each collecting two. In regards to the 777-300, Emirates collected two while Ethiopian Airlines received one.

RwandAir’s welcomed the first of two A330s destined for its fleet in September. The airline will deploy the aircraft on medium- and long-haul routes from its Kigali base to destinations throughout Europe, Asia and the Middle East. The aircraft’s first flight to Dubai was welcomed with a water arch salute at the Middle Eastern hub.