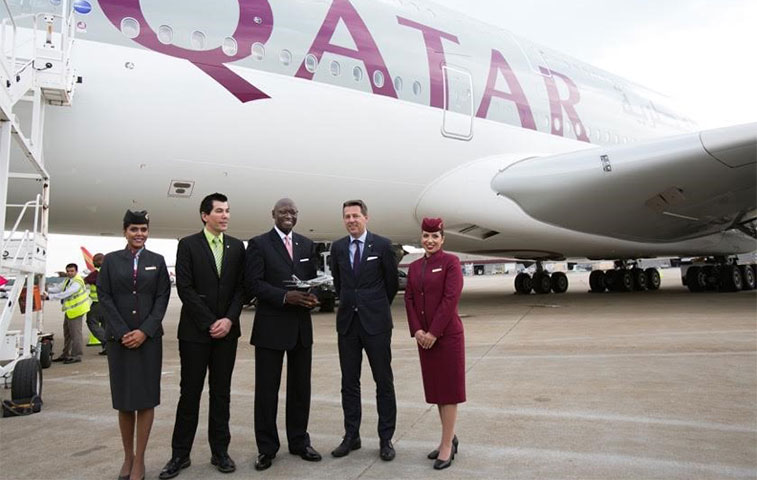 Atlanta is the largest city and capital of the state of Georgia in the US. According to 2015 estimates, Atlanta’s city region has a population of just over 460,000, but taking into account its metropolitan region, it has a population of just over 5.7 million. This means that Atlanta has the ninth largest metropolitan area in the US, sitting behind Miami in seventh (6.1 million) but ahead of Boston (4.8 million). Since 2010, Atlanta’s metropolitan area population has grown by approximately 8%. In 2010, a study by Loughborough University in the UK placed Atlanta as one of four US cities to be classed as an alpha world city. Over 75% of Fortune 1000 companies have a presence in the Atlanta area, and the region hosts offices for about 1,250 multinational corporations. One of the most important contributors to the city’s economy is its airport – Hartsfield-Jackson Atlanta International – the world’s busiest. In fact the largest employer in the Atlanta region is Delta Air Lines, with the company employing around 31,000 people in the city based on data from the Metro Atlanta Chamber of Commerce.

Atlanta Airport traffic falls for the first time since December 2014

August this year has been the first month since December 2014 to see traffic drop at Atlanta. Passenger throughput at the world’s busiest airport fell 2.7% when compared to the same month of 2015, with domestic traffic in August falling 3.0% and international down 0.3%. Putting August aside, Atlanta has been reporting an average month-on-month growth in traffic for 2016 of 4.1%. Domestic traffic has been growing at a monthly average of 3.1% and international has been showcasing a modest increase of 3.9%. Nonetheless, it should be noted that for the eight-month period from January to August, traffic at Atlanta has grown 3.0% when compared to the same time of last year, with just over 69.5 million passengers travelling through the Georgia hub. 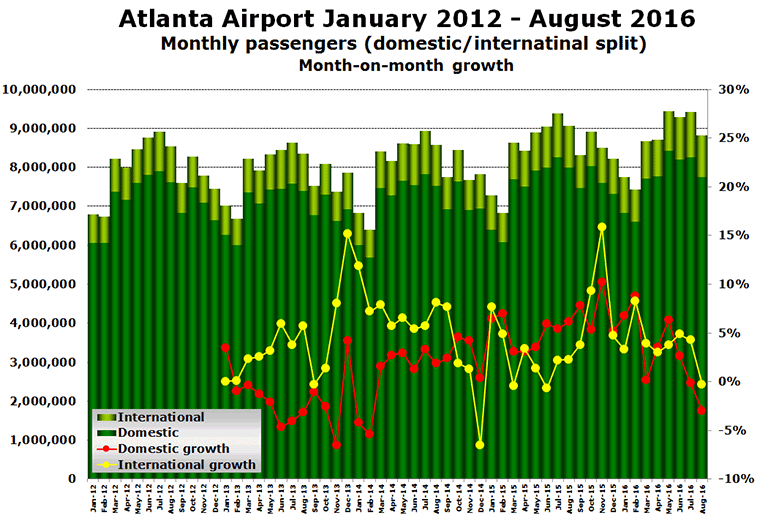 Atlanta Airport was the first in the world to pass 100 million passengers in a 12-month period, with the hub welcoming over 101 million customers in 2015. If Atlanta’s average growth of 3.0% is to continue for the remainder of 2016, than the facility can expect to welcome an extra three million passengers this year. anna.aero predicts that Atlanta will welcome between 104 and 105 million passengers in 2016. Entering Atlanta’s monthly passenger data for 2015 into anna.aero’s Seasonal Variation in Demand (SVID) calculator, the airport performs well, generating a score of 0.85 – an ‘Excellent’ rating.

Delta Air Lines using more of its own metal at Atlanta

When we take a closer look at the airline’s operation including Delta Connection traffic, the carrier achieves between 69% and 80% share of passenger traffic from Atlanta in the time period analysed, with traffic passing the 80% mark in 2014. This analysis has taken into account Delta Connection operations by ExpressJet Airlines, SkyWest Airlines and Endeavor Air. During the time period analysed anna.aero knows that other carriers which fly for Delta Connection will have flown into Atlanta, however we have looked at the airlines that are currently using the airport as of 2016. Nonetheless the percentage difference if those airlines were also analysed would be minimal. 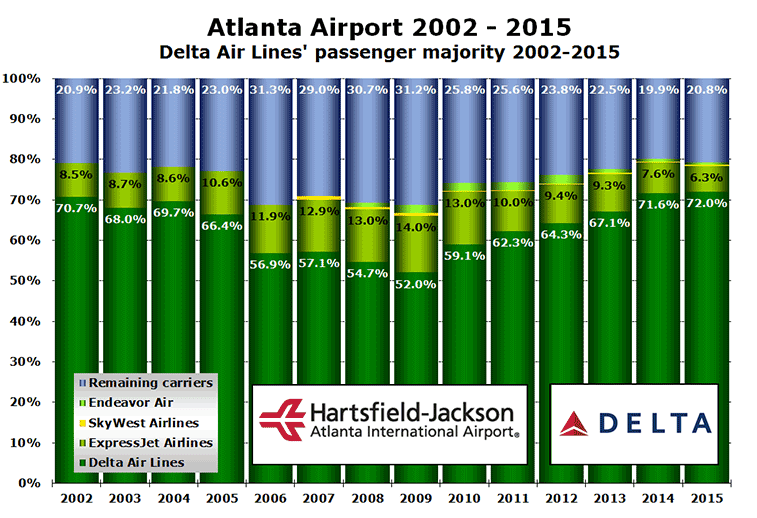 Four Floridian airports make it into the top 10

The top 10 domestic routes from Atlanta transported 10.6 million passengers between August 2015 and July this year, meaning that these routes carried just over 10% of the airport’s total passengers during that time. During the 12-month period, traffic on Atlanta’s top 10 routes has grown by 8.2%, from 9.8 million from August 2014 – July 2015 to 10.6 million between August 2015 and July 2016. Of Atlanta’s top 10 US routes only one, Dallas/Fort Worth (highlighted in light green below), has seen a drop in traffic, with passenger numbers falling by 3.8% during the period analysed. Of Atlanta’s top 10 domestic services, four are in Florida (highlighted in blue), with three of them being in the top four: Orlando, Fort Lauderdale and Tampa. 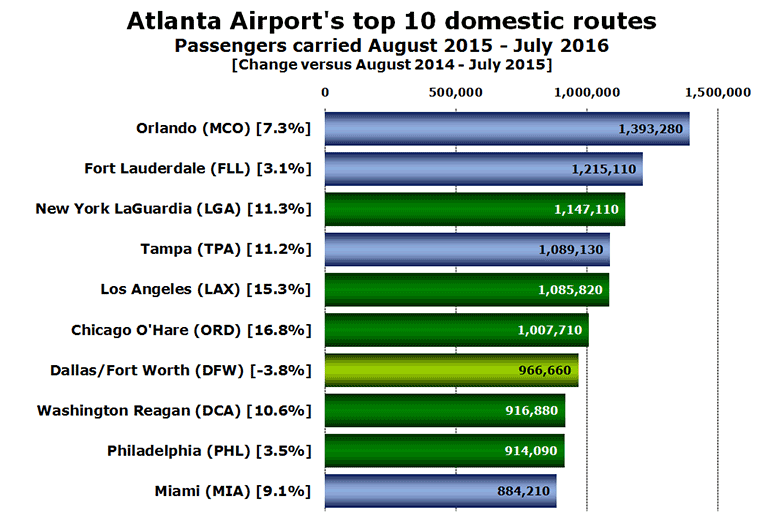 Seat capacity up 3.3%; Brasilia and Dubai cut from network

During the past 12 months, weekly seat capacity to Atlanta has grown 3.3% to nearly 1.2 million one-way seats. Looking at OAG schedules for October, Atlanta boasts an impressive network of 218 routes, a net gain of seven destinations when compared to the same period of 2015. Of those 218 destinations, only 59 are international. It appears that Atlanta has lost connectivity to two destinations during the past year – Brasilia and Dubai. Delta ended flights to the Brazilian capital on 29 November last year, a route it operated thrice-weekly. The most significant drop however is that to Dubai, a market now open for Emirates to take over if it chooses to. Up until 10 February, Delta operated a four times weekly service to the Middle Eastern hub. Looking at OAG Traffic Analyser data, around 80,000 passengers flew between the world’s largest hub and world’s largest international airport non-stop in 2015, giving an average load factor of around 88% based on schedules data. So with a respectable load factor, and Qatar Airways adding flights to Atlanta this year to give friendly competition, could this be enough to tempt Emirates onto this vacant route?

As stated, Delta is the largest airline at Atlanta, and OAG schedules show that the SkyTeam member commands nearly 79% of weekly seat capacity. Following Delta to gain the title of second largest airline at Atlanta is Southwest Airlines, with it occupying just over 10% of weekly seat capacity. After welcoming a modest growth in weekly seat capacity of 11% during the past year, Virgin Atlantic Airways is the largest international carrier serving Atlanta, taking the title from Air France which held the accolade last year. This is of course helped by the tie-up that the British carrier has with Delta. The increase in capacity comes as Virgin Atlantic has taken over Delta’s operation to Manchester. In relation to domestic airlines, it is United Airlines which has recorded the best growth, with its seat capacity to Atlanta up by almost 20% when compared to last year. Of Atlanta’s top 16 airlines, four (highlighted in red) have recorded cuts in capacity. 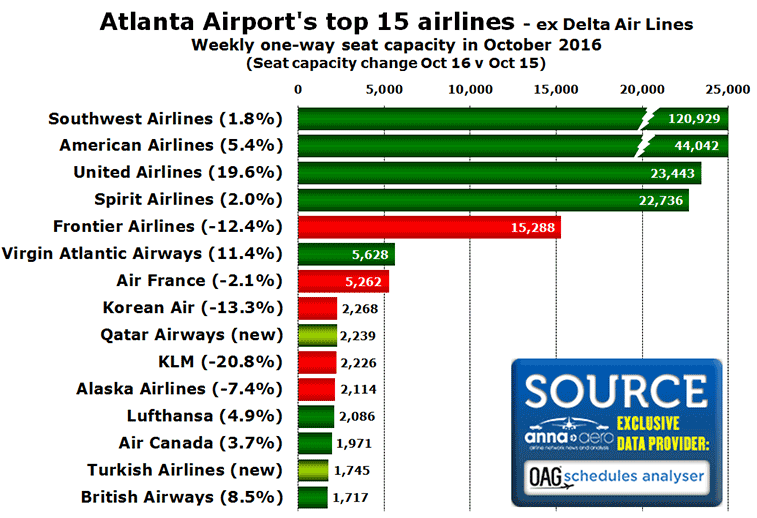 During the past year Atlanta has welcomed four new airlines. Highlighted in light green are two new carriers to grace Atlanta’s departure boards – Qatar Airways and Turkish Airlines. Qatar Airways launched flights from Doha on 1 June, while Star Alliance member Turkish began a link from Istanbul Atatürk on 16 May. Along with these two airlines a further two carriers have also commenced flights to Atlanta during the past year, with both of them completing Atlanta’s roll call of 18 airlines. Contour Airlines launched flights from Bowling Green on 29 August with a 12 times weekly service served on Jetstream 41s flown by Corporate Flight Management. The next carrier which has begun flights to Atlanta is Boutique Air, which commenced services from Muscle Shoals on 29 February using its Pilatus PC-12s.

New routes still ahead for Atlanta…

In relation to what still lies ahead for Atlanta, one of the biggest gains is a new link to Cuba. On 1 December Delta will launch flights to Havana, with no other routes to the Caribbean island currently planned from the mega-hub. Along with Havana, Delta will also commences services to Seoul Incheon from next summer, while the SkyTeam member’s route to Brussels will be reintroduced after a temporary suspension this summer. In relation to the domestic market, the carrier will add Reno-Tahoe to its network from 19 December. Coming away from Atlanta’s number one carrier, a new addition to Atlanta next summer will be JetBlue Airways. The airline will add flights from Boston on 30 March next year, marking a return to the Georgia airport after a 13-year hiatus. The airline will offer five daily flights from Boston. When JetBlue Airways last served Atlanta, it did so from Long Beach. 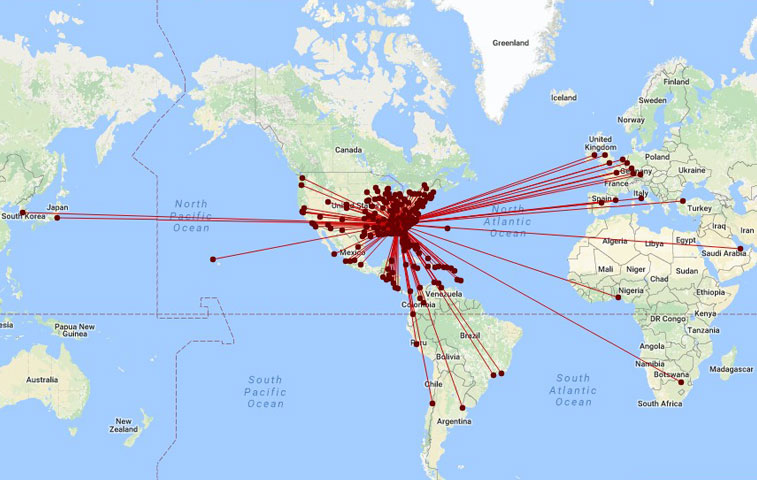 This October Atlanta is connected to 218 destinations, a net gain of seven routes when compared to the same month last year. The most significant new routes from Atlanta during the past 12 months are Doha which launched with Qatar Airways in June, and Turkish Airlines to Istanbul Atatürk in May. The next milestone destination for Atlanta is the welcoming of Delta Air Lines flights to Havana, expected to launch on 1 December.