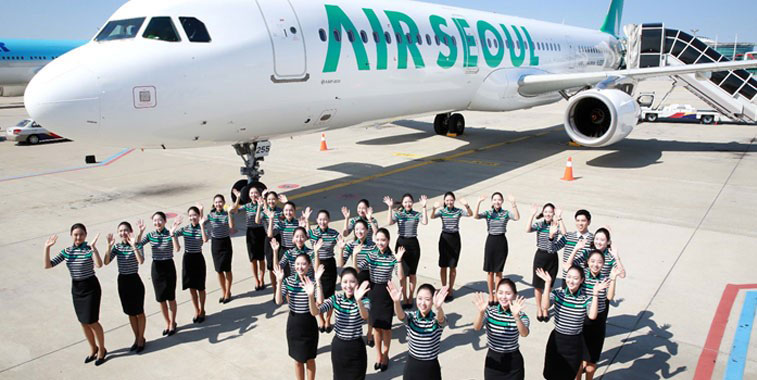 Air Seoul, a new LCC from Asiana Airlines, began operating international services from Seoul Incheon to Takamatsu and Shizuoka in Japan and Siem Reap in Cambodia from 7 October. The Korean airport, which is the ninth busiest in Asia, offers the second most international seats of the top 10 airports in the region – a jump of seven places in the rankings.

One of our data elves was recently tasked with looking at which European hubs had the most international seats against its peers. During this job for a sister publication of anna.aero, the data elf in question thought this would make an interesting article for his normal day job – comparing the respective rankings of the top 10 airports in Asia, Europe and North America in terms of annual passenger traffic (2015 figures), but then re-ordering the same airports, this time by the share of total weekly seats which international capacity commands.

China’s biggest three hubs dominate proceedings when it comes to Asia’s top 10 airports, whether in terms of sheer scale (Beijing is Asia’s busiest airport), the fastest growing (Shanghai Pudong +16%) or the most airports in top 10 (three). Of all 30 airports being analysed, Jakarta is the only one which posted a decline in 2015, as airport capacity issues in the Indonesian capital continue to cause problems. Indeed, the three lowest annual growth airports of the 30 being considered are all in Asia – Jakarta (-9.5%), Kuala Lumpur (0.0%) and Guangzhou (+0.8%). That said, it is the only region which saw two airports post double-digit growth in 2015 – Pudong (+16%) and Bangkok Suvarnabhumi (+14%). 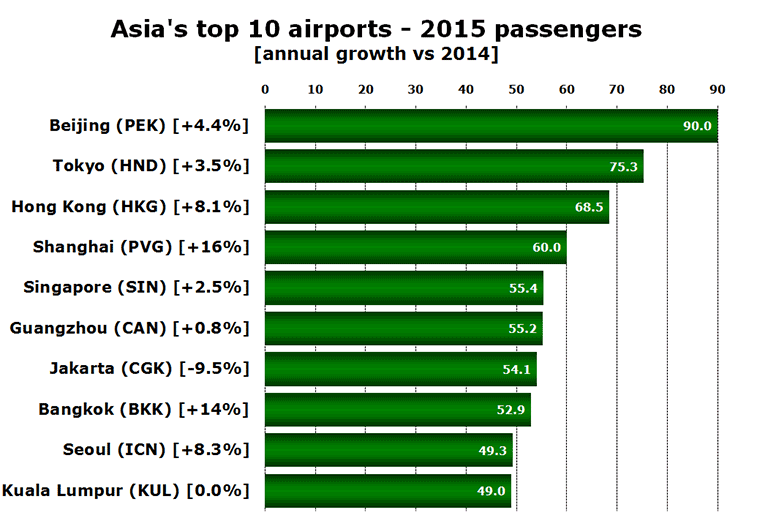 When the top 10 airports in Asia are ranked by their share of international traffic, perhaps unsurprisingly the single commercial airport island state of Singapore is #1, with not a single domestic seat on offer. Its position improved by four places, however the biggest positive mover in Asia was Seoul Incheon, which leaps from ninth to second when using this metric. Not only is Tokyo Haneda the biggest faller in Asia, but its drop of eight places from second to 10th is the worst of all 30 airports. It should be remembered however that up until 2010 the world’s fifth busiest airport in 2015 handled almost all domestic flights to and from Tokyo, as well as some limited international scheduled charter flights only. 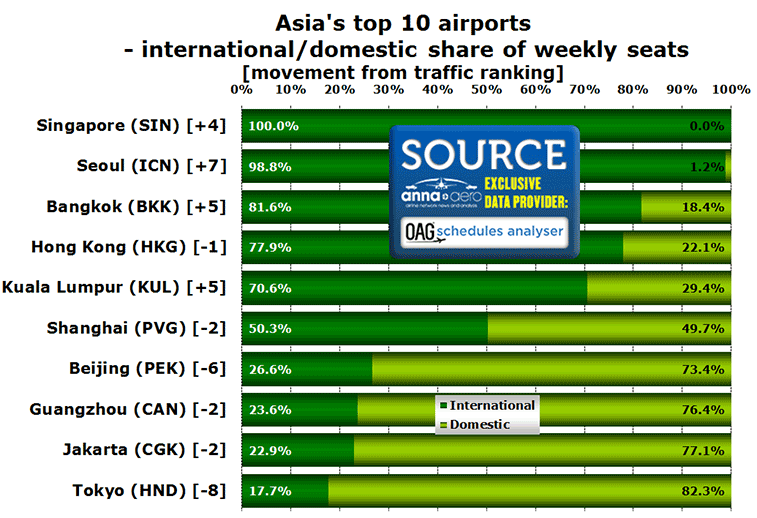 With two airports inside Europe’s top 10, London is the only city across the three regions analysed to have achieved this accolade in terms of 2015 passenger figures. As a result, the UK, along with Germany and Spain all have airports in the top 10. Of all 30 airports being analysed, Madrid was one of just three posting double-digit growth in 2015, as the Spanish capital city airport delivered an impressive 12% hike in traffic. Europe leads the way in terms of the average yearly growth achieved by the top 10 airports in each region, increasing by 5.8%, when compared to North America at 5.2% and Asia at 4.8%. 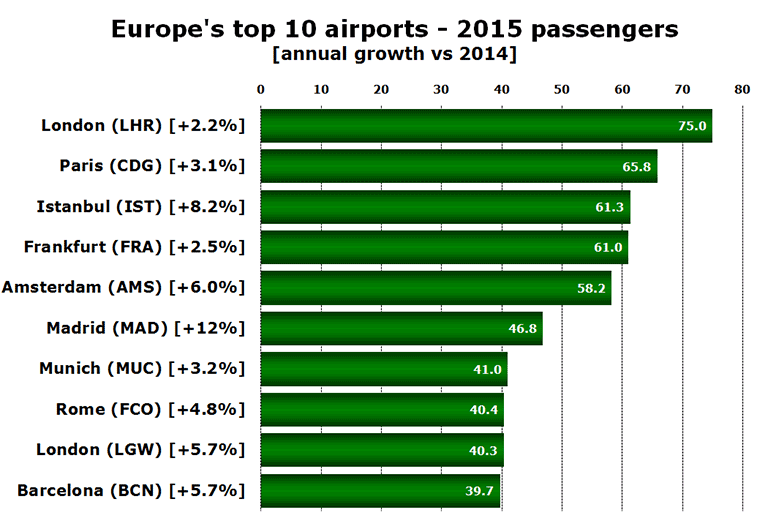 When Europe’s top 10 airports are ordered by their share of international traffic, the airport responsible for nearly 89% of all weekly departing seats in the Netherlands is #1, with just a single domestic flight (to Rotterdam) available during the week in question. Like Singapore in the Asian rankings, the Dutch global hub has improved its position by four places to reach the top spot, however the biggest positive change in places in Europe was at London Gatwick which bounds from ninth to fourth when applying this ranking method. Presumably its lesser role as a transfer hub, when compared to London Heathrow, has had a positive impact on its result, along with the fact that it offers marginally more non-stop destinations (180 vs 172) than the airport just 60 kilometres around the M25 motorway. Perhaps for the opposite reasons stated for Gatwick’s gains, Istanbul Atatürk’s tumble down the table, losing six spots, is due to its national role as Turkey’s primary domestic and international hub. 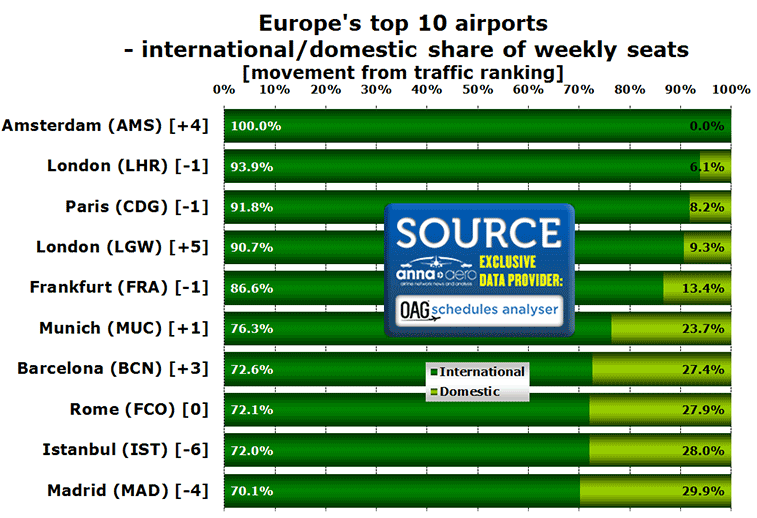 While North America might be the world’s biggest travel market, its relative maturity, when compared with the other big hitters of Europe and particularly Asia, has meant that during 2015 not one of its top 10 busiest airports managed to clock-up growth in excess of 10%, with Chicago O’Hare coming closest with a 9.8% annual increase. However, it does beat Asia in terms of having fewer airports achieving only marginal growth (3% or less) with Dallas/Fort Worth (+1.0%), Denver (+1.0%) and Charlotte Douglas (+1.4%) being the only three airports in this bracket, compared to four in Asia. There were only two airports in Europe to deliver below par growth from its top 10 – namely the global hub behemoths of Heathrow (+2.2%) and Frankfurt (+2.5%). 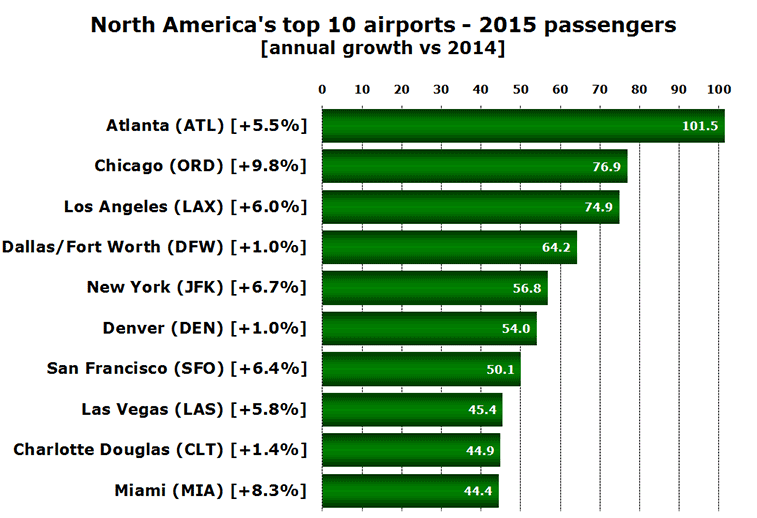 When the top 10 airports in North America are sorted by their share of international traffic, perhaps unsurprisingly there is not a single airport with close to 100% international traffic, unlike in Asia and Europe. The region also has the least amount of international traffic of all three regions. The #1 airport, New York JFK, has improved its position by four places, however the biggest positive mover in North America was Miami, which leaps from 10th to second when using this measure. Not only is the Floridian Latin American hub the biggest climber in its region, but its jump of eight places from tenth to second is the biggest improvement of all 30 airports. Interestingly, the world’s busiest airport in Atlanta, still lacks international route credentials, as it falls from number one spot to seventh. 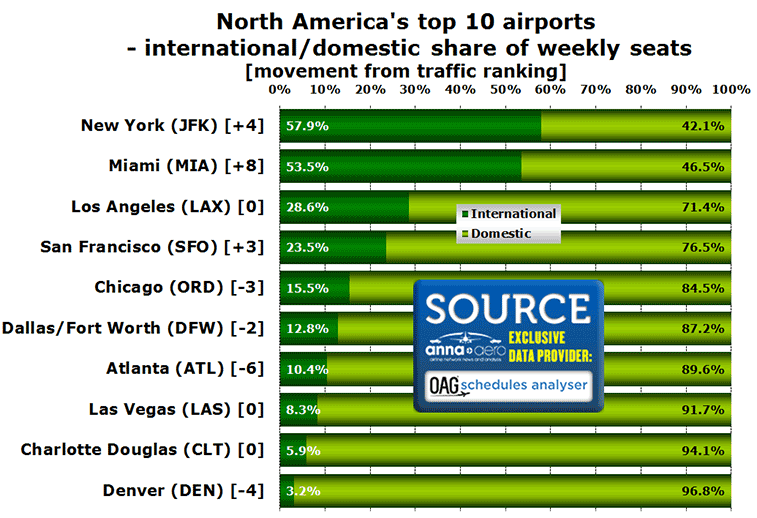 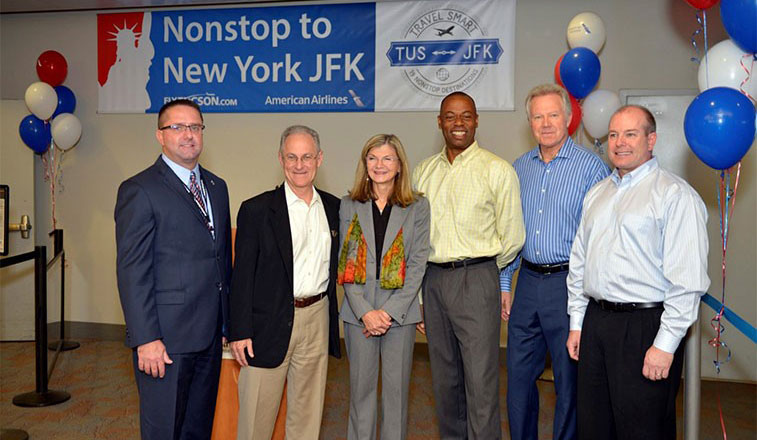 Launched by American Airlines on 6 October, was a new 3,430-kilometre city pair between New York JFK and Tucson. Despite this new domestic sector, when it comes to international capacity amongst the region’s top 10 airports, the US east coast facility, the fifth busiest in North America, has the most international seats as a percentage of its total weekly seats.