American Airlines leads the oneworld charge with 36% of alliance capacity; Dallas/Fort Worth is largest hub; LHR – HKG is #1 for ASKs 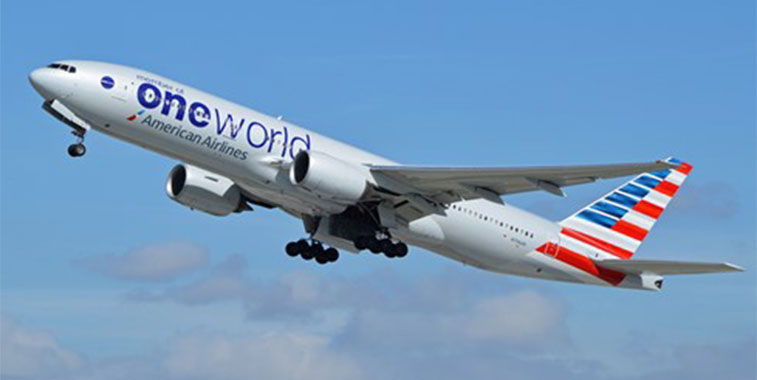 oneworld was launched on 1 February 1999. Its aim as an alliance was to be the first-choice airline alliance for the world’s frequent international travellers. The first members of the airline were unveiled in 1998 – American Airlines, British Airways, Canadian Airlines, Cathay Pacific Airways and Qantas. Canadian Airlines left the alliance a few years later when it merged with Air Canada, a Star Alliance member. Last year, across the alliance’s 14 members, oneworld welcomed 558 million passengers on a network of 1,000+ airports in 159 countries across 3,600+ routes on a fleet of 3,571 aircraft. Last year around 3.5 billion people flew around the world according to IATA, meaning that around 15%-16% of air travellers last year flew on a oneworld member aircraft.

American Airlines is the largest member of oneworld, with the US carrier occupying just over 36% of the alliance’s monthly seat capacity. Its majority in the oneworld alliance has increased during the past 12 months, no doubt given to the airline’s merger with US Airways which was finalised in October last year, with the latter carrier having been a Star Alliance member until 2014. British Airways is the second largest airline in the alliance, with it occupying 9.6% of the alliance’s capacity. It should be noted however that if the totals of LATAM Airlines and LATAM Airlines Brasil were combined, it would be the second largest carrier with nearly 6.6 million seats. 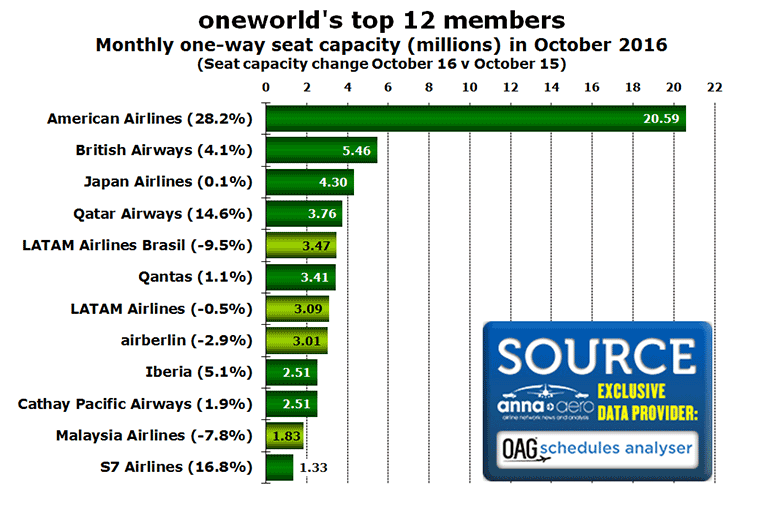 In relation to growth, American is also the alliance’s fastest growing carrier. During the past 12-month period, the carrier’s seat capacity has grown by 28%, again no doubt due to the airline’s merger finalisation with US Airways last October. The significant increase represents a net gain of 4.5 million monthly one-way seats. Along with American, only Qatar Airways (fourth largest airline) and S7 Airlines (12th largest) have welcomed a double-digit increase in seat capacity, with the MEB3 airline reporting a growth in seats of nearly 15% and the Russian airline 17% respectively. Highlighted in light green are the four members of oneworld within the top 12 that are reporting capacity drops when compared to last year.

Outside of the top 12, a further three airlines are members of oneworld (although LATAM Airlines and LATAM Airlines Brasil are technically separate airlines they operate under the same brand). Finnair (13th largest airline) occupies 2.3% of the alliance’s monthly seat capacity, with Finland’s flag carrier reporting a 0.9% drop in seats during the past year. Srilankan Airlines (14th) has 0.8% of the alliance’s capacity, with its seat availability down 3.9%. The carrier to finalise the line-up of oneworld members is Royal Jordanian (15th), with it operating 0.7% of oneworld’s monthly departing seats. The flag carrier of Jordan has itself witnessed a drop in capacity, with its seat availability down 4.7% when compared to October last year.

Dallas/Fort Worth is number one hub; Charlotte Douglas climbs to third

After reporting a rise in seat capacity of 3.8% during the past 12 months, Dallas/Fort Worth remains the number one hub for oneworld. However, what should be noted is the exceptional growth of Charlotte Douglas. Last October the airport was the alliance’s ninth largest operation, however with American having now fully-merged with US Airways, the airport has climbed to third after a growth of nearly 103%, with the North Carolina hub now passing the two million monthly one-way seat capacity milestone. 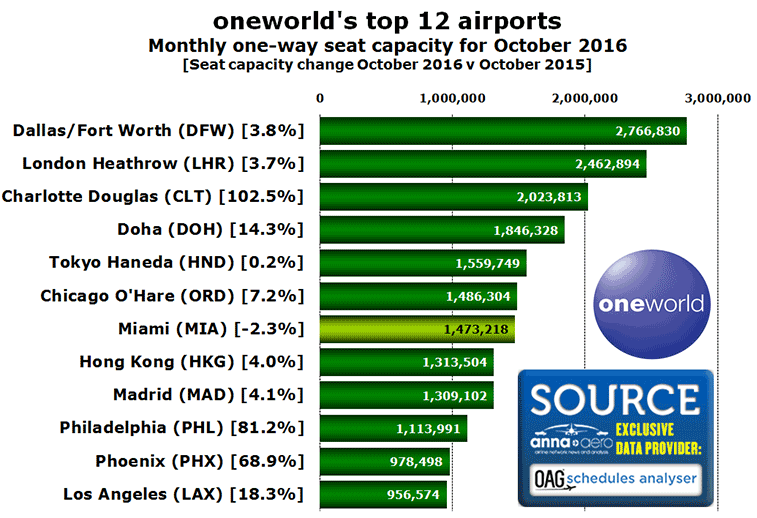 When looking at the alliance’s top 12 routes in relation to ASKs, the number one airport pairing is London Heathrow to Hong Kong, with the city pair welcoming just under 665 million monthly one-way ASKs. The two oneworld member’s that operate the route are Cathay Pacific (10,100 weekly one-way seats) and British Airways (5,300). The third carrier that links the two airports is Virgin Atlantic Airways (1,800). oneworld’s ASKs on the route have dropped by 1.1% over the past 12 months when referring to OAG schedules. 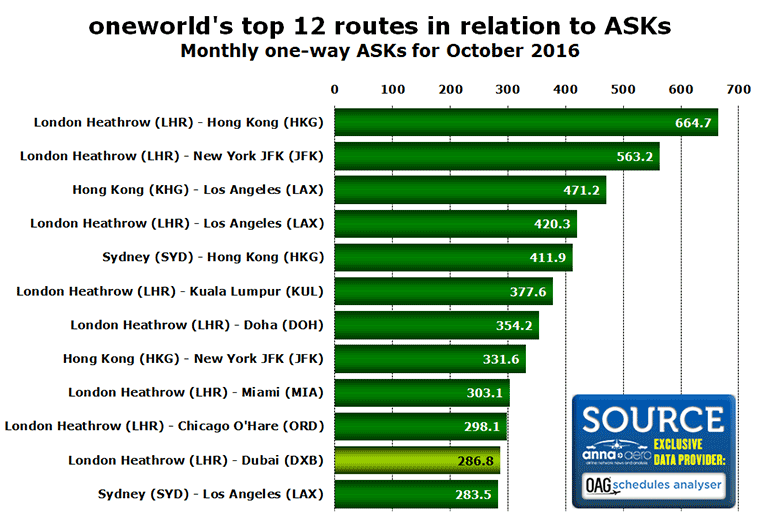 Of oneworld’s top 12 routes in relation to ASKs, only one (highlighted in light green) does not connect two of the alliance’s hubs together, with that being the link between Heathrow and Dubai. It is also not a surprise to note that all of oneworld’s top 12 routes in relation to ASKs are long-haul services, similar to Star Alliance’s results last week. It is not until we come to the 22nd largest route in relation to ASKs that we stumble across a short-haul connection, with that being Japan Airlines’ link between Tokyo Haneda and Okinawa (219 million monthly one-way ASKs). The next short-haul route after that is the regional connection between Hong Kong and Singapore (202 million). 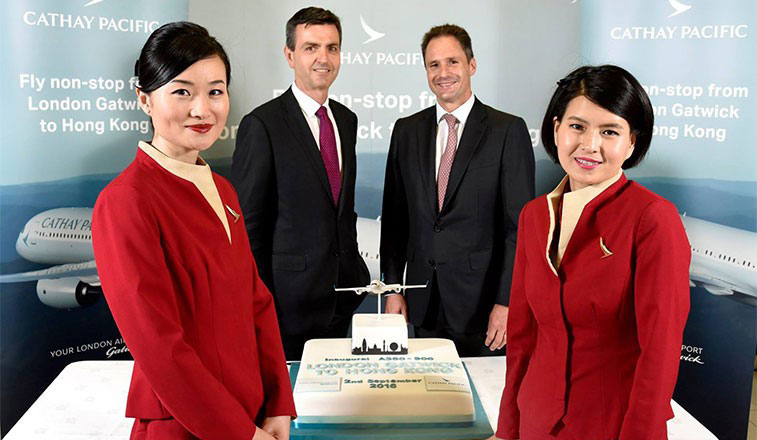 Although Heathrow to Hong Kong is the largest route in the oneworld alliance in relation to ASKs, the city pair welcomed a further boost on 1 September when Cathay Pacific Airways launched non-stop flights between its Hong Kong hub and London Gatwick. Seen celebrating the airline’s arrival at the London airport are Guy Stephenson, CCO of London Gatwick Airport, and Neil Glenn, GM Europe, Cathay Pacific. Hong Kong, oneworld’s eighth largest airport, has seen the alliance grow its seat capacity from the airport by 4.0% during the past 12 months. Gatwick, the alliance’s 32nd largest airport, has seen its capacity with oneworld grow by 9.9% during the same period.

Looking at oneworld’s top 12 routes in relation to seat capacity, one thing that is evident is that nine of them are domestic connections, four of which are in Japan, two in Australia, and one each in Brazil, Peru and Spain. The only connections that are not domestic links are Hong Kong to Taipei Taoyuan (fourth largest oneworld route), Heathrow to New York JFK (11th) and Doha to Dubai (12th).

Last week when we analysed Star Alliance, it had managed to maintain a minimum market share of 31% on its top 12 routes. oneworld has managed to fair slightly better, with its minimum market share being just under 33%, that being on the link between Tokyo Haneda and Sapporo Chitose. What should also be noted is that one of the most lucrative airport pairs in the world – Heathrow to JFK – is the only oneworld route to make it into the alliance’s top 12 routes in relation to ASKs and seats. 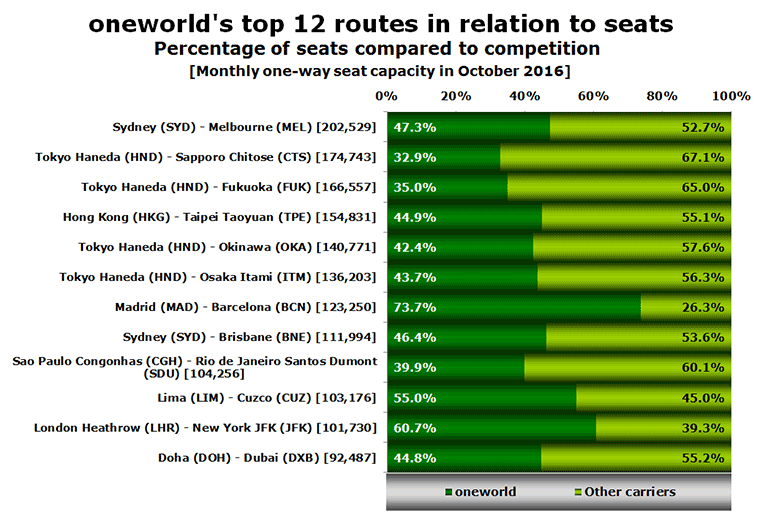 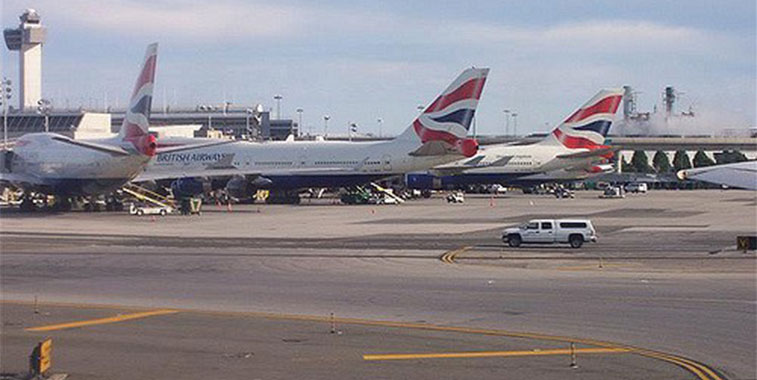 Lots of BA heavy metal at JFK – could Heathrow to JFK be oneworld’s most lucrative route? It is the only airport pairing to be visible in the alliance’s top 12 routes in relation to ASKs and seats. British Airways and American Airlines combined currently offer 12 daily flights between the two airports. Further connectivity with the alliance between the two cities comes in the form of BA’s connections to JFK from London City and London Gatwick, while Heathrow is also connected to New York Newark by Britain’s flag carrier.