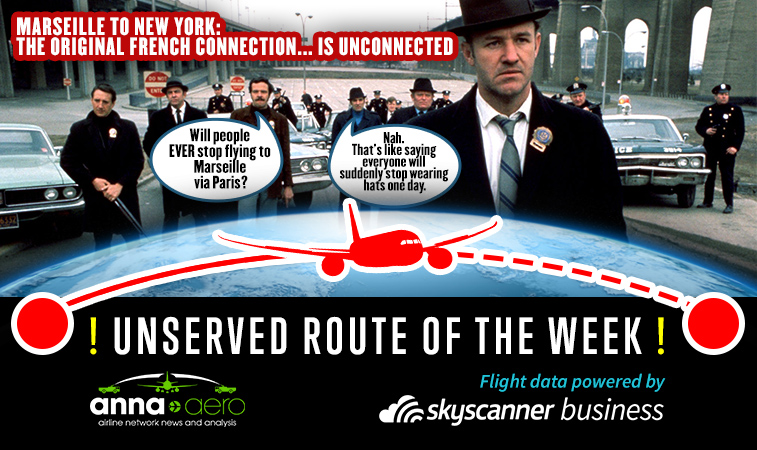 Gene Hackman electrifies the 1971 movie classic: In French Connection 2 he flies to Marseille to chase the baddie who incredibly escapes from this ambush. But nearly 50 years later he still wouldn’t be able to catch a direct flight to Marseille, despite the fact that 170,000 searched on Skyscanner for this service last year. Now that is criminal!

The original French Connection is unconnected! With 170,000 searches in the last 12 months, a potential new route from Marseille to New York has been identified as this week’s “Skyscanner for Business-anna.aero “Unserved Route of Week” – an analysis based on aspirational data captured from the Skyscanner.net flight comparison site used by +50 million unique visitors per month. “Marseille is France’s biggest market with no direct link from the US,” says Véronique Lemee-Alexandre, Head of Market Research and Network Development for Marseille Provence Airport. 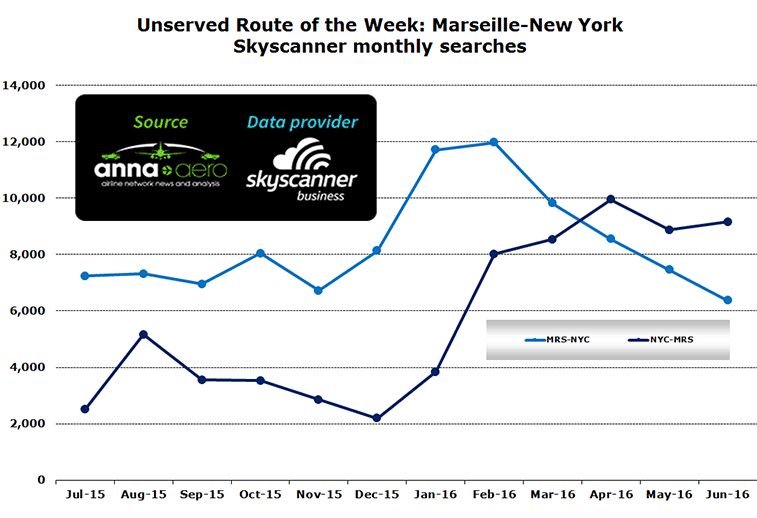 anna.aero urges United or Delta to undertake this route

With the traffic on this route indicating a 60/40 split in favour of Marseille, the potential carriers at the French end of the route were therefore considered first. As expected, the country’s national carrier Air France (and its regional affiliate HOP!) is currently the largest airline with a 33% share at the French airport in terms of weekly seat capacity, according to OAG schedules data for the week commencing 18 October. Air France, a SkyTeam carrier, operates to 11 destinations from Marseille, but only one is international – Amsterdam. Furthermore, despite operating 11 US routes from Paris CDG and Paris Orly, including the recently launched (in June) service to New York JFK (from Orly), Air France presently has no routes from any French regional airport to the US whatsoever! So it is pretty unlikely to change its strategy to start a New York service from Marseille, perhaps preferring to leave this route to its (slightly) more adventurous SkyTeam partner Delta Air Lines, which does at least offer a six times weekly service to Nice from JFK.

Contemplating the US end of the route, Delta is the #1 carrier in terms of transatlantic seats to Europe from JFK, operating 20 routes, and offering nearly 35,000 weekly seats. Given its close ties with home carrier Air France, and its strong market presence, the world’s second biggest airline in terms of weekly seats would seem to be the most appropriate operator of a potential JFK-Marseille airport pair. oneworld’s American Airlines, the #2 US carrier on transatlantic services from JFK, operates 11 routes and offers over 22,000 weekly seats from the New York airport, including a CDG service, but interestingly it also has no sectors to any regional destination in France.

Looking at potential operators at New York’s other main international gateway, Newark, United Airlines is the biggest carrier in terms of weekly capacity, providing the New Jersey airport with 68% of its seats. The Star Alliance airline is also the most significant operator in the transatlantic market from Newark, offering 30 airport pairs and over 70,000 weekly seats. However, once again United is guilty, like American, of only operating to Paris, flying 25 weekly frequencies to CDG (second only in terms of weekly capacity to London Heathrow), and daily to Orly. Compare this to its UK presence, which may be influenced in some part by a slightly shorter sector length, where United flies to five regional points (Glasgow, Edinburgh, Manchester, Birmingham and Belfast International) or Germany where it operates to Munich, Hamburg, Berlin Tegel and Düsseldorf as well as Frankfurt. It should be noted that Delta does also fly from Newark to France, with a daily sector to CDG.

“While the outbound traffic ex-Marseille still accounts for 62% of total traffic, inbound traffic is rising each year. The main engine for US visitor growth to Marseille is cruise activity on both the Mediterranean and the Rhone, with great potential for high-end customers!” enthuses Lemee-Alexandre.

When looking at the previous year of search data, the busiest month for potential traffic flows (for both directions on the route combined) is February 2016, with nearly 20,000 searches, over 10,000 higher than the lowest monthly figure, which was recorded in November 2015 (9,500). The seasonality profile of this search data is less extreme than the last Unserved Route of the Week (Tampa to Salt Lake) with the low-month traffic representing 48% of the highest month. According to OAG Traffic Analyser, because there is no direct service, the top three connecting options chosen by those passengers who did book travel between Marseille and New York in the past year indicates that the majority of connecting passengers use CDG (26%), Heathrow (24%), and Amsterdam (10%). Interestingly, 25 different airports have been used by potential passengers as transfer points to get between the two cities.

An O&D that is not served by a non-stop flight will typically display a low purchase rate and low traffic. In this instance Skyscanner’s Travel Insight indicates a monthly average of 4.4% for the Marseille to New York route (see graph below). Therefore, if there was a Marseille to New York route, and if bookings performed in line with the “Skyscanner market average” for direct services at both airports (5.5%), the airline operating this route could immediately expect an improved purchase rate of 25%, without any increased marketing spend. However, with nearly 170,000 annual searches, the potential city pair operated at a daily frequency should already be very sustainable. 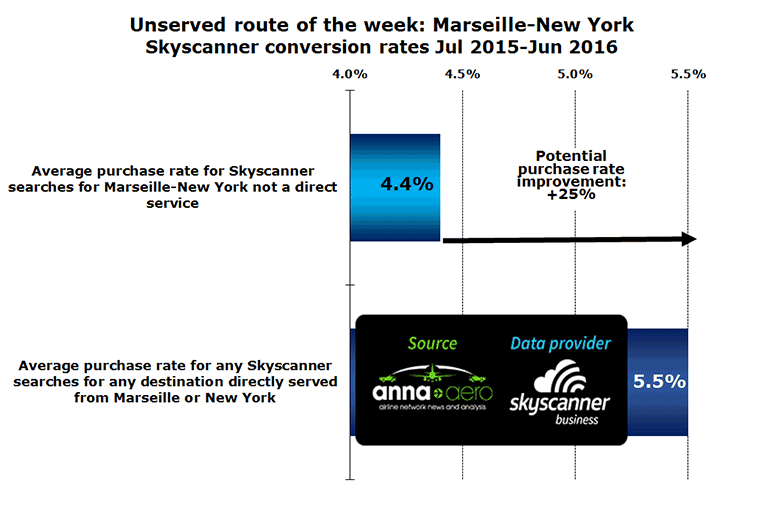