British Airways announces US destination #23 – New Orleans; anna.aero: “We told you it was coming!”

anna.aero’s data elves are big fans of New Orleans. Why you may ask? Because not only does the airport celebrate route launches, but also route announcements. For the news of British Airways commencing flights from London Heathrow in March, the airport commissioned this Big Ben-themed culinary masterpiece, baked by the Sweet Life Bakery in New Orleans. Celebrating the news with the cake are: Ti Martin, New Orleans Aviation Board (NOAB) Member; Simon Brooks, SVP British Airways; City of New Orleans Mayor, Mitch Landrieu; Cheryl Teamer, NOAB Chairwoman; Jim Hudson, NOAB Board Member; and Roger Ogden, NOAB Board Member.

On 20 October British Airways announced its 23rd destination in the US – New Orleans. The carrier will launch flights between London Heathrow and the Louisiana city in March. The city pairing will operate four times weekly on the carrier’s 787-8 fleet. BA last served New Orleans in 1982, when it operated between May 1981 and October 1982 a thrice-weekly London Gatwick – New Orleans – Mexico City link. Speaking at the announcement of flights from Heathrow, New Orleans Mayor Mitch Landrieu said: “For years, we have pursued bringing more direct international flights to Armstrong Airport and with the addition of BA it’s clear our hard work is paying off. Now, travelling from London to New Orleans and likewise from New Orleans abroad will be more economical and save time, unleashing new economic ties and cultural exchanges for our region’s businesses.”

Now, way back in 2014, anna.aero’s data elves placed New Orleans as a strong contender to be BA’s next US destination. Although the carrier chose to launch San Jose in 2015 – a route we also established must have been high-up on the carrier’s list – New Orleans has finally been announced. Although BA will connect to Heathrow, this is not the only service to New Orleans from Europe that will be launched next summer, as Condor will add flights from Frankfurt on 3 May. BA is currently the stronger of the two airlines looking at current schedules. Condor is poised to offer a twice-weekly 767-300 rotation from Frankfurt, which will mean the German carrier will only be offering 60% of BA’s capacity to New Orleans next summer based on current aircraft configurations.

Looking at traffic demand statistics, most passengers travelling between the two cities last year originated from New Orleans, around 54/46 split in favour of the Louisiana State airport. As can be seen from the graph below, the passenger originating split between the two cities has been pretty consistent over the past few years, even with the increasing demand. 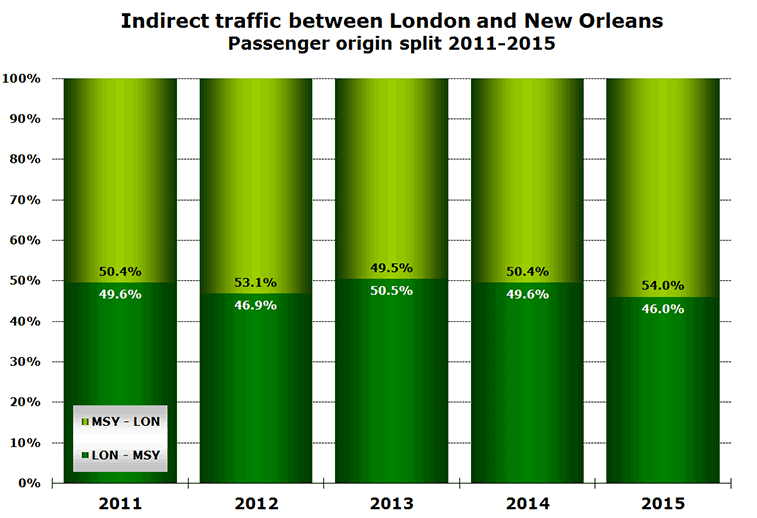 Looking further into OAG Traffic Analyser data, between September 2015 and August 2016 the UK provided 56,600 passengers travelling indirectly to New Orleans. This means that around 31% of traffic in the UK travelled to and from the party city from an airport outside of London. However, it is not just the UK market which will benefit from BA’s new link, but the rest of Europe as well. 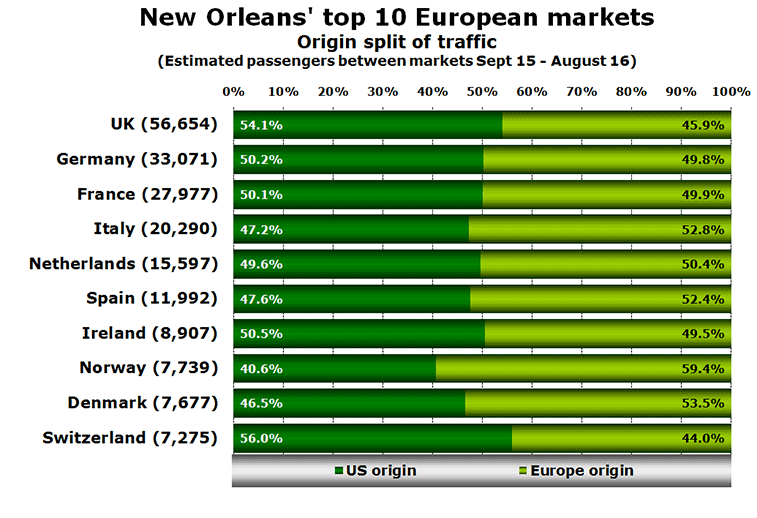 As can be seen from the graph above, there is a strong movement of people between New Orleans and Europe, with an estimated 300,000 trips taking place in the 12-month period analysed. Currently the number one connection point between New Orleans and Europe is Atlanta (20% of connecting traffic), followed by New York Newark (11%) and New York JFK (10%). With such a large market between the two points, BA is well-placed to take a strong share of this demand. 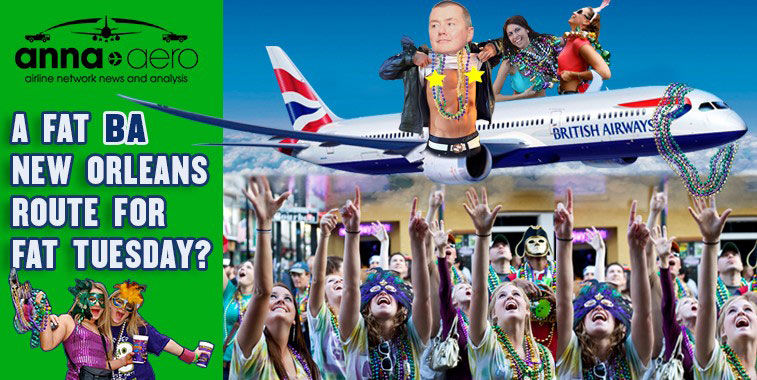 We told you it was coming! Back in S14, we predicted that British Airways’ next new route to the US would be to New Orleans. Although the carrier ended up announcing flights to San Jose first (which we also predicted would be high-up on the oneworld member’s priority list), we knew that New Orleans would be launched at some point. Well done us!!