On 17 September Lviv Airport celebrated the launch of Belavia’s four times weekly service from Minsk. Initially the Belarus-Ukraine route was served with the carrier’s E175s. However, according to OAG data, the route will also be served from time to time by the carrier’s CRJs and 737 fleet. Lviv is on track to handle more than 700,000 passengers this year, an increase of over 20% compared with 2015.

Located just 70 kilometres from the Polish border Lviv is the seventh biggest city in the Ukraine with an urban population of some 760,000 people. Closer to Krakow in Poland (300 kilometres) than it is from the Ukrainian capital of Kiev (500 kilometres), Lviv is served by Lviv Danylo Halytskyi International Airport, named after Prince Daniel of Galicia, the historical founder of the city in the thirteenth century. Passenger numbers at the airport have had their ups and downs in recent years but 2016 looks set to be a record year with anna.aero predicting over 700,000 passengers. 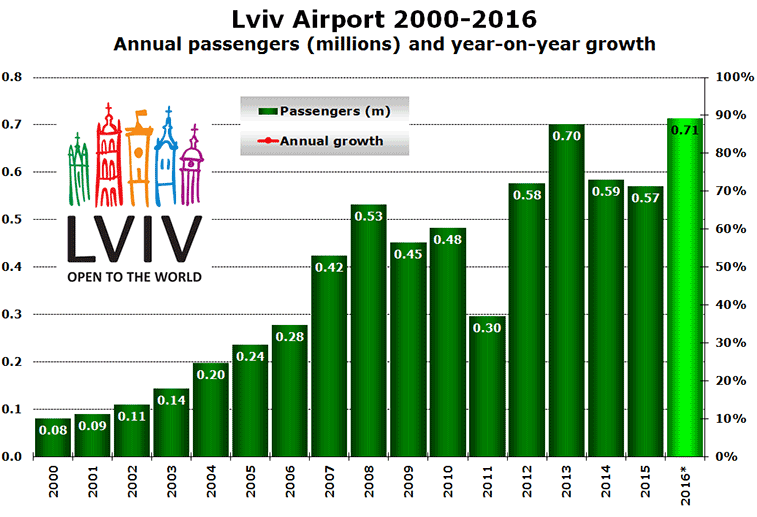 30% growth this summer at Lviv

Passenger numbers at Lviv have been on up on average around 30% during the last five months (May to September) and for the first nine months of the year are 25% higher than in the same period last year. This suggests that the airport is on track to handle over 700,000 passengers for the first time since 2013. Using 2015 data the airport scores a “poor” 12.15 on anna.aero’s SVID (Seasonal Variation In Demand) calculator, indicating considerable seasonality in demand. 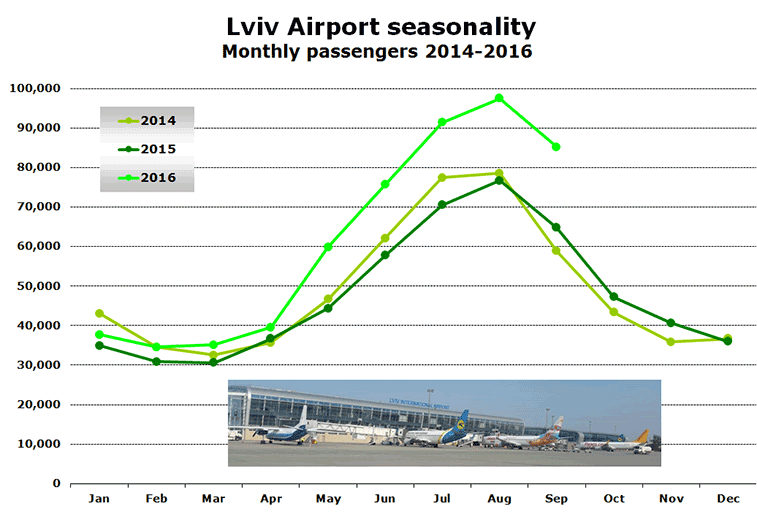 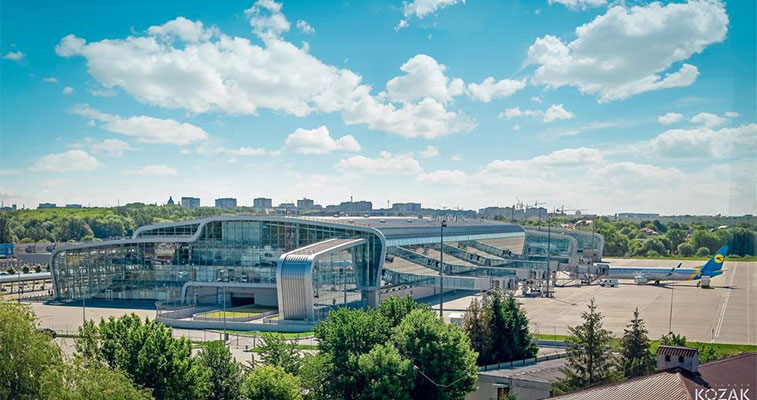 Lviv’s modern terminal was one of several built in Ukraine as part of the preparations for hosting the 2012 UEFA European Championships (jointly with Poland) in 2012. The airport also extended its runway.

The airport’s scheduled network this summer includes links to several European airline hubs such as Munich (with Lufthansa), Vienna (with Austrian Airlines) and Warsaw (with LOT Polish Airlines). However, the hub with the biggest choice of carriers is Istanbul Atatürk which is served not only by Turkish Airlines but also by Ukraine International Airlines and Atlasglobal Ukraine. In addition Pegasus Airlines serves Istanbul Sabiha Gökçen.

The national carrier Ukraine International Airlines serves Kiev’s main airport with up to two daily flights. The airline also operates the longest sector from the airport, the 2,374-kilometre route to Madrid, as well as Bologna and Rome in Italy and Tel Aviv in Israel.

While Pegasus is currently the only LCC serving the airport, Wizz Air’s local subsidiary, Wizz Air Ukraine, once operated non-stop flights to a total of 14 destinations according OAG Schedules Analyser. The three routes flown most often were Dortmund, Venice Treviso and Milan Bergamo.

Speaking to anna.aero during Routes Europe in Krakow earlier this year, Tetyana Romanovska, Director General of the airport, was hopeful that Ryanair might start services from its Warsaw Modlin base to Lviv. With its extensive base there it would operate as a low-cost hub for a wide range of other destinations across Europe.

Since the beginning of the year Lviv has welcomed several new services. In mid-April Ukraine International Airlines started its Istanbul service, while in May Dniproavia began a twice-weekly domestic service on the short 114-kilometre sector to Ivano-Fankivsk. June saw Motor Sich Airlines began a four times weekly domestic service to Kiev Zhulyany using its Antonov AN-140 and also SprintAir start a twice-weekly service from Radom in Poland. In August Belavia arrived with a four times weekly service from Minsk. Most recently Ukraine International Airlines launched a thrice-weekly service to Vilnius, the airport’s only link to Lithuania. Conversely the last 12 months has seen UTair suspend its daily service from Moscow Vnukovo, the airport’s last direct service to the Russian capital. Lviv Airport’s Fire Department has been practicing its water arch salutes this summer on a variety of airlines and aircraft types. The return of Ellinair’s seasonal service from Thessaloniki was graced with an arch of triumph as were Belavia’s new service from Minsk, Motor Sich Airlines’ first flight from Kiev Zhulyany and Ukraine International Airline’s first flight to Vilnius.