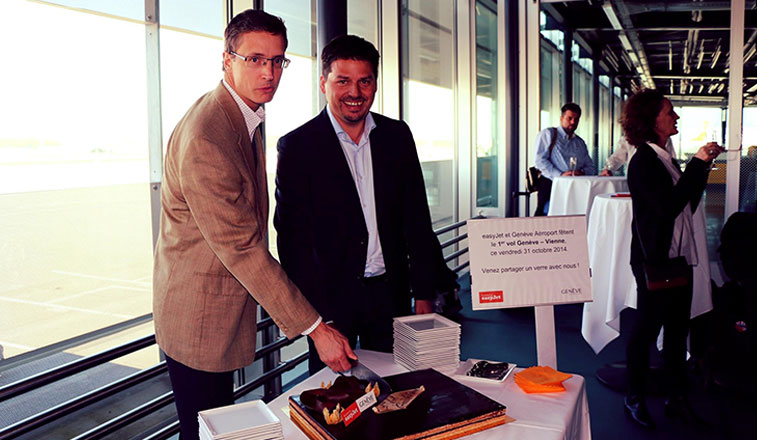 This winter will see easyJet launch new services to four destinations from its Geneva base; Fuerteventura, Inverness, Krakow and Munich. Despite operating over 70 routes from the airport the last route launch celebration at Geneva that we could find in our archives was from October 2014, when the LCC began flying thrice-weekly to Vienna, competing directly with Austrian Airlines.

Since anna.aero last examined easyJet’s base in Geneva back in June 2010 the LCC has further developed its network at the Swiss airport. By the end of this year it will have operated flights to 83 destinations across Europe and North Africa of which 75 were flown during S16 and/or W16/17. In summer Geneva ranks as easyJet’s third biggest base (after London Gatwick and Milan Malpensa) but thanks to its location, close to many popular ski destinations, in winter the airport ranks as the airline’s second busiest, though still only about half the size of the airline’s main base at Gatwick. The popularity of ski traffic can clearly be seen in the following graph which tracks easyJet’s monthly departures from the airport since January 2006. March is the peak month for easyJet’s operations in Geneva with November the quietest month. 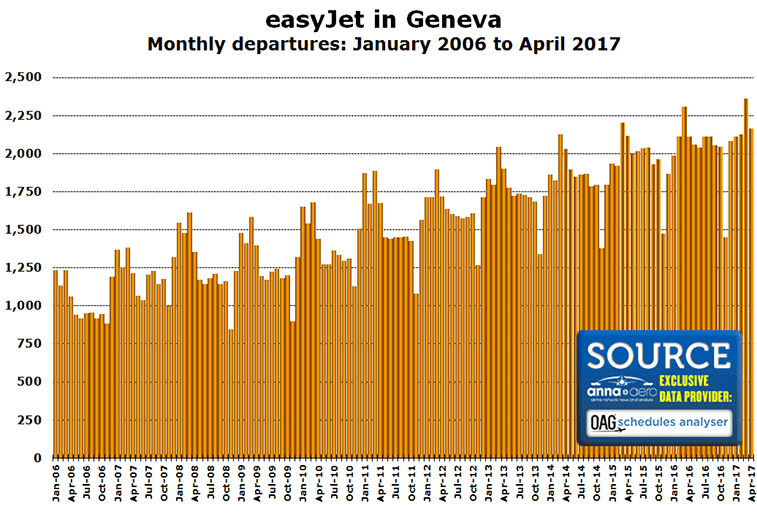 Looking at annual seat capacity for the period 2006 to 2016 shows that easyJet has grown its share from around 28% in 2006 to 38% in 2015 and 2016. During the same period SWISS’ share of the market has fluctuated between 13% and 16%. Air France, British Airways and Lufthansa have all seen their share of the market fall by at least three percentage points during the last decade. 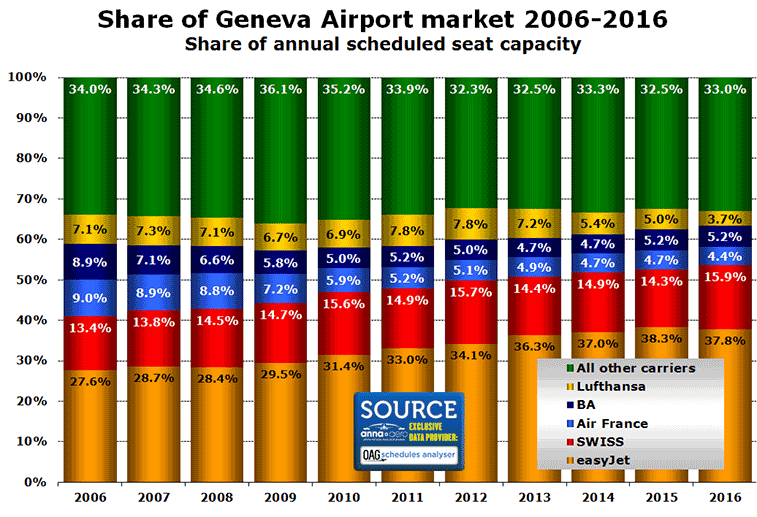 One unusual aspect of the airline’s operation in Geneva is the number of winter only routes flown by the LCC. During the summer season the leading country markets are the UK (20.7% of all seat capacity), France (19.2%) and Spain (18.2%). While the ranking remains the same in winter, the UK’s share of the market now almost doubles to 38.7%, well over twice the market share of the French market (15.3%). This can be explained by the number of winter seasonal operations to UK airports; Aberdeen, Belfast International, Birmingham, Bournemouth, Glasgow, Inverness, Leeds Bradford, London Southend and London Stansted. 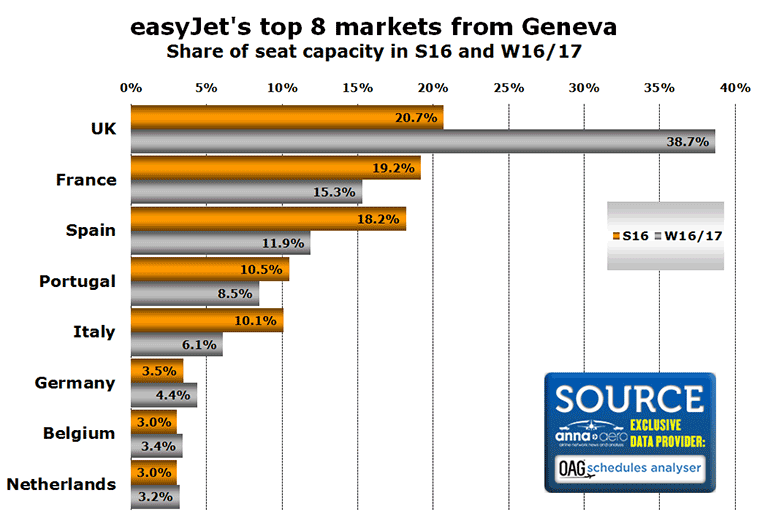 easyJet is still serving 90% of the routes it has ever started from Geneva, an impressively high proportion. Its only route droppings have been Bologna, Rome Ciampino (it moved service to Rome Fiumicino), Doncaster Sheffield, Dortmund, East Midlands, Gran Canaria, Prague and Sharm El-Sheikh.

This year has already seen the addition of new routes to Alghero, Malta and Pisa, while the start of the winter season sees easyJet launch three new routes from Geneva; to Munich (competing with SWISS), Fuerteventura and Krakow, while a weekly service to Inverness will begin on 3 December. 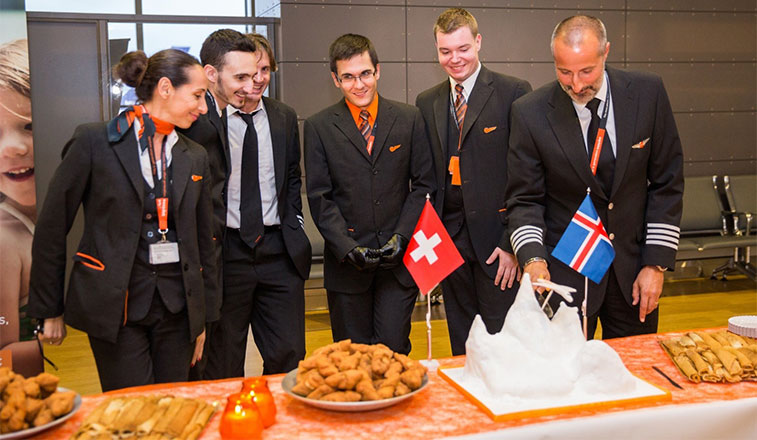 easyJet’s inaugural service between Iceland and Geneva was celebrated on 27 October 2014 at Reykjavik/Keflavik Airport with this very white cake. The route is now served twice-weekly only during the summer season.

London Gatwick is #1 route; SWISS competes on quarter of routes

A significant proportion of easyJet’s routes during the peak summer period are served with at least daily flights. Five routes are served with at least three daily flights. Out of easyJet’s top 15 routes by weekly departures SWISS competes directly on six of them. A third carrier operates on three of these routes (Barcelona, Lisbon and Porto), while KLM competes with easyJet to Amsterdam . In total SWISS provides direct competition on 15 of easyJet’s 61 routes operated during the summer season. 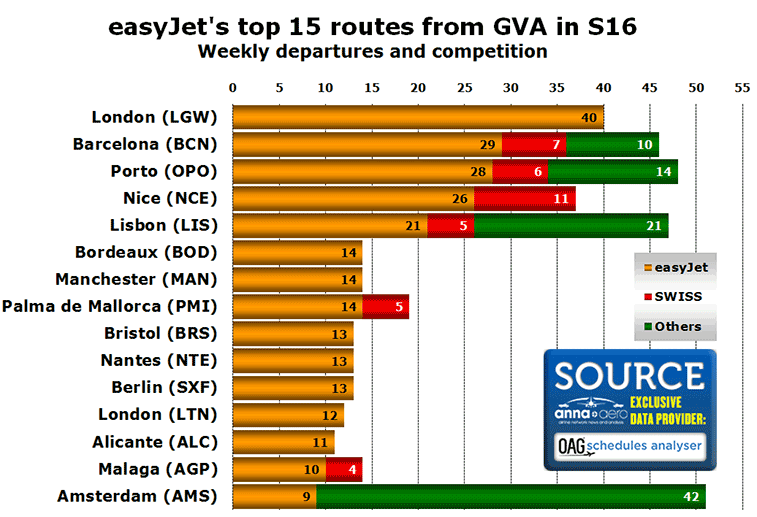 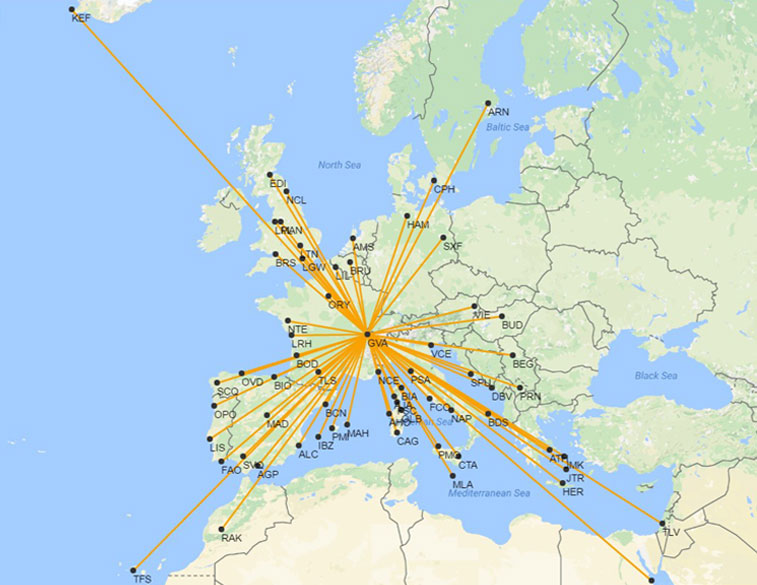 easyJet’s network from Geneva this summer included over 60 destinations from Iceland to Egypt, and from Sweden to the Canary Islands.