Airports in Bulgaria seeing fastest growth for over a decade; Bourgas and Varna up 20% in S16; Ryanair opened Sofia base in September 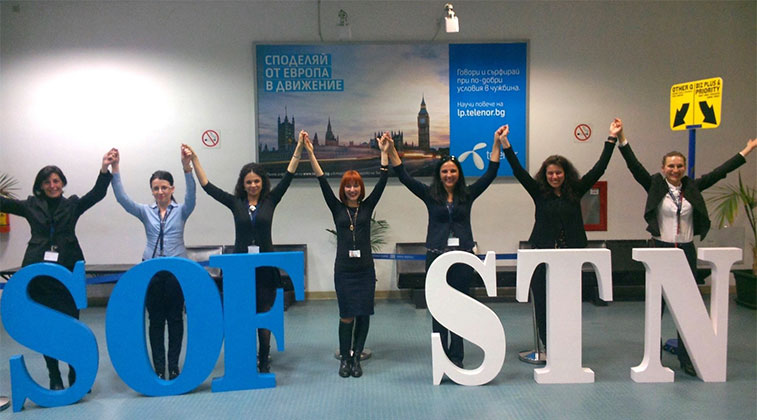 On 25 April 2016 Sofia Airport celebrated the launch of daily services to London Stansted with Ryanair. It was the ULCC’s second route at the airport having started Pisa flights at the beginning of April. In September it launched a further 16 new routes when the Bulgarian airport became the carrier’s 83rd base, with three more routes launching at the start of the W16/17 season.

After relatively unspectacular growth during the last decade, air travel demand from Bulgarian airports has really picked up in 2016. Between 1999 and 2007 passenger numbers trebled from just over two million to over six million across the country’s three main commercial airports at Bourgas, Sofia and Varna. Every year between 2001 and 2007 growth was above 12%. However, since then, only 2011 (+8%) has seen growth of close to 10% while 2009 even saw demand dip by 8%, the first such drop since 1999.

This year though has seen all three airports report impressive growth. Sofia has recorded an increase in passengers of almost 14% in the first eight months of 2016. Given that Ryanair’s 83rd base only opened at the airport in early September it seems likely that growth for the year as a whole is likely to be well above 15%. For the resort destinations of Bourgas and Varna year-to-date growth to September has been even more impressive at 23.3% and 21.0% respectively. All of this means that having handled a record 7.5 million passengers in 2015, anna.aero predicts that total traffic across the three airports is likely to be in excess of nine million in 2016. 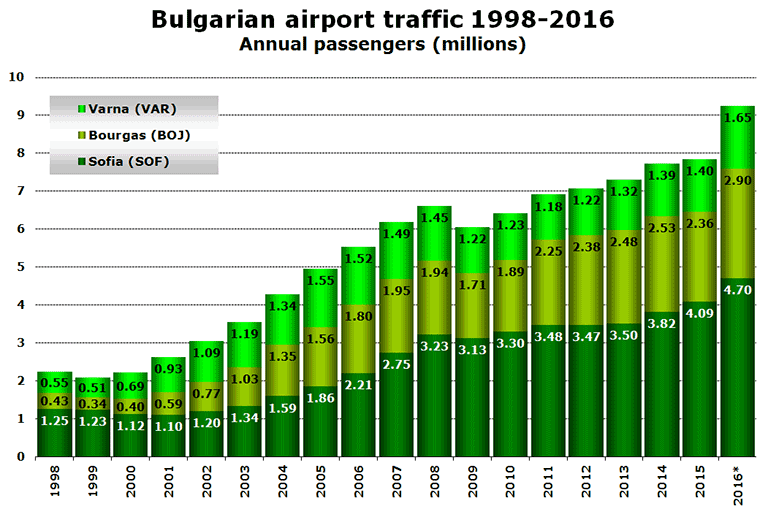 Looking at monthly passenger numbers since the beginning of 2015 clearly shows the impressive growth this year across all three airports. It also reveals that while Sofia’s seasonality is relatively low, Bourgas and Varna have extremely seasonal operations. Using anna.aero’s SVID (Seasonal Variation In Demand) calculator confirms that Sofia scores a “good” 2.21, while Bourgas (216.28) and Varna (126.58) have scores that make one wonder why they bother opening during the winter season. In fact, this winter Bourgas will close for all of November and December, but this is to allow renovation of the taxiways and aprons. 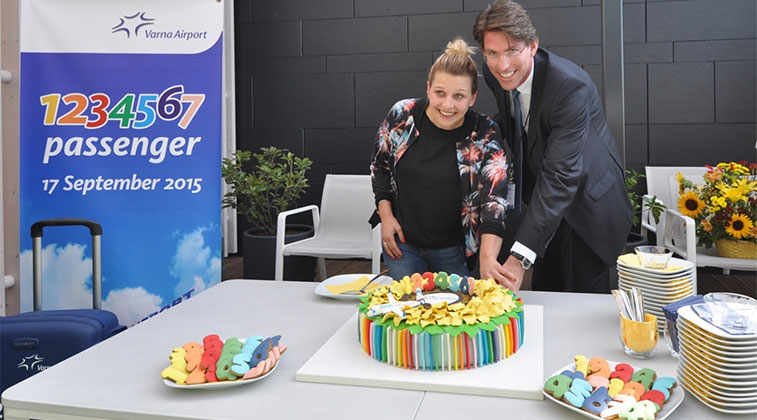 On 17 September 2015 Varna Airport celebrated an unusual numeric milestone, passenger number 1,234,567 for the year. In the first nine months of 2016 Varna’s passenger numbers have been 21% up on the corresponding period in 2015.

Bourgas is so popular during the peak summer season that its monthly passenger numbers in June, July and August exceed those achieved at the airport serving the country’s capital. Both Bourgas and Varna are operated by Fraport Twin Star which will celebrate the 10th anniversary of its partnership at the airports on 10 November. 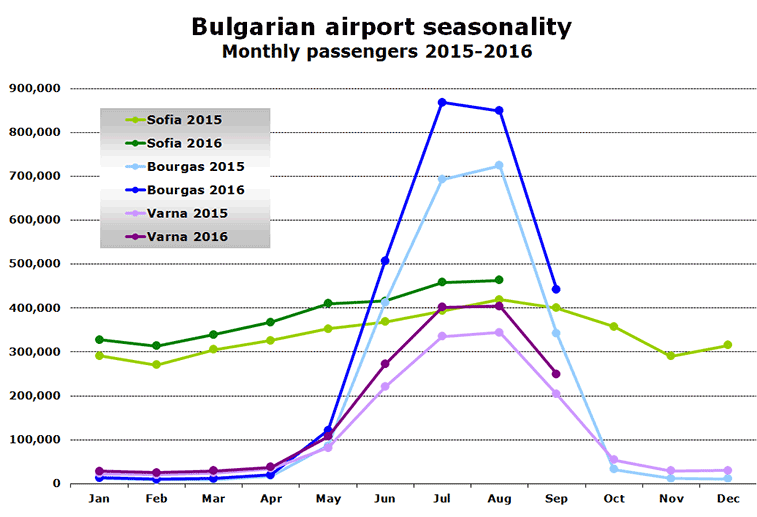 According to a recent Fraport press release, the major tourism source markets driving the growth in 2016 include Russia, Germany, Poland and the UK. In addition, the two airports experienced a 7% increase in the number of airlines and a 16% gain in destinations in 2016. Both of these airports also welcome a significant number of charter flights that are not included in OAG schedule data. 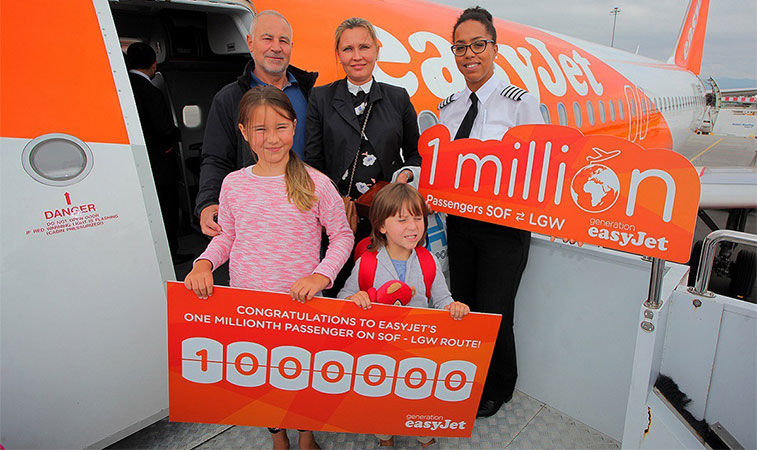 On 23 August easyJet celebrated carrying one million passengers on its route to and from London Gatwick. The LCC started serving the Bulgarian capital in November 2007 and also operates flights from its Manchester base. It will also resume flights from London Stansted from 10 December. In the past it has also served Sofia from Berlin, Madrid and Milan Malpensa.

Bulgaria Air, Ryanair and Wizz Air in three-way fight to be #1 in Sofia

The battle to be the leading airline in Sofia has become more intense with the arrival of Ryanair this year. Looking at schedule data for mid-September (after Ryanair made Sofia its 83rd base) shows that local carrier Bulgaria Air operates the most weekly departures, ahead of Wizz Air and Ryanair. However, in terms of seat capacity Wizz Air leads the way ahead of Bulgaria Air and Ryanair. 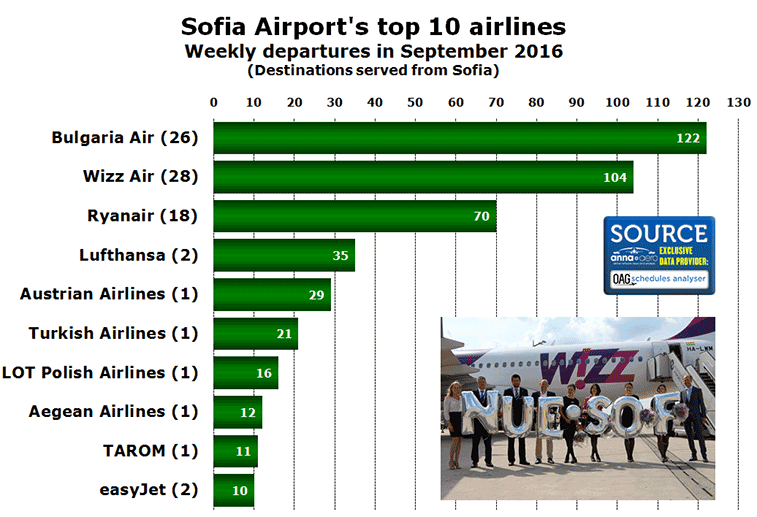 Both of the ULCCs are adding further new routes before the end of the year. Ryanair will add three new routes to Brussels Charleroi, Dublin and Rome Ciampino at the start of the winter season while Wizz Air added Kutaisi in mid-September and will add Basel and Doncaster Sheffield in late December. In addition UK leisure airline Jet2.com will add Sofia to its network with the introduction of flights from Manchester in December. New routes already revealed for 2017 include Wizz Air adding flights to Catania and resuming domestic service to Varna plus Transavia adding a new route from Amsterdam.

Plenty of connections to global hubs

Sofia does not currently have any long-haul services to North America or Asia, but it is connected to several major airline hubs. Many of Europe’s major flag carriers operate at least daily to the Bulgarian capital, though this does not include Iberia, KLM or SAS. Qatar Airways flies daily from its Doha base while Dubai is also served, but not by Emirates. flydubai currently operates thrice-weekly to Dubai’s main airport, while Wizz Air offers twice-weekly flights to Dubai Al Maktoum. Bulgaria Air added three new routes from Sofia during 2016. On 28 April it began flights to Lisbon followed two days later by the start of service to Alicante. On 20 June it added Budapest to its network. In total the carrier served almost 30 destinations with regular scheduled services this summer according to OAG data. The airline’s fleet comprises 10 aircraft; five A320-series aircraft, four E190s and a classic Avro RJ70.