Atlanta-Tel Aviv is “Skyscanner Unserved Route of the Week” with 50,000 annual searches; time for Delta Air Lines to return? 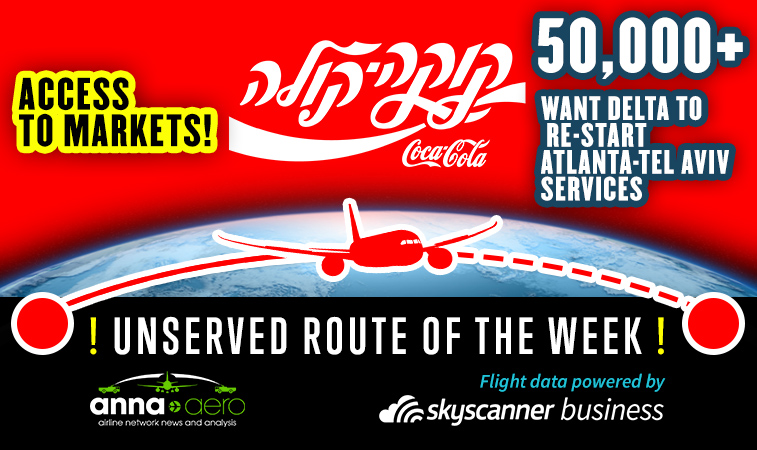 “Open Happiness” – open this route Delta!! In the last year 50,000+ frustrated travellers searched Skscanner for a direct route from the home city of Coca-Cola to Tel Aviv. Delta used to serve this route but dropped the service in 2011 citing high fuel prices. But with 200 feeder opportunities over its massive Atlanta hub, and with this new information from Skyscanner, surely the Skyteam airline has run out of excuses not to re-start the service.

With 50,000 searches in the last year, a potential new route from Atlanta to Tel Aviv has been identified as this week’s “Skyscanner for Business-anna.aero Unserved Route of Week” – a powerful analysis based on aspirational data captured from the Skyscanner.net flight comparison site used by +50 million unique visitors per month. Atlanta, the world’s busiest airport, will also play host to the global network planning community next month, as the 139th IATA Slot Conference hits town between 8-11 November. anna.aero will be all over the event ‒ literally ‒ spreading the news through our well-loved and totally official show daily magazines. 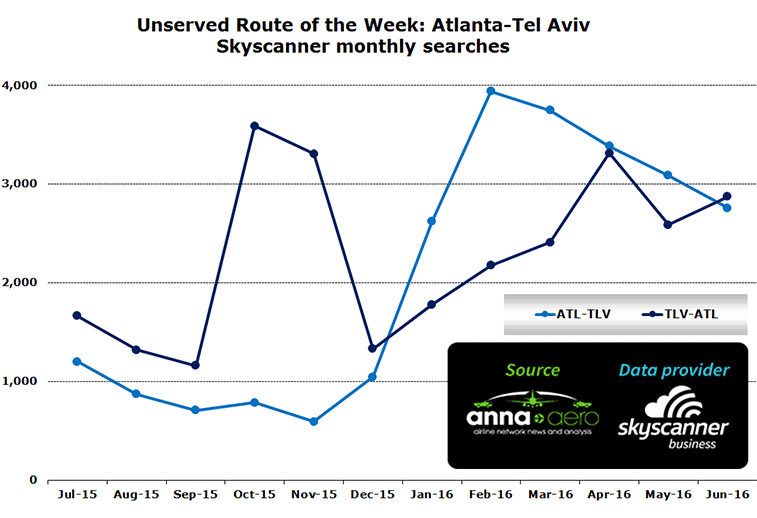 Why anna.aero encourages Delta to re-start this route

With Skyscanner searches on this route illustrating an almost a 50/50 split, but slightly in favour of Tel Aviv, we considered the carriers at the Israeli end of the route first. As anticipated, the country’s national carrier, El Al, is currently the largest airline at Tel Aviv with a 28% share of weekly seat capacity, according to OAG schedules data for the week commencing 20 October. El Al currently operates to 45 airports, including four US destinations, namely New York JFK (13 times weekly), New York Newark (five), Los Angeles (three) and Boston (two). The airline, which is not a member of any alliance, might possibly consider an Atlanta route if it were a SkyTeam member, allowing it to feed the huge Delta Air Lines hub. Instead El Al only has codeshares with JetBlue and American Airlines so, presumably, it is more likely to choose one of their destinations/hubs for any new US routes.

Other potential operators of this route at the Tel Aviv end are very limited. The next largest Israeli carrier, Israir (with 5.9% of weekly seat capacity) tends to only fly to regional points with its A320 and ATR 72 fleet, as does Arkia (3.7% seat share) ‒ its largest aircraft are two 757-300s, which would also not be able to operate the 10,000-kilometre sector.

Contemplating the US end of the route, Delta is the #1 carrier at Atlanta (with an overwhelmingly dominant 78% share), operating over 200 routes and offering nearly 920,000 weekly seats. The founding SkyTeam carrier did fly the route up until August 2011, operating the city pair four-times weekly with 777s. Flagging demand and rising fuel prices were blamed when the Tel Aviv service was dropped along with a long list of other routes from Atlanta: Shanghai Pudong, Athens, Copenhagen, Prague and Moscow Sheremetyevo. However, despite these excuses, and despite less than half price fuel, none of these routes have been reintroduced yet! Perhaps this Skyscanner data could be the last piece of critical data that Delta needs to change its mind (after all it should be noted that Delta does fly daily from New York JFK to Tel Aviv).

When looking at the previous year of Skyscanner search data, the busiest month for potential traffic flows (for both directions on the route combined) is April 2016, with nearly 7,000 searches, nearly 5,000 searches higher than the lowest monthly figure, which was recorded in September 2015 (1,800). The seasonality profile of this search data is more extreme than the last “Skyscanner-anna.aero Unserved Route of the Week” (Marseille to New York) with the low-month traffic representing 28% of the highest month. According to OAG Traffic Analyser, because there is no direct service, the top three connecting options chosen by those passengers who did book travel between Atlanta and Tel Aviv in the past year indicates that the majority of connecting passengers use Newark (28%), JFK (another big Delta hub ‒ 24%) and another Skyteam hub ‒ Paris CDG (11%). Interestingly, when looking at the traffic flows in reverse, while Newark (30%) and JFK (23%) maintain their dominance, the third spot is taken by Philadelphia (14%). This service was operated from Tel Aviv by American Airlines (and previously US Airways) until earlier this year, when it too was terminated.

An O&D that is not served by a non-stop flight will typically display a low purchase rate and low traffic. In this instance Skyscanner’s Travel Insight indicates a monthly average purchase rate/conversion of just 3.4% for the Atlanta to Tel Aviv route (see graph below). Therefore, if there was an Atlanta to Tel Aviv route, and if bookings performed in line with the “Skyscanner market average” for direct services at both airports (5.8%), the airline operating this route could immediately expect an improved purchase rate of 69%, without any increased marketing spend! Therefore, with 50,000 annual searches, if this city pair were operated at a twice- or thrice-weekly frequency, it should be very sustainable. 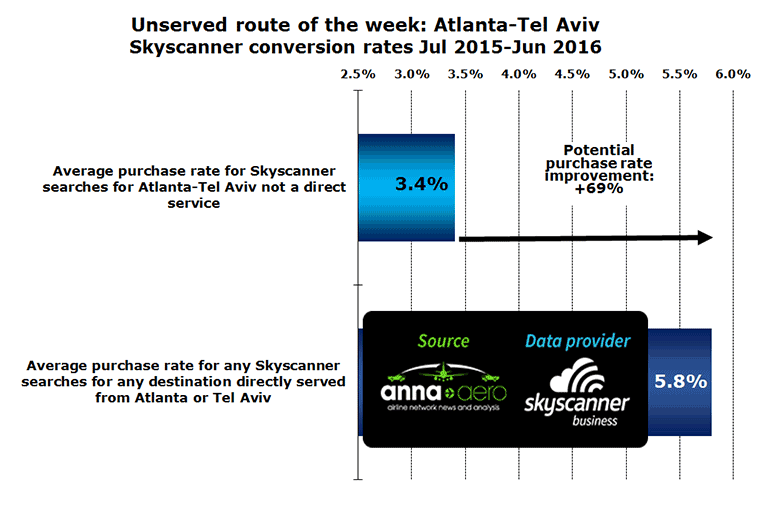