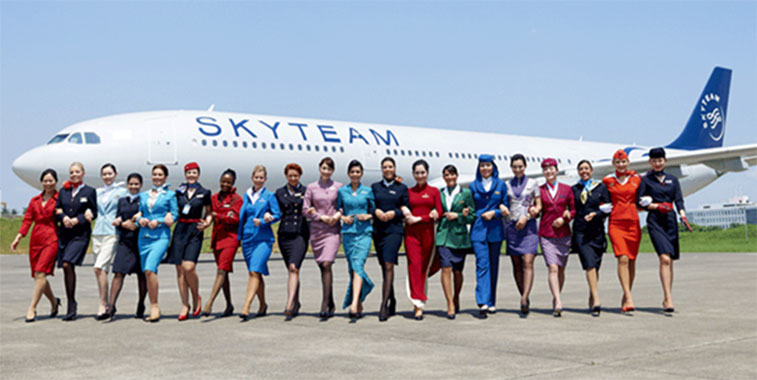 SkyTeam is the last of the world’s three global alliances to be analysed by anna.aero. Founded on 22 June 2000, the four original members of SkyTeam were Aeromexico, Air France, Delta Air Lines and Korean Air. The following April the alliance welcomed its fifth member – Czech Airlines – while Alitalia joined as the sixth member a few months after that. Overall in 2016 SkyTeam is the alliance of choice for 20 of the world’s leading airlines. The alliance last year welcomed 665.4 million passengers on a network of over 1,000 airports in 177 countries featuring more than 3,700 routes. Last year around 3.5 billion people flew around the world according to IATA, meaning that around 19% of passengers in 2015 would have flown on a SkyTeam member aircraft.

Of the 20 airlines that are members of SkyTeam, the largest is Delta, with the US carrier occupying just over 25% of the alliance’s seat capacity. The carrier itself has welcomed a 3.7% rise in seat availability during the past 12 months, which translates to nearly 679,000 additional one-way seats. The second largest airline in the alliance is China Southern Airlines. However to show the dominant lead that Delta has, China Southern’s operation only measures up to 53% of the US airline’s capacity. 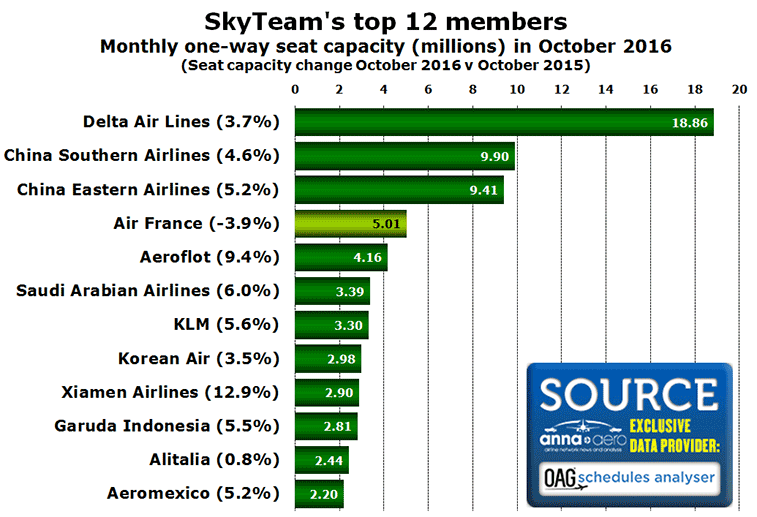 Vietnam Airlines is the 13th largest member of SkyTeam, with it responsible for 2.9% of the alliance’s capacity. The carrier is also leading the charge within the SkyTeam family when it comes to growth, with its seat offering this October increasing by 18% when compared to the same month in 2015. This represents a net increase for the airline in seats of nearly 330,000. Along with Vietnam Airlines, the only other carrier within SkyTeam to register double-digit growth during the past year is Xiamen Airlines (ninth largest airline in SkyTeam), with its seat availability up by nearly 13%, representing a net increase of 330,000 seats. In relation to loss of seats, Air France has fared worst, with it losing just over 200,000 during the past year according to OAG schedules data.

After registering a 3.2% growth in seat capacity from SkyTeam carriers, Atlanta – the world’s largest airport – remains the number one hub for the alliance. Atlanta occupies 5.5% of the alliance’s monthly departing seat capacity. The second largest hub for SkyTeam is Paris CDG (highlighted in light green). However, it is the only airport within the alliance’s top 12 to register a reduction in capacity, with its seat offering down 0.6%. This factor is not helped by the drop in seats by France’s national flag carrier.

The biggest development within the alliance’s top 12 airports is the movement of Guangzhou, with it jumping above Amsterdam to take third place this year. This is as a result of the China Southern hub welcoming an 11% increase in SkyTeam seats. Amsterdam, which also grew during the past year, is home to 26,000 fewer seats then Guangzhou, with the Chinese airport welcoming 190,000 more seats this October than in the same month of 2015. If Guangzhou continues to grow at its current rate, it will pass Paris CDG to claim the title of second largest SkyTeam airport in early 2018. That is based on the trend for Paris CDG also continuing at its current rate. 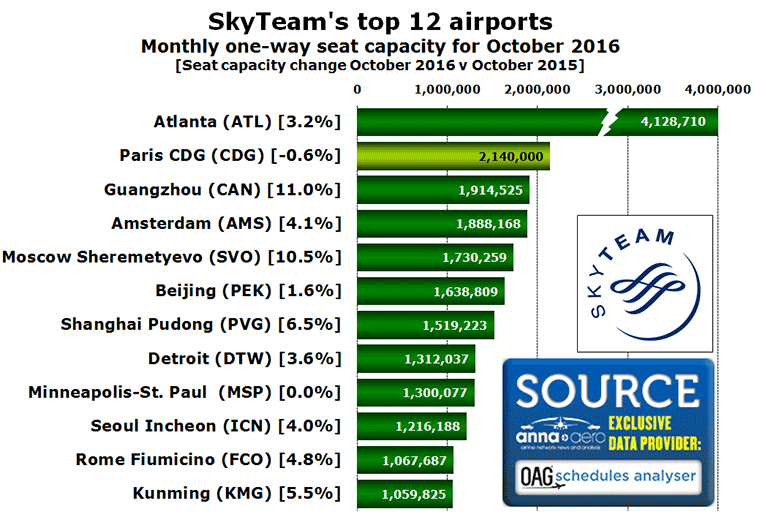 When looking at the alliance’s top 12 routes in relation to ASKs, the number one airport pairing is Paris CDG to Shanghai Pudong, with the city pair welcoming just under 349 million monthly one-way ASKs. The two SkyTeam members that operate this route are Air France (5,164 weekly one-way seats) and China Eastern (3,204). The third carrier that links the two airports is Air China (948) of Star Alliance. SkyTeam’s ASKs on the route have remained constant during the past 12 months. 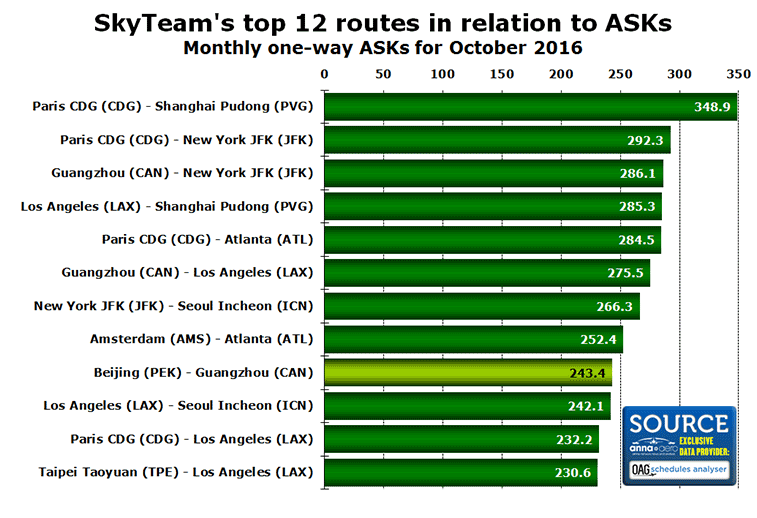 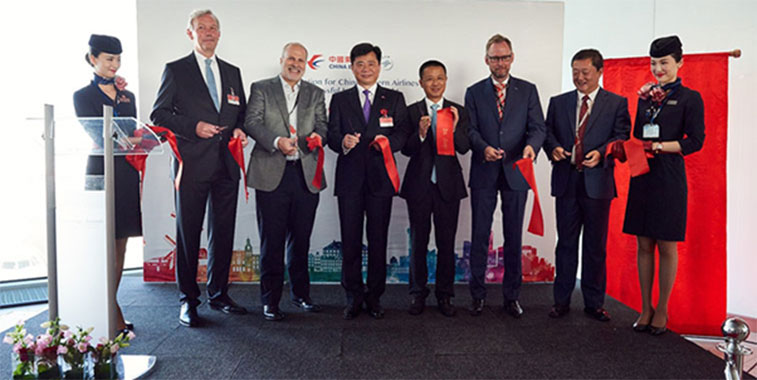 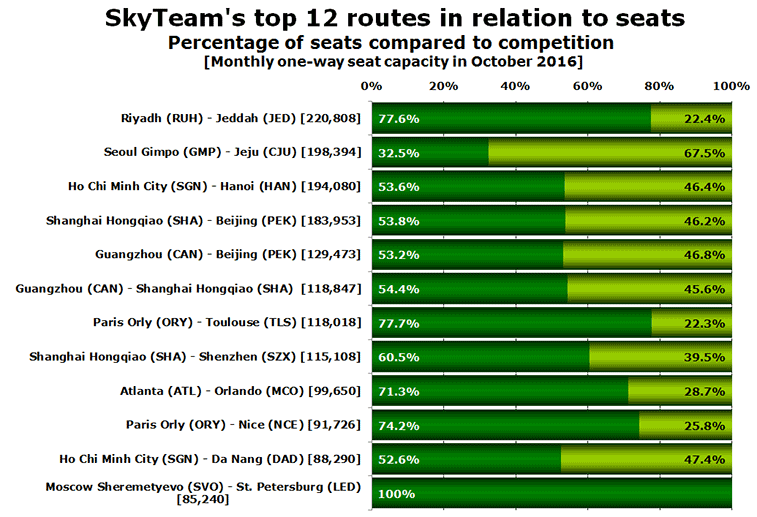 When we looked at Star Alliance recently, it was managing to maintain an average of 31% market share in its top 12 markets, while last week oneworld was reporting a share of 33%. SkyTeam, looking at OAG schedules, is faring much better than its alliance rivals, with its carriers managing a market share average of 63%. The only route that has made it into the top 12 routes in relation to ASKs and seats is the connection between Beijing and Guangzhou. 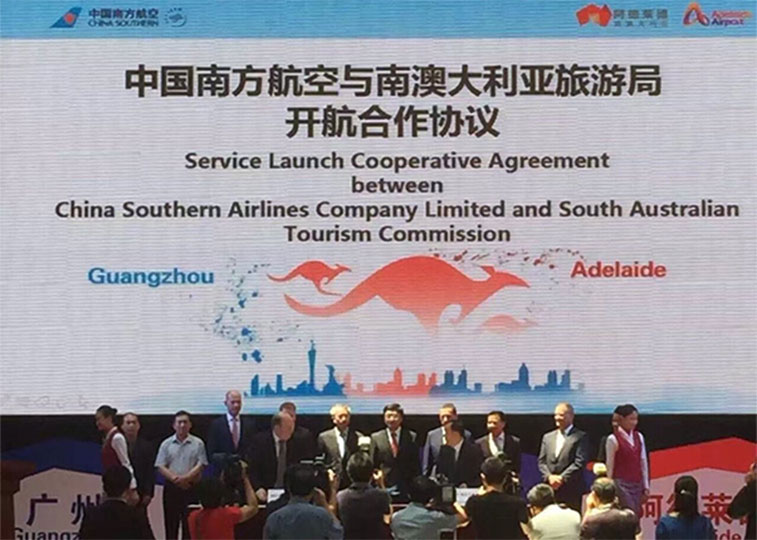 Could this be a route that will help Guangzhou grow to become larger than Paris CDG in the next few years? China Southern will launch flights between the Chinese city, which has welcomed an 11% rise in SkyTeam seat capacity during the past 12 months, and Adelaide in December. If Guangzhou continues to grow at its current rate, it will pass Paris CDG to become SkyTeam’s second largest airport in some time in early 2018. It is also worth noting that these two cities will be the hosts for World Routes in 2018 (Guangzhou) and 2019 (Adelaide).