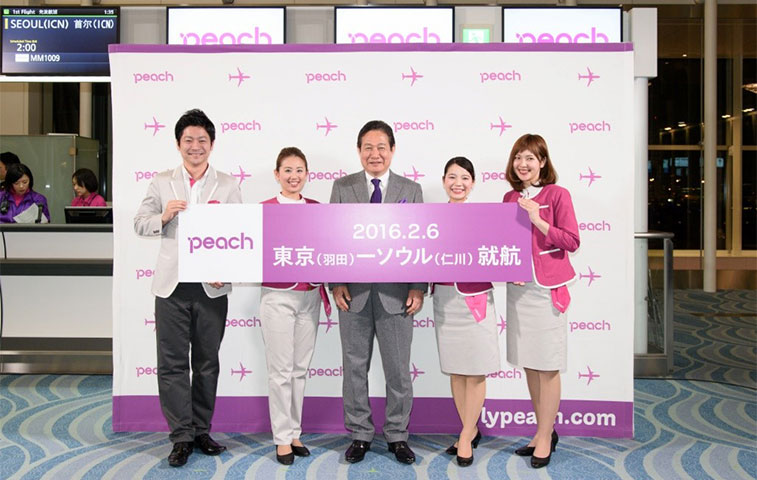 LCCs such as Peach Aviation have been helping to drive the growth in international capacity from Japanese airports in the last five years. Since 2011 the number of seats offered on international routes has grown by 43% while the number of flights has actually risen by 55%.

For the first half of the last decade, between 2006 and 2011, international seat capacity from Japan’s airports remained relatively unchanged at between 36 million and 39 million annual seats. However, since 2011 there has been significant growth with capacity up 43% between 2011 and 2016 to 52.5 million seats this year. The number of flights has grown even more rapidly, by 55%, as the average aircraft size on Japanese international routes has fallen from 270 seats in 2006, to 238 seats in 2011, and 221 seats in 2016. Factors contributing to this growth in capacity (and demand) in recent years include the emergence of LCCs in Japan and the depreciation of the Japanese currency making the country a more affordable tourist destination. According to figures from the Japan National Tourism Organisation (JNTO), overseas residents’ visits to Japan have surged from 6.2 million in 2011 to almost 20 million in 2015. 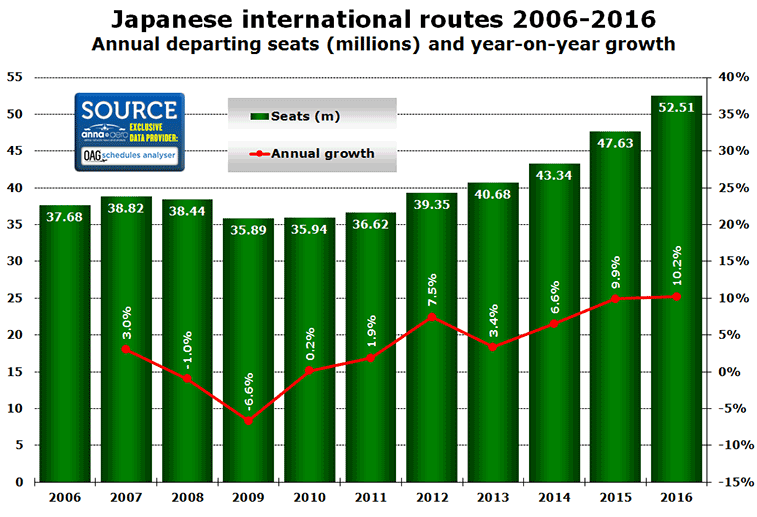 While overall international seat capacity is up just over 10% in 2016, the three leading country markets have each seen their capacity grow by between 15% and 20%. China leads the way in terms of total seat capacity with almost 10 million one-way seats in 2016, an increase of 16% on last year. Both South Korea and Taiwan are narrowing the gap as these two markets both experienced capacity growth of around 20% this summer. These top three markets are not only the biggest but also the fastest-growing among the top 12 markets. 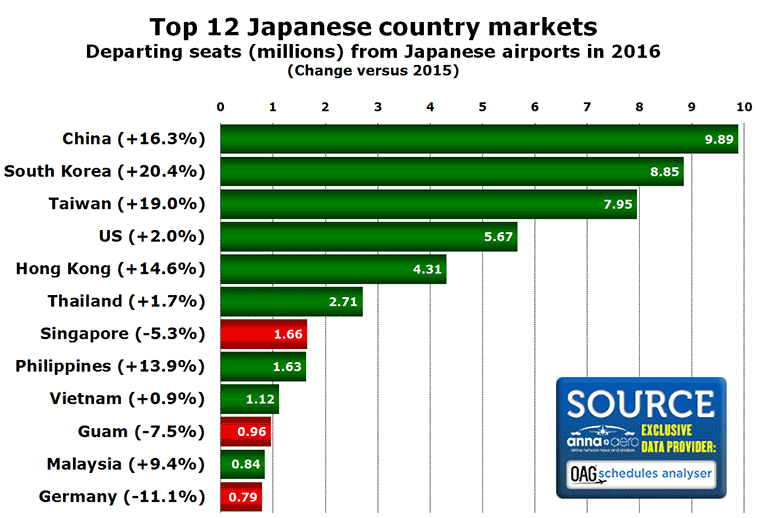 Three of the top 12 markets have seen capacity reductions this year compared with 2015 (shown in red). This includes Germany, the largest European country market. Lufthansa’s decision to cut frequency on its routes from Frankfurt to both Tokyo Narita and Nagoya in 2016 accounts for all of the 11% drop in seat capacity this summer.

Conversely, this week has seen Iberia launch non-stop flights from Madrid to Tokyo Narita, currently the only non-stop link between Spain and Japan while South Korean newcomer Air Seoul has launched five routes to Japan from its Seoul Incheon base since the beginning of October.

An analysis of which airlines provided the most seat capacity on international routes from Japan in 2016 clearly shows the dominance of Japan’s two leading airlines, All Nippon Airways (ANA) and Japan Airlines (JAL). However, comparing annual seat capacity this year with that offered in 2011 reveals how ANA has leapfrogged JAL to be the leading carrier in the international market. During this period JAL was undergoing major restructuring after serious financial difficulties. 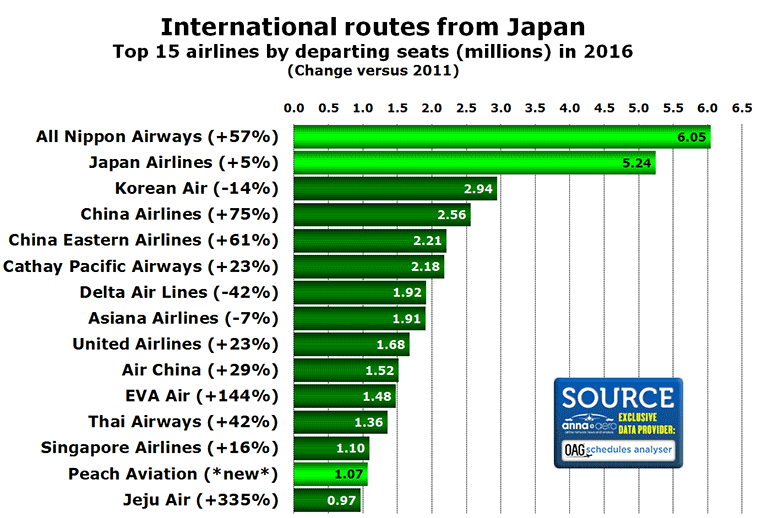 Apart from the two major carriers only one other Japanese carrier (shown in bright green) makes the top 15 airlines and that is Peach Aviation, the LCC in which ANA is a major shareholder, and which only began operations in March 2012. Another LCC, South Korea’s Jeju Air, also just makes the top 15, thanks to fourfold growth in its services to Japan. 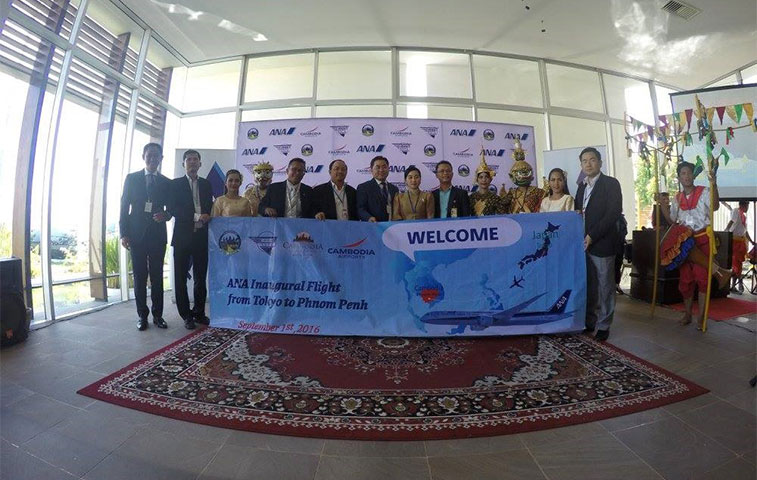 On 1 September ANA began non-stop flights between Tokyo and Phnom Penh in Cambodia. In recent years ANA has overtaken JAL to be the leading airline in terms of international seat capacity from Japanese airports.

A look at exchange rates involving the Japanese Yen since 2011 shows the significant depreciation of the currency. Between the beginning of 2012 and the middle of 2015 the US Dollar went from being worth under 80 Yen to over 120, the Euro went from 100 Yen to almost 140 Yen while the UK Pound went from 120 Yen to almost 200. In addition (but not shown on the following graph), the Chinese Yuan went from 12 Yen to just over 20 Yen. However, since that peak in mid-2015 the exchange rate has fallen back for all the currencies, though they are all still well above 2012 levels with the exception of the plummeting UK Pound which is now virtually back at 2012 levels. 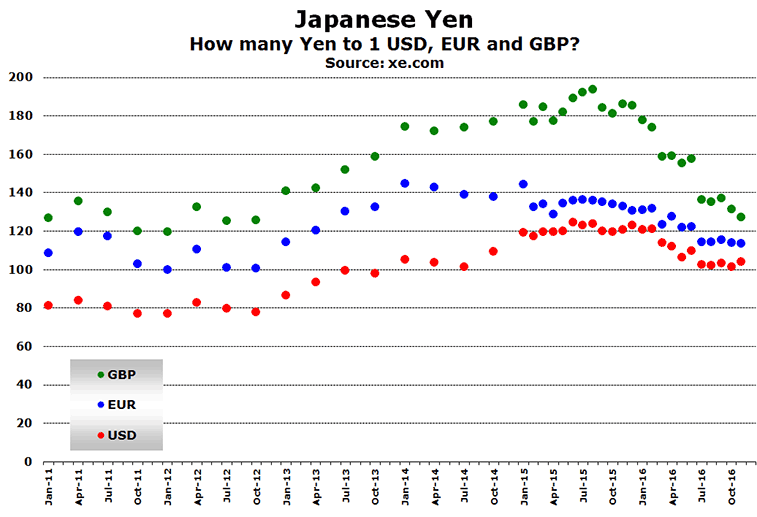