US traffic growing modestly in 2016 so far; domestic capacity down, international up this winter; LCCs continue to lead the way 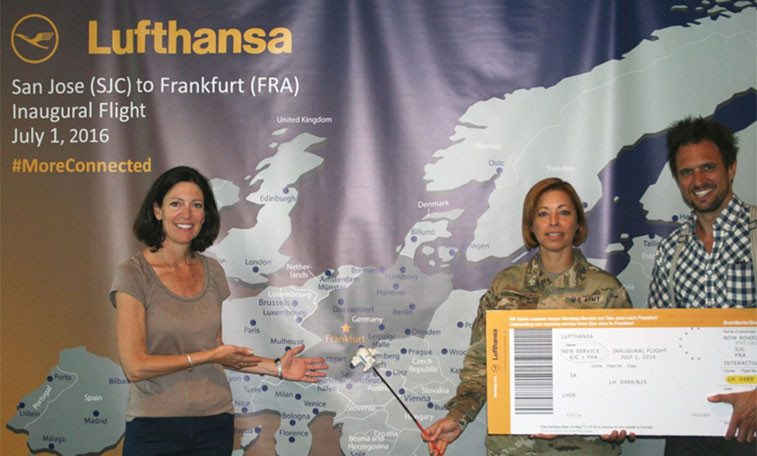 San Jose in California is the fastest-growing this winter among the top 50 airports in the US according to our analysis of OAG schedule data. Capacity at the airport across the W16/17 season is up 10.8% compared with W15/16. New routes launched this summer include Lufthansa’s service from Frankfurt which began on 1 July. British Airways from London Heathrow (in May) and Air China from Shanghai (in September) have also added new international routes to San Jose.

Figures from the US DOT Bureau of Transportation Statistics show that in the first seven months of 2016 scheduled domestic enplanements are up 4.0%. After growth of 4.1% in May and 4.8% in June, domestic traffic grew by a more modest 1.5% in July. That means that domestic traffic has now extended its run of consecutive growth to 29 months, though the most recent figure for July is the lowest monthly growth during that whole period. 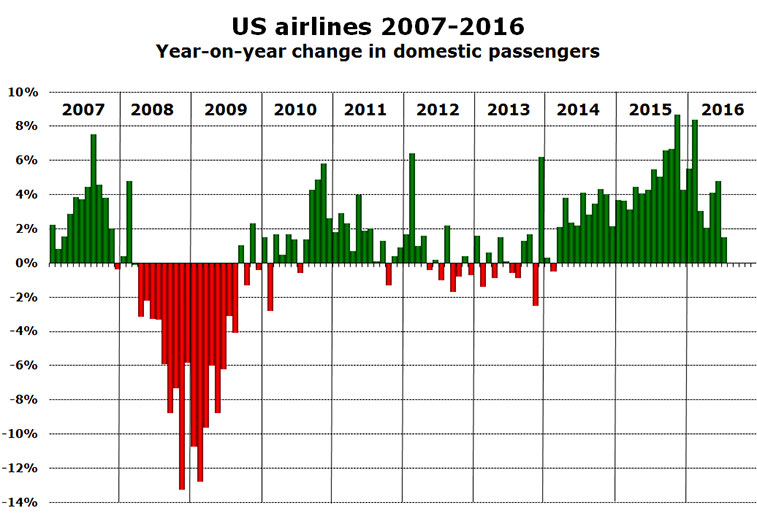 Analysis of OAG schedule data for the recently commenced winter season (W16/17) comparing it with last winter suggests that domestic capacity is currently expected to fall by around 1.2%. The five biggest carriers are currently all showing capacity declines this winter of between less than 1% and just over 4% in the case of American Airlines. The six carriers among the top 12 showing capacity growth this winter are led by Allegiant Air (+14.9%), followed by Sun Country Airlines (+13.4%) and Frontier Airlines (+12.7%). Previously fast-growing Spirit Airlines appears to have curbed its desire for growth and is adding around 700,000 extra seats into the domestic market this winter, representing growth of 7.5%. 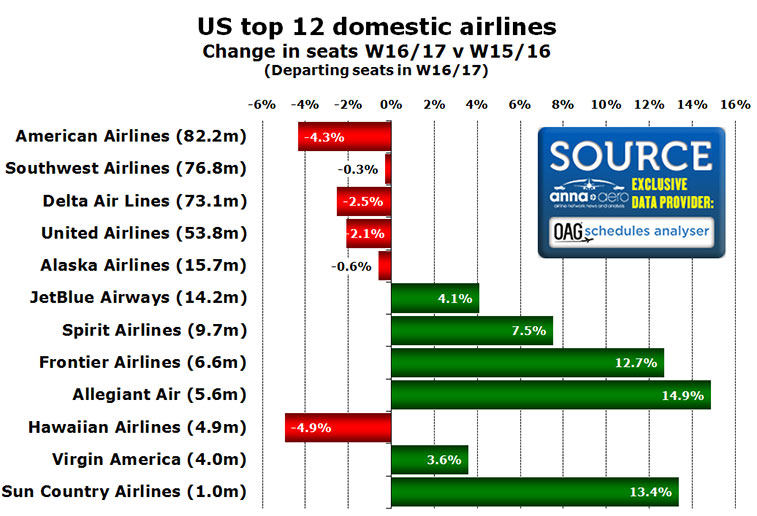 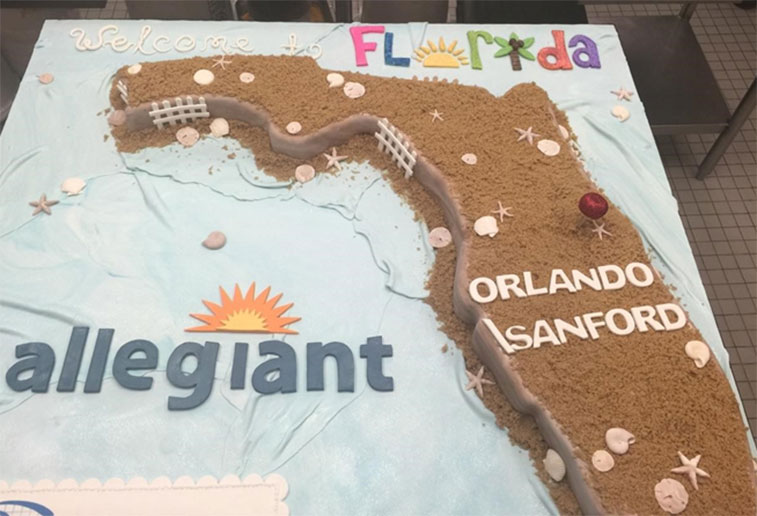 Allegiant Air has continued to grow its domestic network considerably during 2016. This splendid cake was baked to celebrate the start of service from Flint in Michigan to Orlando Sanford in Florida back in April. Allegiant ranks as the 9th biggest airline in the US domestic market this winter, but with just 1.6% of the total market, well behind American Airlines (23.4%), Southwest Airlines (21.9%), Delta Air Lines (20.8%) and United Airlines (15.3%).

International seat capacity up less than 1% this winter

Again, according to US DOT data, in the first seven months of 2016, US carriers have carried 2.8% more passengers on international services than they did in the corresponding period last year. Excluding February (which had an extra day this year), monthly growth rates have varied between just 1.0% in May and 3.7% in March. In June and July growth was 3.0% and 2.4% respectively. With five months of data still to be reported 2016 could become the first year since 2007 when international traffic grows in every month. 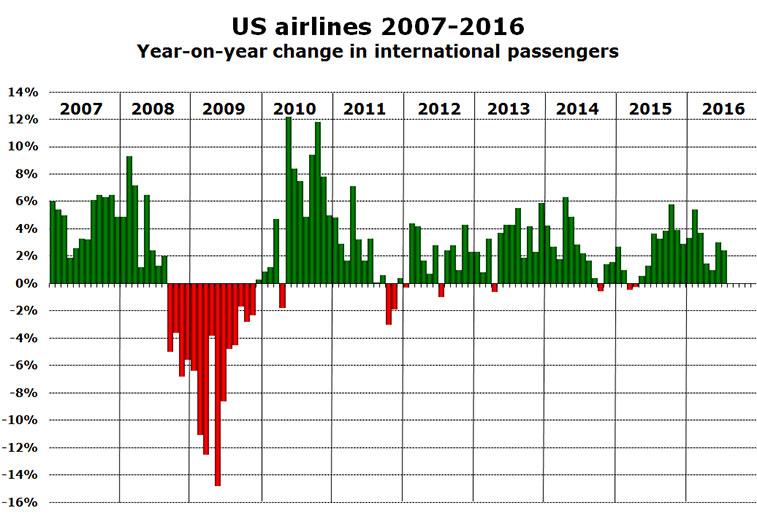 Analysis of OAG schedule data for this winter and comparing it with last winter suggests that international capacity growth across all airlines (not just US ones) will be a very modest 0.7%. The number of flights will actually fall by 0.7% indicating an increase in the average number of seats per flight. Of the top 15 airlines to serve the US market (as measured in seats across the whole winter period), seven are currently showing a reduction in seat capacity. Just two of the top 15 airlines are reporting double-digit growth this winter; Southwest Airlines and Volaris. Air Canada, with an increase in seats of 9.5% is the only other leading carrier to be planning capacity growth of more than 4%. Even Emirates is only currently planning a capacity increase of 3.8% this winter. 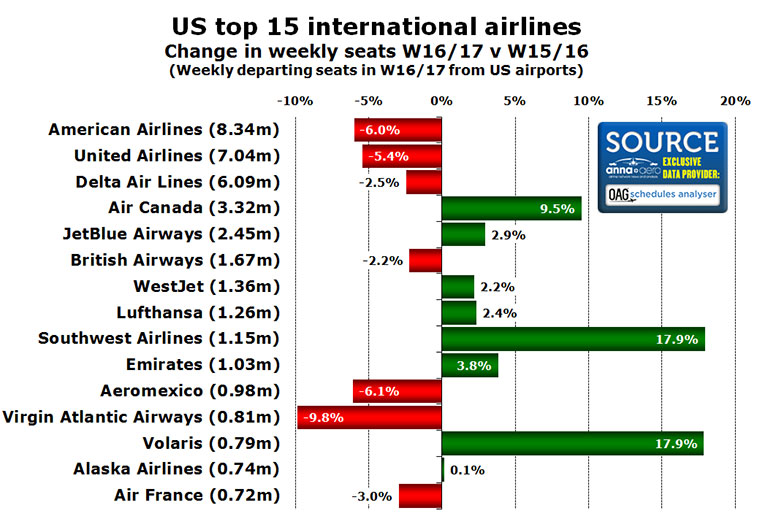 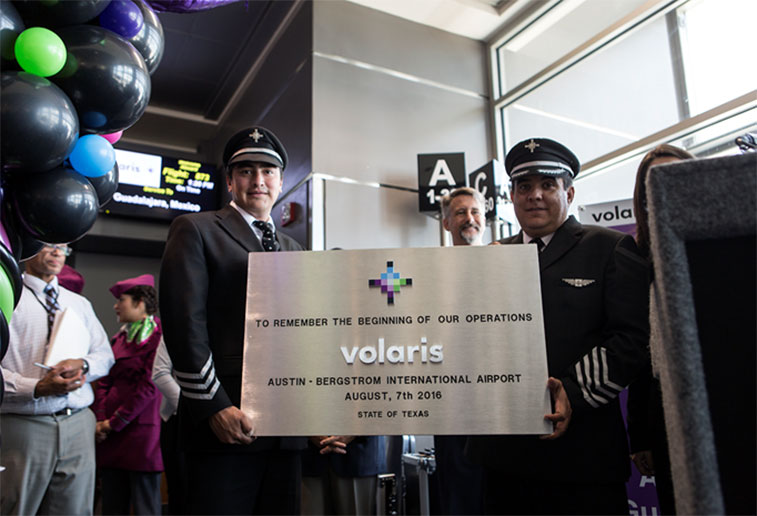 Analysis of schedule data for the top 50 US airports this winter reveals that 31 are expecting to see a reduction in seats offered to passengers across all services (domestic and international). Of the 12 busiest airports just three are seeing capacity growth this winter, led by Los Angeles (+2.8%), and followed by Denver (+2.4%) and San Francisco (+1.2%). In total across the top 50 airports just four are set to experience capacity growth of more than 5%, led by San Jose (+10.8%) ahead of Nashville (+7.8%), St. Louis (+7.2%) and Fort Lauderdale (+6.3%). The world’s busiest airport at Atlanta is currently showing a 2.8% reduction in winter capacity. 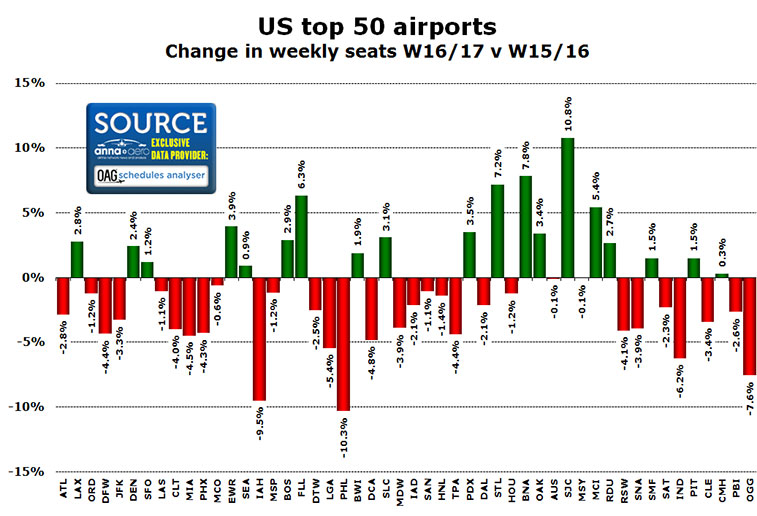