On 9 February, Ryanair announced that Nuremberg would be its latest European base, with the airline initially committed to stationing one 737-800 at the airport from November. With the new aircraft also came four new routes, namely Budapest (daily), Manchester (daily), Milan/Bergamo (daily) and Rome Ciampino (daily). On top of these new routes, the airline also announced that it will increase the frequency of its London Stansted route from daily to twice-daily, while flights to Malta will operate year-round. This means that for the winter season Ryanair will be operating 44 weekly flights from Nuremberg.

On 7 October, nearly a month before the official opening of Ryanair’s base #79, the airline confirmed that for S17 it would station a second 737-800 in Nuremberg, and open a further four routes: Bari (twice-weekly), Madrid (four times weekly), Palermo (twice-weekly) and Porto (twice-weekly). Along with these routes, existing flights to Alicante and Malaga will return for the summer period. This means that so far for S17 Ryanair will be offering 66 weekly flights from Nuremberg. However looking at OAG schedules, there is still a few gaps in the timetable that could accommodate further routes – so watch this space.

During a conversation back in April, at Routes Europe in Krakow, anna.aero’s Assistant Editor Jonathan Ford was kindly invited by Nuremberg Airport’s Head of Aviation Marketing Business Development, Christian Käser, to attend the base opening on 2 November. Of course Ford kindly accepted Käser’s invitation, and just before World Routes in Chengdu, Ford was booked up ready for his flight to Nuremberg. 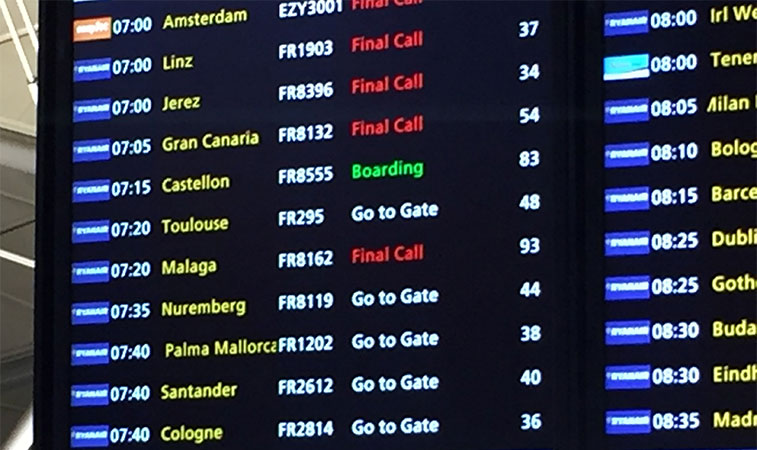 In order for anna.aero’s Assistant Editor to get to Nuremberg, he would have to fly direct with Ryanair from London Stansted. Ford was booked on flight FR8119 on the morning of 1 November, the new early departure to Nuremberg. On 31 October Ryanair increased the frequency of its Stansted – Nuremberg route to twice-daily from the existing daily service. Eager Ryanair followers will also note flight FR295 to Toulouse, the airline’s inaugural flight to the French city from the London airport. On arrival at the airport’s security checkpoint to go airside on 2 November, Ford noticed that on the side of the building was an image of Albrecht Dürer, the famous painter, printmaker, and theorist of the German Renaissance who was from Nuremberg. Along with this image was a lorry that had been placed to advertise Ryanair’s new routes from Nuremberg, namely Budapest, Manchester, Milan/Bergamo and Rome Ciampino along with the carrier’s existing routes to London Stansted and Malta. These are the six routes that will operate from the city year-round. Flights to Alicante and Malaga will be flown summer-only at present. Once all the press had cleared security it was then time to board the bus that would be heading out to the apron to meet the arrival of Ryanair’s based aircraft (that on the day was arriving from Milan/Bergamo – a route which had started two days previous). Amongst those to speak on the bus during a brief press conference was Dr. Michael Hupe, MD Nuremberg Airport. Touchdown. The aircraft that will be based in Nuremberg touched down on the German airport’s Runway 28 from Milan/Bergamo at 11:55, with flight TK1504 waiting to depart for Istanbul Atatürk. Watching as the aircraft taxis in from the runway are Dr. Markus Söder, Bavarian Minister of Finance, and Hupe. Once the aircraft had arrived on stand it was then time for the press call photo. Showcasing Ryanair’s new routes to the press were: Dr. Michael Fraas, Deputy Mayor for Economic Affairs, Nuremberg; Söder; Albrecht Dürer (impersonator); Hupe; and Tim Howe Schröder, Head of Corporate Sales & Senior Marketing Manager, Ryanair. 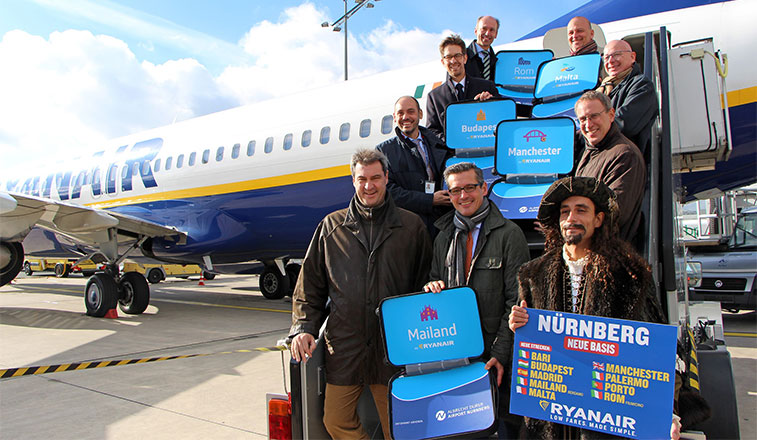 Once the photo call had taken place, there was then a chance for the TV media to get their chance to ask grueling questions to Söder and Hupe about the economic importance and benefits that Ryanair’s based aircraft will bring to the city, and the news of further investment from the airline next year when it adds a second 737-800 for S17. While the media was getting their interviews, anna.aero managed to sneak a photo with part of the team that made Ryanair’s Nuremberg base possible. Joining Jonathan Ford, Assistant Editor of anna.aero, to celebrate Ryanair’s base opening, and highlight S17’s new Bari, Madrid, Palermo and Porto routes are Käser, Howe Schröder and Kohstall. Ford also managed to get a photo along with Albrecht Dürer. 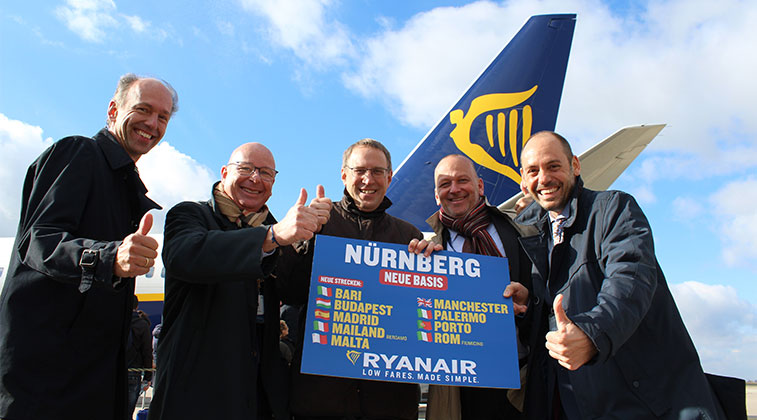 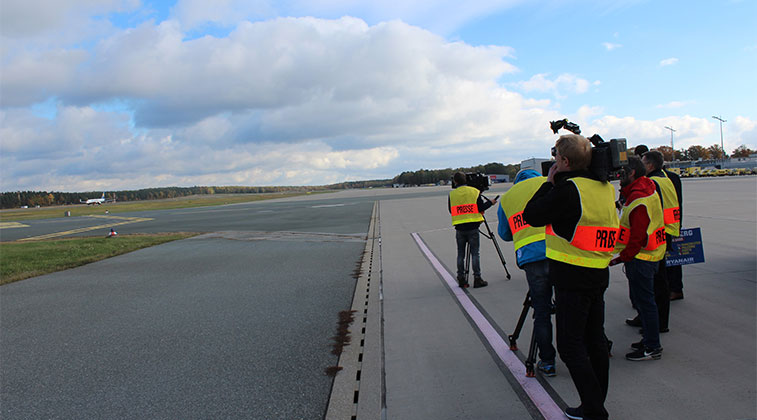 That was quick! Within the space of 15-20 minutes Ryanair had not only managed to get an aircraft turned around, but Nuremberg Airport had successfully managed to achieve a press conference and gathering around the new based aircraft. Once it had pushed back, the press along with the airport team got the bus back out to the end of the apron to catch the flight departure. 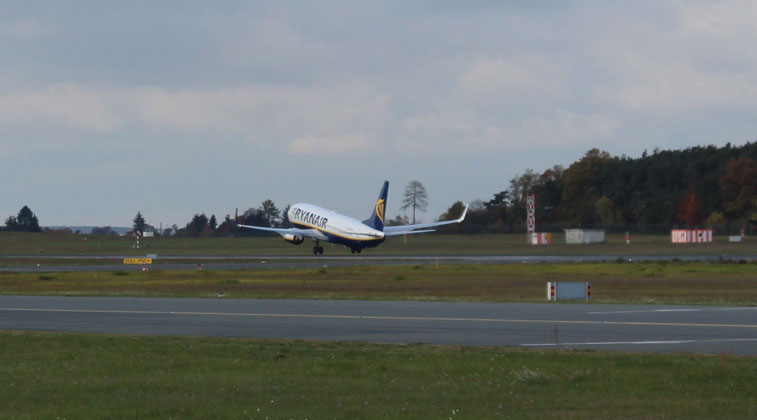 Up and away. The Ryanair flight was off on its way back to Milan/Bergamo. Ford would like to thank Nuremberg Airport and Ryanair for such an efficient and splendid day celebrating the airline’s new base, and in particularly Christian Käser, Head of Aviation Marketing Business Development, Nuremberg Airport, who invited anna.aero’s Assistant Editor to Nuremberg to be part of the day. While on an airport tour later in the afternoon, Ford, Hupe and Käser bumped into two of Ryanair’s new based crew as they were finishing their shift. Emanuele Caregnini, shaking hand with Hupe, was stationed in Alghero before transferring to Nuremberg, while Philipp Mehnert was at Frankfurt Hahn. Visible in the background is Nuremberg’s iconic leaning control tower. While on the tour, Ford and Hupe also manged to get a sneak peek of Ryanair’s new crew room. 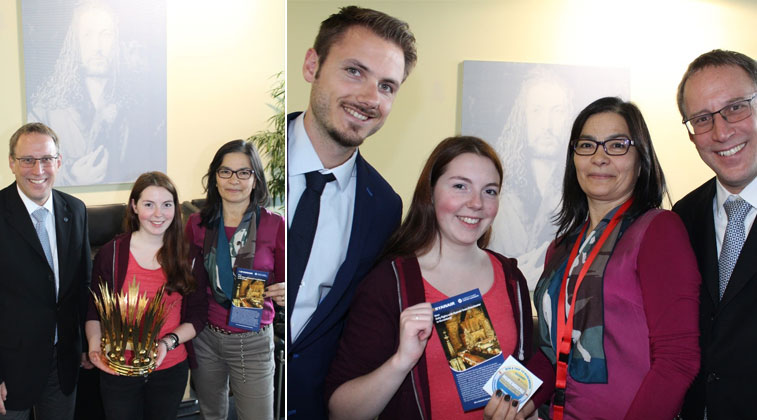 Could you be in with a chance to win a trip to Nuremberg for this year’s Christmas market? The opening of the Nuremberg Christkindlesmarkt, always on Friday before the first Advent, is an impressive event, both for Nuremberg inhabitants and tourists from Europe and abroad. TV-teams report this pre-Christmas event to countries all over the world. People throng the Main Market Square between the Christmas Market stalls. The Christkind officially opens the market each year, with everybody wanting to catch a glimpse of the opening. This year’s Christkind (second from left) was on her way to Manchester to promote Ryanair’s base opening, and to also give away a free pair of flights on the new route, and accommodation, to enjoy this year’s market. She also gave anna.aero a sneak peek at her crown that she will wear when opening the market. Also taking part in the promotion is Markus Leopold, Marketing & Sales Executive DACH & Corporate Sales, Ryanair (left). To enter the competition, do so at the following link. The closing date is 17 November.