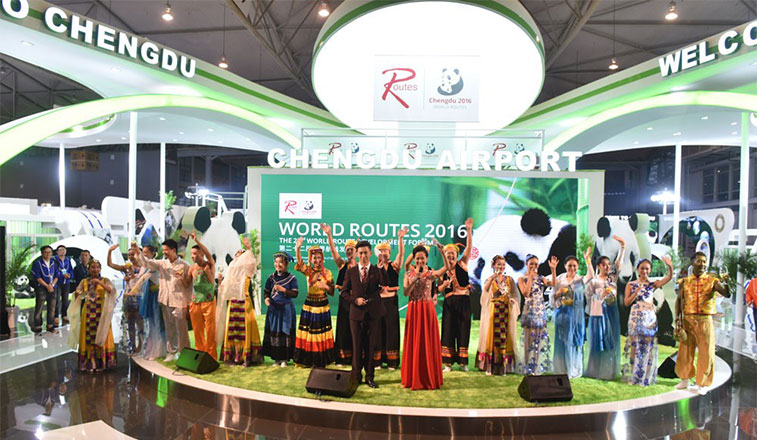 Chengdu was the venue for the recent World Routes event. Analysis of OAG data shows that the airport is the fastest-growing in the world this November as measured by additional seats compared with last November. China’s airports fill eight of the top 20 places and China’s airlines five of the top 10 places for rapid growth this winter, resulting in China’s airports handling three times as many extra passengers this November as any other country.

The start of the so-called winter season (W16/17) began on Sunday 30 October. While for those in the southern hemisphere it is really the start of their summer season, with the majority of air travel taking place in the northern hemisphere the aviation industry typically calls the next five months (until the end of March) the winter season. It is a time when many airlines change their schedules to reflect the seasonal nature of demand, but despite demand usually being lower during the winter season, many airlines around the world use it as an opportunity to launch new services, as well as to discreetly drop some underperforming routes.

Once again we have decided to analyse OAG schedule data to determine which airlines, airports and countries have seen the biggest growth in net seats for the second week in November compared with the same period in 2015. However, these results should be treated with care as they are only a snapshot, comparing across individual weeks. A similar analysis say for the second week of December would produce different figures, but overall the rankings would likely be pretty similar.

The airport with the biggest net gain in weekly seats at the start of the winter season is a slight surprise. Chengdu Airport in China is seeing growth of almost 40% which equates to an additional 150,000 departing seats. However, closer inspection of last year’s data shows that for 20 days between 26 October 2015 and 14 November 2015 the airport’s seat capacity (and number of flights) was down around 15% compared with the preceding and subsequent periods. The same pattern exists for the biggest airlines serving the airport suggesting it was some kind of operational issue. Even without this reduction in capacity last November Chengdu would still rank among the top three fastest-growing airports this winter. 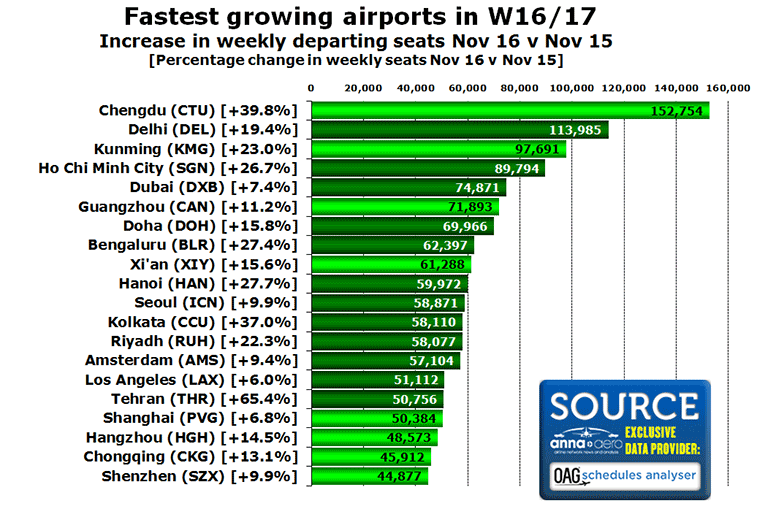 Chinese airports (shown in bright green) account for eight of the 20 fastest-growing airports. India has three airports in the top 10 (Delhi, Bengaluru and Kolkata) while Vietnam has two (Ho Chi Minh City and Hanoi). The remaining seven airports are spread across seven further countries (Iran, the Netherlands, Qatar, Saudi Arabia, South Korea, the UAE and the US).

IndiGo growing even faster than Ryanair

Leading the way for airline capacity growth this winter is India’s biggest domestic airline, IndiGo. The airline recently started acquiring its first A320neos and is helping to grow traffic significantly in the Indian market thanks to capacity growth of almost 35%. Europe’s biggest (U)LCC Ryanair is beaten into second place despite growth of almost 14%. It recently announced passenger growth of 13% in October and a load factor of 95%. The next three places all belong to Chinese carriers (shown in bright green), whose figures are all slightly higher than would be expected because of the previously mentioned issue surrounding Chengdu capacity last November. 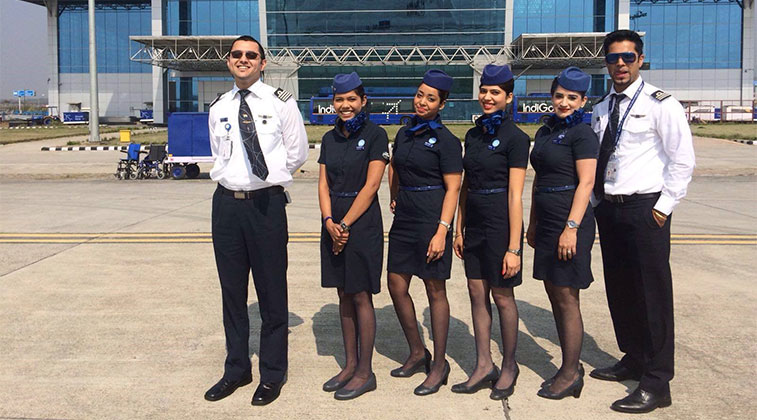 Most of IndiGo’s growth this winter has come from increased frequencies on existing routes rather than new routes, but back in March the LCC did start thrice-daily flights between Delhi and Dehradun. IndiGo operates around 150 routes this winter compared with approximately 130 this time last year.

Two of the big Middle East carriers, Emirates and Qatar Airways, both make the top 10, as does another carrier from that region, Saudi Arabian Airlines. Rounding out the top 10 are two additional Chinese carriers, Lucky Air and Air China. The airlines ranked 11th to 20th are a broad mix from state-owned national airlines (Aeroflot, Air Canada and Vietnam Airlines) to LCCs based in India, Malaysia, Mexico, Saudi Arabia and the UK, as well as Xiamen Airlines and Iran Aseman Airlines. The long-established Iranian carrier is again a bit of an oddity as according to OAG data it virtually stopped operating between November 2015 and mid-February 2016. 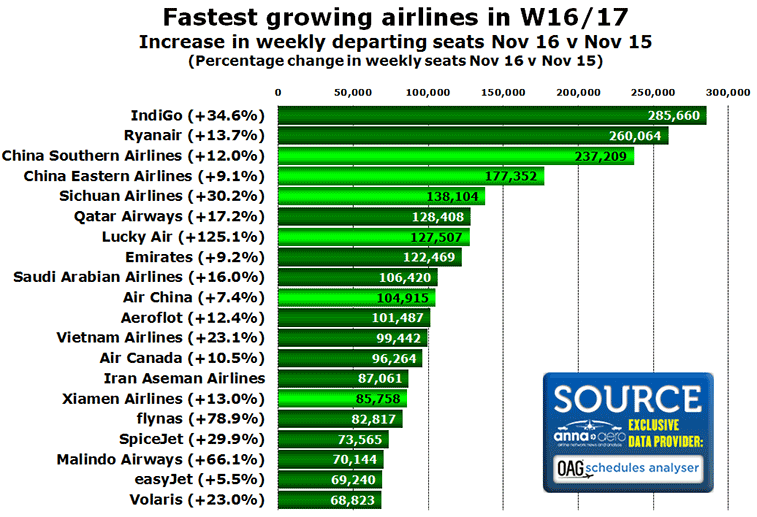 China booming as India beats US

No surprise here that China is by far the fastest-growing country market in terms of additional weekly seats, growing three times faster than any other country. India’s booming air travel market sees it growing faster than the US, with Vietnam some way behind in fourth place. Eight European countries make the top 20 with Spain leading the way in fifth place with the UK in a strong seventh place. At the other end of the scale Brazil’s weekly seat capacity is down 13%, or almost 370,000 seats, almost 10 times more than the next biggest drop of 40,000 seats in Nigeria. 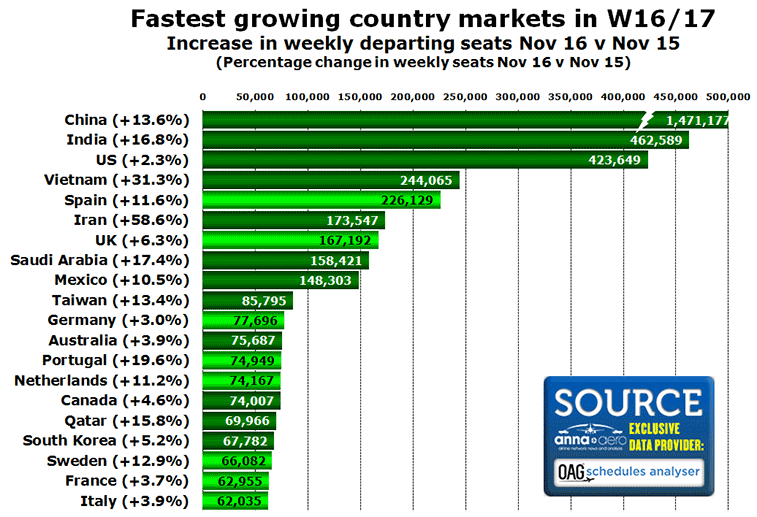 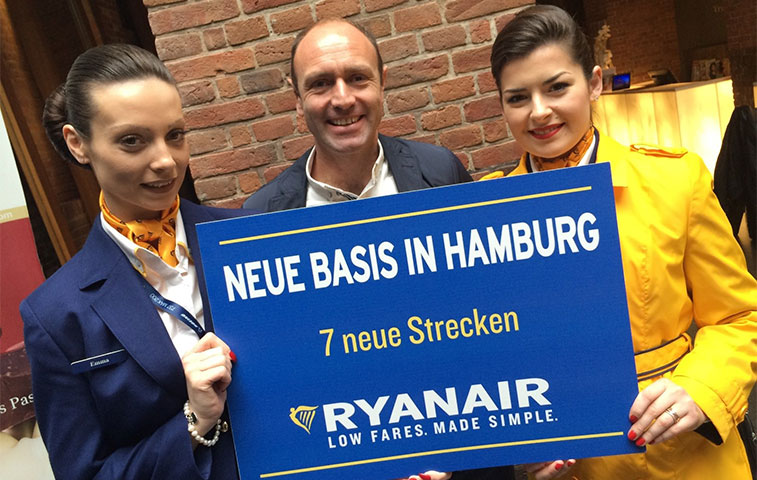 Ryanair’s expansion this winter sees the launch of several new bases, including two in Germany (Hamburg and Nuremberg) as well as several in Central Europe. Prague and Vilnius became bases at the start of the winter season while Bucharest, Sofia and Timisoara bases were activated in September.