Valencia-Budapest is “Skyscanner Unserved Route of the Week” with 100,000 annual searches; Ryanair’s 411th route in Spain?? 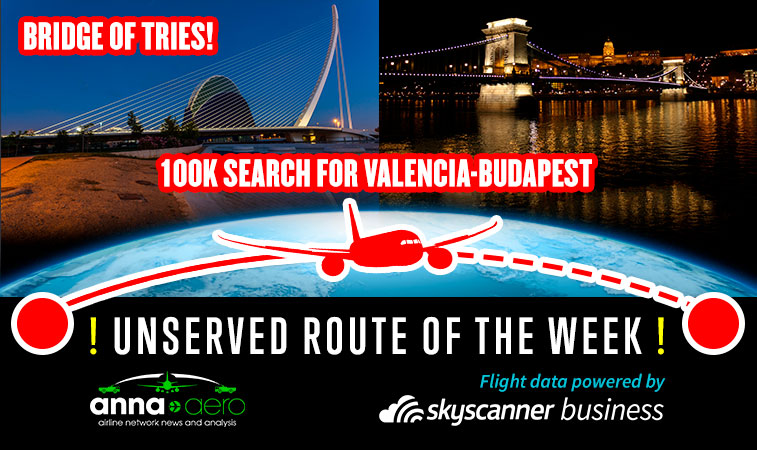 Ryanair has told anna.aero that demand for 100,000 potential passengers is the perfect number it looks for when considering a new route. So here it is Kate Sherry, Ryanair’s Deputy Director of Route Development: Valencia-Budapest! (Kate Sherry is no relation to a fortified wine made in Jerez, Andalusia.)

With 100,000 searches in the last year, a potential new route from Valencia to Budapest has been identified as this week’s “Skyscanner for Business-anna.aero Unserved Route of Week” – a powerful analysis based on aspirational data captured from the Skyscanner.net flight comparison site used by +50 million unique visitors per month. “The potential between Valencia and Budapest is huge; the numbers of indirect traffic are doubling year-on-year. Both cities can get business and leisure traffic with this route year-round,” suggests Miguel Angel Perez, Aviation Manager, Valencia Tourism. “Valencia is the fifth largest O&D pair from Budapest in mainland Spain, after Madrid, Barcelona, Alicante and Bilbao,” adds Balázs Bogáts, Head of Airline Development, Budapest Airport. 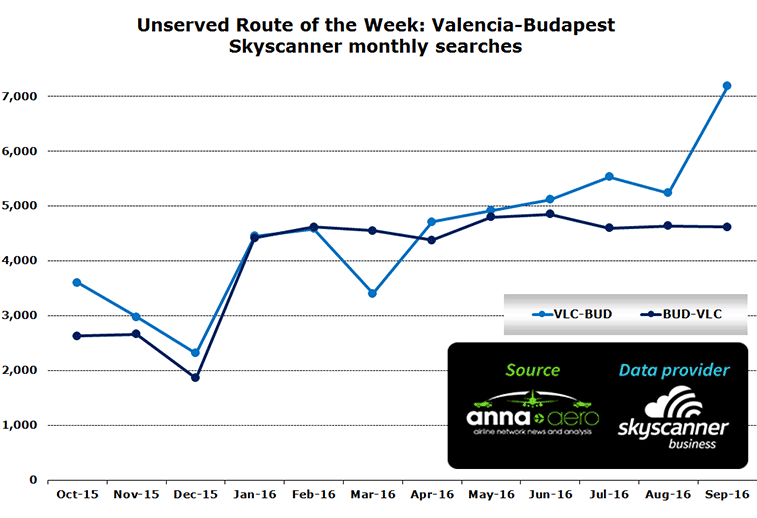 anna.aero recommends Ryanair or Wizz Air to start this route

Skyscanner demand on this route demonstrates an almost a 50/50 split, but slightly in favour of Valencia, so the potential carriers at the Spanish end of the route were therefore considered first. Europe’s biggest LCC, Ryanair, is currently the largest airline (31% share) at Valencia in terms of weekly seat capacity, according to OAG schedules data for the week commencing 1 November. The carrier currently operates to 410 routes within or from Spain, including 27 from Valencia, so will this city pair be route #411?

In terms of other Eastern and Central European cities currently flown from Valencia, its 36th biggest operation in terms of weekly seats, Ryanair also serves Warsaw Modlin and Craiova in Romania. “I compare the potential on this route with the Prague route, where we started with twice-weekly frequencies in the summer season, and where we now have daily services for most of the summer and twice-weekly most of the winter season,” adds Angel Perez. “For Valencians Budapest is a very attractive destination, and we are convinced that Valencia would also become a popular Mediterranean city-break destination for Hungarians.”

Other possible airlines at Valencia which might operate this route are somewhat limited, as the #2 airline at the airport, Iberia (13% seat share), only flies one summer-only sector from Spain to Budapest at the moment, a link from Madrid to the Hungarian capital. The third-largest airline at the Spanish airport is Vueling (12.6% seat share), which is at least flying to Budapest at the moment, with a weekly service from Barcelona. So perhaps this is also a viable opportunity for the IAG-owned carrier.

Contemplating the Hungarian end of the city pair, Wizz Air is the #1 carrier at Budapest (27% seat share), operating over 40 routes and offering nearly 34,000 weekly seats. The ULCC carrier currently offers seven Spanish cities from its second biggest base (behind its non-base at London Luton), namely to Barcelona and Madrid (four times weekly), Malaga and Tenerife South (twice-weekly), Fuerteventura, Lanzarote and Alicante (weekly). “Spain is becoming the number one holiday destination in the Hungarian market. The country pair is forecasted to reach 600,000 round trip passengers in 2016, after reaching 503,000 in 2015,” says Bogáts. Wizz Air’s nemesis and fellow ULCC Ryanair is the #2 player at Budapest (17% seat share), so again the Irish behemoth is well-positioned to take advantage of this unserved route, should Wizz Air not get there first.

When looking at the previous 12 months of search data, the busiest month for potential traffic flows (for both directions on the route combined) is September 2016, with nearly 12,000 Skyscanner searches, nearly 8,000 higher than the lowest monthly figure, which was recorded in December 2015 (4,100 searches). The seasonality profile of this search data is less extreme than the last Unserved Route of the Week (Atlanta to Tel Aviv) with the low-month traffic representing 35% of the highest month. According to OAG Traffic Analyser, because there is no direct service, the top three connecting options chosen by those passengers who did book travel between Valencia and Budapest in the past year indicates that the majority of connecting passengers use Frankfurt (24%), Zurich (17%) and Munich (12%). “In 2016, our figures indicate that nearly 10,000 round trip passengers are expected to commute between Valencia and Budapest [via intermediate points], despite the direct flight to Alicante. Since 2012, this traffic volume has increase by 70%,” confirms Bogáts.

An O&D that is not served by a non-stop flight will typically display a low purchase rate and low traffic. In this instance Skyscanner’s Travel Insight indicates a monthly average of 3.3% for the Valencia to Budapest route (see graph below). Therefore, if there was a Valencia to Budapest route, and if bookings performed in line with the “Skyscanner market average” for direct services at both airports (4.4%), the airline operating this route could immediately expect an improved purchase rate of 33%, without any increased marketing spend. However, with nearly 100,000 annual searches, “two-three weekly flights would be a great business for any airline,” concludes Angel Perez. 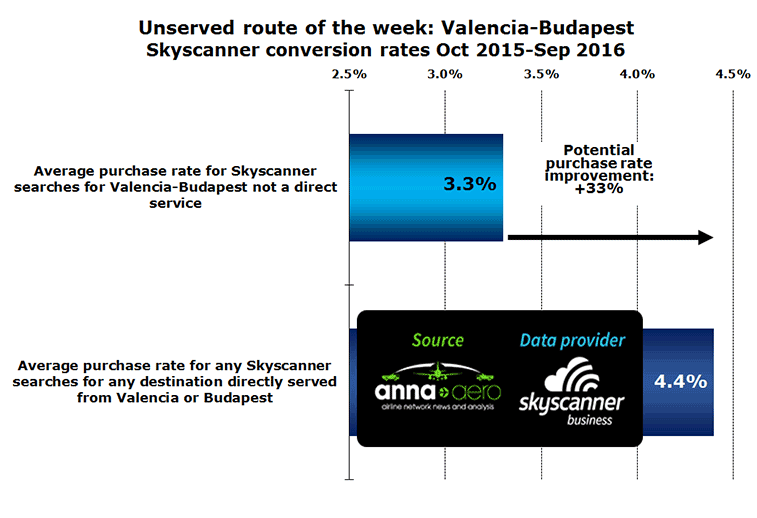