Bristol-Zurich is “Skyscanner Unserved Route of the Week”: 60,000 annual searches; route #8 for bmi regional’s base? 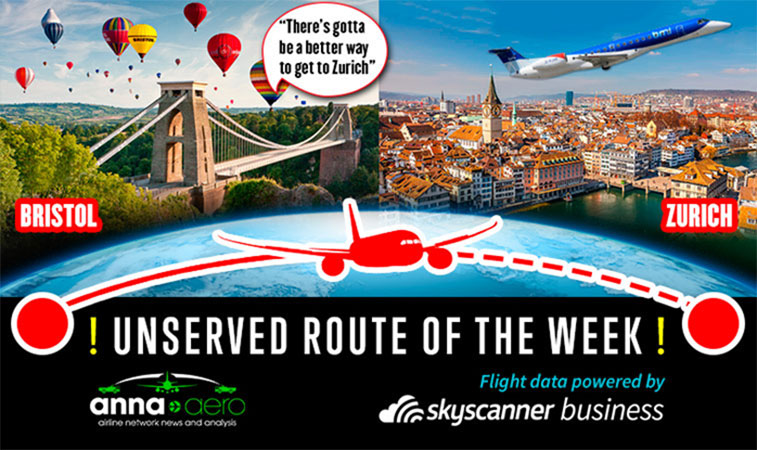 Bristol Airport, serving a city of 430,000 and an immediate catchment of 1.2 million, already reckons to lose 140,000 journeys to Zurich through leakage, mainly to London Heathrow. A link to Zurich by bmi regional would be the airline’s third connection to a Star Alliance hub.

With nearly 60,000 searches in the past 12 months, a potential new route from Bristol to Zurich has been identified as this week’s “Skyscanner for Business-anna.aero Unserved Route of Week” – a powerful analysis based on aspirational data captured from the Skyscanner.net flight comparison site used by +50 million unique visitors per month. “The Skyscanner data correlates strongly with our other sources of data, including the CAA, which shows surface leakage to/from our catchment of over 140,000 journeys to Zurich in 2015,” says Peter Downes, Head of Aviation at Bristol Airport. “Most of this traffic currently goes by road through Heathrow, so there is an opportunity, either for an existing Heathrow-Zurich carrier to cement its market share, or for a new carrier to enter the market while bypassing the slot restrictions and high charges at Heathrow.” 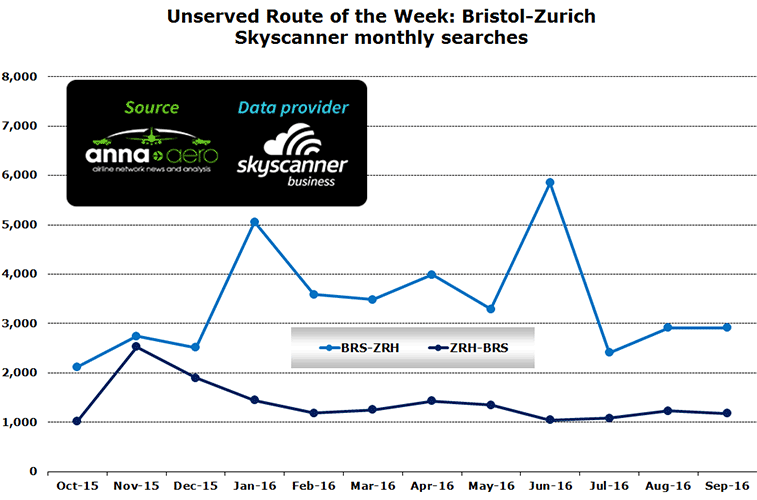 With the traffic on this route showing a clear bias in favour of the UK end – a 70/30 split – the potential carriers at Bristol were therefore considered first. Europe’s second biggest airline, easyJet, is currently the largest airline (56% share) at Bristol in terms of weekly capacity, according to OAG schedules data for the week commencing 8 November. Looking at this week’s schedules, the LCC currently operates to 40 routes from Bristol, including six times weekly to Geneva and twice-weekly to Basel. So clearly easyJet has knowledge of the Bristol-Swiss market which it can leverage should it consider trying a new Zurich sector. Indeed, it flies to Zurich from London Gatwick (10 times weekly) and London Luton (10 times weekly). These two London airports are easyJet’s biggest two UK operations, with Bristol being fourth (37,236 weekly seats), behind Belfast International (45,000 seats), and just ahead of Edinburgh (36,540 seats). On this basis, Bristol is well placed in the easyJet UK airport pecking order to attract a service to Zurich. “In 2015, the market on Bristol-Geneva was actually the largest of any UK regional airport [bigger by passenger volumes than Manchester, Birmingham or Edinburgh], highlighting the very strong overall demand that exists between Bristol and Switzerland,” adds Downes.

Other possible airlines at Bristol to operate this route include #2 airline Ryanair (20% seat share), however the ULCC does not fly any sectors into Zurich at this time (but then a couple of weeks ago it wasn’t flying from Frankfurt either!). It does however have some experience in the Swiss market, offering a five times weekly service from London Stansted to Basel and a thrice-weekly operation from Dublin to Basel – its two biggest bases. The third-largest carrier at Bristol is bmi regional, with 10% of weekly capacity. It presently serves seven destinations from the airport – Frankfurt (18 times weekly), Munich (13), Paris CDG (11), Aberdeen (11), Düsseldorf (nine), Hamburg (seven) and Milan Malpensa (three). In the humble opinion of our data elves, a double-daily Zurich connection with a SWISS code on the service would be the perfect addition to its current network portfolio.

Contemplating the Swiss end of the city pair, SWISS is the #1 carrier at Zurich (54% share), operating 75 routes and offering nearly 180,000 weekly seats. The flag carrier currently offers four UK cities from its home-hub, namely London Heathrow (49 times weekly), London City (37), Manchester (14) and Birmingham (12). Bristol is currently the ninth largest airport in the UK, but there are three bigger airports – London Stansted, Edinburgh and Glasgow – which also do not have a year-round Zurich service at present (although the Scottish capital was served by Edelweiss Air during S16), so competition would be fierce in terms of attracting SWISS to expand in the UK. “It’s worth highlighting the hub potential over Zurich – with no MEB3 services due to Bristol’s runway length, SWISS would have a great opportunity to build on the strong Lufthansa Group presence at Bristol ‒ thrice-daily Brussels with Brussels Airlines, thrice-daily Frankfurt and twice-daily Munich, both bmi-operated with LH code,” suggests Downes. “I have no doubt it would be able to develop onward connections on its Far East network with no MEB3 competition on its doorstep.”

When looking at the previous 12 months of search data, the busiest month for potential traffic flows (for both directions on the route combined) is June 2016, with nearly 7,000 searches, nearly 4,000 higher than the lowest monthly figure, which was recorded in October 2015 (3,100). The seasonality profile of this search data is less extreme than the last Unserved Route of the Week (Valencia-Budapest) with the low-month traffic representing 46% of the highest month. According to OAG Traffic Analyser, because there is no direct service, the top three connecting options chosen by those passengers who did book travel between Bristol and Zurich in the past year indicates that the majority of connecting passengers use Amsterdam (72%), Brussels (18%) and Dublin (9%). Only nine airports were used by transfer passengers over the last 12 months.

An O&D that is not served by a non-stop flight will typically display a low purchase rate and low traffic. In this instance Skyscanner’s Travel Insight indicates a monthly average of 2.1% for the Bristol to Zurich route (see graph below). Therefore, if there was a Bristol to Zurich route, and if bookings performed in line with the “Skyscanner market average” for direct services at both airports (5.3%), the airline operating this route could immediately expect an improved purchase rate of 156%, without any increased marketing spend. However, with nearly 60,000 annual searches a three to four times weekly service should be immediately viable for the airline selecting to start this potential city pair. 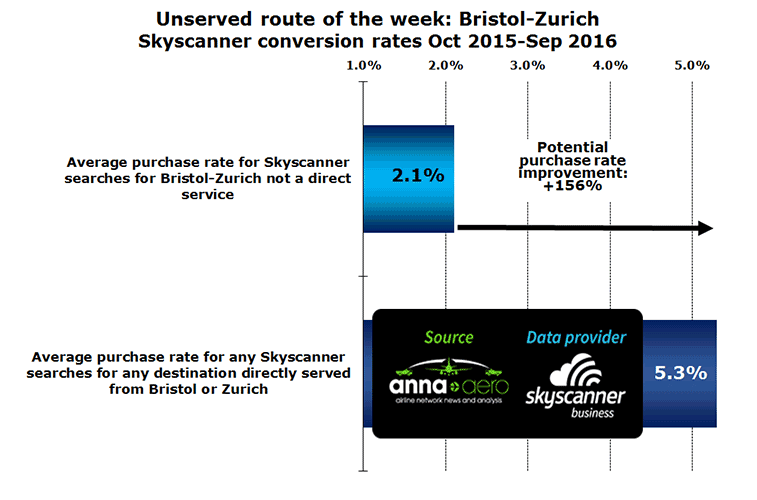