Aer Lingus has its lowest share of Dublin capacity in 10 years, but is flying more seats than ever 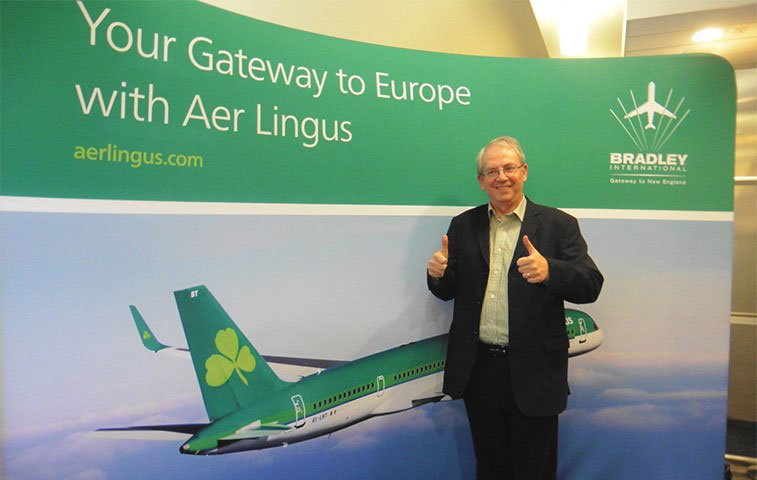 On 28 September Aer Lingus connected Hartford Airport in Connecticut in the US to Europe again, with a four times weekly service from its Dublin hub – our Chief Analyst Ralph Anker gave the inaugural flight his official thumbs-up. In 2016 the IAG airline will fly nearly six million seats from its biggest base, although it is not the biggest airline at the airport – its nemesis Ryanair is.

Since anna.aero last examined Aer Lingus home-hub in Dublin back in October 2008, the airline has moved into the IAG stable of airlines, having been part-owned by its nemesis and other main tenant at the Irish capital city airport Ryanair. In the week commencing 11 November, it is operating flights to 54 destinations across Europe and North America, far less than the 78 it flew during S16. The airline’s ‘peakiness’ during the summer season has become more pronounced since 2006, when the quietest month’s share of the busiest month (February vs. August) was 81%, whereas this year it has tumbled to 66% (February vs. July). This year’s result has actually improved over 2015 figures (which was only 63%), although this may be due at least in part to 2016 being a leap year. 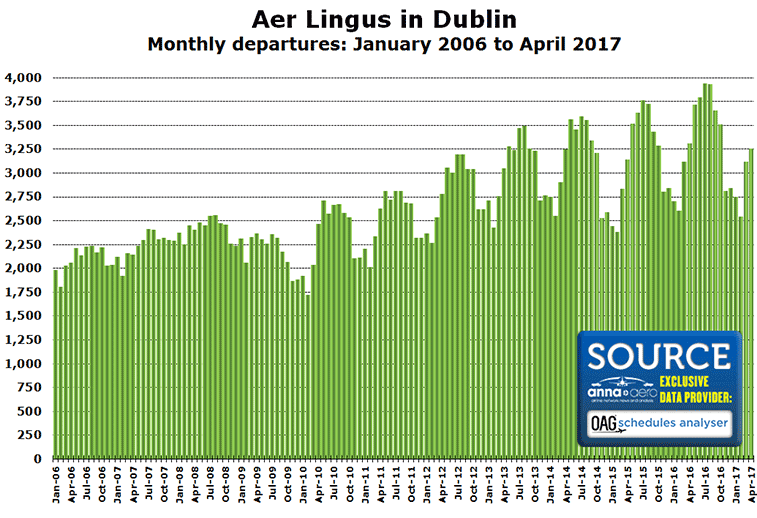 Looking at annual seat capacity for the period 2006 to 2016 shows that Aer Lingus was the #2 airline at Dublin until 2011, when it swapped places with #1 Ryanair. The ULCC had reduced its annual capacity from its 2008-high of 6.78m to 4.6m seats in 2012, due in part to the economic malaise impacting on discretionary travel in a severely affected Ireland, and the airline’s capacity revolt towards the Irish Government’s short-lived foray into levying air passenger duty. Aer Lingus’ steady growth from its 2010-low of 4.77m to nearly six million in 2016 (with 2014 briefly being a blip year), combined with Ryanair’s problems above, meant that the Irish flag carrier was #1 until 2015, when the ULCC stole back the crown. So with both carrier’s on a growth path again at Dublin, and even with Aer Lingus’ record seat count this year, the airline’s share of capacity (35.7%) is actually lower than its previous lowest share achieved during the period ‒ 35.8% recorded in 2006.

Between 2006 and 2016, British Airways left the market in 2008, only to return in 2013 following its acquisition of bmi, then a major player in capacity at Dublin. The only other constant presence in the top five along with Aer Lingus and Ryanair has been Lufthansa, whose share has grown from 1.1% in 2006 to 1.6% in 2016, having peaked at 1.7% between 2013 and 2015. By contrast Emirates, which made it into the top five for the first time last year, has only been serving the airport since 2012. 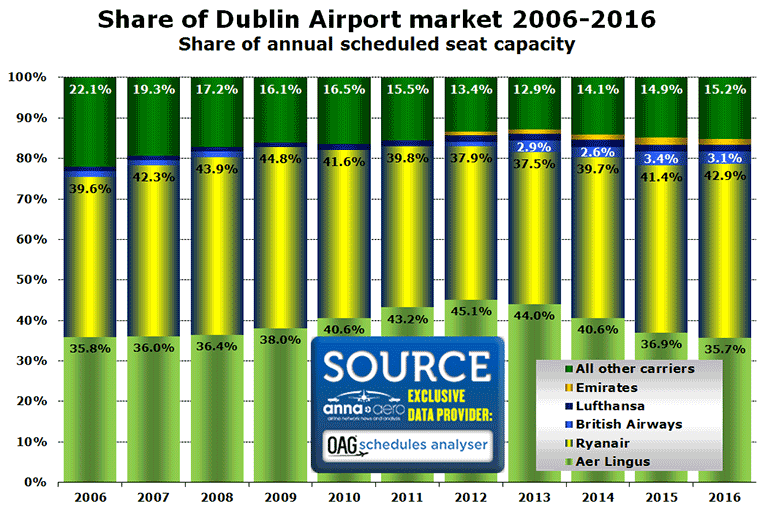 The importance of Aer Lingus’ network of UK points, which was 17-strong in S16 and now offers 13 in W16/17 (with Cardiff, Doncaster Sheffield, East Midlands and Jersey being the reductions), is clear to see, as these destinations maintain around one-third of the carrier’s seats year-round. During the summer season the more leisure-oriented country markets put in a stronger performance ‒ Spain (12.4%), France (8.3%) and Italy (6.0%) ‒ than they do in the winter, with more business-oriented nations, like Germany, having a more balanced year-round programme. 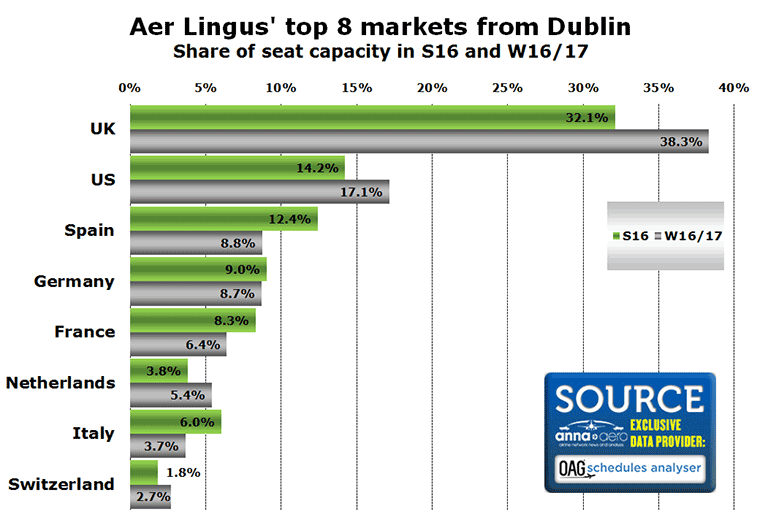 This year has already seen the addition of new routes to Murcia, Los Angeles, Pisa, Montpellier, New York Newark and Hartford, S17 sees three new routes by Aer Lingus from Dublin at this time – a thrice-weekly Miami service planned to begin on 1 September, as well as new connections to Split and Porto. Looking at the profile of route additions, more European leisure destinations, as well as further US capacity would seem to be the logical choice if the airline follows its recent route development strategy.

London Heathrow is #1 route; Ryanair competes on 80% of routes

All of Aer Lingus’ top 15 routes during the peak summer period are served with double-daily flights. Five routes are served with more than four daily flights. Out of Aer Lingus’ top 15 routes by weekly departures, Ryanair competes directly on 80% of them, with another carrier competing on the three routes where the Irish ULCC is not present – London Heathrow (British Airways), Paris CDG (Air France) and New York JFK (Delta Air Lines and American Airlines). In total Ryanair provides direct competition on 30 of Aer Lingus’ 78 routes operated during the summer season. 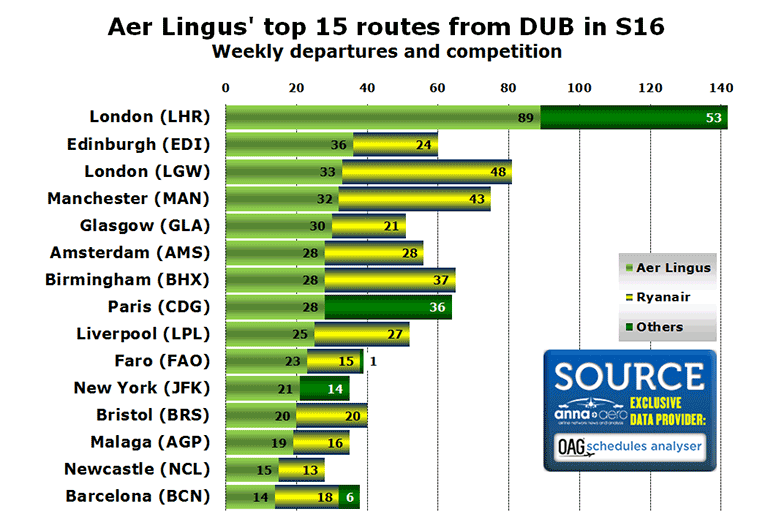 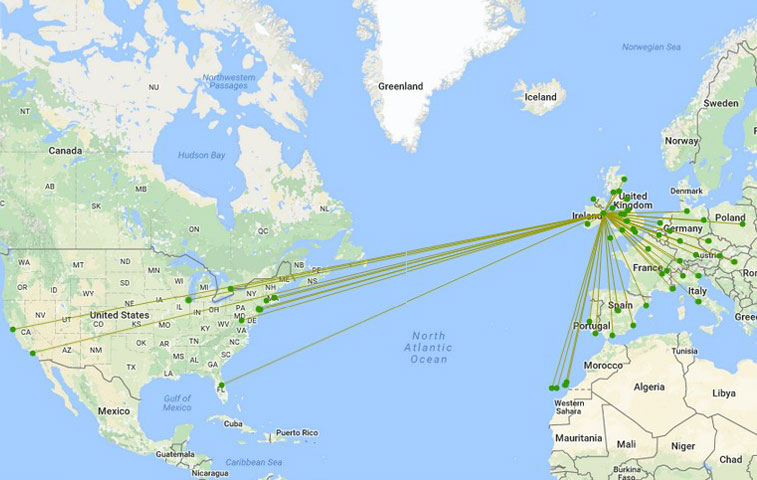 Aer Lingus’ network from Dublin this winter includes flights to 17 countries. For S16 the same 17 nations were operated to, along with services to Bulgaria, Greece and Turkey.