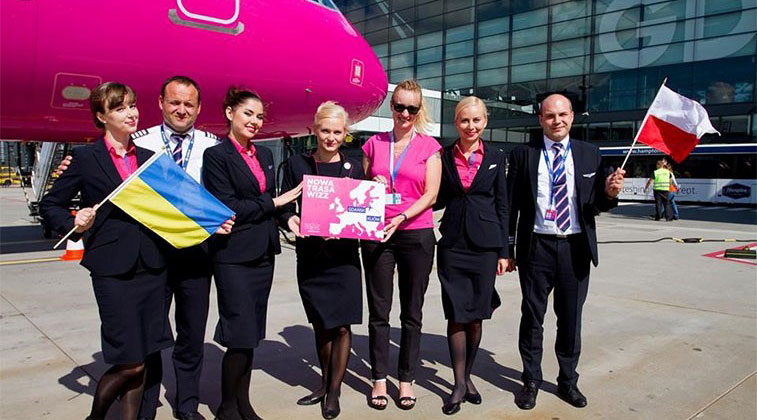 On 2 August Wizz Air inaugurated flights between Gdansk and Kiev Zhulyany, a route that is served by the ULCC twice-weekly. Since 2007, Wizz Air’s market share at Gdansk has grown 10 points from just under 37% to 47% this year, cementing it as the number one carrier at the airport.

Gdansk is a Polish city on the Baltic coast, the capital of the Pomeranian Voivodeship and Poland’s principal seaport. As of 2014, Gdansk and its metro region has a population of 1.08 million, making it the fifth largest metro region in Poland after Warsaw, Katowice, Krakow and Lodz. The business case for investing in Gdansk is looking very positive. A recent article in the Huffington Post highlighted that the number of employed people in the region surrounding the city grew by more than 40% between 2006 and 2016. This is in comparison to the rest of the EU (28 countries), where the average change was almost zero. Along with the growing economy, the tourism industry is also booming, with the city welcoming 1.06 million tourists in 2015, along with 931,000 visitors (business/VFR) according to a study conducted by the Gdansk Tourism Organisation and Brunon Synak Pomeranian Science Institute. Of the total number of guests to the city last year – 1.99 million – nearly 23% were from international markets, with Germany, Scandinavia and the UK being the top three. This news is not only positive for the city, but also for the airport which serves it – Gdansk Lech Wałęsa Airport.

In 2000, Gdansk handled 0.58 million passengers through its facilities. The airport welcomed just over 3.7 million in 2015, representing an increase in annual traffic of 533% during the 17-year time frame analysed. Last year’s traffic level increased by just under 13% when compared to 2014, with the average year-on-year change in traffic since the millennium being 16.2%. As can be seen, the biggest increases came post-2004, the year in which Poland was welcomed into the EU. 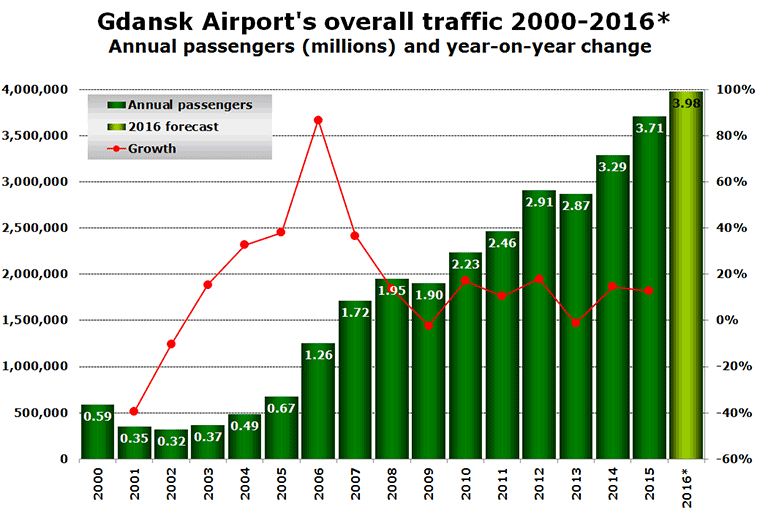 For the eight-months between January and August this year, traffic at Gdansk is up by 6.4%, with 2.67 million passengers travelling through the airport’s terminal in this period. The average month-on-month increase year-to-date is 7.3%. Taking these figures into account, and assuming that they are maintained for the remainder of 2016, then Gdansk expects to welcome between 3.94 and 3.97 million passengers. When putting Gdansk’s monthly passenger data for 2015 into anna.aero’s Seasonal Variation in Demand (SVID) calculator, the airport performs well, generating a score of 5.52 – a ‘Good’ rating – just behind Warsaw Chopin, which scored 5.42.

Wizz Air has been the largest carrier from Gdansk each year since 2007, with Ryanair having overtaken LOT Polish Airlines to become the airport’s second largest carrier in 2010. Ryanair’s market share has risen from a little under 13% in 2007 to 25% this year, while its own capacity has grown 357% from 133,000 annual one-way seats in 2007 to 608,000 for 2016. Wizz Air has grown from 382,000 one-way seats 10 years ago to 1.14 million this year, producing an increase in capacity during the past decade of 199%. To give a better idea of how fast Gdansk has expanded in recent times, Wizz Air itself is offering more seats this year than what was available from all carriers serving the airport in 2007. Overall capacity from Gdansk has increased by 132% since 2007. However, the domination of Ryanair and Wizz Air is starting to show as the airport expands, with their combined operations accounting for 72% of capacity from Gdansk this year, compared to 48% 10 years ago. Other carriers currently serving the airport, as well as those identified above, include Lufthansa, SAS, Norwegian, Finnair, Travel Service Polska, Corendon Airlines, Ukraine International Airlines and SprintAir. 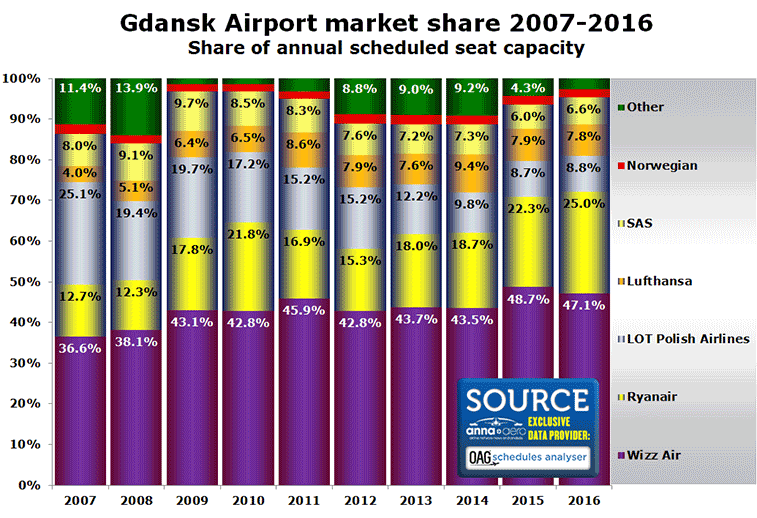 After witnessing an increase in capacity of 134%, a result of Ryanair moving its Polish capital connection from Warsaw Modlin to Warsaw Chopin, the link to Poland’s largest airport remains the number one route from Gdansk. On 4 October Ryanair moved its twice-daily operation to Chopin, while also increasing the frequency to thrice-daily, marking a return to Chopin after a seven-year hiatus (it should be noted Ryanair also served Chopin in 2013 when Modlin was closed for runway repairs). The route is also served by LOT Polish Airlines with six daily flights. Along with Chopin, the other two airports within the top 12 (highlighted in light green) to welcome a three-digit increase in capacity are Krakow and Milan/Bergamo. London Luton, Munich and Frankfurt (highlighted in red) are the only routes in the top 12 to see capacity cuts when compared to the same period last year. 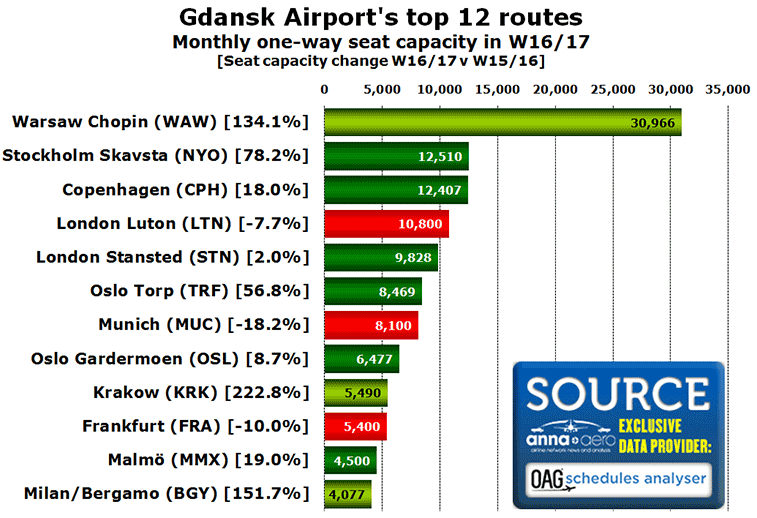 During the past 12 months Gdansk has welcomed six new airports to its network, while four have also been dropped. The largest of the new airports is Hamburg, however this gain is a result of Wizz Air moving its operations in the German city to the main airport from Lübeck, so technically it is not a new destination. Taking Hamburg out from the equation, the two biggest new routes are Belfast International (28th largest route) and Newcastle (39th). Both of these destinations were launched by Ryanair in recent weeks. The final three new destinations to grace the departure boards of Gdansk are Kiev Zhulyany (45th), Stockholm Arlanda (47th) and Radom (50th). Along with Warsaw Modlin and Lübeck, the other two routes to be dropped from Gdansk during the past year are Oslo Rygge and Berlin Tegel. Overall Gdansk is connected to 50 destinations this winter.

With Ryanair’s recent development from Gdansk in regards to its two new UK routes, anna.aero looked into its databases to discover what routes have been operated by the carrier from the Polish city, but are no longer. They include Bremen, Brussels Charleroi, Düsseldorf Weeze, Eindhoven, Frankfurt Hahn, Girona, Liverpool, Oslo Rygge, Shannon and Wroclaw. Although Shannon was only operated for one season (W08-S09), recent data suggests that the Irish city is one of the most popular unserved routes from Gdansk (more detail below).

Amsterdam is #1 unserved route from Gdansk

Looking at OAG Traffic Analyser data, the number one unserved market from Gdansk is Amsterdam. The route was last served by eurolot before its demise in April 2015 on a four times weekly basis on its Q400s. According to data, over 28,000 passengers travelled between Gdansk and Amsterdam between October 2015 and September 2016, representing around 40ppdews (Passengers Per Day Each-Way). Could this be a sector that is a tempting offer for KLM? With this level of demand without a direct service, and the strong possibility of stimulating demand between the two points with a direct flight, as well as connecting traffic, it does present a feasible business case. During the 12-month period analysed, the number one connection point for traffic between the Poland-Netherlands city pairing was Warsaw Chopin (41% of connecting traffic), followed by Copenhagen (28%) and Munich (17%). 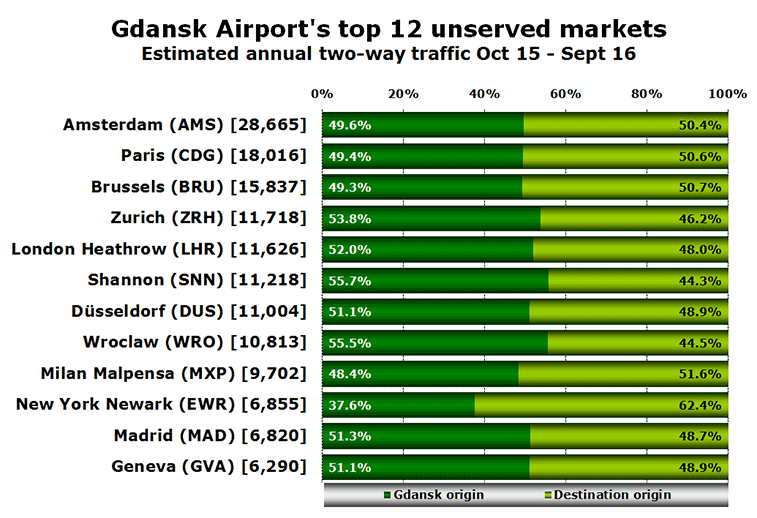 From the top 12 unserved routes, 11 of them are in Europe. The only non-European destination that is unserved from Gdansk is New York Newark, however the current estimated traffic levels only represent approximately nine daily passengers each-way.

While there are many route possibilities for Gdansk, there are some that have already been confirmed for next year. On 14 January Wizz Air will begin seasonal flights to Grenoble, while in March Ryanair will commence services to Växjö, a sector planned to operate twice-weekly (Thursdays and Sundays). Finally SAS will link Gdansk to Bergen from the end of March. 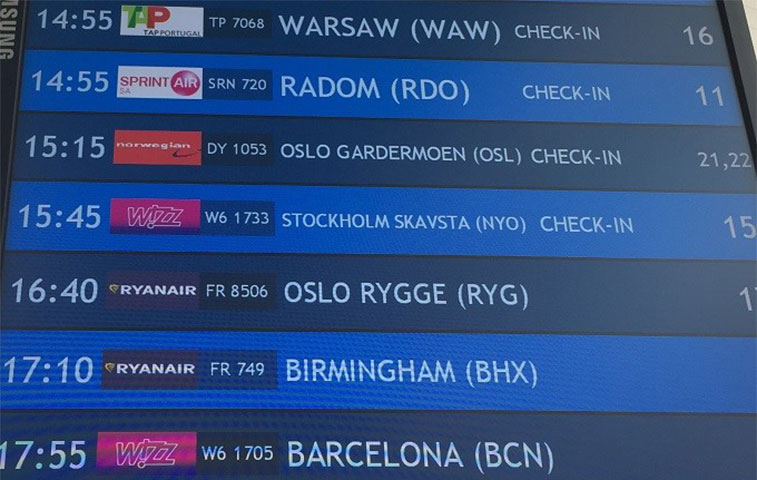 One new destination on the board at Gdansk is Radom, a route launched by SprintAir in mid-April. After welcoming Radom to its network, Gdansk is connected to 50 destinations this winter.