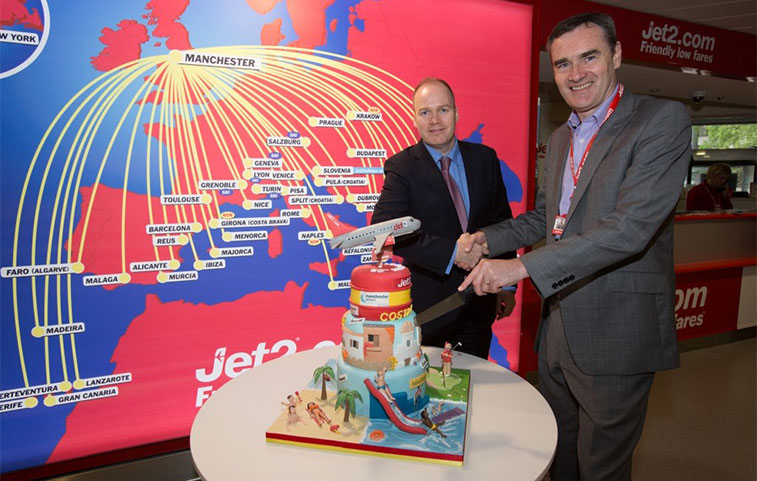 The UK-Spain market is the third biggest international country pair this winter by flights and seats and seventh biggest by ASKs. Compared with last winter the market has grown by over 12% for flights and seats and by 15% for ASKs. UK leisure airline Jet2.com is the seventh biggest airline in the market with almost 7% of seat capacity this winter, well behind the leaders Ryanair (26%) and easyJet (21%).

This week anna.aero takes a closer look at the biggest country pairs for international air travel this winter. We have ranked the top 15 country pairs by three different metrics; most flights, most seats and highest number of ASKs (Available Seat Kilometres). Rather pleasingly each of these produces a different ‘winner’ which should satisfy aviation trivia quiz compilers everywhere.

As the world’s biggest aviation market it makes sense that the two biggest international markets as measured by flights are from the US to the countries that it shares borders with, Canada and Mexico. Of the top 15 country pairs the US appears only twice, whereas the UK appears five times, China four times and Germany three times. Japan, South Korea and Spain also feature twice in the rankings. A further 10 countries each appears once in the top 15 rankings. Based on current OAG data, eight of the top 15 country pairs are showing a year-on-year decline in the number of flights (shown in red). Three pairs are growing by less than 2%, while just two (UK-Spain and Japan-South Korea) are registering growth of more than 10% (shown in bright green). 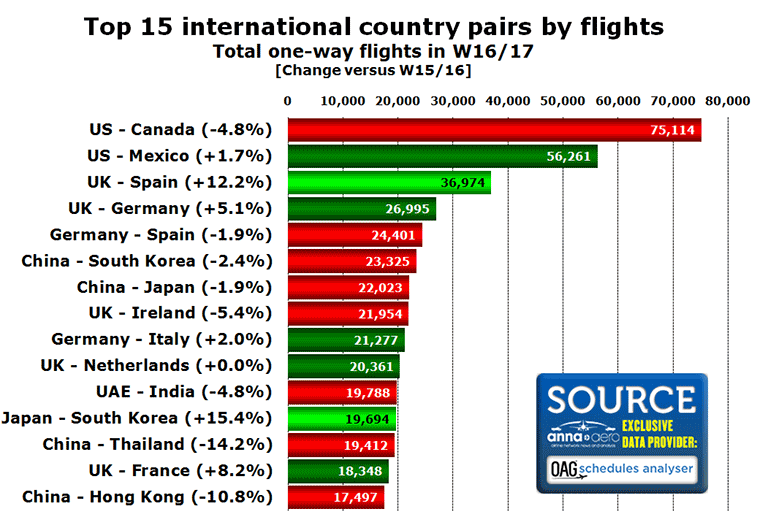 US-Mexico is top for international seats

The top three country pairs by seats are the same as for flights, with the significant difference that US-Mexico has now overtaken US-Canada because of the larger average aircraft size (140 seats per movement for US-Mexico flights versus 98 seats per movement for US-Canada flights). The UK-Spain market is now also much closer to the top two as it has an average of 183 seats per movement between the two European countries. Now 10 of the top 15 country markets are showing a decline compared with last winter. Three country pair markets are up less than 5% while UK-Spain and Japan-South Korea are once again leading the way with double-digit growth. 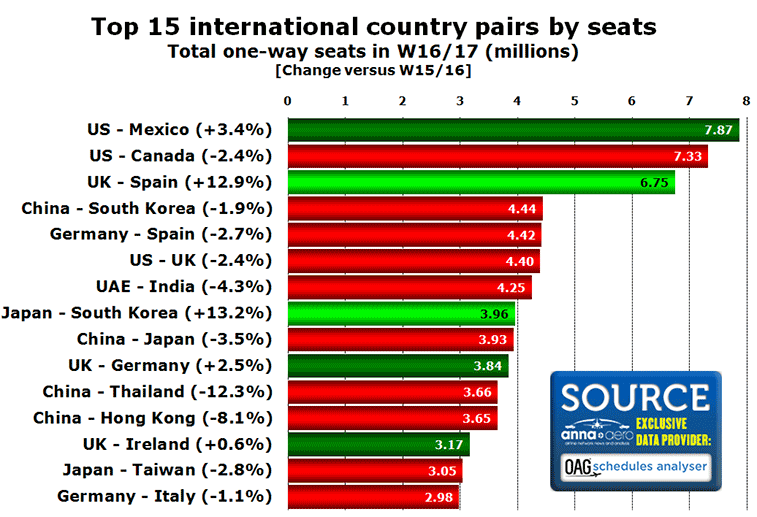 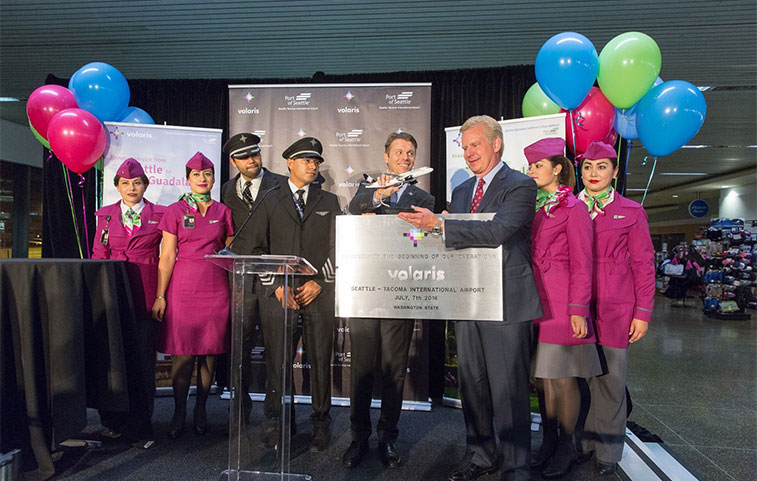 The US-Mexico market is the biggest this winter for seat capacity, extending its lead over US-Canada compared with last winter. Several carriers have launched new routes this year including Volaris which linked Guadalajara with Seattle-Tacoma on 7 July.

Once we take into account sector length (ASKs are a combination of aircraft size, frequency and sector length) the rankings change considerably. Now the US is involved in the top six pairs and 10 of the top 15. The UAE is represented in four pairings (to Australia, India, UK and the US) while the UK is represented in three pairings (to Spain, US and the UAE). Germany and Spain also both appear twice, each leaving a further nine countries involved just once each in the top 15. Just six of the top 15 country pairs are now showing year-on-year declines while US-China joins UK-Spain in reporting double-digit ASK growth.

The US-UK market is 50% bigger than the next biggest country pair market (US-China) as measured by ASKs. Given the rapid growth in the US-China market (it has overtaken US-Japan since last winter) it might be expected that this market will become the largest in the next few years. However, given the recent political upheaval in both the UK (Brexit) and the US (electing Donald Trump as the next President) the developments of both of these markets will be anything but predictable. The future of the US-Mexico market may be even less certain given Mr Trump’s views on the country. 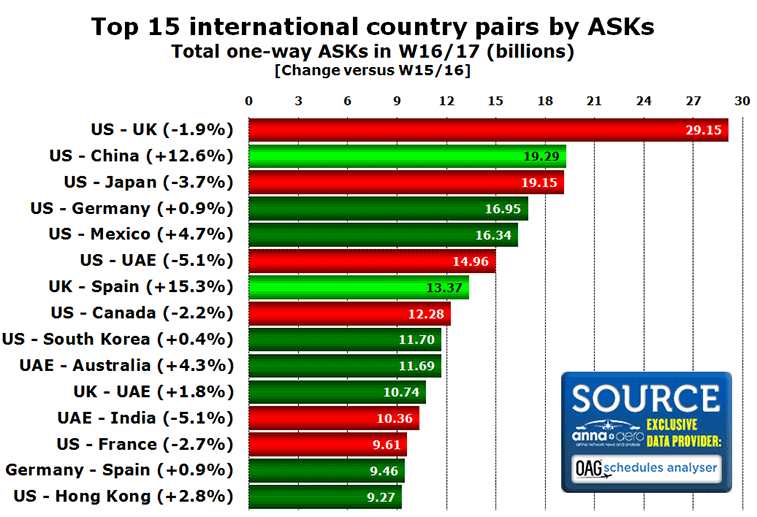 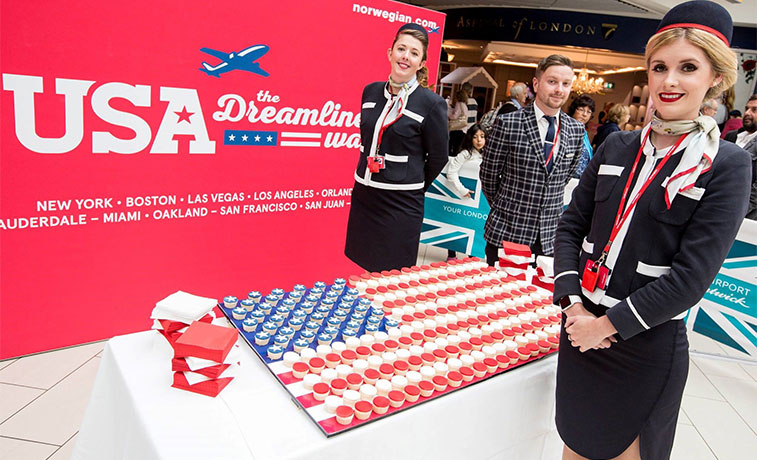 The US-UK market is the biggest international market when measured by ASKs. In fact, it’s 50% bigger than its nearest rival the US-China market. One of the carriers helping to keep the US-UK market well ahead of the opposition is Norwegian which offers flights to seven US destinations from its London Gatwick base. Its most recent route launch was to Las Vegas on 31 October.